Rohullah Nabizada, a 30-year old police officer and father of two, had returned to his duty in the provincial capital of Ghazni with the hope that peace talks between the United States and the Taliban would lead to the reduction of violence.

His hope was dashed by an explosive-laden Humvee military vehicle on May 22 this year. Nabizada became the first member of his family to lose his life to the ruthless war, already into its 18th year. Like thousands of others, Nabizada was sent back home to his mother in a wooden box.

Each morning, when the sunlight first hits remote Suka village in the Malistan district of Ghazni province, Khadija, Nabizada’s mother, cannot wash her face without crying. Her son is buried right in front of their house, on the top of a hill dedicated to fallen soldiers. The sorrow goes deep and she falls apart regularly. 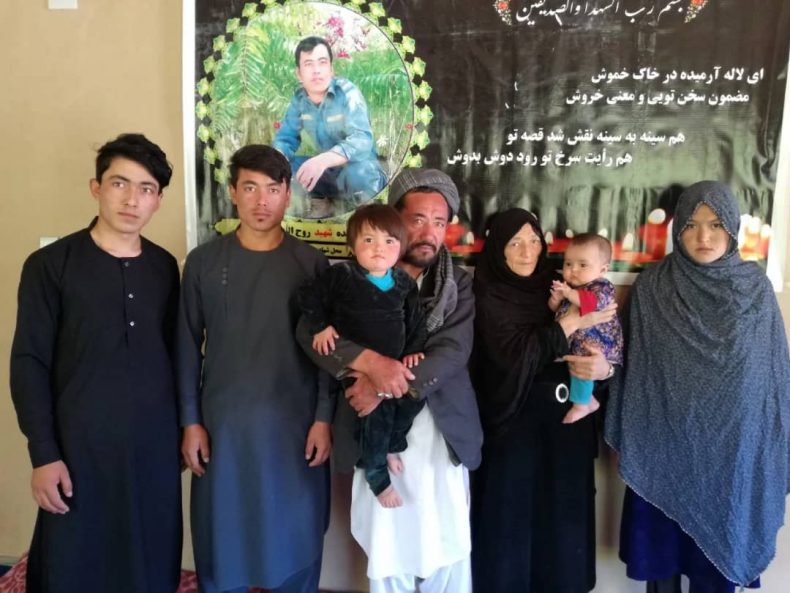 The family of Rohullah Nabizada poses for a photo. Nabizada’s parents are holding their newly fatherless grandchildren. The widowed Sabira, who married Rohullah Nabizada in 2015, stands at the far right. Image courtesy of the Nabizada family.

In July 2018, the United States opened direct talks with the Taliban with the goal of ending the war. But on the ground, the war continues, claiming the lives of members of government security forces and Taliban insurgents alike and deepening the country’s wounds. In late June and early July, violence surged across the country even as Zalmay Khalilzad, the U.S. special envoy on Afghan reconciliation, sat to talk with the Taliban delegation led by deputy chief Mullah Baradar in Doha, Qatar.

Dr. Orzala Ashraf Nemat, who directs the Afghanistan Research and Evaluation Unit, said that both the United States and the Taliban want to negotiate from a position of leverage. Thus, as Washington and the Taliban intensified their talks, they also intensified the ruthless combat across the country, Nemat explained. 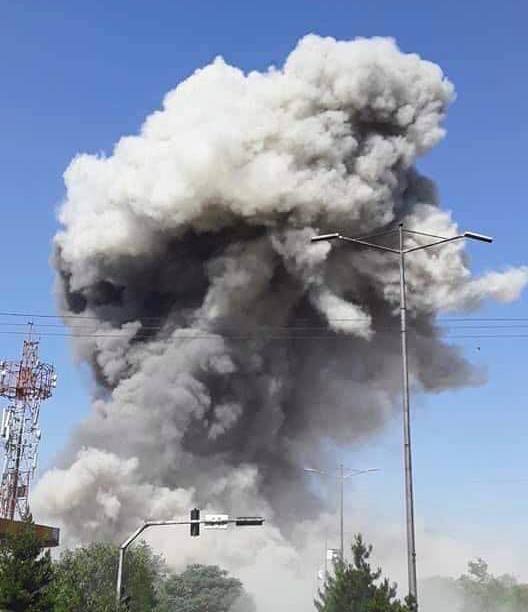 Smoke rises from the car bomb detonated in Kabul on July 1, 2019. Photo by Ezzatullah Mehrdad.

On July 1, the third day of the seventh round of peace talks between U.S. diplomats and Taliban negotiators, Taliban fighters drove a car packed with explosive devices into a military installation in the capital, Kabul. The attack sent a tower of smoke into the Kabul sky and rocked the entire city.

Following the car bomb, five Taliban fighters exchanged bullets with security forces. The attack saw students of a nearby private school caught in the crossfire, with 52 of them wounded.

On the same day as the Kabul bombing, U.S. senior diplomat Khalilzad announced an intra-Afghan dialogue scheduled for July 7-8.

After talks with the Taliban ended in Doha on July 6, Khalilzad paused negotiations so the intra-Afghan talks could take place. “The last 6 days of talks have been the most productive session to date,” said Khalilzad in a Twitter post.
But on the ground, the six days of talks coincided with bloodshed. Numerous attacks claimed the lives of scores of fighters from both sides. At least 264 pro-government forces and 58 civilians were killed in the country, the highest death toll of 2019, according to the New York Times.

On July 7, even as a select group of Afghan activists, civil society members, and Afghan politicians sat face-to-face with Taliban officials, Taliban fighters loaded a truck with explosives and drove to hit an office of Afghanistan’s intelligence service, the National Directorate of Security (NDS), in Ghazni city, the provincial capital of eastern Ghazni province.
The Taliban-claimed car bomb killed at least 14 people, including eight members of the security forces and six civilians. The attack wounded as many as 179 people, including civilians and schoolchildren attending a nearby school.

“They [U.S. officials] jump to peace,” said Daoud Naji, an independent political activist, who believes that previous peace talks failed because of the lack of a a ceasefire. “There is a fire that burns people. Are you ready to stop firing bullets for two years before any peace agreement?”

Naji called on the Taliban to come to Kabul and open an office to pursue their political interests: “Who knows, I may make a Talib [Taliban fighter] friend and they might see we are also Muslims in Kabul.”

But the Taliban group demands the full withdrawal of foreign troops before agreeing to hold peace talks with the Afghan government or declare a ceasefire.

Still, many hoped that current peace talks would result in some kind of agreement between the United States and the Taliban. Without reaching any deal over a ceasefire, the Taliban could broker a deal with the United States based on U.S. troop withdrawal and Taliban assurances that Afghanistan’s soil will not be used by terrorist groups to attack the U.S. and its allies.

“It is easy to deal with the U.S.,” said Nazar Mohammad Mutmeen, a political analyst in Kabul. “But making peace with each other in the country is much more complicated.”

The continuation of the simultaneous fight-and-talk policy between the Afghan government and the Taliban could lead to a further surge of violence across the country.

“There is a difference between the political peace process and the social peace process,” said Rahim Hamidi, a peace activist. “The more violence [there is], the less nonviolence works.”

The political peace process has limited the sphere for the social peace process to allow Afghans to come together to make peace with each other, as the intensifying war has only widened the gap between the Afghan government and the Taliban.

During the last two decades of insurgency, around 100,000 people were killed and tens of thousands were wounded. The scars of the war have reached almost every family in the country, making it harder to reconcile those who were fighting for the government and for the Taliban.

Mr. Mutmeen, who was a Taliban official during the group’s rule, said that the victims of the war from both sides want peace more than anybody. “The five members of the Taliban negotiation [team] were imprisoned by the U.S.,” Mutmeen emphasized. “Mullah Baradar [the political deputy chief of the Taliban] is a victim of the war — he was twice wounded in U.S. airstrikes, lost family members, and he was imprisoned for ten years in Pakistan.”

The victims of the war may want the end of the war, but the real reconciliation has remained far distant. Thousands have been killed by suicide bombings, airstrikes, and bullets. Wives lost husbands. Children were orphaned; parents lost their sons and daughters to the war. Sisters lost brothers and brothers lost sisters.

“The gap and wounds have widened too much,” said peace activist Hamidi, who directs a project called Mothers of Peace. “An ice mountain is between the groups involved in the war and it is going to take a great deal of work to bring people together.”

“The Afghan war has also rooted in the social structure of the country,” Hamidi continued. “The culture of revenge has driven this war so long. If you lose a family member to the violence, you seek revenge.”

For now, there is no mechanism to collect the demands of the victims and incorporate them into the peace talks, Hamidi added.

The war has dragged on for so long and caused so much pain that resolving the conflict is now far more complicated than a U.S. troop withdrawal or even an agreement between the Afghan government and the Taliban. The scars of the war remain on the hearts of thousands of countrymen. 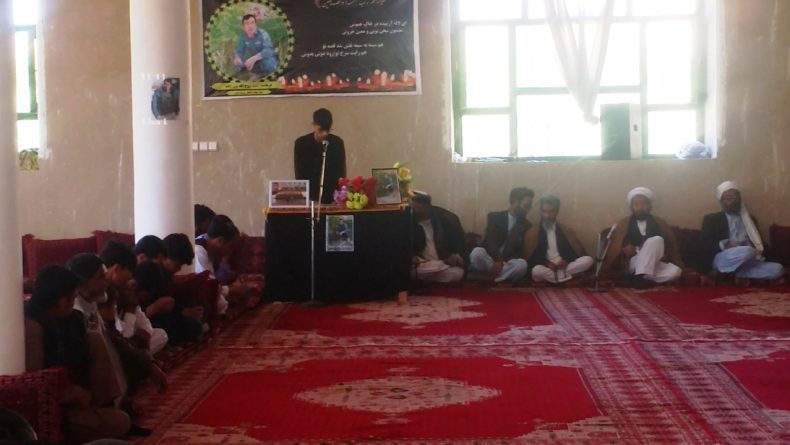 Mohammad Zia Mohseni delivers a speech during the funeral of his cousin, Rohullah Nabizada. Image courtesy of the Nabizada family.

In the case of the fallen Rohullah Nabizada, the entire family shows an intense hatred toward the Taliban insurgents. Not only his parents, brothers, and sisters but even his cousins and aunts cannot tolerate seeing the Taliban return to power.

Mohammad Zia Mohseni, a high-school student and cousin of Nabizada, woke up in the early morning to learn that Nabizada had been killed in a Taliban attack. For weeks, he could not believe his cousin was gone. He set a photo of Nabizada as the wallpaper of his smartphone.

“When I hear the name of Taliban, I feel hatred and recall the memories of my cousin,” said Mohseni. “Peace with a terrorist and barbaric group is meaningless.  Living with the Taliban in the same city and neighborhood is not imaginable.”

Ezzatullah Mehrdad is a freelance journalist based in Kabul. His work has appeared in The Diplomat Magazine, South China Morning Post, Times of Israel, and many more.

In Afghanistan’s “Land of Light,” the Taliban-government war is as much personal blood feud as political conflict.

Is the Taliban’s Former Capital Ready to Welcome Them Back?

Kandahar has come a long way since Taliban rule. What do its residents think about the peace talks?