Taiwan’s unscrupulous fishing vessel operators may begin to think twice following the September 2018 impoundment of Fuh Sheng No. 11, an illegally-operating distant water fishing vessel, by Taiwan’s authorities in the port of Kaohsiung. The patterns revealed in the vessel’s pursuit of illegal, unregulated, and unreported (IUU) fishing are common among many reports in Taiwan’s fisheries, and those of other IUU vessels around the globe. The investigation and penalties being doled out by Taiwan’s Department of Fisheries and Ministry of Labor are a significant milestone in correcting the destructive behavior of its scofflaw fishing boat operators.

However, NGOs such as the Environmental Justice Foundation, which was instrumental in bringing the boat operators to justice, remain concerned about the slowness and mismanagement of the investigation, which allowed abuses to continue for three months after the ship was first investigated by Taiwanese authorities in the South African port of Cape Town in June of this year.

Fuh Sheng No. 11 was detained by South African authorities following an inspection request dated May 17, 2018 by the Indonesian Consulate about the poor working conditions aboard the vessel. The inspection by the South African Maritime Safety Authority (SAMSA) found the ship unfit for seaworthiness and contacted the flag state of the vessel, in this case Taiwan, which sent officials to investigate the claims.

Fuh Sheng No. 11 was the first fishing vessel to be detained under the International Labor Organization’s (ILO) Work in Fishing Convention (ILO Convention No. 188, also known as C188). On June 27, the ship was allowed to leave port and continue its fishing operations, but investigators from the Environmental Justice Foundation (EJF) were not satisfied with the results. Working closely with Taiwanese authorities, EJF interviewed former crew members, Indonesian fishermen, who relayed more information about unsafe conditions, beatings, and illegal shark finning on board. The continued monitoring brought about more evidence of ongoing abuses and exploitation aboard the vessel. That led to the ship being detained in September and its operator and captain fined.

In a press statement dated October 4, Taiwan’s Fisheries Agency reported on serious punishments to be imposed on Fuh Sheng No. 11 and another vessel operating illegally, Chin Chang No. 6. The Fisheries Agency investigation found Fuh Sheng No. 11 was in violation of a myriad of crimes, including not submitting accurate catch reports, employing an unauthorized foreign crew, underpaying crews below minimum wage, forced overtime, violations of labor contracts, and failing to provide adequate living and caring services for its crew. Despite Taiwan not ratifying C188, the Fisheries Agency identified this as a major labor violation, and highlighted the global reach of the investigation into this case.

On October 1 the Fisheries Agency forwarded its findings to the Kaohsiung District Prosecutor’s office for further legal action. Although the case is still ongoing, the Fisheries Agency has already meted out its own disciplinary actions, including a fine of 3.75 million New Taiwan Dollars (NTD) (approximately $121,000) and has suspended the vessel’s fishing license for five months.

EJF’s Deputy Director Max Schmid told The Diplomat the case “is an encouraging step forward,” but expressed disappointment with the handling of environmental violations. “Unfortunately, though, they are not bringing any sanctions against the Fuh Sheng No. 11 for the very serious offence of shark finning,” Schmid said, “despite having film, crew testimony and an admission from the boat owner in the Financial Times.”

Shark finning is the destructive fishing practice of catching sharks for the purpose of only removing their fins, tossing the carcasses overboard. 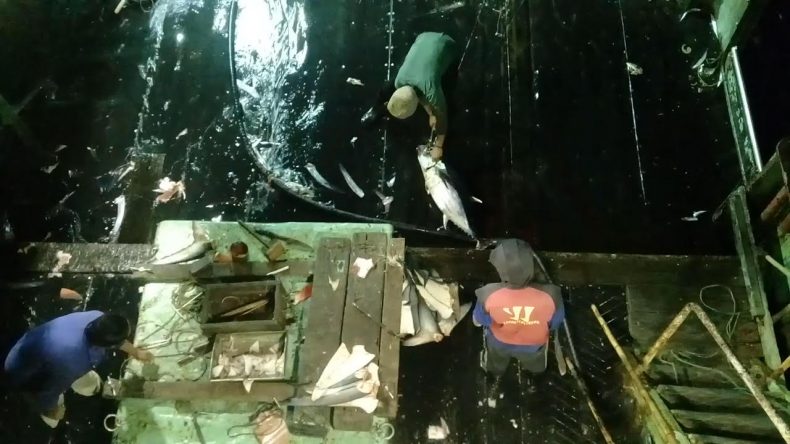 This photo taken aboard Fuh Sheng No. 11 is evidence of sharkfinning. Photo courtesy of EJF.

In a bit of irony, in a Fisheries Agency press release dated October 4 discussing the case of Fuh Sheng No. 11, another ship, the Ching Chang No. 6, is implicated for catching a large amount of prohibited silky shark species.

“We are disappointed that there will be no charges for shark finning and feel this sends the wrong message to illegal operators,” Schmid states. “It is very rare to actually find fins on vessels in port because illegal operators are careful to smuggle them off vessels before formal inspections can take place, so states need to be able to act on other forms of reliable evidence such as those that exist in this case.”

In the October 4 press release, the Fisheries Agency indicates their investigation occurred in two phases: the initial inquiry in Cape Town, followed by close observations by the Fisheries Monitoring Center aided by a partner NGO for first-hand information and updates. In contrast, EJF believes the Fisheries Agency’s initial inspection in Cape Town was insufficient and made some basic errors, which allowed the vessel to continue operating illegally for several more months before being detained in Taiwan.

Among the problems EFJ finds with the initial inspection, they say no interpreter was provided for the crew members being interviewed, and questionnaires about working conditions were given to migrant crewmembers in the presence of the captain, who is accused of overseeing beatings on board the ship.

EJF reached out to crewmembers following what they say was a “botched” investigation in Cape Town. The subsequent investigation revealed that 22-hour work days, frequent beatings, and unsafe working conditions were common. Informants also told EJF of the finning of hammerheads, a family of vulnerable and endangered sharks.

Fuh Sheng No. 11 was authorized to catch albacore in the South Atlantic Ocean. In accordance with regulations, it could only land or conduct transshipments in specific ports. Between December 2017 and September 2018 the Fisheries Agency indicates the vessel entered Cape Town and Kaohsiung ports, and while there were reports the vessel had caught and finned sharks, a lack of evidence during inspections resulted in no prosecution. Despite this, authorities were able to determine the ship had not kept accurate catch logs. Following the September investigation the vessel operator was fined 1 million NTD and the captain fined 200,000 NTD.

Taiwan has one of the world’s largest deep water fisheries — according to EJF, the export value of its fisheries ranges between $1.6 billion and $2 billion. To keep costs low, the majority of work done in Taiwan’s fisheries industry is through the use of migrant labor and an often broken brokerage system.

Data provided by the Fisheries Agency and Ministry of Labor indicate in 2016 there were approximately 26,000 migrant workers in the fisheries industry. However, a 2014 U.S. State Department Trafficking in Persons Report estimates that figure was more than 160,000. Such a discrepancy highlights the lack of transparency in the industry.

In Taiwan there is no island-wide union where migrant fishermen can address their concerns. The Yilan Migrant Fishermen’s Union (YMFU), a small union for migrant fishermen based in Taiwan’s Yilan County, is sought out by migrant fishers throughout Taiwan’s fishing industry to address grievances. YMFU provided additional information for this article, including supplemental materials from the SAMSA report from the initial Cape Town investigation, and a copy of the letter from fishermen aboard Fuh Sheng No. 11, written in broken English, which explains their safety worries and their fears for their lives.

SAMSA found many problems with Fuh Sheng No. 11 in their May inspection, which led to the vessel being detained in Cape Town. Watertight doors lacked sealing rubber, vents and hatches were painted over and sealed shut, and  occupational health and safety provisions were poor quality (including rotted life buoys) or nonexistent (there were no medically trained crewmembers on board). SAMSA also found that crew members were unable to operate necessary vessel machinery including anchors and that living condition were extremely poor. The many problems led to the ship being kept at port; the vessel was issued a fine and was released in late June.

The dire conditions still being uncovered in Taiwan’s fisheries reflects a larger, global symptom. The planet is hungry and the high seas are the most difficult place to enforce the rules. To skirt regulations, criminal elements of the global fishing industry forge documents and figures, turn off transponders when engaging in IUU fishing, establish front companies, and underpay and exploit migrant workers who are trafficked, beaten, and disappear at sea.

The growing awareness of incidents like the Fu Sheng No. 11 case is putting greater pressure on Taiwan’s IUU fishing operators and labor violators. It is also forcing Taiwan’s authorities to act. As the floodgates have opened, Taiwanese authorities have had to adapt to the increased demand for proactive law enforcement; a scenario that has led to a few missteps over basic issues such as jurisdiction. Making matters more complicated is Taiwan’s lack of international authority to take a more active and aggressive role in addressing global IUU. Taiwanese lawmakers have traditionally been wary of providing protection for non-voting migrant workers in distant fleets, and courts have ruled against complaints in the past.

With greater awareness and enforcement, cooperation with watchdog NGOs, and a clear prescription for success, the tide may be turning on Taiwan’s IUU. Although there’s still room for improvement, the case of Fu Sheng No. 11 is a sign things are heading in the right direction.

A new EJF report finds widespread violations in the global seafood industry, including in Taiwan, Vietnam, and elsewhere in Asia.

The Pacific Island states have found ways to work together in order to effectively manage their EEZs and prevent the destruction of adjacent high seas fisheries.

COVID-19 has given Kim a unique opportunity to shift his public persona from that of a military leader into more of a father figure – even as he imposes stricter policies than ever.