Last week Taiwan hosted the 2018 International Workshop on Strategies For Combating Human Trafficking (IWSCHT). While a workshop, it highlight’s Taiwan’s activity as a stakeholder in addressing global human trafficking, probably much to Beijing’s chagrin. The event was hosted by Taiwan’s Immigration Agency, and while productive, the international gesture didn’t go without protest at home.

A press release on IWSCHT indicates that Taiwan has signed Memoranda of Understanding and cooperation agreements on countering human trafficking with 17 countries; an additional MOU will be signed with a European country later this year.

In the IWSCHT press release, Taiwan’s Minister of Interior Hsu Kuo-yung stated the growth of globalization has generated greater migration, and along with it, international crime. Cultural differences, particularly in labor standards, create gaps in which exploitation and human trafficking can occur.

Although Taiwan has been ranked as a first-class country for the ninth consecutive year in its enforcement, there is more that can be done for migrant fishermen and migrant domestic caretakers and strengthen Taiwan’s role internationally.

An NGO coalition, Human Rights for Migrant Fishers, was on hand for the workshop’s opening on July 25 to protest the ongoing exploitation of migrant fishermen in Taiwan’s fisheries — a problem whose symptoms meet the definition for human trafficking.

In past months I’ve written about the plight of migrant workers in Taiwan’s industries, particularly those coming from Southeast Asia, and the lack of enforcement of labor laws. It is encouraging to hear high-level ministers address these issues, and for the most part this type of international workshop is what Taiwan needs more of in order to address these issues. However, the reality in Taiwan often slips past the legal codes.

In a press statement, the NGO coalition called for more action on the part of Taiwan’s government:

Despite this progressive action […] the country does not do nearly enough to combat exploitation and inhumane working and living conditions for the most vulnerable migrant workers: those on Taiwanese fishing vessels, and especially the distant water fishing fleet. Some of its policies even create the conditions for human rights abuses.

The United States Department of State, in its Trafficking in Persons Report for 2018 lists Taiwan as Tier 1, indicating “Taiwan authorities fully meet the minimum standards for the elimination of trafficking.” The report indicates a problem that the NGOs know full well, however: “Although Taiwan authorities meet the minimum standards, separation of purview between the Ministry of Labor (MOL) and the Fisheries Agency (FA) continued to impede efforts to address forced labor on Taiwan-flagged and -owned vessels in the highly vulnerable distant water fleet (DWF).”

In my May piece for The Diplomat, “The Dirty Secrets of Taiwan’s Fishing Industry,” I found bureaucratic inertia and confusion over legal jurisdictions created enormous gaps, which Taiwan’s migrant workers were falling into. The worst offense was the legislature’s rescinding of jurisdiction over distant water fisheries several years ago, where the most egregious abuses occur under Taipei’s blind eye.

Although the U.S. [report] has given Taiwan a tier 1 ranking […] it has also emphasized the human rights abuse in Taiwan’s distant water fisheries in every single year’s report. It shows that the problem has always been there, but the government only tries to cover it up instead of really dealing with it.

Other NGO representatives in the coalition have voiced their own thoughts on the matter.

“The Taiwan government must urgently ratify international conventions, including the Work in Fishing Convention, and robustly implement laws to address both human rights abuses and the related problem of illegal, unreported and unregulated fishing.” 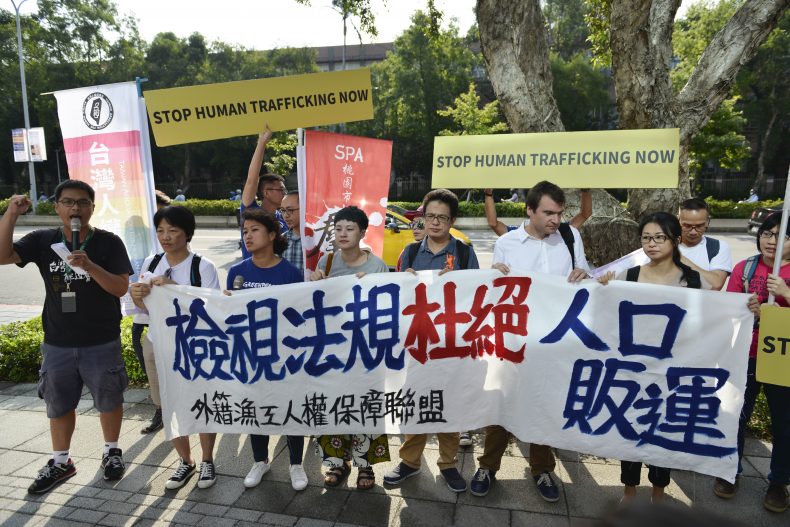 On July 17 a Taiwanese-flagged fishing vessel was detained in South Africa for violations of the International Labor Organization’s (ILO) Fishing Convention No. 188 (2007), which came into effect in 2017. South Africa is one of 10 countries to have ratified Convention No. 188, and includes provisions in its code for inspecting domestic and international vessels. Taiwan has not ratified the convention. Typically, despite its international exclusion, Taipei will ratify international agreements, particularly United Nations resolutions, in order to keep current with global standards and maintain its position in global trade.

According to an ILO report on the incident, the convention is aimed at providing workers aboard fishing vessels with adequate protections and safe work environments, including living, food, safety, and health accommodations. The convention also requires fishing operators to provide workers with an agreement establishing the limits of their work requirements in a comprehensible language, signed by the fishing operators or their representatives. The Taiwanese vessel in South Africa, upon inspection, had no manifest of its crew, and authorities only identified two such written agreements among the workers. Unsafe working conditions, including a lack of provisions and adequate quarters, were among other violations found.

Deputy Secretary General of Taiwan Association for Human Rights Shih Yi- Hsiang criticizes Taipei’s lack of action. “The government has been claiming that it has largely enhanced the protection for the migrant workers,” Shih said. “However, ironically, the first vessel detained for violating the Work in Fishing Convention since the end of 2017 after it came into force was a Taiwanese vessel.”

Credit where it’s due — the Fisheries Agency sent me a statement several weeks after my May report on the fishing industry in Taiwan. An Anti-Traffic in Persons Coordination Task Force (Anti-TIP Task Force) and Committee for the Promotion of Human Rights have been established under the Executive Yuan, the branch of government the Fisheries Agency falls under. In addition, a Working Group on the Rights and Benefits of Foreign Crew Members Employed Overseas has also been established. The statement indicates the working group and task forces meet regularly to address these problems. The Fisheries Agency also indicated the “Regulations on the Authorization and Management of Overseas Employment of Foreign Crew Members” provision of the Distant Waters Fisheries Act entered into effect as of January 20, 2017. The Fisheries Agency highlights it has made “substantial progress on safeguarding the rights and benefits for foreign crews on distant water fishing vessels.”

Hopefully these bodies will be given the agency to review conditions and enforce Taiwanese law in the distant water fisheries. Taiwan’s lack of real international power projection and enforcement makes this dubious; however it’s a welcome statement if it can be followed-up with significant action. Ratification of international conventions could help.

For its part, the Ministry of Interior has an enormous task to accomplish. It not only has to fight an uphill battle to gain an equal voice for Taiwan in more regional and international fora, which can help it find the footing it needs in order to address these problems, it must also negotiate the byzantine bureaucracy and enforcement inertia plaguing Taiwan. The IWSCHT workshop was hosted by an array of Taiwan’s domestic and  international oriented agencies, including the Ministry of Interior, the National Immigration Agency, the Mainland Affairs Council, the Tourism Bureau, the Ministry of Foreign Affairs, the Fisheries Agency, and the Ministry of Labor.

3 Vietnamese workers lost their lives in Taiwan’s third fatal factory fire in the past 14 months.

The Making of a Maritime South Asia?

Conceptions of the region have long focused on the primacy of the land. But, increasingly, South Asian states are turning toward the sea.

While serving as prime minister, Scott Morrison also secretly appointed himself to five ministerial roles – without telling even the existing ministers.