“Stick your neck out. What’s the worst that can happen? You’ll get a NO. No is simply a Next Opportunity.”

— Zelma Lazarus, founder and CEO of the Impact India Foundation

It was 1990. A young woman at the peak of her career was accompanying a team of doctors working for the Impact India Foundation’s “Cure on Wheels” project to the picturesque Himalayas. Her medical van passed by children trapped in the throes of disease, barely able to hang onto their lives in the grimy streets. The heart-wrenching scene stirred her to action and she began racking her brain for a way out of this misery. As she sat, buried in her own thoughts, she heard the faraway whistle of a train. It was like music to her ears. Before she knew it, a revolutionary idea was beginning to take root in her mind.

Within days she found herself facing resistance from the personal assistant to Indian Railway Minister George Fernandes who, after much hesitation, led her to a room adjacent to the office of the minister. Tired because of a night-long journey, she decided to allow her mind and body a few moments of rest. But she had already caught the minister’s eye and was quickly summoned. Before she could step inside, he opened the door and hurriedly asked her what she wanted, as he was due to leave for his next meeting very soon. The woman stood her ground and looked him in the eye.

“I want a train,” she declared.

The Beginning of a Prolific Journey

Zelma Lazarus did not get her train the day she asked for it. However, she did receive an invitation from the Indian Railway Ministry to travel back to Delhi the morning after her return to Mumbai. The minister, who was waiting for her in his car on her arrival at the capital city, informed her that her vision had most certainly impressed him.

“He said they were giving me two old coaches. And that was the start of the Lifeline Express,” she recounts fondly.

Lazarus is the chief executive officer of the Impact India Foundation (IIF), a nonprofit entity that emerged from the United Nations General Assembly Resolution to battle disability worldwide with a focus on both prevention and cure. IIF was the first of 14 organizations that together form the International Federation of Impact Organizations, launched by the government of India in 1983.

Lazarus, along with her hard-working staff members, toiled day and night to raise funds for refurbishing the dilapidated coaches. The idea of a “hospital train” that would dole out free healthcare services to the rural poor greatly appealed to large corporations. Their factories were located in some of the remotest areas of the country and being in the local populace’s good graces was always an advantage. Soon, funds began to pour in, owing to the Impact India Foundation’s brilliant public relation strategies and undying persuasion.

The wooden railway coaches underwent a radical transformation at the Integrated Coach Factory located in Perambur, Tamil Nadu. The IIF team equipped the train with state-of-the-art medical paraphernalia and facilities.

Doctors around the country were inspired by the charitable aspect of the program and jumped at the opportunity to attend to the rural poor free of charge. IIF also accepted, with open arms, medical interns and residents to work under the supervision of practicing surgeons.

“There was talk of a mandate that made it compulsory for young doctors to practice for a minimum of two to three years in rural areas before working in city hospitals,” Neelam Kshirsagar, head of fundraising and partnerships at the NGO, says. “There was pressure on the doctors to extend medical services in the severely neglected rural regions.”

On July 16, 1991 the hospital train undertook its maiden journey to Khalari village in the state of Bihar.

Sending a fully equipped train with seven coaches to a village in rural India is, of course, not easy. The arduous process begins with feasibility studies conducted by IIF to gauge the need for the train in a certain area. Checking the availability of a railway track siding to park the train and incurring the support of the local district administration is important as the train remains stationed at the chosen spot for anywhere between 15 and 30 days. Once provisions have been made for post-operative care and doctors are sworn in to perform surgeries on the train, the Lifeline Express chugs off to its destination.

The range of medical services provided by the LLE includes corrective eye, ear, and dental interventions, cleft lip and orthopaedic surgeries and epilepsy treatment. In December 2016, with the inauguration of two new coaches donated by the Indian Railways, oral, breast and cervical cancer treatment was added to this list. 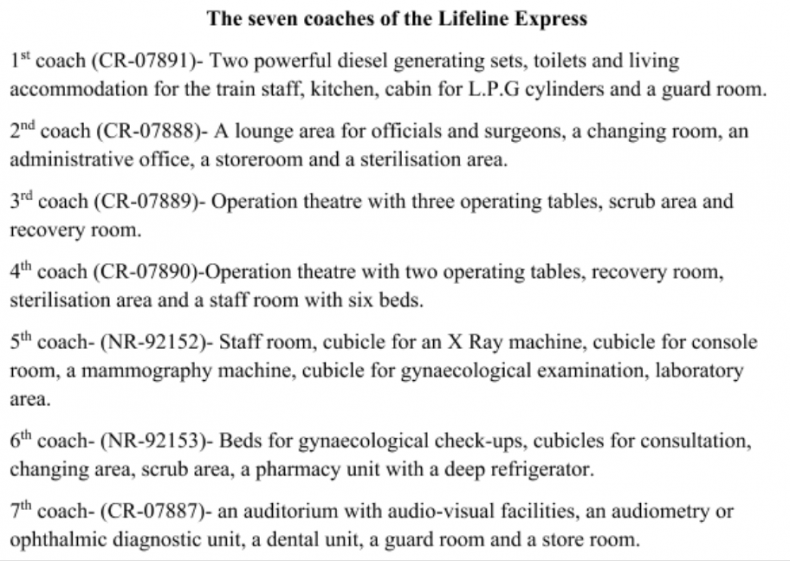 On February 8, 2018, Lazarus was honored with the ICICI Advantage Woman Award for the Lifeline Express.

The world’s first hospital train has achieved groundbreaking results in disability reduction in rural India. It has completed a grand total of 197 projects and impacted over a million people.

One of these is Vanitha Satish Suryawanshi, a young mother from Latur district in Maharashtra who was suffering from cataracts but unable to get an operation due to the long waiting list of patients at the local district hospital. Like all other patients, she first underwent a screening at the Lifeline Express OPD, cleared the eligibility criteria for the surgery, and was successfully operated on by Dr. Dharmendra Singh. The train restored her eyesight as well as her confidence.

Another beneficiary is Ayan Rajpat, who was born with bilateral club feet. Despite several attempts, the doctors at the government hospital in Ratlam, Madhya Pradesh were unable to relieve him of his discomfort and his parents could not afford to pay for advanced surgery. At the tender age of 15 months, he underwent a successful operation on the train and his parents could not be more thankful to the LLE for gifting their first child the ability to walk.

The Lifeline Express is currently stationed at Purnea district in Bihar. According to Anil Prem Sagar Darse, the deputy director of the LLE program, Purnea was chosen as the location of the train’s 198th project as it was one of the 115 “aspirational districts” in the country as classified by this year’s NITI Aayog report. The Aspirational Districts Program is geared toward achieving a rapid and positive transformation of backward districts in India.

“When we conducted a medical camp near Purnea, we saw the kind of food that is consumed by the people in that area,” adds Darse. “That made us realize Purnea was somewhere we absolutely had to go.”

There will be ear surgeries on the train till December 4, followed by cleft lip and orthopedic surgeries. 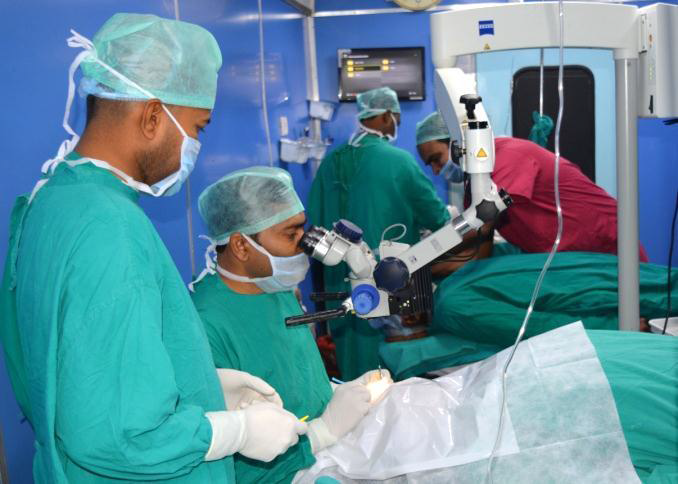 A surgery being conducted inside the train. Photo provided by the Impact India Foundation,

The Journey That Lies Ahead

Such has been the extent of the LLE’s impact that the government of India is ready to offer one more hospital train to the NGO in order to expand the reach of the program.

“Our objective is to show the way so that others can follow,” answers Lazarus whenever asked about the future of the program.

Indeed, the world’s first hospital-on-rails has certainly been a monumental source of inspiration for other countries. There are now four LLE trains in China and two in South Africa. Bangladesh and Cambodia have mobile riverboat hospitals instead of trains.

“I am very happy when I see the kind of transformation that happens within one hour,” Darse says, while talking about the surgeries conducted on the train. “It is absolutely amazing.”

So, for now, a singular blue train painted with rainbows and flowers will continue to bring seva or selfless service to the doorstep of India’s rural poor. It will be a harbinger of hope and healing. Its whistle will pump strength into the hearts of the sick and the downtrodden.

Transforming minds, bodies and lives one stop at a time, the “miracle train” will speed away on its journey without an end.

Amruta Khandekar is pursuing a Master of Arts in Journalism from Symbiosis Institute of Media and Communication, Pune.

Disability in India Is Still All About the Able

Disability in India remains about the able-bodied. Why?

How, and Why, the BJP Sometimes Courts Muslim Voters

Despite its Hindutva ideology, in some states and some elections the BJP courts Muslim voters.

Could Semiconductors Tip the India-Taiwan Scale?

India is set to expand its economic ties with Taiwan significantly.