The Case Against Bohai

A number of articles since mid-2016 have suggested various new buildings and infrastructure constructed at BSHIC would become China’s new nuclear submarine production line. Huludao is home to BSHIC, China’s only shipyard that constructs nuclear submarines, and these new facilities were under BSHIC. Land reclamation at BSHIC has occurred since 2014, with a number of large foundations and buildings constructed (Figure 1), including a main assembly hall, a pressurized hull production shop, a painting shop, and a number of transport rails. Pictures within the newly constructed assembly halls also prompted some Chinese military enthusiasts to compare it with interiors of other nuclear production halls around the world. 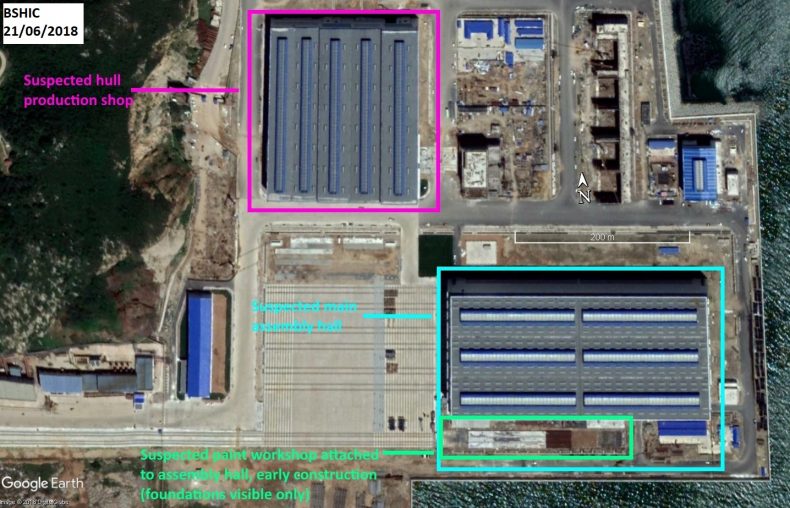 However, a very well written critique by Capt. Chris Carlson, USN (retired) suggested the new facilities are not intended for nuclear submarines. The thrust of Carlson’s argument revolves around two main points.

Second, Carlson argues that the foundations atop the reclaimed land are insufficient to support large and heavy loads like submarines. SSNs can displace up to 8,000 tons and SSBNs over 15,000 tons, surfaced. 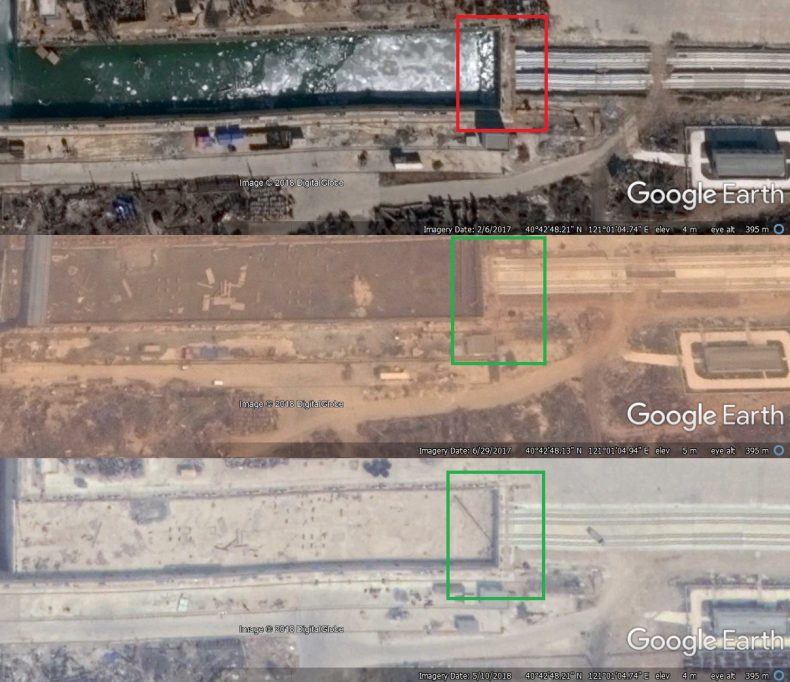 Figure 2 –the extension of the rail lines to the drydock

Carlson’s second argument is more difficult to evaluate. The accuracy of estimating the new facility’s load bearing capacity based on intermittent satellite imagery of the foundation’s construction is debatable at best. Not only is the imagery used for the estimates of less than optimal resolution, but months may pass between imagery updates on Google Earth, where substantial work may have occurred unobserved. For the purposes of this article, we will keep the plausibility of Carlson’s second argument in mind, but operate under the assumption that BHISC’s new facility could be for nuclear submarines.

Finally, the website East Pendulum has documented many reports and visits from staff associated with the Chinese nuclear submarine industry and the overall construction of BHISC’s new facility, further adding weight that it is intended for nuclear submarine production.

Assuming that the foundations of the new facility are sufficient for bearing nuclear submarines, the most immediate question of interest is what submarine types the new facility can construct and how many could be constructed at any single time?

To answer this question, it is most instructive to first look at the main assembly hall. At 288 meters long and 135 meters wide, the assembly hall is further divided into three rows, which will be referred to as “production ways” for this article. Each production way is 288 m long and about 45 m wide (Figure 3).

A 7.34 m gauge rail line would be sufficient to accommodate a cradle necessary to support a 10-12 m beam submarine consistent with many contemporary SSNs, such as the U.S. Virginia and Seawolf classes or the U.K. Astute class. Furthermore, one can also observe a 7.34 m gauge rail line leading out from the foundations of the future paint workshop toward the drydock, which makes sense as any complete SSN would be transferred to be painted before launch. Therefore, based on the 7.34 m gauge rail that leads out of the production ways as well as the paint workshop, it is possible to conclude that the new facility is very likely intended to produce SSNs with a beam of possibly 10-12 m. It is widely expected that the next generation Chinese SSN will be the 09V class.

Figure 4 – a 7.34 m gauge rail line leads into the future paint workshop, with two in each production way

However, the rail line leading from the paint workshop to the drydock is actually made up of two gauges. The first gauge is 7.34 m as previously indicated. However, a second rail line gauge is also present, at about 13.55 m wide (Figure 5). As previously mentioned, each production way features four “rail tracks” that make up two 7.34 m gauge rail lines; however, the central two “rail tracks” of each production way actually make up a 13.55 m gauge rail line as well, as confirmed on Google Earth’s measurement tool (figure 5). 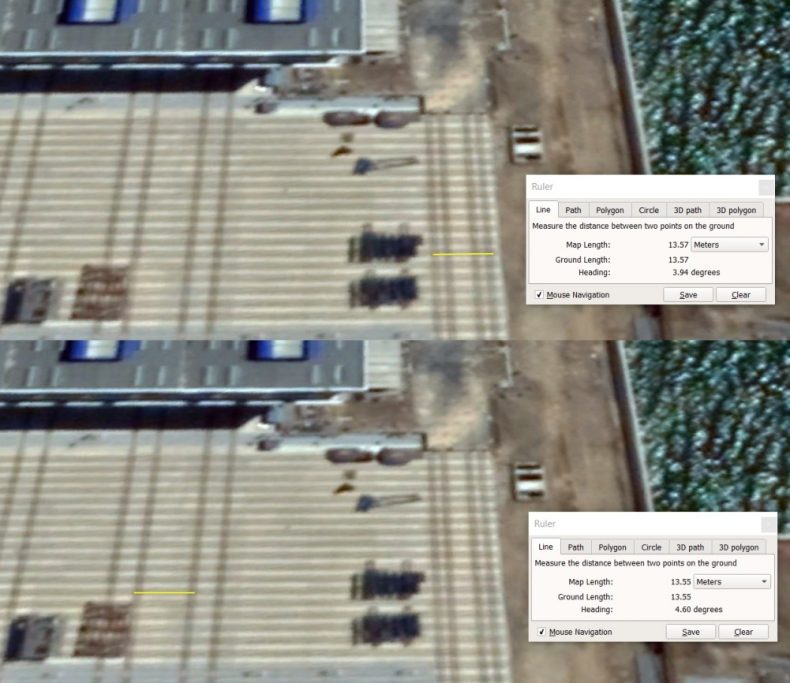 Figure 5 – a 13.55 m gauge rail line also leads into the future paint workshop, with one in each production way

A 13.55 m gauge rail line is more than sufficient to accommodate cradles necessary for modern SSBNs such as the U.S. Ohio class or Russian Borei class, which have beams of 13 m and 13.5 m respectively. The next generation Chinese SSBN is thought to be designated the 09VI class, and may accommodate the new JL-3 SLBM. A 13.55 m gauge rail line may be capable of supporting even wider cradles for larger nuclear submarines in future, perhaps upwards of 18 m in beam; however this could merely be a case of future proofing the facility’s rail gauges as well.

Therefore, each of the three production ways can adopt two different configurations (Figure 6): 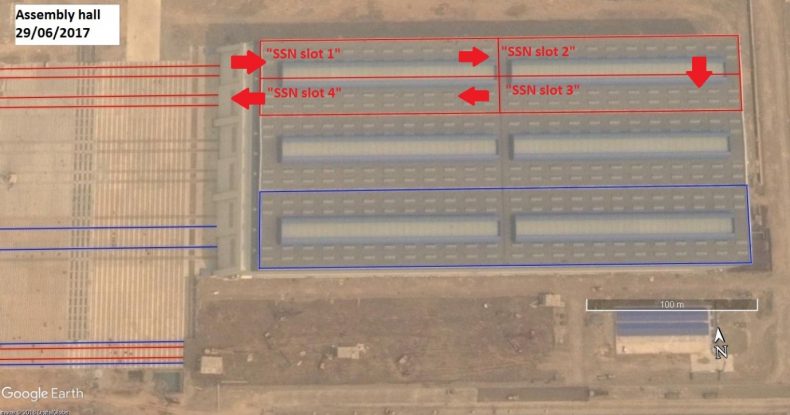 Estimating the number of theoretical SSNs or SSBNs that could be assembled in the overall assembly hall will require some basic arithmetic.

For the SSN configuration, it is also possible to see and deduce that each 7.34 m gauge rail line is placed slightly medial to their half of each 45 m wide production way. This provides a 22.5 m width for each 7.34 m rail line with about 9 m of clearance laterally from each wall or separator, and 9 m of clearance medially from the adjacent submarine. Nine meters of clearance for a rail line supporting a 10-12 m beam SSN should be sufficient for each production way to work on two SSNs alongside each other.

However, each production way is 288 m long, and most contemporary SSNs measure less than half that length. For example, the Virginia class is 115 m long and the Astute class is even shorter at 97 m. Therefore, it is unlikely the full 288 m of each 7.34 m rail line would be used for assembling a single SSN. In fact, assuming that 09V has a similar length to the Virginia class (which itself is among the longest contemporary SSNs in service), it would be possible for each 7.34 m rail line in a production way to accommodate two SSNs in tandem with room to spare for clearance.

The situation is a little less dramatic for the SSBN configuration. Each production way only has the single 13.55 m gauge rail line; therefore it prohibits two SSBNs to be constructed alongside each other. Furthermore, SSBNs tend to be longer than SSNs, with contemporary SSBNs measuring between 150-170 m in length. Assuming the 09VI class is of similar length, each 288 m long production way will only be able to accommodate a single finished SSBN (Figure 6)

In theory it’s possible for a production way to work on “one and a half” SSBNs at once, where modules for new SSBNs can be moved into the production way behind a SSBN that has already completed assembly; however that would require entrance doors on the east side of the overall assembly hall. Such doors have yet to be observed. Therefore, at this point it is estimated that each production way can only work on a single SSBN sized submarine, with the overall assembly hall capable of working on three SSBNs at once.

If the new BSHIC facility is intended for nuclear submarine production, the assembly hall allows us to estimate the potential production rate in future. Going by past practice, it is likely that the assembly hall will simultaneously construct a combination of SSNs and SSBNs. For example, one production way may be allocated to work on four SSNs at once, while the two remaining production ways work on each assembling one SSBN. Such an arrangement, once mature and properly organized with efficient pre-assembly module fabrication, may enable two SSNs and one SSBN to be launched every year.

Observers may wonder whether the Chinese navy would require sustaining such a fast rate of nuclear submarine production considering the anemic production pattern of the last generation of 09III and 09IV submarines. However, a decade ago similar thoughts could have existed for Chinese destroyer production – yet in 2018 alone, six new destroyers were launched (three Type 055s and three Type 052Ds).

Other commentators may express skepticism regarding the competitiveness of future mass produced nuclear submarines, as the 09III and 09IV classes are widely considered to be noticeably inferior to SSN and SSBN designs in other leading navies. However it is worth recalling the 09III and 09IV classes were designed and built in the 1990s by Chinese shipbuilding industry and technology of the time. The upcoming 09V and 09VI classes will likely be built using mid to late 2010s technology.

The Chinese Navy’s Destroyer Fleet Will Double by 2025. Then What?

China is about to finish the current phase of destroyer construction. What comes next?

What Will the Chinese Navy’s Next Frigate Look Like?

The U.S. Navy has chosen its next frigate; what will China’s look like?

What we know about the 075 Landing Helicopter Dock and other expected additions to the PLAN amphibious assault fleet.

What is the future trajectory of the Chinese People's Liberation Army Navy carrier program?