New Year celebrations in East Asia vary by country. While Japan follows the January 1 date of the Western Gregorian calendar, China celebrates the Chinese New Year between late January and February based on the lunar calendar. This year, the Chinese New Year will fall on February 6. South Korea, however, combines the best of both worlds with two separate yet similar New Year celebrations.

For Koreans, New Year’s Day, commonly known as Seollal, occurs at two times during the year. One occurs on the first day of the year on the lunar calendar, and the other on January 1 on the Gregorian calendar. The lunar Korean New Year is a three-day holiday to return home and visit extended family, along with performing ceremonies to honor your ancestors. Based on the lunar calendar, the lunar Seollal is usually celebrated on the same day as the Chinese New Year.

While the Chinese New Year has remained a steadfast tradition in China, the lunar holiday has been inconsistently celebrated on the Korean Peninsula. In North Korea, the lunar New Year was abolished in 1953 following the Korean War and was not revived until 1967. It was designated as a three-day holiday in 2003. Similarly, South Korea abandoned the lunar New Year after the Korean War as it impacted taxation and was seen as a direct result of Chinese influence. Despite the lack of official recognition, many families continued to celebrate Seollal and perform related rituals based on the first day of the lunar calendar. In 1985, the Korean government acknowledged these celebrations with a public holiday, “Folklore Day.” Four years later, the government replaced Folklore Day with the reinstatement of the lunar New Year’s Day, officially naming it a three-day public holiday.

The Western calendar Seollal was commonly called Yaang-rek-soul following its introduction during the Japanese occupation in the 20th century. Following the declaration of the three-day holiday, January 1 on the Gregorian calendar became a more casual holiday spent with immediate family. Similar to Christmas cards in the United States, families will send New Year’s greeting cards (Yeon-ha-jhang). January 1 also merits widespread celebration as it rings in everyone’s birthdays. No matter the date of one’s actual day of birth, all Koreans turn one year older on January 1. This comes from a combination of the importance of age and collectivity in Korean society, where age determines relational social hierarchy. Koreans also celebrate individual birthdays, so the New Year collective birthday has become more symbolic.

Many Korean families gather to celebrate both Seollals as family-focused holidays filled with food, gifts, and quality time with extended family. January 1 on both calendars is an especially auspicious day as it takes resolutions into immediate effect and represents the kind of year you wish to have. If you want to eat healthier in the new year, you eat as healthy as possible on January 1 (but allowing leniency for feasting). This can also include being on your best behavior, being respectful and kind, staying safe and avoiding recklessness, and even wearing new clothes. To demonstrate generosity, hosts will feed all guests the most common Seollal foods.

Food is one of the most important and symbolic traditions of Seollal. Korean rice cakes, or tteok, are generally thin, long rolls of glutinous rice that are chopped into smaller slices. Tteok is known for both its length and stickiness, respectively signifying longevity and the wish for good fortune, money, health, and happiness to “stick” to you in the new year. Tteok can eaten in a traditional soup, called tteokguk. 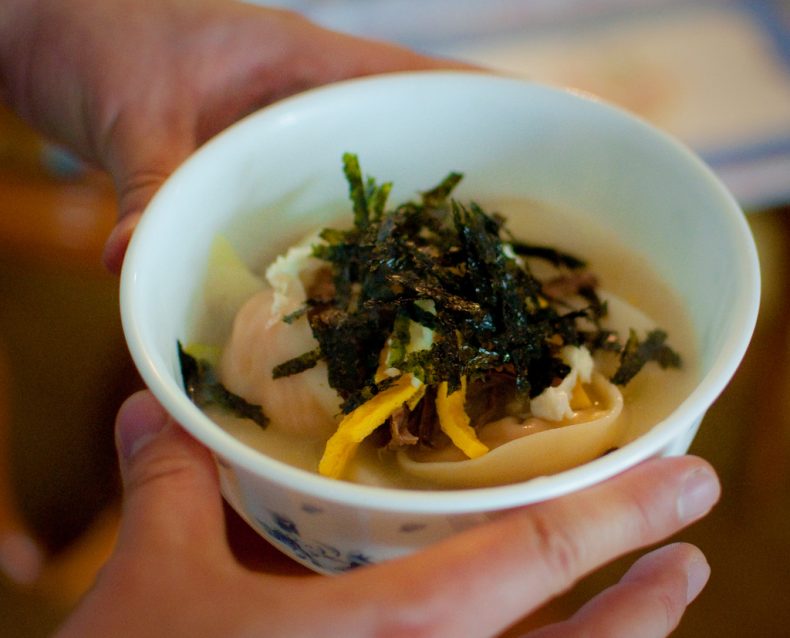 Korean tteok is not specific to Seollal, and it takes so many forms and types that there is a dedicated Tteok Museum in Seoul. Tteok is also eaten for good luck at other times throughout the year, including before the College Scholastic Ability Test (CSAT). The CSAT is known for determining which college a student will attend, and some students eat tteok the morning of the exam so the knowledge will “stick” to them.

Other classic Korean foods eaten on New Year’s Day include dumplings, or mandu. Making mandu is a multi-day family activity, involving preparing its ingredients and wrapping the dumplings. Mandu filling alone takes half a day to prepare, incorporating the common ingredients of ground meat (port or beef), tofu, cabbage, and garlic. Over time, families have added their own favorite vegetables such as mung bean sprouts, zucchini, Chinese chives, and scallions, to name a few. Although the time-intensive process of homemade mandu wrappings is now simplified into commercialized, premade wrappings available in Asian supermarkets, many still insist on making wrappings from scratch. This requires making the dough and waiting for it to soften before rolling it into a long tube, cutting it into pieces, and rolling it into small, thin circles. Family members, including children, will then sit together and place small helpings of filling into the center of the dough circles, using egg white to glue together the edges and wrap the dumpling. The dumplings are then steamed or boiled.

While food is always a staple at Korean holidays, Seollal has specialized rituals. One of the most important is Charye. Charye is performed at Seollal (and also at Chuseok in the autumn) and involves worshiping ancestors by preparing and presenting food at altars for their loved ones. Charye is performed first thing in the morning and is held at the eldest grown son’s home.

Sebae is another New Year-specific tradition among families, where children bow to all present elders, including parents, aunts and uncles, and grandparents. This ceremony is then repeated with other elders in the room, so a child with a large family may bow to each set of elders separately. Bowing is generational, and parents will bow to their own parents.

Sebae has an exact series of steps that change slightly depending on gender. First, an elder or couple will sit on the floor or a sofa. The child will approach the seated elder and then recite the same line: “saehae bok manee badesaeyo,” meaning “I wish you good fortune in the new year.” The bower will then clasp hands and bring them to the forehead. A male child will place his left hand on top of his right hand, and a female child will place her right hand on top of her left. Other variations include how a female comes to her knees and the degree to which she bows her head to the floor, both of which are adjusted to accommodate the wearing of the hanbok, a Korean traditional dress.

Completing Sebae in synchronized movements showcases the intentionality of the ritual and greater respect for the recipient. Once the child rises from the bow, the elder responds with an unscripted combination of well-wishes for the New Year, including health and happiness, successful endeavors, and, in most cases, to respect their elders. The elder will then present an envelope with cash inside. Unlike their Chinese counterparts, who give and receive red envelopes to represent good luck, Koreans typically give white envelopes. The amount of cash in a white envelope can fluctuate based on the child’s age and the elder’s relationship with the child. For example, the eldest child may receive more money than the youngest, and parents may gift a child more than the grandparents do. White envelopes do have an age limit; married couples must still perform Sebae, but they will no longer receive white envelopes.

While Seollal may have changed over the last century in terms of presence and practice, Koreans have successfully maintained these traditions between the two holidays. Whether celebrated over three days in the heart of Seoul with an extended family, or on the Western January 1 in the suburbs of the American Midwest with friends, Seollal is an easily shared extension of Korean culture and its most important aspects: food, custom, and family.

The national security advisors from the three countries met in Honolulu this week to discuss a coordinated response to the growing North Korean threat.

South Korea says it has agreed, in principle, with the U.S. on a draft end-of-war declaration, but North Korea has continued to refuse to participate.

Is South Korean Culture a Threat to North Korea?

The North Korean regime’s repression of South Korean culture reflects a logic that equates foreign culture with a threat to the regime’s stability.