While most developed democracies have exhibited increased tolerance toward same-sex relationships and the LGBT community more broadly, South Korea lags behind. The country does not criminalize homosexual activity, but lacks non-discrimination protection in the workplace, protection against hate crimes, and denies same-sex couples the right to marry or adopt. Legislative efforts for anti-discrimination laws have failed to pass multiple times since 2007, with greater success among 12 local governments despite conservative opposition.

What explains South Korean public opinion regarding the LGBT community?

Existing public opinion research tends to focus on a handful of factors, from support for same-sex marriage or other legal rights and protections to broader perception questions, such as whether homosexuality is acceptable. The World Values Survey (WVS) has even included a question regarding whether one would not want a homosexual as a neighbor. We expand upon an aspect tangentially addressed by the WVS: Does the proximity of a potential interaction with LGBT individuals influence perceptions? Peer-reviewed research conducted on nearby locales such as Hong Kong suggest that in many cases, proximity has a large impact on the respondent’s perception of homosexuality. More specifically, a closer relationship with the LGBT person in question (e.g. a family member rather than a coworker), makes the respondent less tolerant of their sexuality.

Many explanations for why proximity plays a role in tolerance are related to the Confucian influence on societies such as South Korea. The Confucian value of filial piety creates expectations that sons (and nowadays, daughters) will get married and continue the family line. However, because a gay son is unlikely to fulfill these expectations, family members may be especially opposed to a homosexual relative. Additionally, societies with Confucian influence often value group harmony over an individual’s freedom. In this cultural environment that prioritizes the collective good over the individual, one would expect social pressure against coming out since it would likely disrupt harmony.

To address whether proximity plays a role in the acceptance of homosexuality in South Korea, we surveyed 739 South Koreans this month via an experimental web survey conducted by Macromill Embrain, using quota sampling by region and gender. Respondents were randomly assigned one of three prompts regarding comfort levels with a homosexual person wherein each version altered the proximity to the respondent. Respondents were asked to evaluate the statement on a five-point scale from strongly disagree to strongly agree.

Version 1: I would feel comfortable working with a homosexual person

Version 2: I would feel comfortable making friends with a homosexual person

Version 3: I would feel comfortable with a family member that is a homosexual person

The table below presents the percentage of respondents that agreed or strongly agreed with each prompt. We also asked respondents if they knew of any Korean person who was LGBT. Only 10.15 percent stated that they did, while 74.15 percent said they did not and another 15.7 percent were unsure. Compared to Taiwan, where our recent survey found that 57 percent of people claimed to know a member of the Taiwanese LGBT community, this number is quite low and may be reflective of an environment less hospitable to coming out.

Overall and as expected, proximity appears to influence comfort levels, with roughly three times as many respondents comfortable with a homosexual as a coworker compared to a homosexual as a family member. Also as expected, comfort rates were highest among those that claimed to know a Korean LGBT person and lowest among those claiming to not know one. This finding matches the contact hypothesis, an important psychological theory stating that those in contact with a minority group will be more tolerant of that group. However, across all three groups, respondents were the least comfortable with homosexuals as family members. 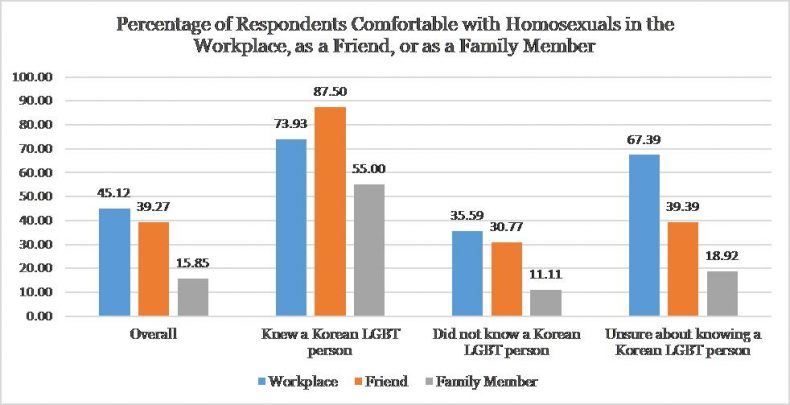 The next table split respondents by religion. Previous research has found that LGBT tolerance is higher among Catholics compared to Protestants, with limited survey research in South Korea finding that Protestants having lower support for LGBT issues compared to both Catholics and Buddhists. Buddhists in particular, with no clear religious stipulations against homosexuality, are often assumed to be more tolerant. However, in terms of comfort levels, we find similar rates across all three religions while the earlier pattern regarding proximity endures. Additional analysis finds that the proximity pattern endures after controlling for additional socioeconomic factors (e.g. age, gender, education, income). 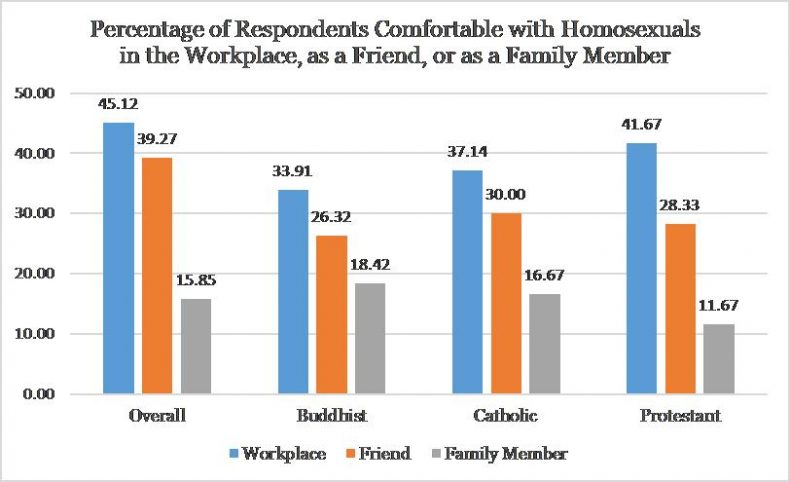 Considering that Taiwan and Japan also have Confucian-influenced societies, and that we see wide variation among perceptions of LGBT issues among East Asian democracies, there are clearly other factors affecting South Korean intolerance of homosexuality. Future research should expand upon such factors, which may include the institutional challenges facing LGBT organizations or the size and influence of Christian churches shaping the national discussion on LGBT rights and tolerance. It is promising that contact with those in the LGBT community leads to more acceptance of homosexuals, although our results show contact alone does not overcome proximity-based discomfort.

As the South Korean LGBT movement continues to gain visibility and more LGBT individuals feel comfortable coming out, acceptance of homosexuality should increase as well. Furthermore, it is useful to note that over time, perceptions of homosexuality will likely improve even if pro-LGBT groups see limited legal success. In fact, this trend can already be seen in World Values Survey data, which shows that in 2001, almost 53 percent of South Koreans believed that homosexuality was never justifiable, but by 2010 that number had dropped to 42 percent. While tolerance in South Korea lags behind their democratic neighbors — only 18 percent of Japanese in 2010 and 24 percent of Taiwanese in 2012 saw homosexuality as never justifiable, according to World Values Survey data — such trends suggest the strength of cultural influences discouraging acceptance may weaken over time.

Despite the negativity at this year’s event, organizers of the festival in Incheon are not deterred.

Christian groups are blocking LGBT organizers from receiving the necessary permits for a gay pride festival.

A COVID-19 cluster linked to nightclubs sparked a backlash against the LGBT community. Now some at-risk Koreans are reluctant to come forward for testing.