Elementary school pupil Saima was returning home from school when she passed by a suicide bomber and a truck packed with a gas canister in 2015. The explosion shattered her 8-year-old body. Saima’s family found her hands, but her legs were missing.

The center, located in a rented basement in Kabul, is the first repository for memories of those who fell victim to Afghanistan’s decades of war. It exhibits everyday belongings — from scarves to poems — that illustrate the lives lost to violence in the past 40 years of conflict in Afghanistan. The center houses the memories of a small portion of the victims, hardly 8,000.

Explanations on the wall claim that as many as 2 million Afghans were killed between 1978 and 2001; 90,000 more were killed and wounded since 2009. The center aims to avoid a “double catastrophe” — the first being the death of civilians in violent conflict and the second the “erasing” of those deaths from Afghanistan’s “collective memory.” 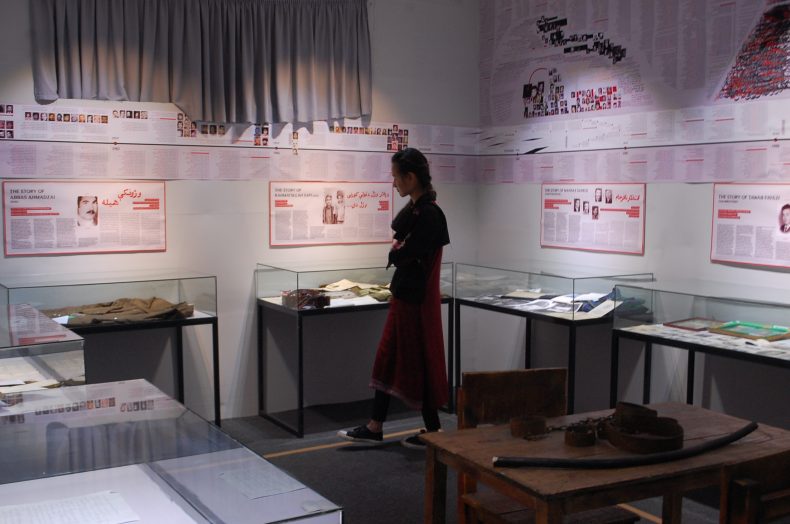 A girl visits the exhibition of memory boxes in Kabul. Image by Ezzatullah Mehrdad.

“We try to offer an alternative oral history,” says Hadi Marifat, director of the Afghanistan Center for Dialogue and Memory. “The common Afghan history is killing and destroying, and then there is a tale of the victims.”

In Afghanistan, warlords, commanders, and fighters are often lionized as martyrs on billboards and posters across the country. Dozens of streets are devoted to the warlords. Each year, several holidays are celebrated in honor of the fighters. But the country rarely pauses to remember the victims.

The fighting of warlords shattered countless Afghan families over the years and that history has been neglected. A written timeline snakes across the whitewashed walls of the center — chronic misery categorized into four decades of war, from the Soviet Invasion in 1979 to the civil wars following the invasion and the war against the Taliban since 2001.

Embedded in the timeline, names and photos of the lives lost to suicide bombings, airstrikes, mass killings, and unknown gunmen are exhibited to the visitors. Sorrowful music plays inside. Under harsh lights, memory boxes are displayed in which the prosaic belongings of the dead are collected. Each of the 35 memory boxes on display includes heartbreaking accounts by family members, a description of the death, and the grief and suffering of the family following.

“It moves us to review history,” said Ahmad Javid Tash, a visitor viewing the memory boxes. “To see how much we are responsible for the happening of the catastrophe by neglecting the victims.”

One of the memory boxes is an account from Mah Jan: “During the war, I have lost two sons, my husband, my brother-in-law, and a few cousins.” Her elder son, 19-year-old Abdul Rafi, was killed in 1997 in Logar Province. A year later, a rocket killed Abdul Wahid, her second son, 16, in Kabul. Her husband rushed to Ghazni to bring back the dead body of her brother two months later. The grief weighed too heavy on her husband, who first was paralyzed for six years and then died.

“When my Abdul Wahid was killed,” reads the narrative composed by Mah Jan, “people carried his dead body naked to home” because the family was too poor to afford to clothe her younger son.

Abbas Ahmadzai was 6 months old when his father, Zarkhan Ahmadzai, 33, and his uncle, Gulab Ahmadzai, 45, were arrested by the People’s Democratic Party of Afghanistan in 1979. Zarkhan, a nurse, and Gulab, a farmer, from Logar Province, disappeared. In 2013, their names appeared on a list of 5,000 victims executed back in 1979.

“I added a few of their belongings to the Memory Box,” Abbas Ahmadzai wrote in the narrative. “We never forget our loved ones that were killed in political rivalry atmosphere between groups and individuals.”

The countless victims of mass killings are represented on a muddy map of Afghanistan, dotted with tiny pins in a total of 19 confirmed mass graves. One tiny pin marks the spot where 25,000 were buried in one grave in Herat. Next to the map, a board exhibits newspapers headlines of civilian killings in the latest 18-year war.

“The victims’ wounds must be healed and we need to acknowledge their sufferings and pains,” says Marifat. “You cannot bring peace without healing the open wounds.”

The Memory Center opened to the public in February 2019, in the same month that the United States and the Taliban intensified talks to broker a peace deal. Zalmay Khalilzad, the U.S. special envoy on Afghan reconciliation, recently said in a local TV interview that a deal with the Taliban would not end the war, adding that a deal would unite the government and the Taliban fighters against the Islamic State. The war will drag on. 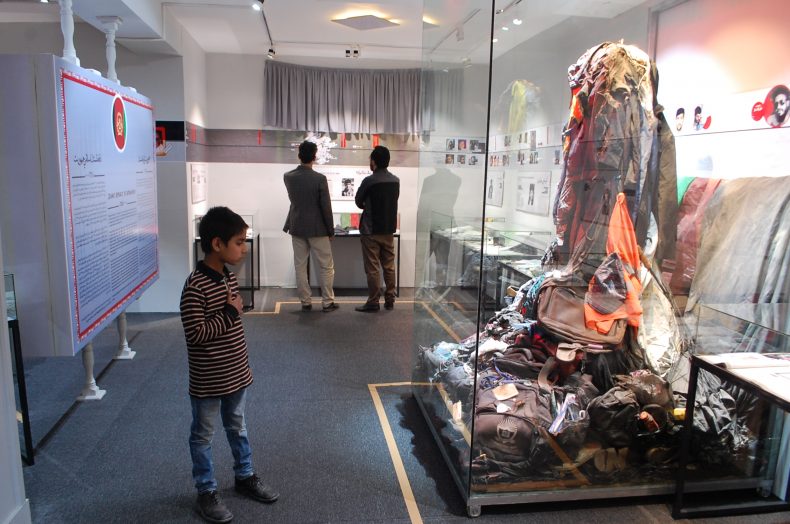 An Afghan boy stares at a tower built from unclaimed belongings collected from the sites of several suicide attacks on civilians. Image by Ezzatullah Mehrdad.

Next to the tower, a memory box featured the grief of Maryam Shafayee, who lost two sons, Hikmatullah, 28, and Asadullah, 15, to suicide bombings at a social justice rally in Kabul in 2016. Shafayee wrote that she had begged her sons not to attend the rally. She received back an unopened bag of fruits and the lifeless bodies of her sons.

When those who have lost loved ones “see their relatives’ photos and names,” says Marifat, “at least, they feel [they are] being respected.”

Ezzatullah Mehrdad is a freelance journalist based in Kabul, Afghanistan.

By Ellen Knickmeyer and Matthew Lee

Subsequent flights are due to bring more of the roughly 700 applicants who are farthest along in the process of getting visas.

US Withdrawal From Afghanistan: Another Long Goodbye?

It’s worth revisiting the Soviet Union’s withdrawal from Afghanistan, in light of the United States’ current withdrawal plan.

What’s Behind China’s Ban on NFTs?

Chinese authorities have made it clear that they do not welcome financial elements of the new economy, including NFTs.

Pyongyang may resort to a nuclear test when it fails to prevent the spread of the coronavirus nationwide.