The two democracies in Beijing’s shadow – Hong Kong and Taiwan — have a recent history of impacting the other’s civil society.

On June 9, hundreds of thousands of Hong Kong citizens filled the streets of the city’s business and administrative centers at Central and Admiralty to protest an extradition bill that would allow fugitives to be sent to governments that Hong Kong does not currently have an extradition treaty with — including China, Taiwan, and Macau. The bill and its main proponent, Hong Kong Chief Executive Carrie Lam, have created controversy in the territory as critics worry it may effectively end the city’s independent judiciary and criminal justice process, and hand too much control over criminal justice to Beijing. The protests against the bill drew an estimated 1.03 million people on Sunday evening, according to the bill’s opponents. If substantiated, this would be the city’s largest protest: more than 10 percent of its population turned out. Protesters gathered again on June 12, this time blocking major streets and calling for a general strike to prevent the bill’s looming passage.

Nearby, 23 million Taiwanese are watching, and either outcome of the protests — political capitulation or crackdown — will likely impact Taiwanese voters going into the 2020 presidential elections.

The bill has been followed in Taiwan for several months. Taipei has been seeking the extradition of a Hong Kong man who murdered his Taiwanese girlfriend but slipped off the island before authorities could catch him. Yet Taiwanese also understand such a bill would put dissidents and others who run afoul of Beijing — including many pro-independence Taiwanese — at greater risk of being extradited and criminally processed in China should they travel to Hong Kong. Due to questionable terminology in Hong Kong’s Basic Law, often referred to as its “mini constitution,” Beijing has asserted extradition is a matter of its sovereignty. Beijing also insists affairs in Taiwan are a matter of its sovereignty, making activities in Taiwan that draw Beijing’s ire a matter of China’s sovereignty.

Protests are nothing new to either Hong Kong or Taiwan, both of which held mass protests in 2014 against government policy that threatened the integrity of both democratic systems. For Taiwan it was the Sunflower Movement (which marked its five-year anniversary this spring), an occupation of the legislature and central Taipei in protest against former pro-China President Ma Ying-jeou’s attempts to force through his economic integration project. For Hong Kong, the Umbrella Movement that began in September 2014 was a sustained occupation of central Hong Kong, protesting a reform bill that would give Hong Kongers the right to directly elect their chief executive – but only by choosing among candidates effectively pre-screened by Beijing.

Both protests in 2014 captured the news in Taiwan: Taiwan could be the model for Hong Kong, while Hong Kong served as a warning against the “one country, two systems” model Beijing was attempting to entice Taiwan with. 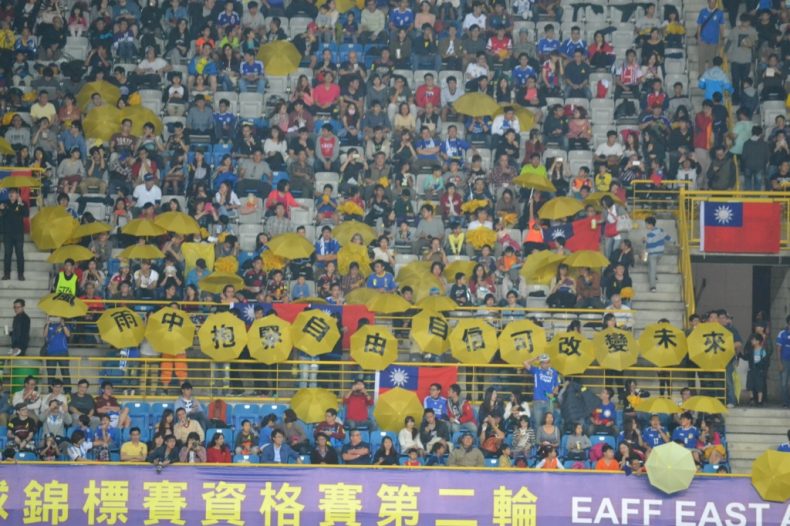 Kindred spirits and a show of solidarity: Taiwan’s flag hangs among dozens of yellow umbrellas during a football match against Hong Kong in Taipei in November 2014. The Taiwanese activists’ yellow umbrellas read roughly: “Among wind and rain hold tight to freedom, believe in change in the future.” Yellow umbrellas were the symbol of Hong Kong’s “Umbrella Movement,” which was in full swing in November 2014; Taipei’s Sunflower Movement had ended months earlier. Photo by James X. Morris.

It is still too early to see what sort of impact this latest protest in Hong Kong will have in either Hong Kong or Taiwan; however, Taiwanese netizens and seasoned Taiwan-watchers have been lighting up social media since Sunday, particularly with complaints that Taiwan’s widely panned news stations were ignoring the story. Two days into the protest, Taiwan’s media has begun following the developments more, though independent outlets and public-funded news are giving more coverage than the major for-profit stations.

Taiwan’s incumbent president, Tsai Ing-wen, of the pro-independence Democratic Progressive Party (DPP)  issued a statement about the protests on her Twitter account Sunday:

We stand with all freedom-loving people of #HongKong. In their faces, we see the longing for freedom, & are reminded that #Taiwan’s hard-earned democracy must be guarded & renewed by every generation. As long as I’m President, “one country, two systems” will never be an option.

Her potential opponent in the 2020 elections, Chinese Nationalist Party (KMT) primary candidate Han Kuo-yu, fumbled with his remarks, saying he did not know about the developing protests and calling them a “parade.” Han, the mayor of Taiwan’s largest southern city, Kaohsiung, made a controversial business trip to Hong Kong earlier this year, where he met with Beijing’s top representatives in the city.

Han’s main KMT primary opponent, Terry Gou, has criticized aspects of Han’s visit to Hong Kong. Gou has previously called “one country, two systems,” the current political model for keeping Hong Kong within the PRC fold – and for one day absorbing Taiwan as well, if Beijing has its way — a failure. Gou has also called on Beijing to ease its international pressure on Taiwan.

One informant who is a native of Hong Kong and who requested anonymity tells The Diplomat that the general mood in the city is one of unhappiness towards the local government, particularly the chief executive, who is widely perceived as not listening to the desires of the people. While Hong Kongers have handled much of China’s pressure on the city without complaint, they worry for their safety and ability to speak freely without crossing authorities in Beijing. They worry that granting China case-by-case extradition abilities will take away their judicial and criminal justice autonomy. Under the proposed law, Lam has stated human rights will be observed and each case will go through Hong Kong’s courts before an executive decision is made on whether or not extradition is necessary. However, in Hong Kong, many feel Lam has been attempting to cozy up to China at the city’s expense, which could compromise checks against extraditions or open up precedent for the erosion of judicial autonomy, much as the Taiwanese felt Ma had done for Taiwan’s economic autonomy in 2014.

Taiwanese pro-independence activists worry should the pro-China KMT retake the presidency in 2020, similar developments would occur again. Han has already spooked some with his trip earlier this year to Hong Kong and China. Terry Gou, the founder of Foxconn, also has strong ties to China.

For now, all eyes are on how Hong Kong deals with the protesters, who appear to be settling in for another occupation. It may be the bellwether for Taiwan’s political discourse in the coming months. The KMT retook much of the island’s local seats in a wave midterm election in 2018. Though there is no economic pact with the mainland to protest, the presence of KMT candidates who have such visible interests in China may be enough. The applicability of what is occurring in Hong Kong, and how it is dealt with, could trigger a backlash against pro-China candidates and reestablish full political control of the island to the pro-independence DPP in 2020.

Taiwan Politicians Continue to Align Themselves With Hong Kong Protestors

Protestors in Hong Kong demanding the withdrawal of a controversial extradition bill find a reliable ally in Taiwan.

How a Hong Konger’s death put Taiwan in a difficult spot amid the storm over Hong Kong’s extradition bill.

Hong Kong’s Protesters Live up to Their City’s Heritage

An intrepid new generation is following in the footsteps of previous Hong Kongers.

The larger divide between the central government and the semi-autonomous city remains.

What Did Japan’s Kishida Do at the UN General Assembly?

Japanese Prime Minister Kishida Fumio had a packed schedule on the sidelines on the U.N. General Assembly.

By Munir Ahmed and Muhammad Farooq

Under the September 14 agreement, the three parties will jointly fund a feasibility study of a proposed route through Kyrgyzstan necessary to bring the CKU Railway into being.

By Jim Gomez and Aaron Favila

The most powerful typhoon to hit the Philippines this year slammed ashore in Burdeos town in Quezon province before nightfall on Sunday.