In October 2001, U.S. B-52 aircraft flew over the capital of Islamic Emirate of Afghanistan, Kandahar, to drop bombs on headquarters of the Taliban movement. Senior officials of the Taliban, including Mullah Omar, the emir of the Islamic Emirate, fueled their trucks and left Kandahar behind.

The headquarters of the Taliban was turned into the U.S. Central Intelligence Agency (and later Afghanistan’s intelligence agency’s) base in Kandahar. The U.S-backed Afghan government housed female students of Kandahar University in the former compound of Mullah Omar.

The Taliban group waged insurgency for more than 17 years to return back to their capital. In late 2018, the group switched their focus to coming back through talks with the United State. For 16 days in March, U.S. envoy on Afghan reconciliation Zalmay Khalilzad and representative of the Taliban Sher Mohammad Abbas Stanikzai talked in Doha, Qatar, making progress on deal to end the insurgency. Stanikzai came to the negotiation table to open the way to his old office in Kandahar.

The Taliban claim they are no longer the same group that once ruled Kandahar, saying they no longer seeks to monopoly power in the country and that the group respects women rights according to Islamic Sharia law. But neither is Kandahar the same city that once served as the capital of the Taliban. Democracy thrives in the southern province; women work outside the home and girls attend schools and universities.

“The values Taliban stand for are different from the values that Kandahar stands for,” says Javid Faisal, an independent political activist who was born and raised in Kandahar. “If the Taliban come, they should adapt to an evolved Kandahar and Afghanistan.”

In the political sphere of the province, democracy thrives. In October 2018, Kandahar held parliamentary elections, where tribal and religious elders along with young and educated people vied to win a seat in Afghanistan’s parliament.

Kandahar, one of the earliest known human settlements in the world, has historically been a highly conservative province dominated by the Pashtuns, the largest ethnic group in the country. Pashtun social structure relies heavily on the importance of elders to make a decision regarding family, social, and political issues.

“The traditional structure has not changed,” says Faisal. But today, “the tribal elders are not the only decision-makers, but also women and educated people.”

Sitting in his office in Aino Mina, a luxury private town in Kandahar, Hekmatullah Sulhi, a civil society activist, proudly names freedom of expression and women’s rights as the achievement of efforts over the last two decades. “We also made sacrifices,” Sulhi adds, referring to a high number of civilian and military causalities. 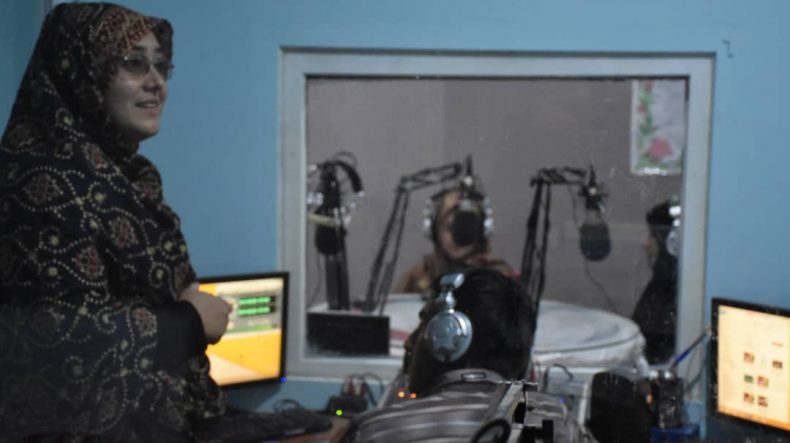 Maryam Durani, who runs Women’s Radio in Kandahar, in the studio of the mostly female-staffed radio station. Photo by Mohammad Imran.

It may be in the role of women where things have changed the most in Kandahar.

“We have female students in private and public universities and schools,” says Maryam Durani, who runs Women’s Radio, which broadcasts 15 hours in Kandahar. “Girls are learning to dream for their futures and to draw plans.”

In the city of Kandahar, women enjoy relative freedom of movement and work outside of the home. Durani claims that women make up 9 percent of employees of government and non-government institutions. Women shop without a male relative companion, though they typically wear a mostly blue burqa that covers their entire faces and bodies. The city set Wednesday for women to picnic in special places, including the city’s park.

“There is an educated women generation that nobody can shut them down,” says Durani, who also runs a library for women in Kandahar city. “They know their rights… Regardless of political situations, female movements continue working for women’s rights.”

Talk With Pakistan, Not the Taliban?

The 18-year-old insurgency and war has weighed heavy on both the U.S. and Afghan governments, leading Washington to start off peace talks in late 2018 without preconditions, sitting face-to-face with the Taliban. In the U.S.-Taliban talks, primarily the Afghan Taliban showed up. But for Kandahar, the other side of peace talks needs to involve more than just the Taliban.

“The Taliban is a terrorist organization that works for national interests of Pakistan, not Afghanistan,” says political activist Faisal. “Wives, mothers, and fathers of members of the Taliban are in Pakistan and the intelligence service of Pakistan control them.” It’s a common claim within Afghanistan, and especially in Kandahar.

Kandahar’s border police from time to time exchange fire with Pakistan’s army. The province has been at the frontline of opposing Pakistan, as it shares a border with the neighboring state. The powerful police chief of the province, Lt. Gen. Abdul Raziq Achakzai, was a hardline opponent of Pakistan. Raziq constantly accused Pakistan’s intelligence agency of arming and training the Taliban. In October 2018, he was assassinated by a Taliban fighter. The local government vowed to take revenge on Pakistan for the assassination.

Taliban are trained “in Pakistan’s soil,” says Faisal, before they enter Kandahar to “conduct operations.”

“The only way to end the war is by talking with Pakistan,” he adds.

“The [Afghan] government must work with regional countries [Pakistan] to reach a regional consensus over peace in the country,” says civil society activist Sulhi. 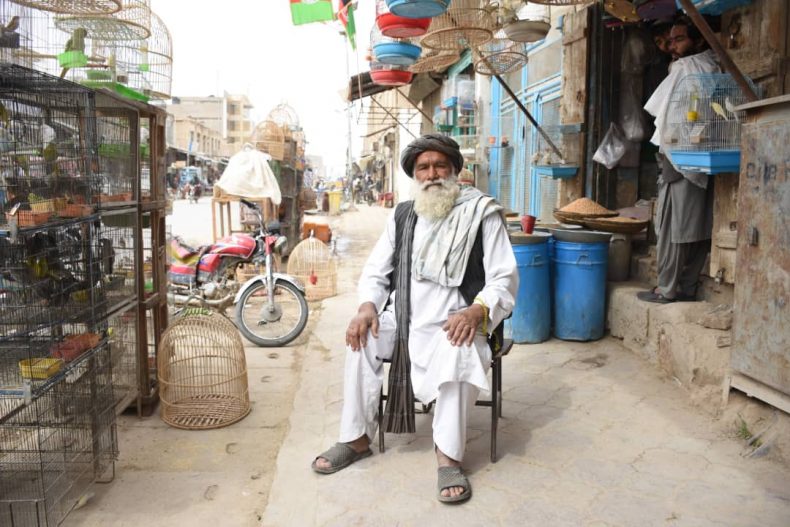 Abdul Majid, a 75-year old resident of Kandahar, poses for a photo in the center of Kandahar city. Photo by Mohammad Imran.

The luxurious city of Doha in Qatar was supposed to host U.S. representatives, Taliban representatives, and Afghan politicians Friday. The peace talks may pave the way for the Taliban coming back to play a political role in Afghanistan, and their former capital. But as of Thursday, the talks were abruptly postponed, reportedly over Taliban objections to the Afghan government’s list of attendees. It’s unclear, as of writing, when the talks will be rescheduled, or if they can still be salvaged in smaller form this week.

Abdul Majid, 75, has been living in Kandahar province for his entire life. He recalls that the Taliban emerged and took control of the province in 1994, asking his village to provide them with bread and yogurt. The sudden emergence of the Taliban was followed by an equally sudden collapse when the Taliban government was toppled in 2001. The Taliban and the United State along with the U.S.-backed Afghan government waged a war that cost the blood of many ordinary Afghans.

“I am really happy to see the peace talks,” says Abdul Majid. “They [the government] are my brother and he is [the Taliban] also my brother.”

Ezzatullah Mehrdad is a freelance journalist based in Kabul. His work has appeared in The Diplomat Magazine, South China Morning Post, Times of Israel, and many more.

Peace talks are predicated on the notion that the Taliban have fundamentally changed. They haven't.

Even as officials continue to talk peace, violence has surged in Afghanistan.

Can the Afghan State Survive the Peace Process?

Concerns are growing that Afghanistan's government will not survive an eventual U.S. withdrawal.