On July 23, Kim Jong Un, for the first time since his February 2018 military parade, showed the world a military system that is almost certainly designed to carry and deliver nuclear weapons. In an undated report, the Korean Central News Agency (KCNA) reported that Kim “inspected a newly built submarine.”

In doing so, Kim sent a sharp message both domestically and internationally. Within North Korea, the visit was a return to the spectacular days of 2017, when Kim oversaw the development of several new nuclear-capable systems — a reminder of his commitment to developing a strong national defense. Externally, the visit should serve as a reminder to the world that North Korea does not intend to undergo any form of nuclear disarmament. For the United States, Kim’s visit is an ominous warning of what may come should the Trump administration fail to take the North Korean leader’s April warning about the ongoing negotiations seriously. That month, Kim warned that North Korea would “wait for a bold decision from the U.S. with patience till the end of this year.” After that, we might see more of this submarine — or its intended payload.

The submarine itself appears to be what I reported on two years ago here at The Diplomat. Back then, the U.S. intelligence community had been tracking the development of a successor ballistic missile submarine (SSB) to North Korea’s lone Gorae-class SSB. This unseen vessel had been designated the Sinpo-C, for it was the third new type of large vessel to undergo construction at the Sinpo Shipyard. (Sinpo-B was the Gorae and Sinpo-A was a unique surface ship.) The U.S. intelligence estimate of the new vessel’s dimensions was that it would have a gross submerged tonnage in excess of 2,000 tons, with a beam measurement of 11 meters. The images released by North Korea suggest a considerably larger tonnage, with perhaps a similar beam measurement. The vessel’s external appearance, as seen in the three images released by KCNA, suggests it may be derived from Soviet-era Romeo-class/Type 033 submarines. (Joseph Dempsey of the London-based IISS has a helpful analysis on Twitter.) The KPN has possessed and operated Romeo-class submarines since the days of Kim Il Sung. 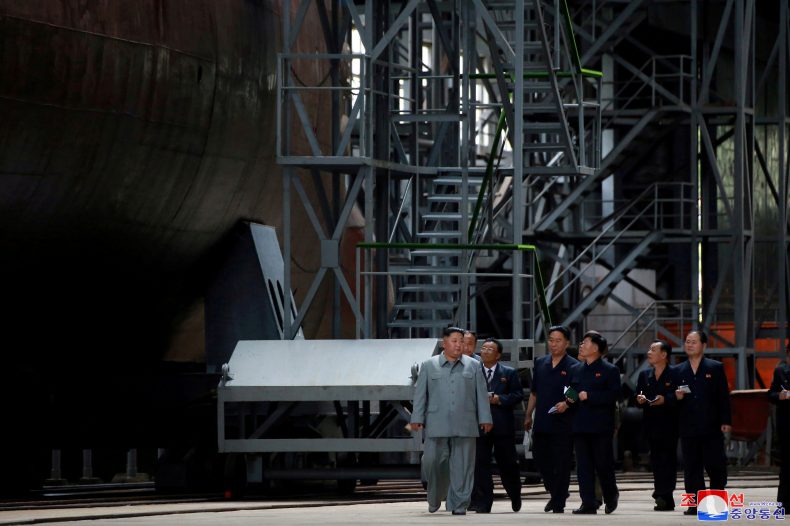 We know that the new submarine plays a role in North Korea’s nuclear strategy not from the images released, but from what KCNA chose to include in its release describing Kim’s inspection. Notably, the word “strategic” — often used as a shorthand for nuclear in North Korean releases — made multiple appearances. For the first time since 2017, KCNA employed the word “strategic” liberally in its description of the new submarine and its mission. Recall, for instance, the May 2019 tests of the new KN23 short-range ballistic missile. KCNA, in a bid to emphasize their non-nuclear nature, described those missiles as “tactical.”

By contrast, the July 23 release came close to emphasizing a direct role for the new submarine in ensuring a survivable second strike capability for Pyongyang. “Explaining the Party’s strategic plan for the use of submarine and underwater operation, he elaborated on the immediate duty and strategic tasks facing the field of national defense science and submarine industry to carry out the plan,” Kim was paraphrased as having said in the release. The shift to the explicit discussion of nuclear matters should not be overlooked. Additionally, the report mentioned that men including Jang Chang Ha, Hong Yong Chil, and Kim Jong Sik — all well-known figures associated with the country’s missile and nuclear development work — came along with Kim.

The precise payload intended for this new vessel remains unclear, but a strong contender is a successor submarine-launched ballistic missile to the Pukguksong-1, which made its debut in 2015 in the waters off Sinpo. Here it’s worth emphasizing that the submarine we’ve just seen is not yet ready for sea and it certainly isn’t ready to have its structural integrity put at risk with the tests of an unproven, new ballistic missile. If the testing of a new missile does occur, it will likely begin with testing off an underwater pontoon, starting with an undersea ejection test. Subsequently, North Korea would likely seek to carry out a short-range test and, finally, a full-range flight test before moving to testing off the new submarine itself.

There are good reasons to believe that a Pukguksong-3 SLBM has been developed in North Korea. In August 2017, as I wrote at the time, when Kim Jong Un visited the country’s Chemical Materials Institute, a display seen in the one of the rooms included a cutaway schematic of a missile labeled “Pukguksong-3.” The appearance of that display at the Institute suggested that the new SLBM might leverage improved airframe materials. This missile, however, has not been seen in public. In 2017, North Korea conducted multiple ejection tests of what was presumed to have been a new SLBM: that may have been the Pukguksong-3.

The images released by Pyongyang on July 23 are carefully framed to avoid revealing the precise payload capacity of the submarine. With the exception of one image, the submarine’s saddle section and presumed missile bays are not shown in any great detail. From the size of a Romeo-class submarine, it would be reasonable for North Korea to possibly accommodate three to four launch tubes for a Pukguksong-1-sized ballistic missile without major risks.

One of the most serious concerns that continues to vex me about North Korea’s determination to take its nuclear weapons to sea is with regard to command and control. Very little is still known about how North Korea operationalizes robust nuclear command and control for its land-based, road-mobile nuclear weapons. At sea, the issues that arise pose a great challenge for even mature nuclear states. For instance, Korean People’s Navy crews on board ballistic missile submarines may have to implement procedural — and only procedural — controls over the use of nuclear weapons during their deployments into the Sea of Japan.

In a crisis, they may have no guarantee of being able to communicate back with the North Korean leadership at shore. These concerns merit serious consideration as Kim’s nukes head to sea. North Korea may have started some preliminary work on constructing extremely/very low frequency shore-based transmitters. In 2017, U.S. intelligence agencies detected a “highly unusual and unprecedented” one-time, week long deployment by a KPN Romeo-class submarine. While the purpose of that deployment remains unknown, it may have been an attempt to study the effects of a sustained, week-long deployment off shore into the Sea of Japan. In particular, the KPN may have studied the communications difficulties that might arise with these kinds of operations.

While concerns about command and control at sea raise serious risks, they may also contribute to the augmentation of North Korea’s ability to deter the United States and its allies. If they might be concerned that an active anti-submarine warfare campaign against the KPN during a crisis or a conflict might trigger an early nuclear release by one — or eventually several — North Korean submarines, the incentives to tread carefully grow. What Kim must be careful about is the prospect of submarine-based nuclear weapons being used without proper authorization or accidental use. The KPN has a reputation for loyalty and the ballistic missile submarine force will likely involve further screening for loyalty and reliability, but there isn’t a foolproof way to eliminate the risk of accidental and unauthorized use while keeping a sea-based nuclear deterrent credible. What might augment deterrence in a crisis then poses serious concerns for Kim in peacetime. With little known about the procedural and other controls in place aboard North Korean nuclear submarines, much of this will remain ambiguous.

The broader observation from the July 23 display is the following: not only is North Korea not interested in giving up its nuclear weapons, under Kim Jong Un, it is pressing ahead with considerable strategic modernization and qualitative improvement. While analysts pored over the Gorae-class submarine for the last four years, that vessel was never going to be the basis for a reliable sea-based secure second strike capability. Its location in peacetime is well known and it would be a relatively simple target for U.S. and allied anti-submarine warfare capabilities. This new Romeo-class-derived submarine won’t be the quiet and stealthy basis of a 21st century undersea deterrent, but the experience gained over the course of building out this new vessel can be used to modify other Romeo-class vessels in the KPN’s inventory, leading to a modest, but important capability: enough to give U.S. and allied war planners a headache. Given North Korea’s poor land-based strategic depth and serious concerns about the survivability of its nuclear forces, the costs of a naval nuclear delivery program are outweighed by the benefits.

Something New, Something Old: North Korea's Next Missiles

The Pukkuksong-3 SLBM enters the scene and an old name, the Hwasong-13 ICBM, makes a return.

North Korea conducted its 15th missile test this year, believed to be a submarine-launched ballistic missile.

The Myth of Might Makes Right: Ukraine, Korea, and the Failure of Great Power Politics

The real lesson to draw from Ukraine’s security-for-denuclearization arrangement should be that multilateral agreements are not enough to guarantee follow-through.

The Afghan Taliban prefer to broker peace rather than crack the whip on the Tehreek-e-Taliban Pakistan.

Pakistan’s New Government Mends Ties With the US

Rapprochement could help ease Pakistan’s troubles with negotiating loans from the IMF.

For years, Japan and Thailand have enjoyed close relations in all areas bar one: defense. That is beginning to change.