LAHORE, PAKISTAN — Holding rose petals and garlands in their hands, men and children, all dressed in new clothes, walked nearly half a kilometer from their village to welcome their guest arriving from India.

Back at home, women are busy preparing traditional Punjabi cuisine and kids are being taught how to say “Sat Sri Akal” (a Sikh greeting) when they meet the visitor.

At last, Dhana Singh Dhillon arrives. He rushes toward Majeed Teja, hugs him, and tells rest of the crowd: “Oh Daroga Walyo! Aay [Majeed] mera peo aa, aay mera taya, aay mera khoon aa asal…” (Oh residents of Darogawala! He [Majeed] is my father, he is my grand uncle, he is my blood.)

Majeed, on the other hand, is all in tears.

Dhana Singh, the son of Majeed Teja’s childhood chum Sadhu Singh, started his journey from Bhaini Mehraj in Sangrur (a district of Indian Punjab, 200 kilometers east of Lahore) to Darogawala in Jhang (a district 200 km west of Lahore, Pakistani Punjab) to meet his father’s friend 72 years after the Indo-Pak partition.

Majeed’s clan lived in Badbar, some 3 km away from Bhaini, and enjoyed family relations with Sikhs of that area. Both villages were in the same state, Nabha, before 1947. During the partition, when Sikhs and Muslims from both sides of Punjab started killing each other, Majeed’s family took shelter under Sadhu’s father Bachitar Singh, then a Numberdar (sarpanch/villager elder) of Bhaini.

After few days, Majeed’s family was told that they could not live in Badbar; they had to move to a new country, Pakistan. But even as his family decided to depart from their ancestral village, Majeed did not have the courage to leave his pal Sadhu. He stayed.

“We were [absolutely] sure then that we will soon return to our village,” says Majeed.

It took the family’s elders five years to finally realize that Punjab was now irrevocably divided between Pakistan and India. Majeed’s uncle went back to Bhaini to bring him to their new home in Darogawala, Jhang (real name of the village in revenue records is Ram Krishan).

“I can never forget how my uncle was weeping when he saw their abandoned field and houses in Badbar,” Majeed recalls. “I also remember how my second father [Bachitar Singh] was crying like a kid when I left him.”

Bachitar died only a few years after the partition, but Sadhu still lives and has great knowledge about the Teja and Dhaliwal (sub castes of the Jat ethnic group) families settled in Badbar.

Now Sadhu has sent his son Dhana to Pakistan to bring Majeed back to India after 72 years. He fears he may not live longer and wishes to hug and talk to his childhood friend before dying – a feeling equally shared by Majeed. 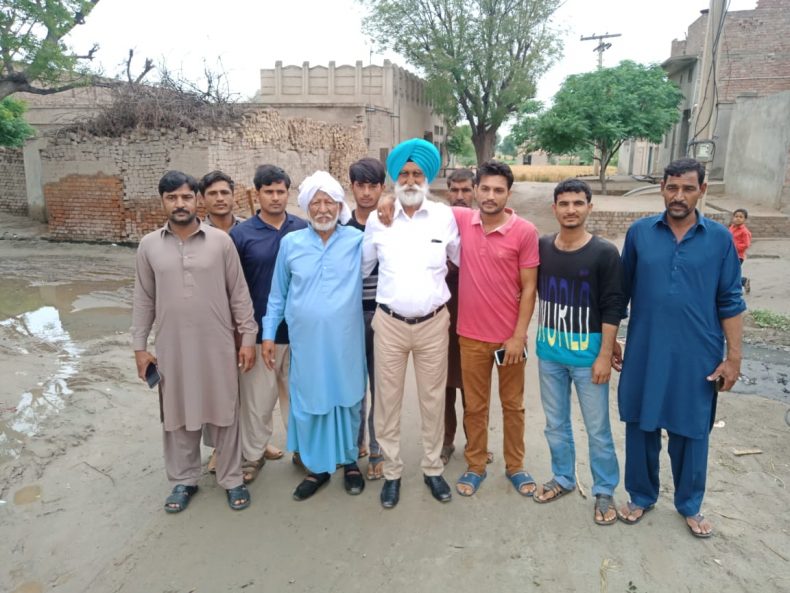 Singh with youths of Darogawala. Photo by Iftikhar Alam.

The Teja brothers, who settled in Darogawala after the partition, are the only survivors left to share the stories of migration with younger generations.

Majeed’s elder brother Siddique was an intelligent student at Badbar Primary School. He was in seventh grade at a high school of Longowal, a town near Badbar, when he had to leave his mates behind. He still remembers his teachers and friends calling him “Ram Pyari” with love.

The Tejas, along with other people of their clan, suffered the distress and witnessed the horrors of partition during their painful journey from Nabha to Lahore.

After spending months in different refugee camps, the entire clan decided to live in Jhang, referenced in the famous romance Heer Ranjha, as they used to listen to and sing the folk tale during their stay in Badbar.

Another reason for choosing Darogawala was that it had a striking resemblance to their native village.

After settling in their new home, Siddique and Majeed, along others now passed, would sit together and share memories of their previous homeland.

The jalibee, halwa, and shakarpara (all sweets) of Badbar, still haunt them. They would recollect their visits to other areas where their relatives were settled and remember animal trading with the Sikhs of Longowal and Kanjhla. Back then, they would play Kabbadi and wrestle with their Sikh friends and celebrate Lohri, Besakhi, and Eid together without any discrimination.

Like his brother, Siddique remembers how, even two decades after their migration, they believed that one day they would return to East Punjab. However, the 1965 war between Pakistan and India killed their hope forever.

All the other elders in Darogawala are dead, taking to their graves the memories of their ancestral village and the dream to visit their native land again. But thanks to social media, Siddique and Majeed are fortunate enough to meet someone from their ancestral village who could equally share the pains of partition and find solace in this rare reunion.

During his short stay at Darogawala, Dhana Singh tells the villagers how his forefathers have missed their Muslim “brothers and sisters” for decades. The Sikhs who migrated from Pandoki (a village at Lahore, Kasur Road and, according to some historians, the birthplace of great Sufi saint Baba Bulleh Shah) were allotted the lands and houses belonging to Tejas and Dhaliwals by the Indian government after the partition, according to Dhana Singh.

Parvez Jat, a young social media activist from Darogawala, is the man to be credited for the Dhana-Majeed reunion. Some four years ago, it was Parvez who started searching for people from Badbar on social media sites. His efforts finally bore fruit just a couple of months back when he showed Majeed and Siddique some videos of the village and fields they were forced to abandon in 1947.

“Parvez searched ‘Badbar’ of East Punjab on Facebook, YouTube, Google and other social networking sites, where he found a few old and young people of the area. And with their help, he made this magic happen in the lives of both of the old Tejas,” says Zahid Dhaliwal, another young man from Darogawala.

Majeed and Siddique cried like children while watching videos of the streets where they were born and grew up together before being separated from their home by the border, Dhaliwal adds.

Currently, there are hundreds of pages on Facebook and dozens of channels on YouTube where the stories of partition from both sides – Charda (East) and Lehnda (West) Punjab – are being shared with the third generation. 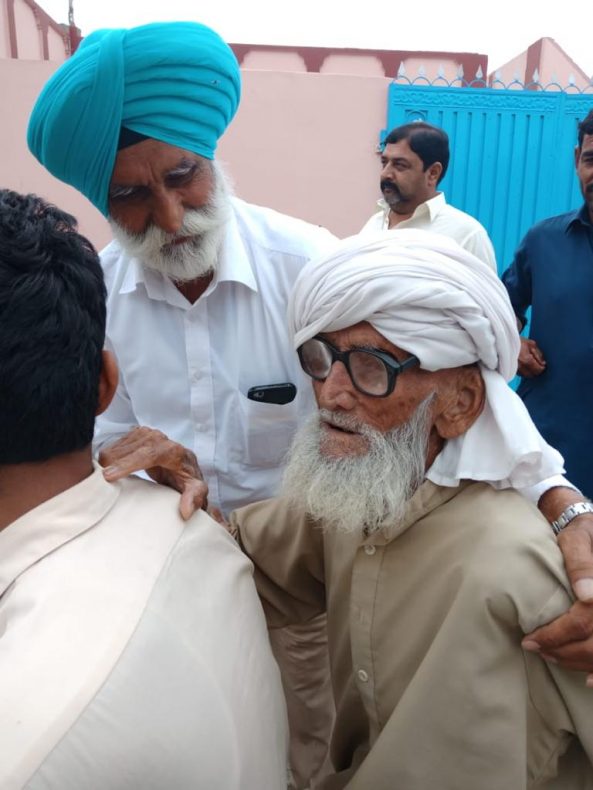 Singh with an elder of Darogawala. Photo by Iftikhar Alam.

This has come as a blessing for many elders like the Teja brothers, who could comfort their souls by asking their grandchildren to show them their birthplaces on smartphones and laptops.

Channels including Ik Pind Punjab Da, Punjabi Lehar, Desi Infotainer, Sanjha Punjab 1947, Indus Diaries, Sub Da Punjab, Ek C Punjab and many others are doing a fantastic job helping old friends see each other again – something the governments of both sides failed to do over the decades.

Now that Pakistan and India are engaged in negotiations on the Kartarpur Corridor, connecting the Sikh shrines of Dera Baba Nanak Sahib (located in Punjab, India) and Gurdwara Darbar Sahib Kartarpur (in Punjab, Pakistan), it is also hoped both countries would at least consider allowing visa free entry to those elders who migrated from one side of the border to another.

Even if they cannot return permanently to their native lands, hundreds of people like Dhana Singh and the Teja brothers, who lived through partition, are ready to play a part in promoting love and harmony between two nuclear-armed neighbors at a time of heightened escalation.

They still believe love will always win over hate.

Iftikhar Alam is a Lahore, Pakistan-based journalist. He writes on religion, politics, culture, agriculture and Indo-Pak Partition. Follow him on Twitter: @imiftikharalam

What Really Caused the Violence of Partition?

The country is being strangled by a chronic water shortage that stands to exacerbate tensions with its giant eastern neighbor.

Radical Barelvi groups are now resorting to violence to underline their sect – once famous for its pluralism – as the truest version of Islam.