The Mekong is reeling from the combined onslaught of climate change, sand-mining, and incessant damming of the river, which combined to help cause the worst drought recorded in over 100 years in July.

“This is the worst ecological disaster in history of the of Mekong region,” declared Thai natural resources expert Chainarong Setthachua.

The water level in the Tonle Sap, Cambodia’s great inland lake, the “beating heart of the Mekong,” was reduced to unprecedented shallow areas with one floating village almost completely dried up. Almost unbelievable for Tonle Sap locals was that this happened in not in the dry season, but two months into the rainy season.

Youk Sengleng an NGO fisheries expert stationed by the Tonle Sap, shared his observations: “Many fish died because of the shallow water, hot temperature, and toxic water resulting from lack of oxygen. Around 2.5 million people who depend on the lake’s once abundant fisheries have been directly affected. “

Taking too much water out of a river essentially sucks the life out of it. Pollutants become more concentrated and water flows dwindle, resulting in the build-up of sediments that clog up the river bed.

During a normal rainy season, the Tonle Sap expands its size to over 40 percent based on a 7-8 meter rise in water level in the Mekong after the heavy monsoon rains. This amazing “flood pulse” phenomenon, whereby the Mekong reverses the flow of the Tonle tributary back into the great lake, usually happens between the end of the August and mid-September.

A heavy cloud of uncertainty and anxiety hangs over the fate of the river now. It changes course every year, but seldom with such a diminished flood pulse. It is already too weak to support the level of fish breeding and food security that normally sustains 60 million people living in the Lower Mekong basin. Even if the river finally fulfills its heavenly mandate from the Gods of Angkor to change course, his year millions will still suffer from a scarcity of fish and a protein deficiency until fish stocks recover.

Ian Cowx, director of Hull University’s International Fisheries Institute (HIFI) in the U.K., explained that the biggest long-term obstacle to the recovery of fisheries would not come from climate change and this drought, but rather from the dams upstream.

According to HIFI research, “all fish species are adapted to periods of droughts and floods” and the climate factor does not cause a risk of species extinction. “The big issue here is whether other activities such as flow regulation and [the] barriers effect caused by hydropower, pollutants, and sediment extraction have degraded the habitat, and increased the risk of extinction,” according to Cowx. “Perhaps the biggest problem here is the reduction in flows caused by Chinese dams, the Lower Sesan 2 dam [on a Mekong tributary in Cambodia] and the loss of the Hou Sahong channel because of Don Sahong dam.”

In addition to these, the Xayaburi dam, the first dam to be launched and almost completed on the Lower Mekong, is another example of predicted long-term damage to the ecosystem, far greater than the problem of temporary water fluctuations.

The primary reason for the acutely low water level in the Mekong this July was the lack of rainfall, but operations at the Jinghong dam in China, and the almost completed massive Xayaburi dam in Laos, have also been blamed for exacerbating the water crisis. China decided to “turn off the Mekong tap” from the Jinghong on the grounds that they had to carry out “grid maintenance.”

At the same time critics have also pointed the finger at the Xayaburi dam for engaging in special tests that closed the floodgates. That further angered Thai farmers 220 km downstream in Chiang Rai province.

While the Thai dam construction company CK Karnchang denies any responsibility for aggravating the water crisis, Thai NGOs have petitioned Thailand’s Administrative Court, demanding that EGAT, the Thai Electricity Commission, delay purchases of electricity from Xayaburi dam, pending further investigation into its potential role in the unseasonal drought. This litigation could delay the scheduled October launch of the dam.

Everything is changing along the Mekong. Droughts are increasing; water resources are decreasing. The rich abundance of fisheries and biodiversity are threatened both from climate change and the unregulated damming of the river.

Chainarong, who teaches political ecology and natural resources management at Maha Sarakham University, asserted, “Today, we can see from the case of Chinese dams in upstream and Xayaburi dam in [Laos] that Mekong governments and their policies have unleashed an ecological disaster in the biggest river basin in the region.”

But in spite of various scientific warnings about the Mekong’s critical decline, policymakers and governments have not heeded civil society ‘s demands to impose greater environmental controls to safeguard a Mekong under siege.

An important wake-up call was delivered by the Mekong River Commission (MRC), which is composed of four member states: Laos, Cambodia, Thailand, and Vietnam. The MRC officially launched its Council Study report on hydropower impacts in 2018. Among many alarming conclusions, the report found that there would be a 35-40 percent reduction in fish biomass by 2020. Moreover, the report warned that hydropower development through 2040 will eliminate migratory fish in large parts of the Mekong. No Mekong migratory fish species will be able to survive in the reservoirs of dams planned by 2020 and 2040.

Given that the MRC fisheries department has reported the value of the Mekong fisheries — the largest freshwater fisheries in the world — at $11 billion in wild-capture fish (excluding fish farms) for the MRC countries alone, observers might reasonably expect deep concern about the dire prospect of fish extinction.

However, three of the four member states — Laos, Thailand, and Cambodia — surprisingly declined to endorse this landmark document based on five years of research, and have shown little desire to debate the report at all. Only Vietnam welcomed and endorsed the report. 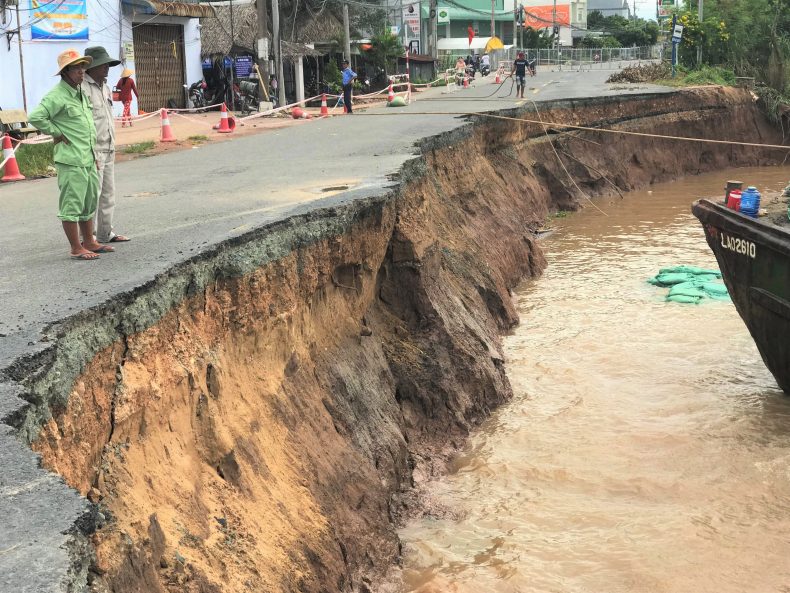 “The Mekong governments really need to wake up to the alarms of recent years, and start working together for the common good,” urges wetlands ecologist Dr. Nguyen Huu Thien, who has worked on several international reports on the Mekong as a consultant for WWF and ICEM.

In an interview with Thien in Can Tho, he mapped out his long-term concerns for his nation’s future: “The delta is sinking because most of the nutrient-rich sediment vital to replenishing the delta is trapped upstream by dams. This causes large-scale environmental degradation that is also linked to regional instability and tension. In the future the delta will no longer be able to sustain its 18 million population. They will have to flee as migrants and refugees. Hydropower in the Mekong region is sowing the seed for regional instability and it could become a regional security issue.”


New research published by the Stockholm Environment Institute in 2018 revealed that 96 percent of the nutrient-rich sediment of the Mekong will never reach the delta if all 11 dams mapped out for the Lower Mekong are built.

If upstream damming and environmental degradation results in Vietnam “losing” the delta, it would mean the loss of its major source of rice, fruit, and vegetables, which account for nearly 25 percent of GDP. Dr Thien wonders if, “in the long-term, without the delta, Vietnam can survive as a nation?”

When and if the damming could be stopped, the WWF’s water resources lead Marc Goichot explains there would be multiple benefits to the river: “Keeping the Lower Mekong free flowing would make some 28 million people in Cambodia and Vietnam more resilient to climate and water disasters while improving their food security.”

Hopes are rising that hydropower dams could soon be regarded as obsolete as renewable energy from solar and wind power is catching on in the region. Mekong energy analyst Brian Eyler a director at the U.S.-based Stimson Center believes that MRC states are starting to embrace renewable energy and will eventually shift away from hydropower. “Since the Xayaburi dam began construction in 2012 much has changed,” he said. “I am sure some officials in Thailand’s government regretfully see the Xayburi dam (bankrolled by Thailand) as an entirely unnecessary project.”

The original dream of the MRC’s 1995 Agreement was one river of international cooperation and the equitable sharing of water resources. But Dr. Thien Ding Tran, the director of Hanoi’s Institute of Economics, speaking at a Mekong Forum a few years ago, lamented that is not how it has worked out. “We can only save the Mekong by shedding the narrow ‘pond’ mentality of making profit from [each state’s sovereign segment of the river] in the name of development.”

Some cynical commentators may argue it is too late to turn things around and chart a new and more sustainable path for the Mekong. At a time when the health of the Mekong is endangered as never before, Thai academic Chainarong is convinced otherwise. “It is not too late to protect this river by stopping all dam projects in the pipeline, and developing a different Mekong policy based on compliance with the World Commission on Dams and the full participation of civil society and riverine communities.”

“All Mekong governments should collaborate to prevent the worst impacts of natural disasters, ecological damage and the plunder of natural resources with a different Mekong policy, balancing environmental protection with development,” Chainarong continued.

The Last Farewell to the Mighty Mekong

The shrinking Tonle Sap, the river's “beating heart,” is the latest wake-up call of the damage wrought by dams.