MUMBAI — “This is my legacy to the world,” says 52-year-old Prakash Bhoir, pointing at the 500-odd trees he’s planted outside his house; painted with black and white stick figures depicting humans and wildlife. Beyond this natural boundary, lies Mumbai’s Aarey forest, home to Prakash and his ancestors for generations, but now confronted with urban development plans envisioned for the financial capital of India. “Some don’t mind destroying the environment. But this jungle is all we have,” complains the Worli tribesman.

Known to be the aboriginal inhabitants of Mumbai’s state, Maharashtra, the Worli are one of the largest groups of adivasis (indigenous people) in India and their rudimentary art — basic geometric shapes and their animistic approach to “mother earth” — can be found in many government offices across the country’s western region. However, authorities are determined to put an end to the very same nature that imagery promotes.

On June 6, hours after celebrating the World’s Environment Day, the government of Maharashtra cleared 40 of the 1,280 hectares that make up Mumbai’s Aarey forest to build a zoo and a night safari. A few years ago, regional authorities took 30 hectares to build a multi-level parking unit for Mumbai’s new metro line against a pending petition to the Supreme Court challenging the construction.

Ever since the metro plan began, tribal families have been evicted due to an urban scheme that aims to displace over 1,500 adivasis scattered across Aarey; known as the green lung of Mumbai’s concrete jungle. Activists campaign against the project that threatens the megalopolis’ biodiversity, fearing it will eventually lead builders to encroach further north, into the protected Sanjay Gandhi National Park. 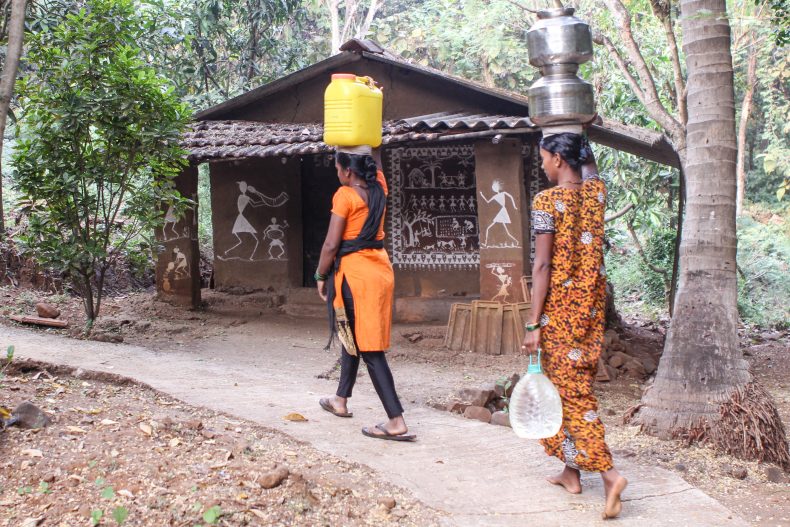 The Legal Battle to Save Mumbai’s Only Green Lung

As early as November 2014, morning walkers, cyclists and other Aarey’s visitors were shocked by the notices announcing the cut of about 2,300 trees to build a new metro-car depot inside the forest. “Citizens organized protests against the mass tree-felling. Later in February 2015, more than 1,200 people formed a human chain at the government offices in Marine Drive [Mumbai’s sea-side boulevard]. Save Aarey Movement was born,” recalls Amrita Bhattacharjee, of the network Aarey Conservation Group (ACG).

Following the demonstrations, the state government set up a six-member-committee to look into the matter. The only two independent scientists of the expert group — the remaining four were bureaucrats — put a dissenting note in the final report. They argued that Aarey is an ecologically sensitive zone, the floodplain of the Mithi river and that its use for construction purposes could lead to floods in nearby areas. Their plea was dismissed along with five alternative locations across the city for the metro-car depot.

Mumbai Metro Rail Corporation Ltd (MMRCL) insists Aarey is the “most suitable land due to its size, shape and location.” In their favor, officials add that the new line the depot would support will help carry around 1.7 million people daily and contribute to curb down the number of vehicles in India’s financial hub by 650,000; easing its infamous crawling traffic jams and lightening a local train system overburdened with some 7.5 million people a day.

However, environmentalists say they aren’t against the much-needed new metro, but that there are better sites for this particular project. “There are plenty of options and in all of them malls can be built on top of the metro-car-shed like other cities have done. Why do they disturb a forest?” asks Amrita. “Aarey was declared no-development zone in 1991. Today’s authorities new approach suggests there are real state interests involved.”

“This is a clear case of the government bulldozing green areas at the behest of developers. In fact, their report admits that they chose Aarey because there’s scope for profit,” claims 54-year-old Stalin Dayanand, director of environmental group Vanashakti. In 2015, the organization requested the National Green Tribunal to declare Aarey an eco-sensitive zone. Following three years of litigations and several violations of court orders against MMRCL illegal excavations in the area, the Tribunal decided in 2018 that the matter did not come under its jurisdiction and requested petitioners to approach the right authorities.

The area of contested claims, most of Aarey — a little land-appendix of Sanjay Gandhi National Park, spreading 109 sq km north — was given to the department of dairy development of Maharashtra in 1951. Known since at the “Aarey milk colony,” only a fraction of it was to be used for cattle, while the rest is densely forested and dotted with lakes and the Mithi river. Over time, slum dwellers have also settled along with an estimated 10,000 adivasis inhabiting 27 padas (tribal hamlets) across the forest; an area lying in a prime location inside a megacity where land is scarce and real estate prices are among the world’s most expensive. 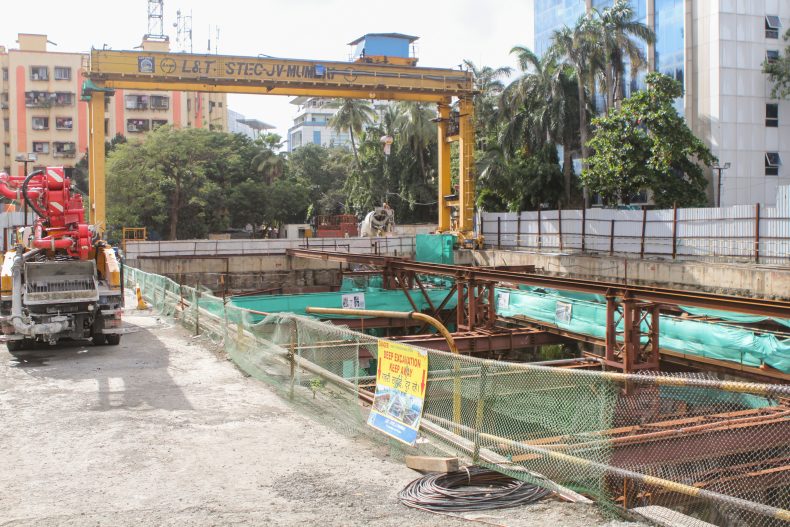 Since the authorities started the work for the new metro car-shed will inside 30 hectares of land in Aarey, local activists and environmentalists have taken their protests to the streets and the courts. Photo by Angel L Martínez Cantera.

What’s at Stake in Aarey?

“Our studies show growing concerns related to climate change due to uncontrolled urbanization and the shrinking of forest areas such as Aarey,” explains associate director of The Energy & Resources Institute (TERI) in Mumbai, Dr. Anjali Parasnis, who promotes sustainable development respecting areas that serve as water table, heat mitigation and pollution control for Mumbai — the world’s fourth most noxious megacity.

Although Aarey has an average of 570 trees per hectare — hence qualifying as a moderately dense woodland — and a biodiversity that hosts 80 types of butterflies, 77 bird species and a dozen different mammals including leopards, this rich patch of green land does not have the legal status of a forest.

“This is an insult to the intellect. It looks like a forest, smell like it, breathes like it, but it’s not declared so?” argues Dayanand, whose group has escalated the matter to the Supreme Court and claims that part of Aarey was given to the National Park in 1969, proving its real status had the Forest Department kept record of that sale: “In one way or another, authorities always twist the law as per their convenience.”

Facing legal deadlocks in all fronts, environmentalists turned to the indigenous people of Aarey as its only saviors. “If we can prove that adivasis always lived here, there are great chances that the judiciary declare it as a forest,” says Bhattacharjee referring to the Forest Rights Act (2006), which entitles aboriginal people to a host of amenities over the land where they reside and enforces their protection. But this law never benefited adivasis in Aarey; they have not only lacked basic facilities but some have also been forcefully evicted.

“I couldn’t prove that my ancestors lived in Aarey. And I didn’t have a choice because my wife was pregnant and they would have bulldozed my house anyway,” justifies 38-year-old Sanya Padavy, who accepted relocation into a multi-story building with seven other adivasi families in 2017. Following the Development Plan 2034, authorities have evicted tribal people as if they were slum dwellers, in violation of their rights.

So far, the zoo has affected five tribal hamlets and hundreds of adivasis from Aarey. The forest aborigines, however, fear other projects will follow the metro-car depot. “Trees are everything we have,” says Prakash Bhoir pointing north, to the Sanjay Gandhi National Park, a unique jungle within the boundaries of a megacity. “We will protect them [trees] like they protect us.” 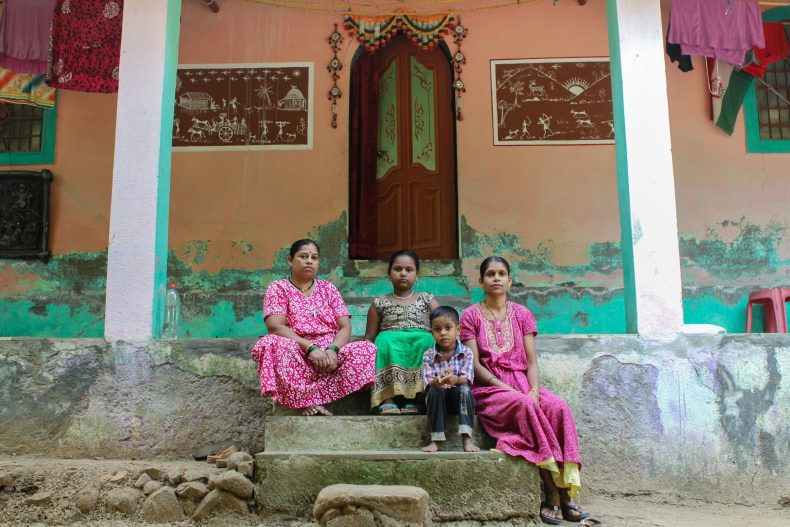 The urbanization of Aarey threatens the city’s water table that also serves to control the heat and pollution. This green patch of land inside Mumbai also hosts a rich biodiversity as well as tribal communities. Photo by Angel L Martínez Cantera.

Angel L. Martínez Cantera is a Spanish freelance photojournalist based in Asia since 2013. He has an MA in international politics from City University of London (UK) and specializes in human rights and development.

Mahul was supposed to be an escape from the slums. Then the sicknesses started.

Illegal mining, crop failure, and disease devastate the people who live in an important epicenter for stone quarrying in India.

Loktak Lake: The Human and Environmental Costs of Hydropower

A dam in Manipur showcases the long-term impact on both ecology and local communities.

By Ruwa Shah and Ahmer Khan