While its last nuclear test occurred in 2017, North Korea continues to test short-range ballistic missiles and rocket systems, with seven new tests since July. Meanwhile, in the aftermath of the Trump administration pulling out of the 2015 multilateral agreement to freeze Iran’s nuclear program, relations with Iran have soured further, with both sides shooting down drones this summer. This month Iranian officials activated advanced centrifuges that would accelerate uranium enrichment necessary for the development of a nuclear weapon, although Iranian officials insist that the program remains a civilian program and the U.S. intelligence community and the International Atomic Energy Agency (IAEA) have not suggested that the program has shifted to military use.

Both programs present challenges to U.S. interests and regional stability more broadly, even if one is an explicitly military program and the other to date has not been converted from a civilian to military program. Moreover, leaders in both Iran and North Korea likely see a nuclear program as the ultimate deterrence and an asset for regime survival, a lesson difficult to ignore in the aftermath of Muammar Gadaffi’s 2003 disarmament agreement and NATO’s 2011 military intervention that resulted in the end of his rule. Nor can the Trump administration use a one-size-fits-all approach to both problems.

However, to what extent does the American public view these two programs as threats? Furthermore, does the public view one of these with greater concern? Logically, the public should be more concerned about North Korea’s program, which has resulted in six nuclear tests and an estimated 30 nuclear warheads, although the regime appears to lack the delivery mechanisms to reach the continental United States. A cursory view shows that North Korean officials also speak of their nuclear program more often. Meanwhile, if Iran chose to convert their program to military use, the country could enrich enough uranium for a weapon in under 12 months if desired, with additional time likely necessary to convert the fuel to a weapon. Thus, at the present, North Korea’s weapons present a clearer threat than an Iranian program still in mid-development. While we should be hesitant in making assumptions about the public’s knowledge or interest in international affairs, we would expect a developed weapons program to elicit greater concern.

To assess public opinion on these nuclear programs, we conducted an experimental web survey via mTurk Amazon earlier this month, randomly assigning 1,059 American respondents to evaluate one of two statements about a nuclear weapons program.

Version 1: Iran’s nuclear weapons program is a critical threat to the vital interests of the United States.

Version 2: North Korea’s nuclear weapons program is a critical threat to the vital interests of the United States.

The figure below shows the percentage that agreed with the statement, further broken down by partisanship. 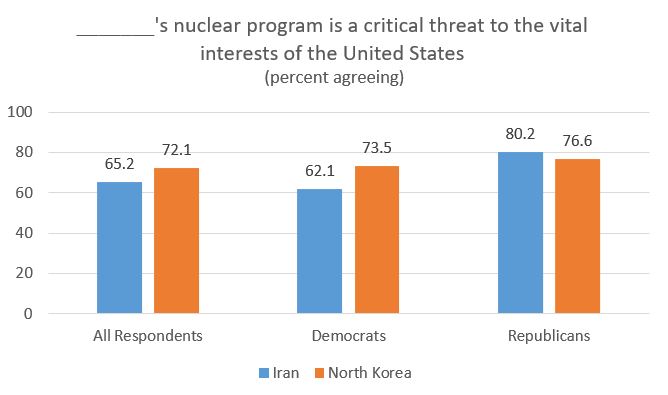 Overall, a majority of respondents viewed both programs as critical threats. However, respondents were 6.9 percent more likely to view North Korea as a threat. Meanwhile, a much clear deviation emerges when comparing those who identified as Democrat versus Republican. Republicans viewed both nuclear programs as critical threats compared to the views of Democrats and were 18.1 percent more likely to view Iran as a threat. Moreover, Democrats viewed North Korea as a greater threat by 11.4 percent, while Republicans viewed Iran as a greater threat by 3.1 percent. Our results are consistent with a 2015 survey that showed  that 74 percent of Republicans believed Iran’s nuclear program was a major threat to the United States.

What explains this partisan deviation is unclear. President Donald Trump has addressed both threats at various times, while arguably exacerbating the Iranian threat by pulling the United States out of a multilateral agreement that froze Iran’s program. In contrast, despite no commitment by North Korea to denuclearize, no additional nuclear tests followed the first Trump-Kim summit. North Korea, unlike Iran, seems more willing at least to discuss denuclearization again.

One possible explanation for this partisan deviation surrounds public support for Israel. According to the Pew Research Center, 79 percent of Republican voters support Israel over Palestine, compared with only 27 percent of Democratic voters. In addition, 52 percent of Republicans favor Israeli Prime Minister Benjamin Netanyahu, compared with only 18 percent of Democrats. Currently, Israel perceives Iran to be an existential threat to its existence. This is highlighted by Netanyahu, who in reference to the Iranian-backed Hezbollah, claimed  that “80 percent of Israel’s fundamental security concerns stem from Iran.” Thus, we can infer a strong connection between Republican views on the threat of Iran paired with their overwhelming support of Israel. In this case, Republican voters may interpret Iran’s nuclear program as a direct threat to Israeli security. Such was clearly demonstrated, in 2015, when Republican lawmakers invited Netanyahu to deliver a speech to Congress blasting the Iranian nuclear agreement formulated by the Obama administration as incapable of curbing Iran’s pursuit of developing nuclear weapons. One could attribute this case of partisan deviation to Republican respondents following the prevailing party view of Iran more broadly, paired with the geostrategic proximity of Iran to Israel.

Another source of this deviation may be rooted in anti-Islamic views held by some Republican voters. Although Islamophobia exists within both political parties, the relative importance of Islam and Muslim immigration was markedly higher among Republican voters during the 2016 election. According to researchers Sides, Tesler and Vavreck, Trump outperformed other GOP candidates among Republicans who held unfavorable views of Muslims prior to the election campaign. This research also indicated that Republican voters largely supported Trump’s plan to halt temporarily immigration from several Muslim-majority states, including Iran. As such, with Republicans voters harboring a larger share of anti-Muslim views, it is feasible that such bias would lead Republican voters to perceive Iran’s nuclear program to be more of an immediate threat than that of North Korea’s, despite North Korea already possessing functional nuclear weapons.

Parker Cohen is a recent graduate of Western Kentucky, who majored in Political Science and International Affairs.

Pyongyang may have just tried to publicly signal the U.S. its willingness to give diplomacy another try.

Is missile defense the way out for the United States?

What North Korea Means – and Doesn’t – for Nuclear Deterrence

Rather than underscoring the enduring logic of nuclear deterrence, the case of North Korea highlights its flimsiness.