Every year, Körber-Stiftung publishes the “Berlin Pulse,” a project that contrasts perspectives on German foreign policy by high-ranking international authors with current German public opinion based on representative surveys. This year’s edition contains a whole chapter on Germany’s role in the Asia-Pacific, with contributions from analysts around the globe. This interview with Thorsten Benner, Co-Founder and Director of the Global Public Policy Institute (GPPi) in Berlin and Torrey Taussig, Research Director for Transatlantic Relations 2021 at the Harvard Kennedy School, first appeared in 2019/20 edition of The Berlin Pulse.

Körber-Stiftung: Brussels and the U.S. share a number of grievances vis-à-vis China, but disagree on the means. How do both parties see each other’s role and their respective relations with China?

Taussig: The United States would like to have Europe on its side as it intensifies competition with China. There is no doubt that getting Europe on board with certain economic and technological measures would help the U.S. to build greater leverage over China. However, European countries see the U.S. approach toward China as too bellicose. For example, European countries have been unwilling to engage in the U.S.-China trade war or to ban Chinese technology company Huawei from developing European 5G networks.

Benner: It is slowly but surely dawning on Europeans that the rivalry between the U.S. and China will be the defining geopolitical challenge of this century. Rather than becoming a chessboard for great power games, Europe must become a player in our own right, with its own strategy. As things stand, it is far from clear whether Europe has the will, the capacity, or the cohesion to do so. 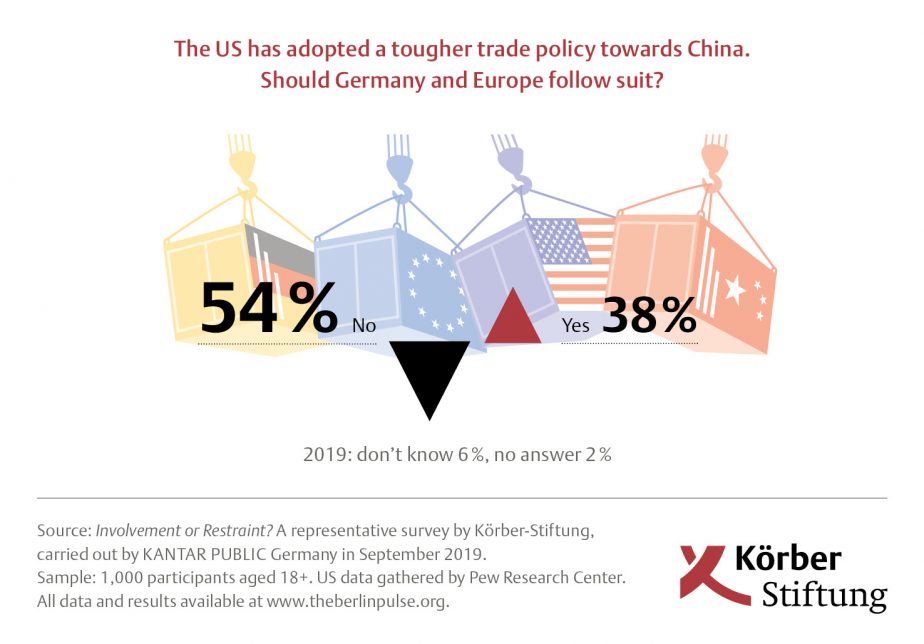 Körber-Stiftung: What makes it so difficult for the U.S. and the EU to cooperate strategically in facing China?

Benner: President Trump is attacking all three institutional pillars of our foreign policy –  the EU, NATO, and the WTO. For advocates of equidistance, this is a welcome excuse and further evidence that China may be the more rational actor. For European Transatlanticists, hedging remains the rational choice. Despite common interests, for Europeans to completely align themselves with President Trump’s America would be too risky. At any given moment, the president could turn on them.

Taussig: Europe also lacks a unified position on China. Some capitals including Brussels, Paris, and Berlin are getting tougher on China. But many member states – Greece, Hungary, Portugal – are more hesitant to take any steps that may upset economic ties with China. Washington and Brussels also disagree on what constitutes the best approach. The Trump administration has recently emphasized the idea of “decoupling” the American and Chinese economies. This is an unrealistic goal, and one that European political and economic actors – especially German industry – will resist.

Körber-Stiftung: Imagine a scenario of military conflict between China and the U.S. What would Washington expect from Germany?

Taussig: I do not think Washington expects a strong military response from NATO or individual European states. NATO military commanders have questioned whether there would be a legal basis for NATO to engage in the South China Sea, should a conflict break out there. Either way, NATO would be extremely hesitant to engage in an out-of-area conflict in the Asia-Pacific. Germany, in contrast to France and the U.K., does not have any military capabilities in the region.

Benner: I agree. But for sure, Washington would expect political and economic support from Europe.

The European response would depend on what triggered the confrontation and the broader state of transatlantic cooperation. If Chinese aggression (e.g. against Taiwan) caused the military confrontation, Europe would more likely support the U.S. But if by then the Atlantic alliance will have unravelled further, this would undercut a joint response.

Taussig: If transatlantic relations were in a less dire state, perhaps there would be support for European sanctions: freezing assets and inhibiting travel for involved Chinese actors. The ability to take away access to the single market ranks one of Europe’s strongest tools. Militarily, U.S. demands for Europeans to increase their defense budgets have been motivated in no small part by the need to free up U..S resources for the Asia-Pacific. In the event of a crisis, we would see U.S. military assets rapidly move from Europe to Asia. In such a case Washington would certainly expect Europe to fill the resulting gap. 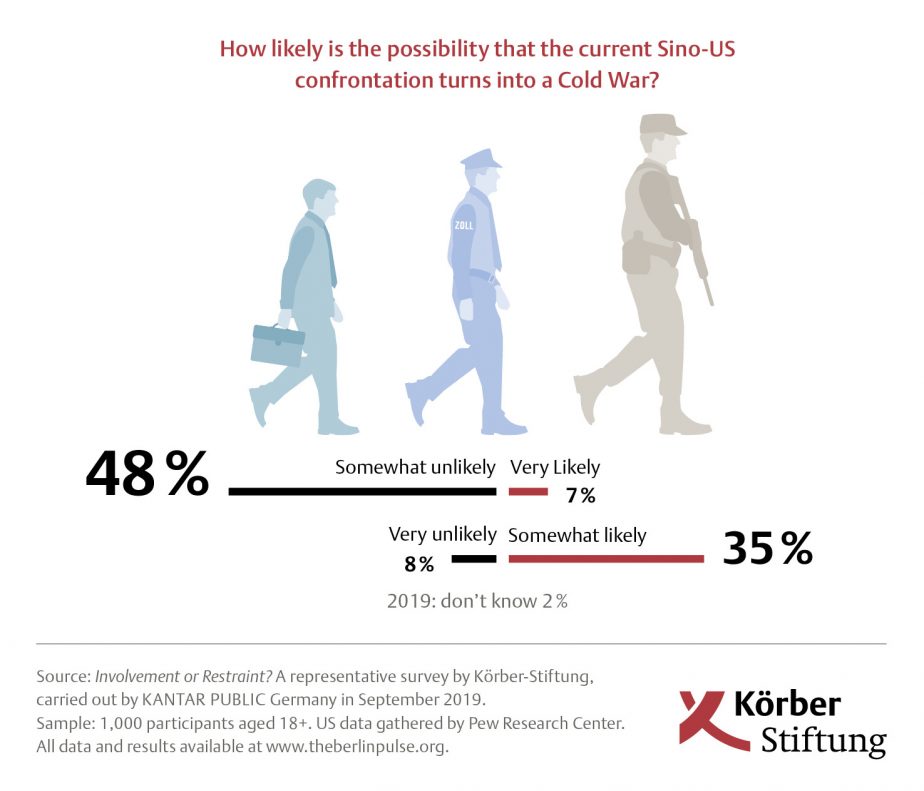 Körber-Stiftung: Do you think EU member states would be able to craft a joint response to a crisis in the Asia-Pacific?

Benner: Quite unlikely. China holds significant influence over a number of smaller European states, which are already hesitant to criticize Beijing. And German companies are too dependent on business in China. Today Germany finds it hard to protect its security and economic interests and help craft a unified European stance on 5G and Huawei. That makes me pessimistic about the prospects for EU unity in case of a real crisis.

Körber-Stiftung: In such a scenario, China of course would likely be quick to adopt counter-measures. How would Chinese sanctions trade with Europe affect the economies of Germany and Europe more broadly?

Taussig: Both sides could enact lower-scale measures on a tit-for-tat basis, but a full-blown trade war would be disastrous for both China and the EU. Ironically, neither Germany nor Europe is particularly engaged in enhancing security and stability in the Asia-Pacific. And yet, such a scenario would entail dire consequences for Europe.

Benner: Kinetic conflict between China and the U.S. would be a game-changer. Germany would be forced to choose sides. I am struck that major German companies – Volkswagen, BASF – are doubling down on their dependence on China. I wonder whether they have factored such a scenario into their risk calculations. More broadly, German & European diplomacy is not sufficiently focused on preventing both Chinese hegemonic aspirations and conflict in Asia-Pacific.

Körber-Stiftung: Returning to the real world: What is the potential for greater transatlantic cooperation under the Trump administration?

Taussig: We are unlikely to see closer cooperation under President Trump. If a new administration views China as a significant challenge, we may well see Washington extend an olive branch to Europe in the hope of getting European partners on board. That said, there are vested interests in Europe which are strongly opposed to a more assertive China policy.

Benner: I agree. Under the Trump administration, there is no solid basis for a joint agenda, but as Europeans, we must decide how we want to position ourselves on the Chinese party state. 42 percent of Germans perceive China’s growing international influence as neutral, which suggests to me that we are yet to have this debate. The European Commission simultaneously praises the EU’s strategic partnership with China and warns of Beijing being a systemic rival. This kind of schizophrenia cannot last. We need to decide which are the areas in which we need to cooperate with China, for example on climate and pandemics; which are the areas in which we oppose China; and how we want to structure our economic and technological (inter-)dependence.

Taussig: There are several areas in which Europe needs to reduce its dependence on Chinese investment and technology. Screenings of investments from Chinese and other authoritarian societies are not strong enough across the EU. This is one area in which Europe should bolster its defenses and ensure that it is not overleveraged to Chinese investments. Europeans and Americans should also provide alternative financing for countries in need of infrastructure and investment. China should not be the strongest player in the development space in Europe and its neighborhood.

The Difference Between America’s 2 Cold Wars

The Gulf States in China-US Rivalry