Abdul Jabbar sits under the porch of his only remaining room. He raises his finger in the air, pointing toward the sea and its waves breaking two to three meters away. “This had fed us for centuries but now we fear for our lives and our homes,” Jabbar says.

The boundary wall of his home had already fallen off by the end of October, after Cyclone Kyarr hit Ganz village. “If we get a meter or two more – nothing will remain. Not a block of our only room!” says the 60-year-old, before he walks a few steps closer to the waves.

As a fisherman, Abdul Jabbar has seen the frequency with which the sea water spills over large boats and hits the village. He has seen the village flood throughout his life, “but now the waves are getting stronger, higher, and closer year-on-year.”

Ganz is a small harbor village with a population of more than 2,000 people around 50 kilometers away from Gwadar, Pakistan’s strategically significant port city. Though Gwadar city has a pivotal role in the China-Pakistan Economic Corridor (CPEC) a flagship project of China’s Belt and Road Initiative (BRI), it has not much affected the local population of Gwadar city yet — let alone the villages nearby, which are not necessarily part of Gwadar’s master plan. Hence the villagers are left out of the development rush, even as they are most vulnerable to coastal hazards.

Cyclone Kyarr, which hit Ganz two months ago, was one of the most powerful tropical cyclones the Arabian Sea has seen in the last 12 years, according to NASA’s Hurricane and Typhoon Updates. On October 25, 2019, the cyclone formed near the southwestern coast of India and rapidly intensified into a strong storm moving toward Oman and the coastal belt of Pakistan.

Sameeh Baloch, an engineer working with Gwadar Development Authority, is also a resident of Ganz. “This village has the dubious accolade of being one of the most vulnerable villages in district Gwadar,” he says. “There are no mountains all through the east and northern part of the village, it’s where the cyclones hit harder.”

“Though a number of houses had already fallen off in the previous coastal cyclones, there are houses under water now and houses with no boundary walls,” he adds.

In a conservative Baloch locality, every house — small or big, made of cement or mud — is surrounded by boundary walls. It is a cultural symbol of honor and protection. But many, like Abdul Jabbar, cannot afford to rebuild these walls.

Immediately after the disaster, the Alkhidmat Foundation, a local nonprofit organization, surveyed the area. According to their data, most people demanded boundary walls before any other aid. “As we reported the survey analysis to our head office, we received 200,000 rupees [roughly $1,300] for providing temporary boundary walls made out of bamboo wood and fabric,” says Nadil Ali, the president of the Alkhidmat Foundation in Gwadar district. 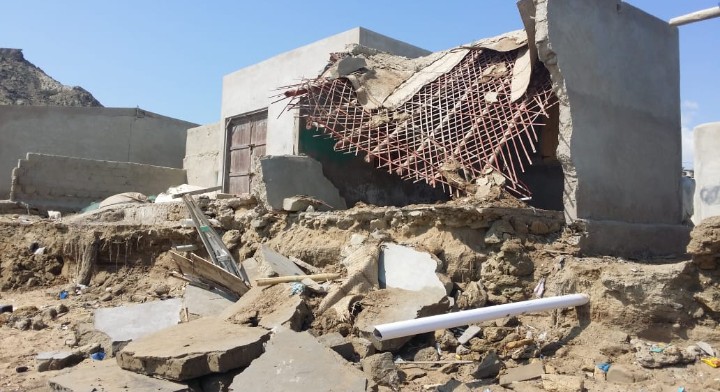 A collapsed house in Ganz village. Photo by Mariyam Suleman.

It is not only housing at risk when a place suffers from repeated coastal disasters. The economic impact cannot be overlooked. “It is obvious that we cannot go fishing when the coast is rough… many of our boats are shattered into pieces and our fishing nets flown away with the waves,” says a local fisherman.

“Despite being a high-risk area, there is an entrenched reluctance on the part of people to abandon their ancestral lands, the reason being fear of losing their coastal livelihoods and their homes or what little they own,” says Sameeh Baloch.

The local government has marked out an evacuation route, which was also used during the recent cyclone. However, if the population stays in the high-risk area, there is an immediate need to find engineering solutions to withstand disasters.

Baloch has a suggestion: “As long as the population stays here, for the time being, protection walls near the coast have to be created. Another immediate solution would be construction of a breakwater within the coast that would work as a seawall, not letting the water enter the village… [it] can also be used by the fishermen to safely berth their boats.” He points toward a similar breakwater constructed in the western bay of Gwadar city in 2016.

“However, for the long term, the entire village of Ganz has to be relocated to a safer location, for which we had written a letter to the local administration in 2016 through our community organization, Rural Development Society,” Baloch says. “Previously, there was not much support to our proposal but recently, the local administration seems more concerned.”

The additional deputy commissioner for Gwadar, Anees Tariq, says, “A protection wall is proposed, which could minimize the damage during such calamities. Further, contingency plans are in process for relocating the entire population of Ganz permanently to a nearby hill, Koh-e-Deedag. For this the provincial government is launching a project, which will soon be inaugurated.”

For the residents of Ganz, though, at the moment there is little choice but to stay in the high-risk area. Abdul Jabbar contemplates what might happen to his little village over the years if the latest government plans fail to secure enough funding or, even if they do get funding, if it takes longer for the construction work to begin.

“There is so much uncertainty in predicting when the next disaster might hit our village, collapsing more of our houses and breaking away more of our fishing boats.” says Jabbar, glancing out to the emerald green tides of the Arabian Sea.

By Kevin Chan and Munir Ahmed

Bilawal Bhutto-Zardari has called for debts owed by developing countries to rich countries to be written off, allowing them to spend that money on clean energy.

Where are South Asia’s Green Parties?

Pakistan’s floods highlight the dire risks of climate change in South Asia, so why is there so little Green politics in the region?

By Seth Borenstein and Sibi Arasu

The disaster is hitting a poor country that has contributed relatively little to the world's climate problem.