Kazuhiro Soda has a unique approach to documentary filmmaking that does not seek to expose the “local truth” of society. Instead, Soda focuses on everyday life and the people who live it. As Soda describes, “People think if you’re rolling a camera, you have some sort of theme or goal. Everyone has a theory for why this guy is focusing on him or her. It’s always the case that everybody feels that their life is normal and boring, no one would ever make a documentary about it. That’s how everybody usually feels. For me, anybody can be a star of a documentary because everybody has stories. Life is tough. It’s hard to survive everyday, and everybody has some sort of a drama. But we neglect it because we don’t look and listen carefully.”

Soda’s most recent release, Inland Sea (港町), is a black and white observational documentary hailed by Bong Joon-Ho, the director of Parasite, as “calmly stunning, quietly heartbreaking.” The film embodies Soda’s style while also depicting life of the elderly in the small fishing town of Ushimado, Japan.

Soda was born in Japan but moved to the United States to study filmmaking. He joined an American company producing programs for NHK, a Japanese TV network. Much of his work centered on documentaries aired in Japan, but he grew frustrated with the approach. Even though the films were documentaries, the filmmakers conducted research before shooting; wrote a detailed script including a beginning, middle and end; and even wrote narration before shooting. As Soda puts it, “you know exactly the blueprint of the programme before you even roll the camera. You get approval from layers of producers and the bureaucracy, so once it gets approved, it’s hard to do anything else.”

This is common documentary practice and not specific to Japanese television, but it made Soda realize he wanted to leave the industry in search of more “wild media,” where you aim your camera at people and make a story out of richer, more unpredictable content. Based on his definition of documentary filmmaking as “an art form in which a filmmaker can share his or her own experience with the audience,” Soda laid out what he calls the “10 commandments” of observational filmmaking:

These commandments are radical to filmmaking in many ways, but allow Soda to execute his vision of reconstructing his own experience into a cinematic reality he can share with the audience. Labeled “Observational Documentary #7,” Inland Sea joins Soda’s other explorations into life as it is. While Inland Sea is set in Ushimado, Japan, a small fishing village east of Okayama, Soda believes observational documentary is an effective medium to document any culture. By making films according to his observations, Soda wants the audience to observe and interpret in their own way. 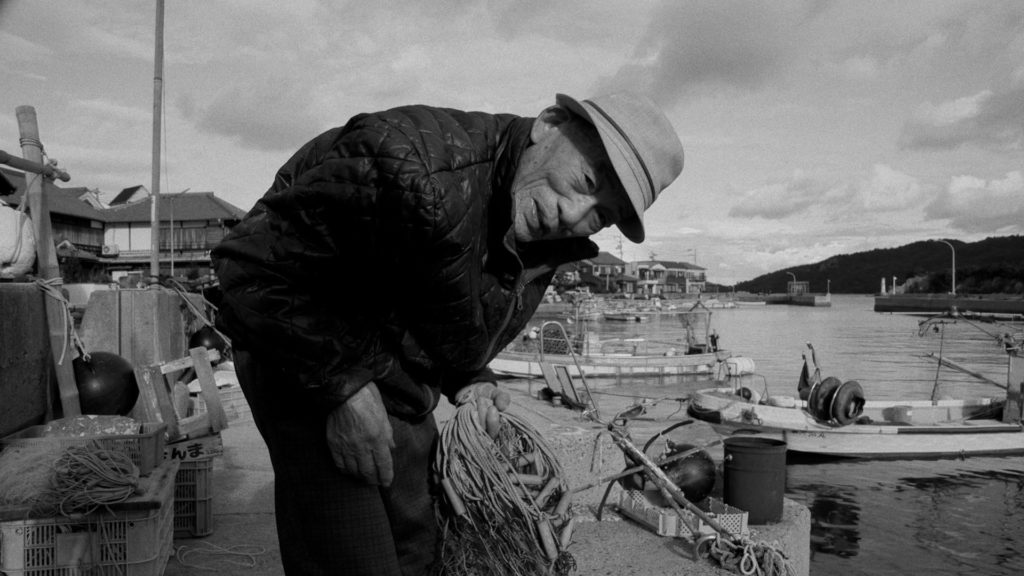 Soda and his producer and wife, Kiyoko Kashiwagi, are part of the film itself. While we don’t hear Soda’s voice, many scenes capture his feelings from behind the camera. In comparison to Soda’s second commandment, TV usually features preliminary interviews; but Soda wants to capture the freshest and most spontaneous actions and conversations. “If I ask the same question a second time on camera, responses are less fresh,” says Soda. “It’s like a second brew of tea. So whatever you hear and witness in Inland Sea is something I am learning for the first time. If you’re surprised as an audience, I’m surprised.”

Soda did not choose Ushimado by chance; Kashiwagi’s family is from the town, and Soda fell in love with it after many trips to the area. The concept for Inland Sea was borne of spending time with the local fishermen. As Soda describes, “Kashiwagi does Tai chi on the shore and all the curious fishermen started talking to her. She often brought home some fish — catch of the day — from the local fishermen. We talked about fishermen at home while having dinner or lunch. I realized that older fishermen were getting into their 70s or 80s, and I learned they have no successors.

“This means in 10 or 20 years from now we might not see any fishermen in Ushimado, which is a striking idea. For me, a fisherman is a sort of fixture, a regular thing to see in Ushimado. I realized this fishery was becoming unsustainable. If that’s happening in Ushimado, maybe this is happening across Japan. What will happen to Japan without fishermen? I wanted to record and depict it before everybody’s gone.”

Inland Sea follows the life cycle of this local fishing economy, from its origins with a 86-year-old fisherman reeling in tangled rockfish in the early hours of the morning; to a fish auction with local shopkeepers; to a local store where the fish are skinned, prepared, and sold to neighbors; to feeding leftovers to stray cats. In the process of collecting this footage, Soda stumbles across darker stories hidden in its narrow alleys.

Inland Sea happens to focus on the elderly in Ushimado, and one woman featured in the film believed Soda was filming her because she is “late-stage elderly,” a category in the Japanese healthcare system referring to people 75 years and older and spurned by Japanese of all ages. “She was interpreting the reason why I was focusing on her was because I had an agenda to depict her as an elderly who was still working,” says Soda. “People focus on big tragedies and big news, but I am more interested in how we live everyday. We make decisions every moment that shape our lives, and that shapes our society. So called ‘normal people’ — not the typical subjects of documentary — are the body of society. We tend to neglect that and forget about the fact that we — regular people — are the ones who are creating and driving society. I am interested in depicting everyday life with a camera and sharing it with the audience because it gives you insight about society and about our life. But you need to really listen and look carefully to do that.”

The missing Japanese make up about half of the 2.4 million soldiers who died overseas during Japan's military rampage across Asia.

Tokyo Has No ‘Plan B’ for Another Olympic Postponement

Organizers are proceeding under the assumption the Olympics will open on July 23, 2021.

Too keep people from gathering, Japan has taken the flame to an undisclosed location.

New Delhi is clearly making a push to expand its capabilities in the critical semiconductor industry.