As 2019 draws to a close, I can’t help but reflect on the important anniversaries that took place over the last year, such as 40 years of U.S.-China diplomatic relations and 70 years since the founding of the People’s Republic of China. For me, 2019 was an important personal milestone as well. It marked 70 years since I first arrived in the United States from China. Stepping off that plane, I had no idea how my life, China, and the U.S.-China relationship would change in the years to come, in ways I never could have imagined as a teenager off to pursue an education.

Seventy years is a long time, especially when I originally intended to return to China after graduating college. Of course, circumstance had different plans for me. When I left China, the Nationalists were still in control and the United States and China were strong allies. Soon after arriving in the U.S., however, the Communists declared victory and the Nationalists retreated to Taiwan. The U.S. and China became embroiled in the Cold War and China suffered through the Great Leap Forward, which would later be followed by the Cultural Revolution.

To me, it seemed like overnight the entire world had changed. My family still lived in Beijing, but after facing years of Japanese occupation, followed by civil war and the establishment of a New China, the country around them was different. I, on the other hand, was adjusting to my new home, working to embrace my own version of an American Dream. While I thought of my family often and wondered what the country of my birth was like now, I was simultaneously awed and humbled by how accepting and welcoming I found my new home. 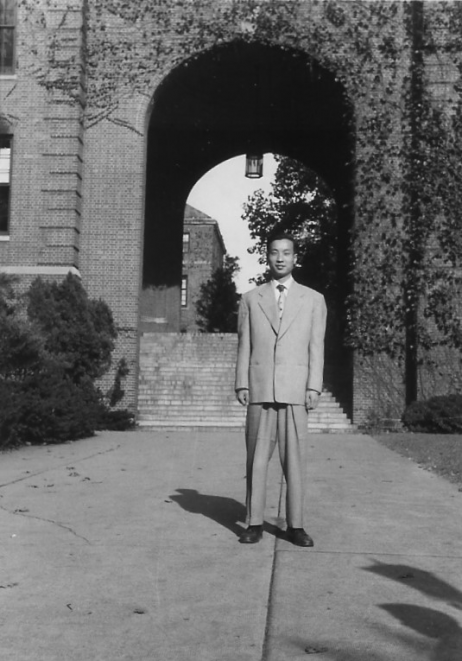 Today, as the relationship between the United States and China becomes increasingly tense, new Chinese immigrants face added scrutiny and some even question the loyalty of American-born Chinese. Given my own positive experience moving to the U.S., the uncertainty felt by many today is especially saddening. Even during the height of the Cold War, I was surrounded by Americans who, although curious about my background, chose to learn from and embrace those differences rather than fear or condemn me for them.

Out of a sense of gratitude to the Americans who helped me find my foothold and a growing pride in my new country, I chose to pursue a career in the U.S. government. I worked at the U.S. Department of State and then the U.S. Library of Congress for nearly 50 years altogether. During that time, I was also an adjunct professor at Georgetown University, teaching Chinese history and U.S.-China diplomacy. I eventually became the head of the Chinese and Korean Section at the Library of Congress, allowing me to use my background to further the knowledge and understanding of the Members of Congress, scholars, and other Americans who came to the Library of Congress with questions about China.

I always enjoyed the genuine interest and curiosity of those who came to see me at the Library of Congress. It is this thirst for knowledge that leads to understanding. And it is greater understanding that allows people to see past their differences and find a path forward. It is a lesson that I hope policymakers in both the United States and China will remember today.

Despite the current challenges the U.S.-China relationship faces, there is still hope. Coming from the perspective of an old man who has witnessed over seven decades of changes in each country and in their bilateral relationship, this is not the first time relations have been strained. Nor, I’m sure, will it be the last. China is a vastly different place than it was when I first left in 1949. And, although the changes might not seem as apparent, the U.S. has changed as well.

With change comes a need to reflect, evaluate, and adapt. This takes time, patience, and an open mind. It took 30 years for the United States and the People’s Republic of China to establish official diplomatic relations – but it did happen. Leaders like Richard Nixon, Jimmy Carter, Zhou Enlai, and Deng Xiaoping found ways to look past the very real differences between our two countries and see potential for the future.

Once again, we are in a period of uncertainty and change. China, the U.S., and the global climate as a whole are vastly different than they were during the Cold War era. There is no denying that China is much stronger and more influential than it was in 1979 when Chinese leaders depended on the fledging relationship with the United States to help make their economic reform efforts a success. Then, China was starting to re-enter the global system. Now, China is one of its leaders.

The U.S., too, finds itself in a very different position. It is no longer embroiled in a Cold War with the Soviet Union, nor is it still the sole hegemon it became after the Soviet Union fell. More countries have louder voices in international affairs, such as the EU and BRICS. The U.S. also faces increasing internal debate over how active a role it should take in world, in some cases stepping away from longstanding responsibilities and leaving a vacuum that China is only too happy to fill.

As tensions continue to rise, it is important to take a step back. We need to evaluate the global situation and each country’s role in it with our eyes open, realistically looking at the way things are instead of reacting as if nothing has changed. We cannot move backwards. We need to realize that due to globalization, increased technology, and even the internet, our countries and people are more intertwined than ever. The stakes are high and the U.S.-China relationship has major, global repercussions. We need a reasoned, forward-looking, balanced approach to the U.S.-China relationship to prevent it from deteriorating further and causing negative ripple effects the world over.

The U.S.-China relationship has adapted, grown, and strengthened in the past. It has overcome periods of strain, disagreement, and even animosity. I’ve witnessed this myself. The U.S. and China can certainly do this once again. Both sides just need the will, motivation, and perspective to make it a reality.

Dr. Chi Wang is President of the U.S.-China Policy Foundation and previously served as the head of the Chinese section at the Library of Congress.

As China-US Ties Continue to Fray, Can Their Ambassadors Make Repairs?

Is Biden Bringing ‘Strategic Ambiguity’ on Taiwan to an End?

Despite his recent gaffes about U.S. policy toward Taiwan, Biden's caution and conservatism are likely to carry the day.

Bob Dole and a Lost Era of China-US Cooperation

Like the late Senator Dole, the Greatest Generation had a unique memory of World War II-era alliance between the U.S. and China.

19 Months Into the Pandemic, China Is Still Shutting Out US Students

Beijing’s lack of foreign student reciprocity poses a major threat to the long-term future of the China-U.S. relationship.