TASHKENT — Leading with a “good neighbor” policy and economic liberalization, the administration of Uzbek President Shavkat Mirziyoyev has marched forward under the banner of reform since late 2016. This week, as the country approached parliamentary elections, The Economist announced Uzbekistan as its country of the year, the most improved the world over.

But while the drumbeat of progress is persistent, it is not always steady. And not all ears hear the same tune. The process of reform is complex and attempting to distill it down to a single narrative is impossible. Doing otherwise reeks of hedging, but reflects the messy truth.

A perfect example of this has come to the fore in the days ahead of the parliamentary polls. In Tashkent, you can find both tremendously excitement about the election and also extreme apathy. We see this diversity of opinion among analysts and observers also.

U.S. Ambassador to Uzbekistan Daniel Rosenblum told The Diplomat in an interview that going into the December 22 parliamentary elections expectations were (and for many still are) low. But the diplomatic community, at least, has been “pleasantly surprised at the degree of openness and the degree of competitiveness that we’re seeing, as relatively limited as it is.”

Sunday’s election will be Uzbekistan’s first parliamentary poll since 2014 and is an opportunity to inject possible life into the body.

Uzbekistan has never held an election deemed by Western observers to be free and fair, including the 2016 election of Mirziyoyev. Mirziyoyev served as prime minister for 13 years under Uzbekistan’s first president, Islam Karimov, and had taken over as interim president following Karimov’s death in the fall of 2016.

While Rosenblum commented that “the political reform [in Uzbekistan] has lagged behind other reform areas because it is the most difficult,” others see the matter of “politics” in a different light.

Jennifer Murtazashvili of the University of Pittsburgh told The Diplomat, “We think of political reforms as those actions taken by the government in the formal political sphere. If we take a broader view of politics, we see [an Uzbek] society that is quite active in policy and politics.”

Such comments are not necessarily  in contradiction; they merely reflect a focus on different levels and kinds of politics.

In enhancing civil liberties and freedom of speech, Murtazashvili said, “Citizens and civil society are emerging as an important veto player on policy issues on an ad hoc basis — it’s just that civil society is not registered as a formal NGO.” An important example is the government’s tolerance of public outcries against property demolitions over the summer, she said. “The fact that the government has allowed this on such a widescale basis continues to surprise me. The tolerance for such freedoms is a very significant political reform.”

The 2019 parliamentary election is being carried out in a more open environment and it shows. It’s also clear that despite progress, there is a long way to go for Uzbek democracy. 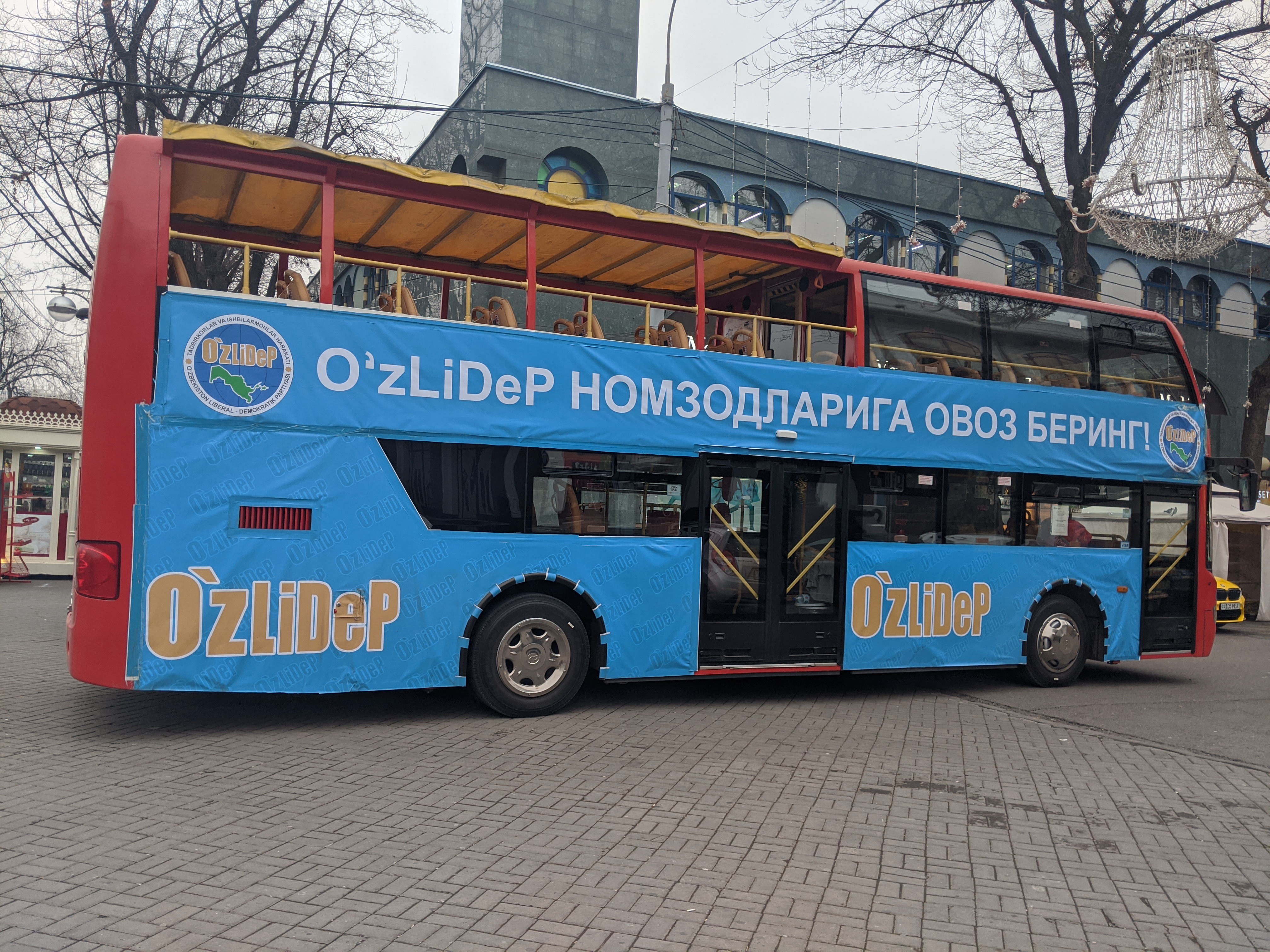 Parked outside the Zarafshon Concert Hall on the afternoon of the final debate were two O’zLiDeP party buses. Photo by Catherine Putz.

Speaking with The Diplomat after the close of the final televised debate between party leaders on Thursday afternoon, Zabikhulla Saipov, a member and a nominee of Milliy Tiklanish for the Tashkent City Council, said, “People were very afraid to talk about these political issues [in the past]… But now what Uzbekistan has achieved is that the fear is receding, going back. What we have to overcome right now is the lies. The lies of the state, statistics, about everything, even very mild issues.”

Just as Rosenblum noted low expectations among the diplomatic community, Murtazashvili said that in her conversations with officials and some members of parliament, “there is an expectation that this election will bring into power a new generation of parliamentarians, not wholescale reform that includes a genuine opposition.” 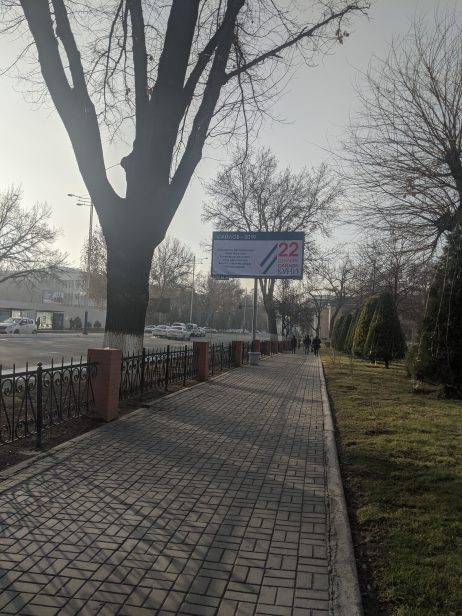 A general election poster rises above a main road in central Tashkent. Photo by Catherine Putz.

In Tashkent, there are a number of election billboards along major roads advertising the date, but far fewer posters for specific party campaigns. The frenzied fanfare of elections witnessed in Western democracies is largely absent in the Uzbek context, although there have been some changes in that regard as well. The televised debates have been a new addition to the political spectacle in the country. Election officials and candidates have been more willing to interact with journalists, and face tougher questions in more public settings than ever before.

But the five parties that are contesting the polls are all pro-government; no opposition parties were registered and no independent candidates are running. Such shortcomings preclude the election being heralded as completely free and fair. But these issues are being discussed, openly, by people and officials and that’s another mark of progress.

The debates, of which there have been almost 30, have included some lively exchanges between parties and between journalists and party leaders. While a wide range of topics have been covered in the debates — from economic issues to (some) human rights issues and questions about the lack of opposition — the parties still struggle with the specifics of policymaking and with differentiating themselves from each other. As each party presents itself as representing a faction of society — for example, O’zLiDep positions itself as the party of entrepreneurs and business — they don’t easily set against each other on specific policy choices.

Saipov commented that “sudden openness and uncensored live TV and radio coverage also revealed certain parties’ immaturity in political astuteness, charisma, and sound judgement in a number of urgent issues of both domestic and foreign policy.”

There seems to be an awareness among those involved in the election process that there is far more work to be done.

Rosenblum noted that the head of the Uzbek Central Election Commission recently commented on the reality that further changes will need to be made to Uzbek election laws, including the inclusion of new and opposition parties and independent candidates. Such discussions reflect contemplation of criticisms in the run-up to the election that, as Rosenblum phrased it, “the process needs to be opened up more from the beginning in order to give the electorate some real choice.”

While the government is extremely enthusiastic about the polls, average Uzbeks appear more circumspect, many trending toward apathy. This is not unique to Uzbekistan, necessarily, but to drive interest and attention in the formal political sphere, the legislative process, the parliament must become a relevant actor.

As Bruce Pannier wrote this week, “The country’s previous parliamentary elections have all been practically nonevents.” The resulting parliaments were rubberstamp bodies showing little independent initiative in the policymaking sphere. Fear may have receded, as Saipov commented, but it has yet to be replaced with boldness and confidence.

Nevertheless, Rosenblum said, “No matter what, these elections will be a step forward, a very positive step forward in the evolution of democracy here.”

“What have we learned from the past 25 years of ‘transitions’ is that the process of reform is very difficult,” Murtazashvili said. “Uzbekistan continues to move forward. Maybe it is not as fast as some would like… It is a lost opportunity that these creative and constructive [civil society] voices are not yet part of the formal political process.”

Ultimately, Sunday’s vote is just the starting pistol: The hard part comes after, when either the parliament takes initiative in the legislative sphere or it does not. Expectations may be low for how “free and fair” an opposition-less election can truly be (it can’t, by definition), but other expectations are high and the costs of disappointment is the loss of momentum in the overall reform program.

“The long-term opportunity for the Mirziyoyev government is how it will deal with the expectations for both political and economic reform that it itself has raised,” Murtazashvili told The Diplomat. “He has raised expectations of citizens — who clearly understand that they are facing limited competition — that things will change.”

By the numbers, Uzbekistan's new parliament is very much like the previous one.

After a Smooth Election, Real Challenges Still Ahead for Uzbekistan

Some voters in Tashkent have high hopes while others are more cynical that the flashy election will result in a new kind of politics.

The apparent dismissal of Rustam Inoyatov, who lost his long-held post as head of the Uzbek security services back in 2018, moves a former kingmaker off the board.