Last week, the U.S. Air Force and Northrop Grumman released the first official renderings of the nuclear-capable B-21 Raider beyond a lone piece of nonrepresentative concept art released back in 2016. The new renders are still described as a “concept,” but appear much more detailed than the one released in 2016. As my colleague Franz-Stefan Gady discussed, the Raider is positioned to succeed the existing generation of strategic bombers in service with the U.S. Air Force, including the B-1B Lancer, B-2 Spirit, and B-52H Stratofortress (the latter two are nuclear-capable today). 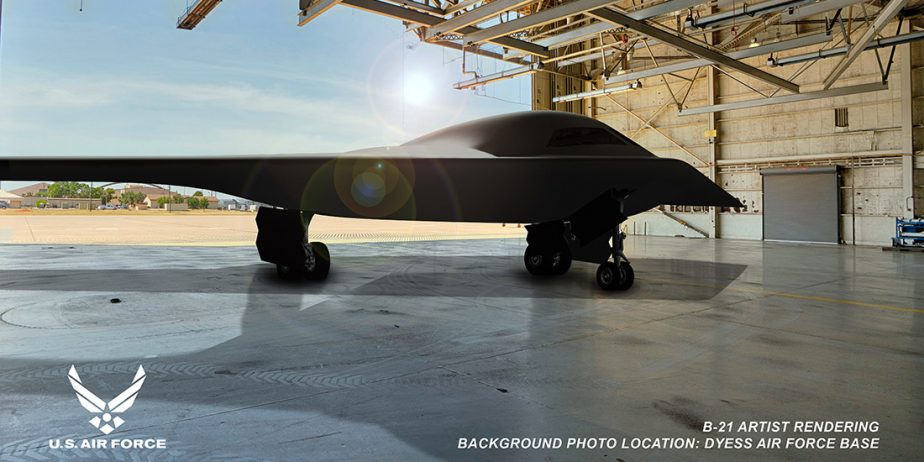 This is an artist rendering of a B-21 Raider concept in a hangar at Dyess Air Force Base, Texas. (Courtesy graphic by Northrop Grumman)

The released renders offer aviation enthusiasts the first look at what this new bomber might look like in practice. The B-21 is expected to bring together major advances in low-observable aircraft design. The rendering, however, shows that the basic design philosophy of the B-21 is iterative on the B-2, which was developed during the Cold War and remains a highly capable low-observable platform.

The new renders don’t dramatically depart with the earlier concept art in two major ways: the location of the new bomber’s cockpit and its overall triangular blended wing fuselage resemble the B-2. A little more than 30 years after the first flight of the B-2, the aircraft’s design remains influential. (The B-2 has since undergone modernization and upgrade of its own, mainly pertaining to its electronic warfare capabilities and on-board computation and avionics.)

One of the biggest design differences apparent in the new B-21 renders is the change in the engine inlet configuration. Unlike the B-2, which featured flattened, horizontal inlets on either side of its cockpit, the B-21‘s inlets are flush, which should reduce radar returns and increase the aircraft’s overall stealthiness. The rendering doesn’t contain enough detail to determine what kind of inlet duct configuration was used, but this inlet design difference sets it apart from the B-2 in a distinct way.

Another major difference between the B-2 and the B-21 seen in the new renderings is the contour of the aircraft’s nose. The new aircraft features a more pronounced nose section, with the nosegear appearing further back than on the B-2. This may have both aerodynamic and stealth benefits. Notably, this feature did not appear in the original 2016 concept art of the B-21.

Over at The Drive, Joseph Trevithick and Tyler Rogoway observe that the B-21 is likely to feature a low gross weight as a result of its landing gear configuration. “The B-21’s main landing gear are two-wheel designs, rather than the four-wheel ones found on the B-2. This reflects the Raider’s lower gross weight and smaller overall size than the Spirit,” they write. The landing gear configuration between the two bombers is similar, featuring one nosegear and two main gears.

It’s still unclear when we’ll get a first good look at a real prototype or production unit of the B-21, which continues to be developed with a high level of secrecy as critical stealth platforms often are. The B-21 may see early flight-testing as early as next year.

Senior US Defense Official: Development of B-21 Stealth Bomber ‘on Schedule’

The first test aircraft is already under production and expected to make its maiden flight in December 2021.

US Air Force Releases Images of B-21 Stealth Bomber

The renderings show the B-21 in hangars at three locations in the United States.

The first F-15EX fighters are expected to complete production next year.