In stark contrast to the medical nationalism of the United States and some other Western countries, a small Caribbean nation has emerged as a beacon of international solidarity in the global war against the coronavirus. Cuba has set an improbable record, sending medical teams to 19 countries in less than two weeks.

In spite of crippling U.S. sanctions, Cuba has still succeeded in playing a key role in the war against COVID-19. They have sent new medical teams to 19 countries including Italy, Andorra, Angola, Jamaica, Mexico, and Venezuela — a total of about 900 doctors and nurses so far, with requests from Argentina and Spain and others in the pipeline.

Cuban medical teams previously saved many lives after some of Asia’s worst natural disasters, including the 2004 tsunami in Sri Lanka, the 2005 earthquake in Pakistan, and the 2006 earthquake in Indonesia.

Dr. Oscar Putol, a member of the mission treating the victims of the 2006 Indonesian earthquake, explained their operations: “Today, a volcano; tomorrow, an earthquake; the day after, floods. Cuba is prepared to go to any country to help.”

But very little of Cuba’s remarkable history of sending medical teams to Asia and the world – including now, amid the COVID-19 pandemic — is covered by the Western mainstream media. 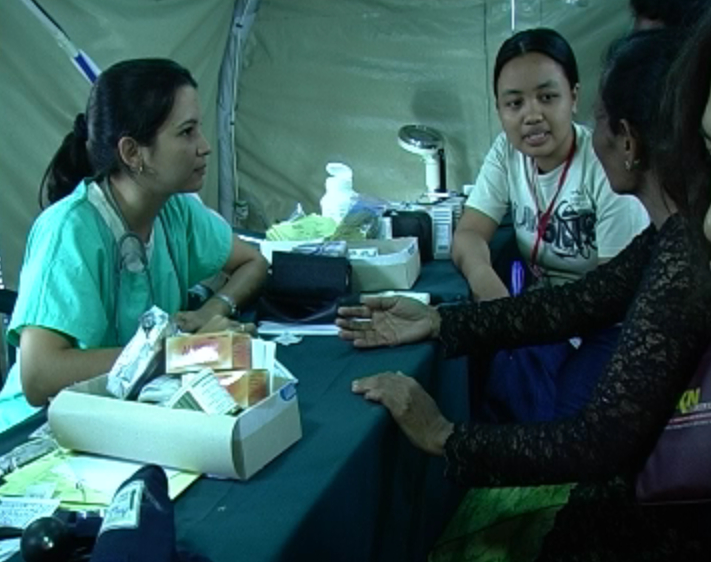 Cuban doctors with Indonesian patients inside a field hospital set up after the 2006 Java earthquake. Photo by Tom Fawthrop.

Cuba in Asia: COVID-19 and Beyond

The former president of Timor-Leste, Nobel laureate Jose Ramos-Horta, previously praised Cuba for building a public health system from the ground up after his country’s independence in 2001. In a presidential statement, Ramos-Horta declared, “Timor-Leste has many nations as real friends, but I must ask: what greater gift can we receive than a guaranteed health system for our people? This is the gift from the people of Cuba.”

In addition, one Cuban anti-viral treatment, interferon alfa-2b, was extensively used by Chinese doctors in Wuhan treating the novel coronavirus.

It was easy for Chinese medical authorities to access the Cuban anti-viral drug as since 2003 it has been developed by Changchun Heber (ChangHeber), a Cuban-Chinese joint biotechnology venture in Jilin province.

Cuban expert Dr. Luis Herrera Martínez, who works for Cuba’s CIGB center of biotechnology, explained that interferon alfa-2b “prevents aggravation and complications in patients, reaching the stage that can ultimately result in death.”

The drug was used with two anti-viral HIV drugs, lopinavir and ritonavir, to treat COVID-19 patients in Wuhan, leading to its inclusion in drug trials now being coordinated by the WHO.

However, one study warned that interferon could only be safely used in dealing with mild symptoms in the early stages of the COVID-19 virus.

Cuba first deployed interferon back in 1981 to arrest a deadly outbreak of the dengue fever that affected 340,000 Cubans. That experience catalyzed the development of the island’s highly innovative biotech industry, according to Glasgow University lecturer Helen Yaffe, a Cuba specialist.

“Cuba’s IPK [the International Pedro Kouri Institute of Tropical Diseases] is respected throughout Latin America and beyond,” says Professor Paul Farmer, professor of medical anthropology at Harvard Medical School. “With a comparatively tiny budget — less than that, say, of a single large research hospital at Harvard — IPK has conducted important basic science research, helped develop novel vaccines, trained thousands of researchers from Cuba and from around the world.”

Cuba’s biotechnology expertise has long been attractive for Asian countries, resulting in joint venture agreements with China, Singapore, and Thailand. In addition to the ChangHeber plant, Cuba has another joint venture manufacturing plant, Biotech Pharmaceutical Company Ltd., in the Beijing Economic and Technological Development Zone. The plant was set up in 2000 and produces biopharmaceuticals to treat head, neck, and ear cancers.

Meanwhile, the China-Cuba Biotechnology Joint Innovation Center was officially inaugurated in Hunan province in January – just as the COVID-19 pandemic was heating up in neighboring Hubei. According to the Cuban embassy in China, the center “will develop 100% Cuban projects and technologies.” 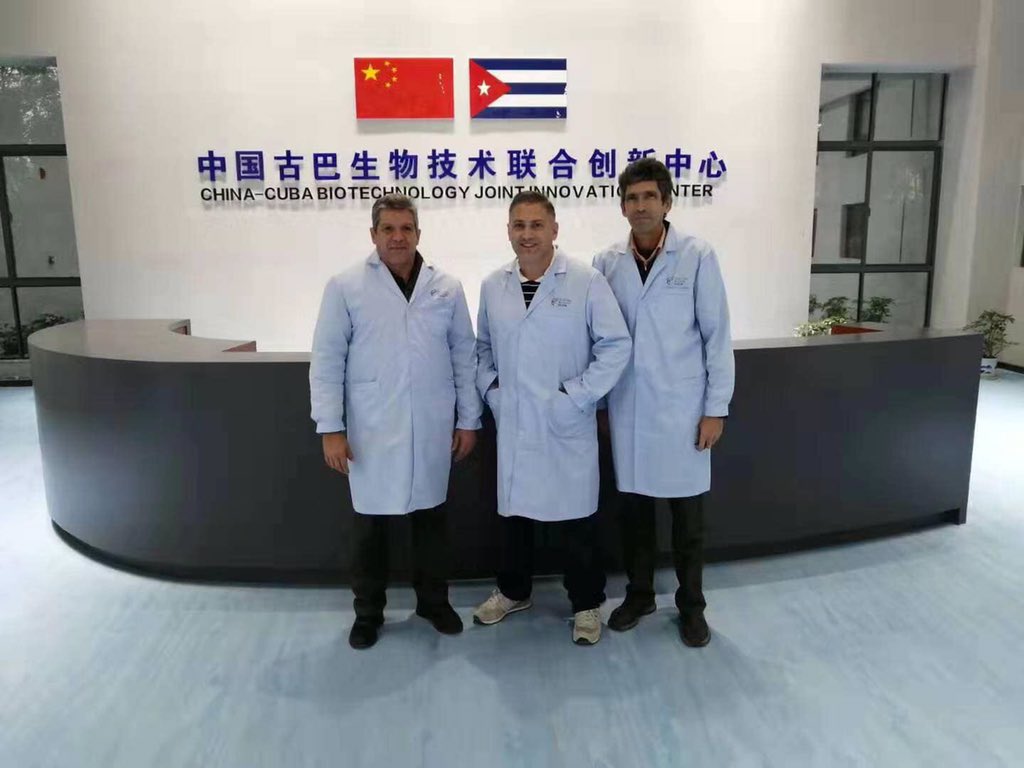 Before the full impact of the COVID-19 pandemic hit Thailand back in February, Siam Bioscience Group and the Center for Molecular Immunology (CIM) in Cuba had announced progress in jointly developing monoclonal antibodies to treat cancer and auto-immune diseases. Their MOU was first signed in 2017.

Siam Bioscience became the first joint venture partner with Cuba in the Southeast Asian region for the transfer of biotechnology expertise and the establishment of a manufacturing plant for medical products.

Other biotechnology MOUs have been signed with Singaporean, Malaysian, and Japanese companies. The Cuban anti-cancer drug nimotuzumab in particular attracted several MOU agreements, including one with the Japanese company Daiichi Sankyo that took the Cuban drug all the way to stage 3 of international clinical trials, before it was dropped in 2014. It is extremely difficult for innovative medicine from Global South countries like Cuba to pass all the protocols to gain entry to the lucrative Western drug market largely dominated by U.S. and EU corporations.

Where a Japanese company failed, Thailand might succeed, thanks to a very different joint venture model that only targets Thailand and the ASEAN pharmaceutical market.

According to Songpon, “the prices of medicines produced by the company will be 50 percent lower than those of expensive imported drugs from developed countries, letting Thai patients access higher-quality medicines at a lower price. The plant will also help Thailand prepare its medical services and social welfare for the upcoming aging society, and improve the quality of life of Thais.”

This agreement also establishes Siam Biotech as the leading company in ASEAN for biotechnology and biosimilar production, also known as generic drugs.

Since the outbreak of COVID-19, Cuban medical aid has been sought by more than 40 countries. But the island has always had its critics – most notably, the neighboring United States.

Similarly, the U.S. State Department tweeted that the Cuban motive for sending doctors on international missions to help with the COVID-19 outbreak was “to make up the money it lost when countries stopped participating in the abusive program.”

In an interview with local press, Dr. Carlos Pérez Diaz, the Cuban team leader in Italy, refuted that. “We are only here to collaborate based on our solidarity,” he said. “The Italian government has assured room and board for us, but no payment has been discussed.”

Nor is the Cuban government likely to gain financially from Cuban flights going to the aid of impoverished Caribbean Islands including Antigua, Barbados, and St Kitts.

Cuba’s reputation on the world stage as a major provider of medical services to countries has been vindicated by UN recognition, including an award in 2017 for Cuba’s Henry Reeve International Medical Brigade “in recognition of its emergency medical assistance to more than 3.5 million people in 21 countries.”

But awards and international goodwill on their own will not solve Cuba’s increasing food and fuel shortages at home. Surviving ever-tighter sanctions and helping poor nations ravaged by COVID-19 at the same time is a tall order, even with some support from China and Russia.

Still, the effort could reap dividends even beyond the satisfaction of saving lives. In the post-COVID future, many more countries in Asia may feel the need to tap Cuba’s expertise, both as a joint venture partner to produce cheaper medicine and as a useful model in building more resilient public health systems

Tom Fawthrop has reported for The Economist, Guardian, and the BBC on various aspects of the Cuban health system, including biotechnology, preventive healthcare. He also directed the documentary “Healing Africa: The Havana Prescription” based on Cuba’s comprehensive medical aid program with South Africa.

Economic pressures and household debt are taking a toll on the Sultanate's population.

The locals of Gwadar have little to show from the China-Pakistan Economic Corridor – except for broken promises.

Scholars warn that the number of people driven to suicide by economic hardship could exceed the number of COVID-19 deaths if the government doesn’t react.

Opposition Leader Lee Jae-myung at the Center of Criminal Probes

In an unprecedented move, the leader of South Korea’s main opposition party has been summoned for questioning.

Modi Government Raises Spending on Job Creation Ahead of Election

While the budget provides respite to the middle class through tax relief measures, the 30 percent cut in spending on rural jobs programs will hurt the poor in India’s villages.