In 2015, Pakistan approved the purchase of eight Hangor (Type 042 Yuan-class) submarines with a provision to construct four at Karachi Shipyard with a possible Transfer of Technology (ToT) from China.

Subsequently, in 2016, Pakistan awarded the Agosta 90B Submarine Modernization Project worth $350 million to Turkey-based weapon manufacturer STM. Interestingly, this was the first time Pakistan has selected a Turkish company as the prime contractor for a submarine project. Under this project, STM will be exporting design and engineering services to the Pakistan Navy.

The submarine deals with China and Turkey are expected to be a major game changer for the Pakistan Navy. Along with that, Pakistan is now focusing on building new midget submarines for its Navy.

Pakistan’s Special Service Group (Navy) has been using the Cosmos MG110 midget for overt and covert operations. These submarines have been in service from the early 1990s and are nearing the end of their service lives.

In order to replace these aging submarines, Pakistan has proposed to build a new midget submarine. In the Ministry of Defense Production (MoDP) Year Book  2015–2016, Pakistan listed the development and construction of a midget submarine as a target for 2017–2018. The MoDP documents have also mentioned that midget submarine project will be based on indigenous design and production.

Notably, a recent satellite image (Figure 1) confirms that Pakistan might have indigenously developed a new midget submarine as it proposed in the MoDP 2015–2016.

From 2016 on, one can see the submarine partially covered in a tent in. Since 2019, the submarine can be seen in open view, suggesting that the construction is near completion and that sea trials may have commenced.

The new midget submarine, which is compact in size, is leading to speculation regarding its possible role in the Arabian Sea and in combat. 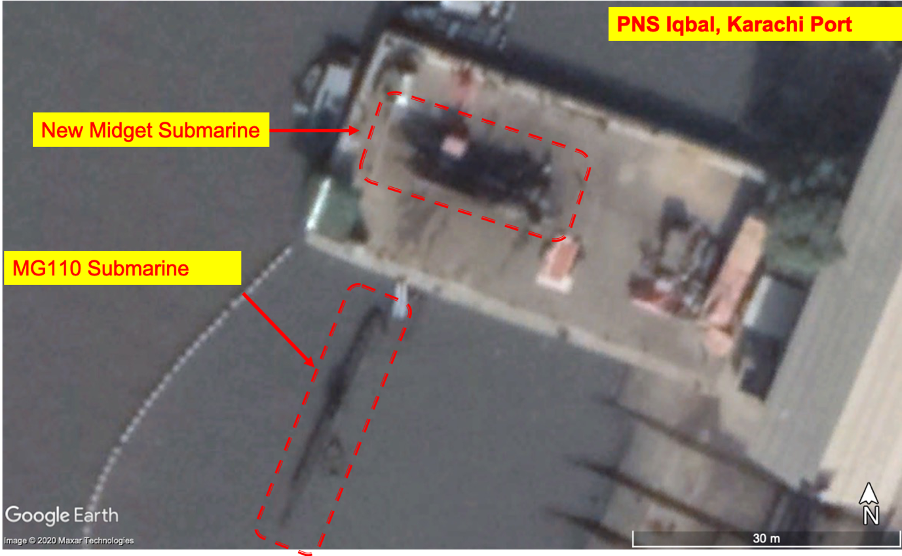 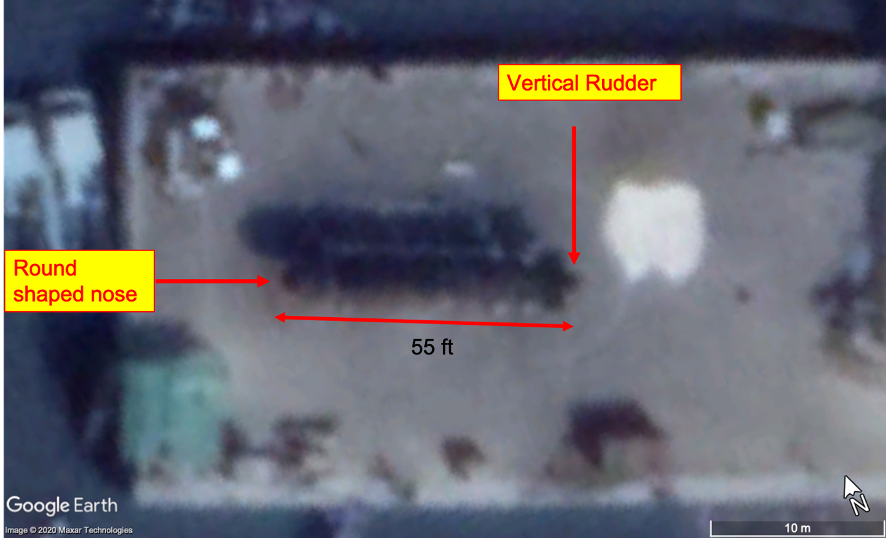 The midget submarine as seen from the satellite images has a length of around 55 feet (16.7 m) and a beam measurement of around 8 feet (2.43 m). The vessel’s displacement is currently unknown.

The prominent vertical rudder, propeller, and the round-shaped nose are visible from the shadow of the midget submarine. The snorkel is not visible in the image. But it is clear from the image that the submarine appears to be larger than the Swimmer Delivery Vehicle (SDV) and slightly smaller than the MG110 midget submarines.

The compact size of the submarine with simple hull constructions suggests that it is easy to operate and maintain. The vessel can likely be transported over land due to its size. The defense expert H. I. Sutton writes in Forbes that the submarine design is new and doesn’t appear to be an imported one.

Given the present level of cooperation between Pakistan and Turkey, one cannot rule out the possibility of a Turkish firm’s involvement in the development of new midget submarines. In an interview in 2019, Murat İkinci, the general manager of STM, confirmed that the “Pakistan Navy and STM are currently discussing new projects, including serious and dedicated works for midget submarines.” However, there are no official sources to confirm that the new midget submarine has been codeveloped with Turkey.

A Role for the Midget Submarine

As Pakistan continues to lay emphasis on a sea denial strategy there is a possibility that it may use the midget submarine in an offensive role during any conflict with India in the coming months and years.

The seaward defense of Karachi has been one of the major challenges for the Pakistan Navy since the 1971 war with India. The midget submarine would fill a gap in protecting Karachi Port from sea-based attack. Most importantly, it would replace the current MG110s in service with the SSG (Navy) for operations such as frogmen operations, laying mines, and so on.

Also, with the Agosta 90B submarines undergoing midlife upgrades and modernization, scheduled to join the Pakistan Navy in 2020, and first four Hangor submarines stated to be delivered in 2023, the Pakistan Navy would find a significant increase in its ability to execute an anti-access and area-denial (A2/AD) posture in the Indian Ocean. Along with that, the new midget submarine would upgrade Pakistan’s underwater warfare capabilities in a significant way.

In short, the changeover in the Pakistan submarine force could pose a real security threat to India in the Arabian Sea. Given India’s preparedness to develop a credible anti-submarine warfare (ASW) capability, Pakistan’s new midget submarine can challenge India’s maritime operations in the Arabian Sea.

Besides, Pakistan might use the new midget submarine to expand its clandestine operations off the western Coast of India, particularly around Gujarat’s Sir Creek area and Mumbai.

Hence, it’s essential that India strengthen its subsurface detection and track capability to thwart any Pakistan anti-access capability in the Arabian Sea and to protect India’s maritime security interests in the region.

Prakash Panneerselvam, Ph.D, is an Assistant Professor at the National Institute of Advanced Studies (NIAS) in Benagluru, India.

Is the Chinese JH-7 an Answer to the Pakistan Air Force’s Deep Strike Needs?

Despite its potent display of combat capability during the Balakot standoff, the PAF requires additional platforms to balance against a much larger Indian Air Force.

China held a keel-laying ceremony last month at a shipyard in Shanghai for the second of four Type 054A-class frigates on order for the Pakistan Navy.

A Chinese shipbuilding company cut steel for the third and fourth Type 054A frigates on order for the Pakistan Navy.

The submarines will be modernized over the next three years.