It is a bright summer morning in Srinagar on the second day of the Muslim festival of Eid al-Fitr, which marks the close of the month of Ramadan. While Muslims across the world celebrated, amid lockdowns enforced to contain the coronavirus pandemic, heavily armed Indian forces manned checkpoints in Srinagar, Indian-administered Kashmir’s capital city, to prevent Kashmiris from coming out on the roads.

In downtown Srinagar’s Kanimazar locality, residents wearing face masks had gathered at shop fronts to discuss the calamity that had befallen them just days before the Eid. On May 19, Indian forces had tracked down two local rebels in the densely populated neighborhood. In an ensuing 10 hour-long gunfight, at least 19 houses were damaged and two rebels killed.

When rebels are tracked down, Indian forces routinely blast residential properties — where rebels are suspected of hiding — to hasten the gunfights. Alongside the use of unbridled firepower to kill the holed up rebels, few in number, the destruction of homes is a certainty that Kashmiris have come to terms with.

The site of the latest firefight is marked by charred houses, some still standing with others razed to the ground. It seems as if the locality was bombarded with airstrikes in a war-ravaged country. In addition to soot-covered walls, broken glass is strewn across the entire neighborhood; metal utensils lie surrounded by coal scattered all over the streets.

Inside one of these houses 50-year-old Rafiqa Jan, sat on the floor of her half-burnt kitchen. She is accompanied by her 42-year-old neighbor Tasleema Jan, who also lost her house just five days before Eid al-Fitr. “It took me 40 years to build this house, and it took the Indian forces less than 40 seconds to destroy it,” Rafiqa said.

“Two of our houses are completely damaged now. My son’s family lived in the other house; it had storage for medicines also as he is a medical practitioner. It is all gone now.” 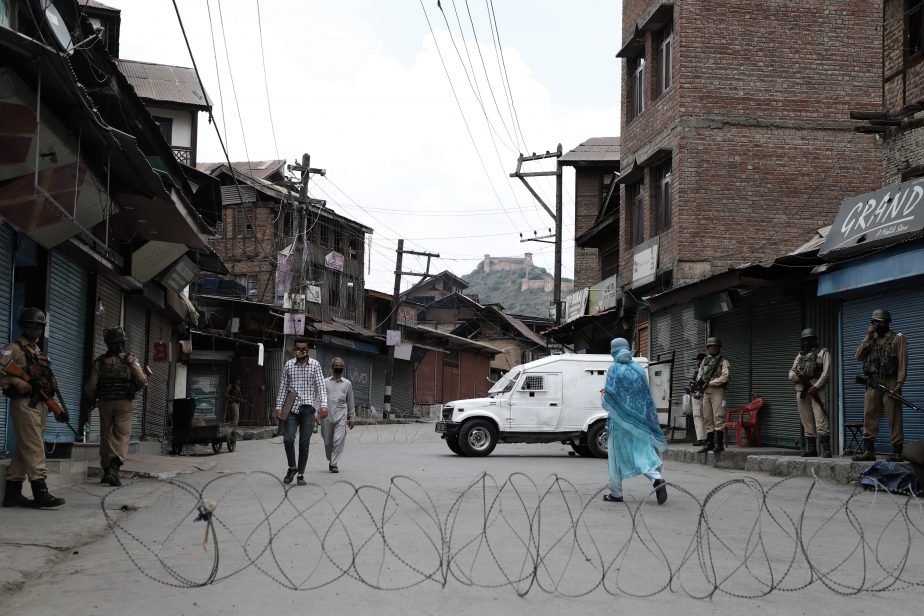 Indian forces checkpoint in Srinagar on the eve of Eid al-Fitr. By Bhat Burhan for The Diplomat.

Recalling the day of the gunfight, she said that forces personnel evacuated her family at 6 a.m. “We were placed in one room and at 7 a.m. everything was in flames. We were not allowed to take with us even a diaper for my grandchild [an infant],” she alleged. “We have been rendered homeless now.”

Rafiqa and five other family members now live at her brother’s place, a few kilometers from Kanimazar. Homeless in the midst of the pandemic, she says, following social distancing guidelines is impossible living at her brother place. “They have a big family there,” she said. “How can social distancing be maintained? He has seven family members. Despite that, my brother is very supportive of us,” she said.

Tasleema added: “My house was fully damaged, now I along with my family members also live at my brother’s house.”

Tasleema said she was ashamed of having to live there. “We were living in our houses and trying to save ourselves from the virus,” she said. “How can one now take precautions in somebody else’s house? Weren’t we suggested to stay at home? How can we do that now?  We are beggars now, who will listen to us?”

Tasleema said she was now planning to clean the corridor of her house, which is still standing, and live in it in the meanwhile. “The other parts of the house are inhabitable,” both said.

Indian forces did not take into consideration the density and proximity of houses to each other in the locality, alleged Tasleema. “We were evacuated at 9 a.m. by Indian forces and after that in five minutes everything had turned into rubble. Even my daughter’s jewelry was destroyed in it,” she said. “They should have taken into consideration that this is a crammed area and not done such huge damage, because it is a densely populated area and the houses are close to each other. But they did not listen, they did not even allow us to take a single pill of medicine with us; the damage done was deliberate, the losses are humongous.”

Rafiqa recalled that following the gunfight the families had returned to their houses to assess losses. “I was traversing the area barefooted trying to find out if anything had been spared by the ammunition,” she said, pointing out her new shoes that she said were bought by her brother when he saw her walking over the rubble. “It turned out not even the cups were left.”

The pandemic was now the least of their concerns. “There are children at our brother’s houses. We are concerned that our sisters-in-law might be worried with us moving into their houses, which is quite genuine at this time, but we are left with no choice but to bear it,” said Tasleema. “The fact remains that precautions that could have been followed in our homes can’t be followed in the houses of others.”

According to the South Asian Terrorism Portal, through May 18, 10 civilians, 26 Indian forces personnel, and 80 rebels have been killed in Jammu and Kashmir. Meanwhile, setting the region on the edge, coronavirus has killed 23 people in the erstwhile state, where over 1,660 positive cases had been reported through May 26. 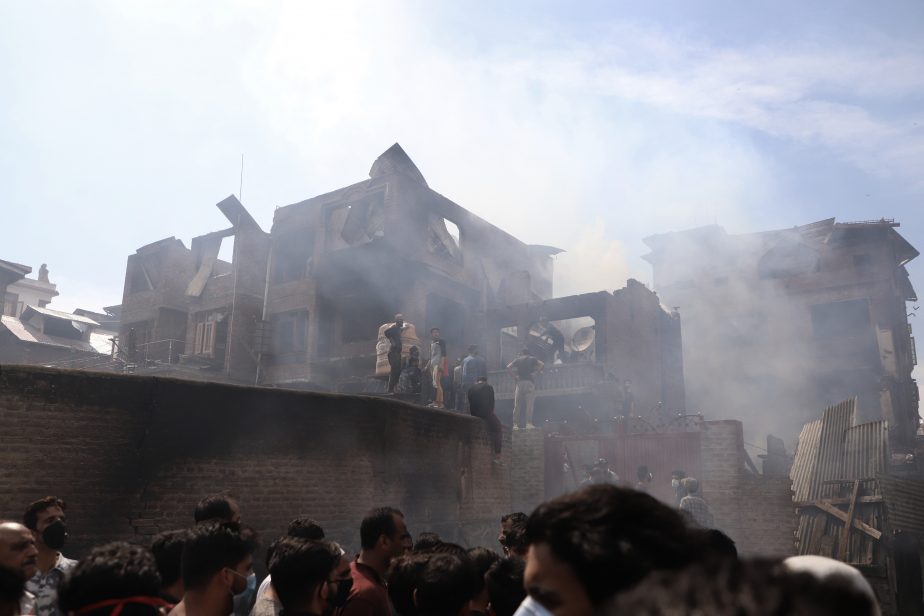 Amid the COVID-19 lockdown, Kashmiris gather near the site of the Nawakadal gunfight. By Bhat Burhan for The Diplomat.

Just a few paces away from the neighbors lives 40-year-old Mubeena Jan. Her house was fully damaged, barring one room. “My husband sells clothes in a flea market on Sundays; he has been idle since the lockdown. He used his blood to build this house, now everything here is burnt,” she said.

Narrating the night of gunfight, she said, “It was 1 a.m. in the night and I woke up to to the noise of some people running outside. They were talking on phone and saying that it was the location. I thought to myself that it must be the health officials and that they had found a positive case in the locality,” recalled Mubeena as she stood on the debris of her burnt belongings in one of her rooms.

She said that then there was a knock on the door. “They [Indian forces] asked me to switch off the light of the bathroom,” she said the knocks were repeated shortly. “They then asked me to open the door without being worried. I have two daughters and the first thing I did was to wake them up. I had no idea of what was happening till they asked me whether there would be an attack.”

Mubeena said she was under the impression that health workers escorted by Indian forces personnel had come to survey the neighborhood for cases of COVID-19 in the locality. “They went upstairs where my son was sleeping and asked different questions,” she said. “We were confined in one room till morning, until we were evacuated. Six families were confined in one house. Tossing away all the guidelines of coronavirus. Could social distancing be maintained in that house?”

The stories in the locality are haunting and painful. One such story is of 42-year-old health educator Shaheena Jan, who now has to live in her brother-in-law’s house. “Ours was a fully five story house with 21 rooms. Now it has turned into a ghost house,” she said. “Nor am I now wearing a mask, neither am I able to follow any guidelines. We have forgotten that there is virus now, we have been engulfed by a bigger virus now.”

Srinagar-based activist Khurram Parvez said that the destruction of properties by Indian soldiers was “a very common phenomenon” in Jammu and Kashmir from the last 30 years. “Instead of trying to arrest them [militants], the focus of Indian soldiers is to kill them at any cost, as there is a monetary incentive for soldiers for killing militants,” he alleged.

Parvez said that soldiers as such “choose to bomb the houses” without waiting for the militants to exhaust the limited ammunition. “When the army suffers casualties they destroy several other adjacent houses too,” he alleged.

“There have been some occasions when an entire village or a locality was burnt down and many people massacred, like Sopore, Handwara, Haigam, Kawdara etc.”

Bhat Burhan is a Multimedia Journalist who works with The Kashmir Walla and his work has been published in various international publications including The Guardian, The Christian Science Monitor, The South China Morning Post, Al Jazeera English, AJ+, The New Arab and others.

Saqib Mugloo is Journalist who works with The Kashmir Walla and his work has been published in Al Jazeera English, The New Arab, AFP, The Wire, The Firstpost and others.

India has witnessed a drop in living standards across all income tiers, significantly denting its efforts to catch up to China.