There are 48 ticket gates at Angkor Wat, and the lady in charge says each one is capable of photographing and processing about 500 foreign visitors a day at one of the world’s top tourist attractions. Khmers don’t need passes.

But these days foreign visitors are rare as global lockdowns and quarantines – prompted by the COVID-19 pandemic – limit visits to the hardy few who opted to remain in Cambodia as the pandemic took hold.

In a way, it’s a blessing for the Cambodians who cherish the 8th to 12th century temples and ruins at Angkor Wat and the site’s history, the foundation of Khmer society and a key reference point for survival during a bleak and bloody 30-year civil war.

The lady at the gate was charming. About 25 foreigners, mainly expats from Phnom Penh, passed through that day. With them were a few hundred locals who relished the empty complex, a constant reminder that Cambodia was once advanced, a superpower.

As the lockdown in Cambodia ended there were no conga lines of buses, legions of Chinese with colored flags, Westerners in loud T-shirts and cargo pants, or lengthy queues that in recent years have turned a sacred site better suited to field trips into a fun park for the great unwashed from abroad.

Instead it was the Cambodians who rode push bikes and whose children played in sand pits; some prayed at thousand year-old Buddhist shrines, others fished in the moats, hiked over great walls, and strolled through tropical forests, which had once threatened to devour a work started by Suryavarman II. 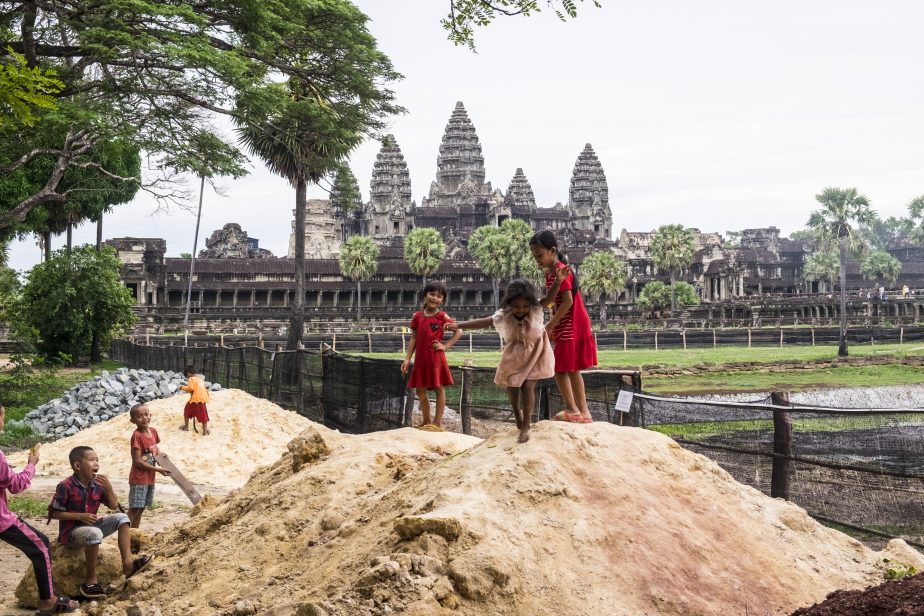 Children play in the sand around a deserted Angkor Wat. Photo by Luke Hunt

It’s a throwback to 20 years ago when fast motorbikes were the preferred means of travel, but Angkor – then as now – was serenely quiet.

Back then, the Khmer Rouge was melting into the background, bandits were common and the theft of historical artifacts had emerged as an industry for auction houses in the West.

These were also issues the government had to deal with before opening Angkor Wat for mass tourism. The Khmer Rouge, bandits, and international thieves have gone and last year more than 2.5 million tourists paid $116 million to get through the gates.

Sreynath Sarum, who works in hospitality in Phnom Penh, said high tourist numbers made it difficult to be a local on home soil. “We usually have a lot of people out there and when we go there you feel like you’re just another visitor.”

The big bucks and crowds have disappeared since the pandemic took hold five months ago. Local businesses are hurting badly and authorities say this is unlikely to change over the short term and will last until quarantines are lifted and international airlines are back on track.

In the meantime, getting into Cambodia remains tricky. A new type of visa, COVID-19 tests, medical certificates, and health insurance are mandated. If anyone from a flight displays any COVID-19 symptoms, a two week quarantine could follow for all on board.

It’s a harsh reality, but at Angkor Wat the solitude is refreshing. As the lady at the gate says “if you don’t like crowds and you can get here, now is the time.”

Or as David Potter, a British advertising executive who was among the handful of foreigners to get through the gate, said: “It’s just awesome to be able to explore one of the great wonders, devoid of the tourist hoards and not a single selfie stick in sight.”

China Isn’t the Only Reason for Cambodia’s Vaccination Success

More than good relations with China, Cambodia’s vaccination success comes down to effective and responsive government actions in a moment of crisis.

Cambodia – With a Little Help – Charts Its Own COVID Course

Flights from Indonesia and Malaysia were cancelled as confirmed cases from abroad spiked.

Ready or Not, Cambodia Plots its ‘New Normal’

Official caseloads are plummeting after the government scaled back rapid COVID-19 testing.

Cambodia and Its ‘Dictator’ Struggle With the Pandemic

The WHO issues “dire warning” ahead of Khmer New Year.