On Tuesday afternoon, June 9, a small crowd began to gather opposite the United States Embassy in Colombo, Sri Lanka. Holding placards bearing slogans like “Racism is a deadly virus,” the protestors donned face masks as per the latest health guidelines issued by the government.

They were members of the Front-Line Socialist Party (FSP), a breakaway political faction of the more popular Janatha Vimukthi Peramuna, responsible for a failed leftist movement and two insurrections in the island’s conflict-ridden history. Despite COVID-19 regulations against mass gatherings, the protesters gathered at the capital’s Liberty Circus to protest against the murder of George Floyd, an unarmed black man killed by police in the United States. 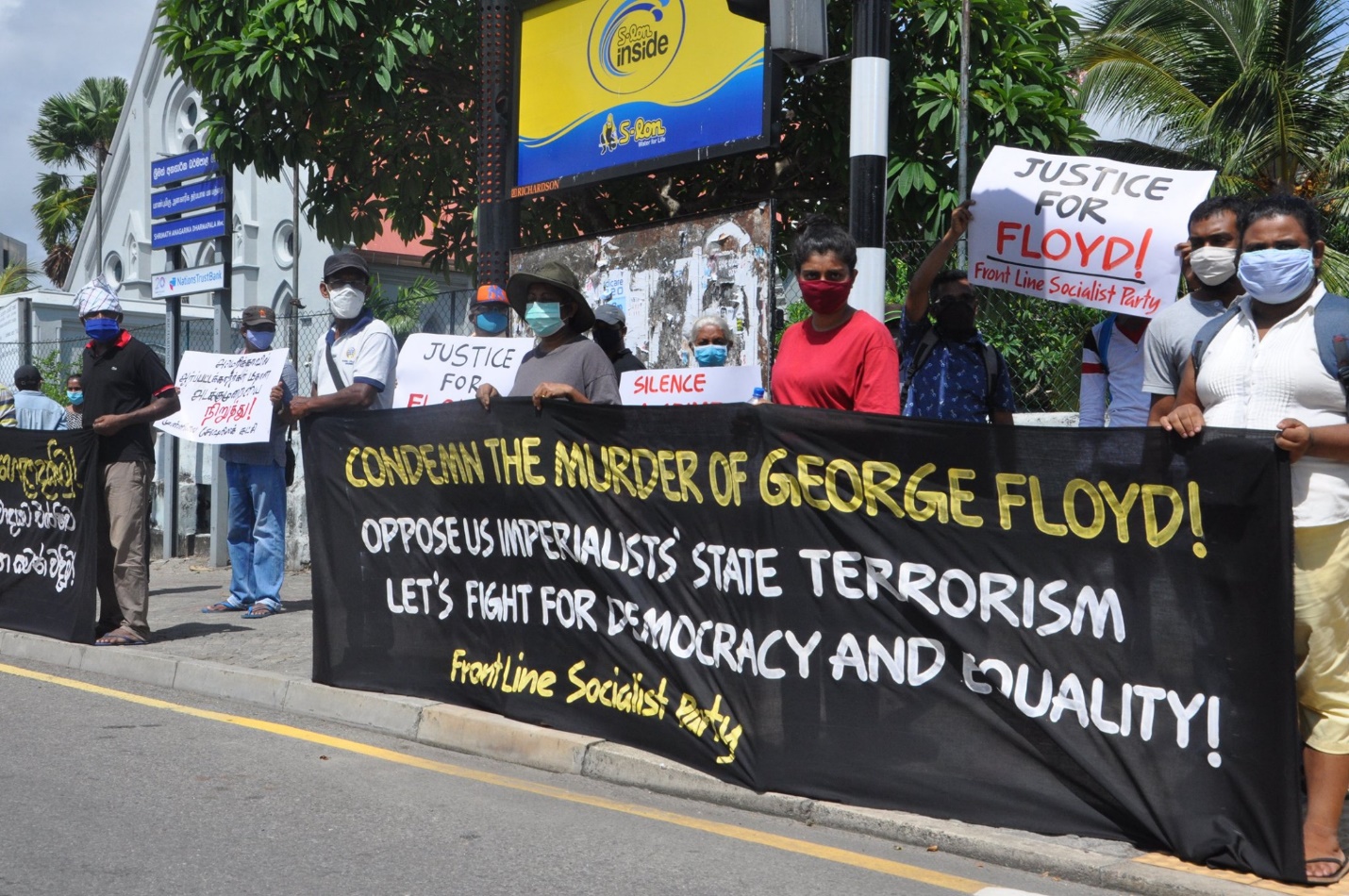 Pubudu Jayagoda, Politburo member of the FSP, said that leftist and progressive communities around the world were gathering against racism and police brutality in the United States. “The Front-Line Socialist Party had called for a similar protest today in Colombo, in solidarity with the protesters in the U.S.,” Jayagoda said. “However, before the protest even began, our members were attacked and arrested by the police.” 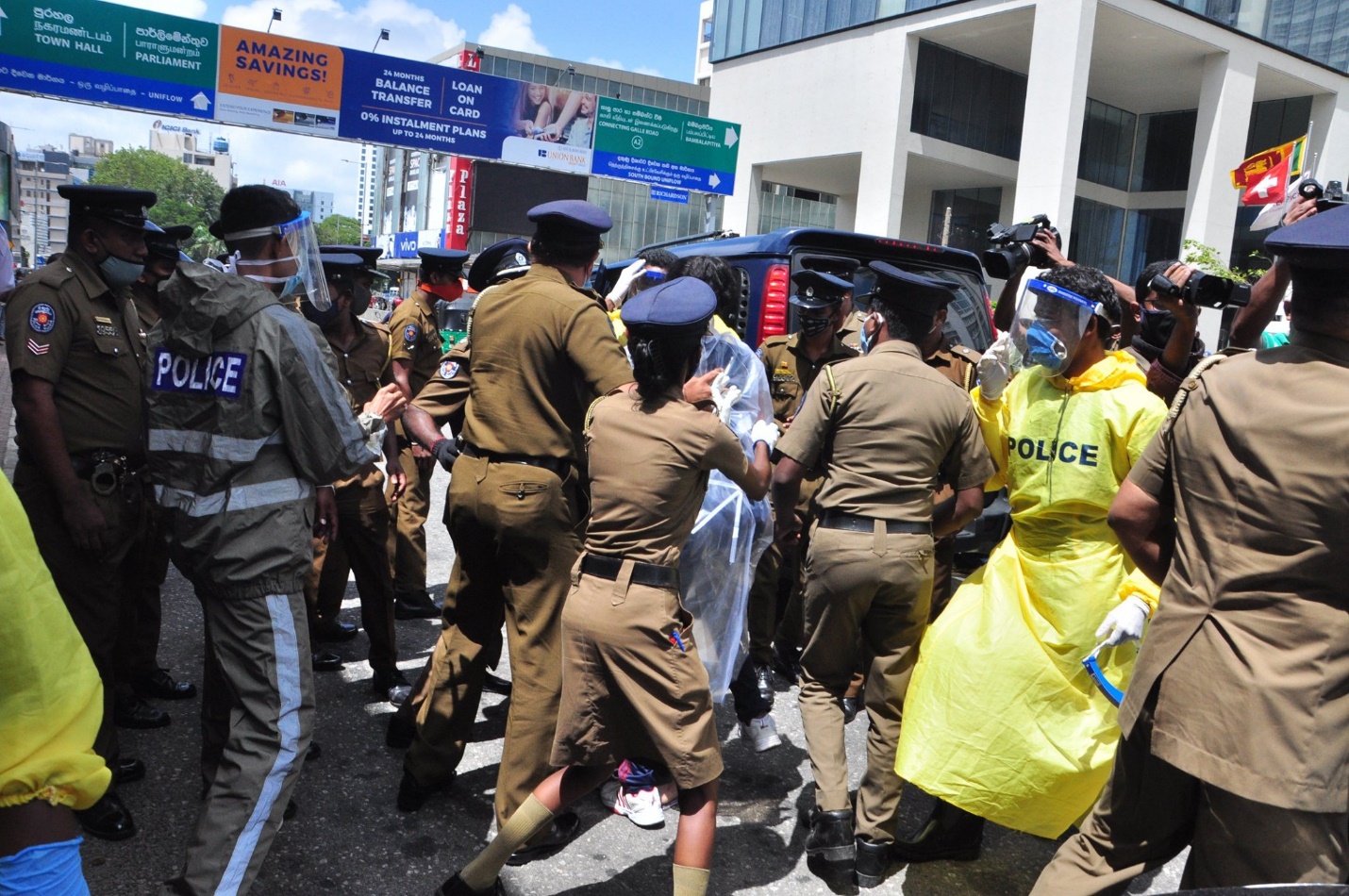 The police crackdown on peaceful protestors soon attracted ire of the public as footage of protestors being manhandled by the police emerged on social media. One video even showed a young woman being tossed into a police vehicle, head first.

“This protest was publicized well before; it’s not something that we organized in secret. But the Kollupitiya Police Officer-in-Charge had sought a court order restricting the protest citing public health concerns,” Jayagoda said.

With the easing of an 85-day-lockdown in Sri Lanka, the country returned to somewhat normal operations this past week, albeit with strict guidelines against gatherings of more than 100 persons. 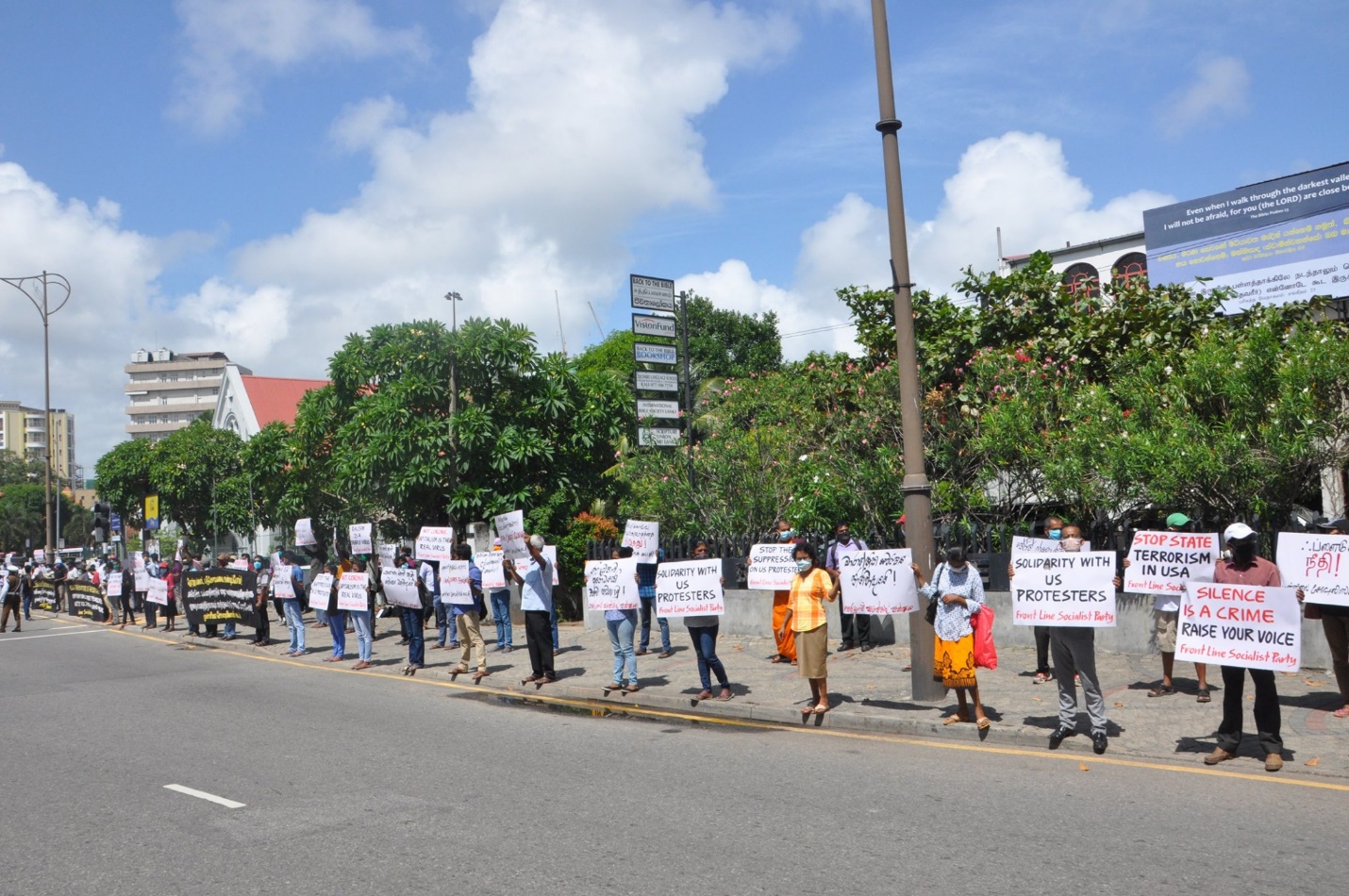 According to Jayagoda, the FSP “organized the protest in line with the government health guidelines. Our protestors stood one meter apart, wore face masks, and sanitized themselves.” He added, “It is the government which has been downplaying coronavirus health risks.” He was referring to statements made by various members of the government, including the country’s health minister who assured that coronavirus was no hindrance to holding an imminent national election, even in the midst of a pandemic. Despite a raging virus taking hold of the island, President Gotabaya Rajapaksa on March 2 called a fresh parliamentary election, six months ahead of schedule.

The FSP group also held a similar protest opposite the Foreign Employment Bureau demanding repatriation for stranded Sri Lankan migrant workers, an integral component of the country’s economy. Jayagoda questioned why that protest was not a concern for public health. “Across Europe, and even in countries with rigid laws such as South Korea or Singapore, people are protesting in unity with the Black Lives Matter movement. This is what we attempted to do. But it appears that Gotabaya Rajapaksa is attempting to tell Donald Trump that his government won’t allow any uprising of this nature to take hold in Sri Lanka.” Jayagoda alleged that this was “because most of these leaders have been residing in the U.S. and wish to return there one day,” he alleged.

The issue of President Rajapaksa’s U.S. citizenship came under scrutiny in the months leading to the presidential election in November 2019, as the Sri Lankan Constitution does not allow dual citizens or non-citizens to hold public office. However, Rajapaksa’s name has appeared in the latest Quarterly Publication of the United States Federal Register of Individuals Who Have Chosen to Expatriate, indicating he has renounced his U.S. citizenship.

Meanwhile the U.S. Embassy in Sri Lanka said that it did not request the demonstration opposite the embassy to be blocked, adding that the protest has been denied by the police due to COVID-19 restrictions in Sri Lanka. U.S. Ambassador Alaina Teplitz tweeted, “Rights to peaceful assembly and free speech are cornerstones of the Universal Declaration of Human Rights – rights the US supports even when difficult for us. Today’s proposed demonstration in front of our Embassy was denied by Sri Lankan Police due to COVID-19 restrictions on gatherings.”

The Embassy, in a statement, said that the United States supports the rights of Sri Lankans and all people to peacefully protest, which is consistent with their shared democratic traditions. “We are aware that Colombo Fort Magistrate’s Court issued an order blocking a demonstration near the U.S. Embassy scheduled for today. As always, we appreciate the efforts undertaken by the Government of Sri Lanka and local law enforcement to keep diplomatic personnel and facilities in the country safe and their continued efforts to curb the spread of COVID-19 by requiring masks, limiting the size of public gatherings and other measures,” it said.

The arrests at the protest came days after President Rajapaksa issued an extraordinary gazette appointing a Presidential Task Force whose primary functions would be to “Build a Secure Country, Disciplined, Virtuous and Lawful Society.” The gazette, although vague in language, recognized that national security was a key factor in determining the country’s future, while indicating that drug eradication will be a key focus of the task force. The gazette also allows for several government entities headed by military associates to act on their discretion in matters deemed to endanger rule of law in the country. 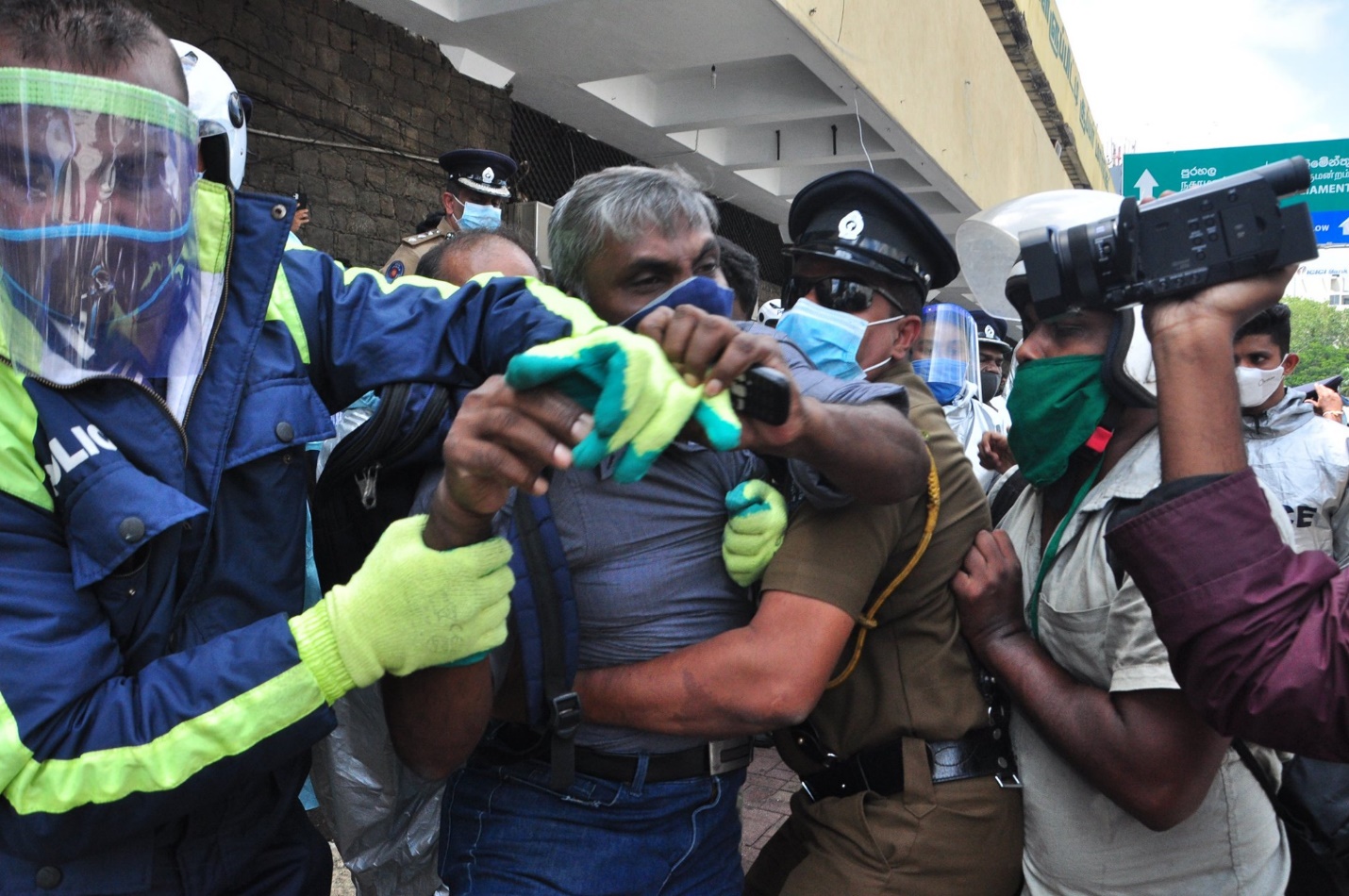 At least 53 individuals were arrested by the police in Colombo on Tuesday on charges of taking part in a protest and violating coronavirus regulations. However, law enforcement chose to look the other way, just a week before, when hundreds of mourners gathered in the hill country to pay their respects to the remains of an acclaimed minority union leader, late Minister Arumugam Thondaman. Politicians, including Prime Minister Mahinda Rajapaksa, were seen defying social-distancing practices when the late leader’s body was brought to the Parliament, including by embracing the former minister’s son.

Health authorities feared a second wave as crowds defied a district-wide coronavirus curfew and social distancing rules to attend the funeral in the last week of May. The director-general of Health Services, Dr. Anil Jasinghe, was meanwhile threatened via telephone, by a supporter of the late minister for making statements against the organizing of crowds at the funeral. While Thondaman’s body was placed in several locations for the public to pay respect, Sri Lanka’s active social media population was quick to point out that social-distancing rules and coronavirus regulations only apply to the general public and not powerful political figures.

According to Police these people were in violation of the quarantine laws. What about the American officer who skipped quarantine regulations when they entered the country? Because these had diplomatic previlagea? What about everyone who attended Arumugam Thondaman’s funeral? https://t.co/dIalaWaWZX

Kalani Kumarasinghe is a print journalist based in Colombo, Sri Lanka. She is also Sri Lanka’s 2019 fellow for the Asian Journalism Fellowship hosted by the Institute of Policy Studies, National University of Singapore.

By Krishan Francis and Krutika Pathi

Gotabaya Rajapaksa Is Finally Resigning. What’s Next for Sri Lanka?

The country needs a credible government that enjoys legitimacy in the eyes of the people. Forming one will be a herculean task.

One member of the Sri Lankan diaspora reflects on the agony of watching his motherland lurch from crisis to crisis.