In the past week, fighting between Chinese and Indian soldiers on disputed western Himalayan borders left 20 Indian soldiers dead, 20 seriously injured, and an unknown number of Chinese casualties. The conflict was triggered by roads built near the border, and possibly dams. These projects all further stress the fragile and globally crucial high-altitude environment.

Most of the commentary over the disputes has focused on China’s growing foreign policy assertiveness, and the long-standing nature of the dispute. But the clash should also call into question the necessity of territorializing these fragile and isolated environments.

The clash on the night of June 15-16 marked the first time that soldiers have died in combat between China and India in the past 40 years. But these are not the only soldiers or their support staff to die in this region during that time. China, India and Pakistan have been arguing over the western Himalaya region for over 70 years. During this time, thousands of soldiers have died, and significant damage has been done to the fragile environment, including the glaciers that sit at the headwaters of the Indus, Brahmaputra and Tarim River Basins.

To end the conflict, nonterritorial approaches, which can manage the environment and better serve Indigenous peoples, are necessary.

In their territorial counterclaims, China and India accuse each other of encroaching on land or enacting “colonial-era borders.” But historical sources suggest that the idea of a lineal border, drawn from peak-to-peak through high-altitude regions, was itself a colonial invention.

The Tibetans, Ladakhis, Balti, and Gilgit people, who have the longest relationship to these lands, did not approach borders this way. Treaties between these peoples, like the Treaty of Tingmosgang between the Tibetans and Ladakhis in the 17th century, defined boundaries at mountain passes, where trade could be conducted, and the movement of armies could be thwarted. Only nomads travelled up into the high-altitude desert valleys, and then only in summer. The peoples of the region still transmit cultural memories of the dangers of high-altitude valleys and the environmental consequences of despoiling their water sources. 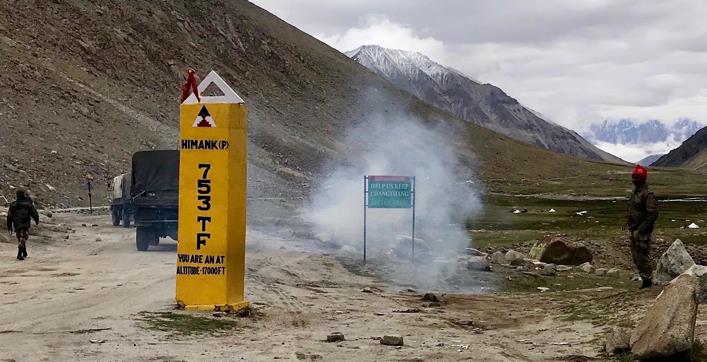 British imperial cartographers began drawing maps of the region in the 19th century when they sought to define the boundary between the Princely State of Jammu and Kashmir and Tibet. This polity was created through treaties with the Dogra Dynasty, who were based in Jammu, but had taken control of the high-altitude regions of Ladakh, Baltistan, and Gilgit during the 19th century. Tibet had been a protectorate of the Qing Empire since the early 18th century, but by this point, they had a high level of autonomy.

The British wanted a map that would delineate their sphere of influence from the Qing sphere of influence, as they viewed this as their most vulnerable border. The terrain proved difficult, and their maps were imprecise. When they tried to engage locals in the process, they were met with skepticism and resistance. Rather than listening to this local knowledge, they pressed ahead with their colonial reformulation of the region.

Neither the British (through the Dogra), the Qing, nor their successors the Republican Chinese state territorialized this high-altitude region in between Ladakh, western Tibet, and southern Xinjiang; they began making cartographical claims on the area but were not physically present.

Territorialization of high altitudes only began when the new Chinese, Indian, and Pakistani states pressed claims they inherited from their predecessor empires. Over the past 70 years, their pursuit has cost lives, harmed the environment, and cut off regional trade, pilgrimage, and nomadic routes.

It has also proved somewhat of an impossible task. Where 19th-century cartographers struggled without the technology to map high valleys, contemporary scientific knowledge presents another issue for border makers: their science recognizes how often this seismically active and ice-carved region transforms. Borders marked by lakes, ice, and rivers move with the seasons, and the ground itself houses what Indian government engineers once called “geological surprises.”

Geological surprises not only undermine military attempts to establish lasting infrastructure, but they also move borders.

Lack of acknowledgement of both the region’s fraught environment and its borderless history may underpin these ongoing tensions, but recognition of both could suggest a way forward. If the highest peaks were de-territorialized, it would avoid much senseless loss of life, environmental destruction, and allow social and cultural exchange for the region’s local communities.

Steps like this have been suggested before, such as the creation of a Peace Park on Siachen Glacier. Other frozen regions around the world are governed through councils and treaties rather than militaries. One, the Arctic Council, includes a voice for Indigenous peoples.

Rather than reverting to circulatory nationalist and territorial claims, an engagement with science and history must call into question the sense of bordering this region in the first place.

Ruth Gamble is a Lecturer in History at La Trobe University. She is an environmental and cultural historian of Tibet and the Himalaya. She is the author of Reincarnation in Tibetan Buddhism; the Third Karmapa and the Invention of a Tradition (Oxford University Press, New York, 2018) traces the links between Tibet’s reincarnation lineages and its sacred geography.

Alexander E. Davis is a lecturer in International Relations at The University of Western Australia. He is the author of the research monograph India and the Anglosphere: Race, Identity and Hierarchy in International Relations. He is also lead author of a forthcoming disciplinary history of IR in the white settler colonies and India, with Vineet Thakur and Peter Vale (Pluto Press, 2020).

Rajnath Singh’s statement before the Indian Parliament stood out for its blunt tone.

China Attempts to Shift Its Boundary With India in Ladakh – Again

The latest round in the ongoing crisis in eastern Ladakh bodes ill for a diplomatic resolution.

As the ten-month long standoff in Ladakh inches toward resolution, both sides are eager to score domestic points.

Rajnath Singh’s speech at the upper house of the Indian parliament described a plan to create a buffer zone in the north bank of Pangong Lake.

The Problem With Australia’s Conservatism

Australia may find itself sleeping walking into an international environment that it doesn't have the disposition to effectively negotiate.