A growing awareness of the links between wildlife trafficking and SARS, COVID-19, and other infectious diseases has prompted the Vietnamese prime minister to issue an executive order to clamp down on this vast smuggling trade in endangered species.

During recent months, conservation NGOs and Hanoi’s Ministry of Health have alerted the government to the increasing danger of new zoonotic diseases being triggered by the nation’s wildlife trade.

Most scientists have concluded that the COVID-19 pandemic, which began in southern China, started in bats. The intermediate host that transmitted the deadly virus to humans may well have been the much-smuggled pangolin, according to one Chinese study. This is still a working hypothesis, however.

Vietnamese health experts are closely monitoring these developments. Dr. Le Thi Huong,  director of the Institute of Preventive Medicine and Public Health at Hanoi Medical University, told The Diplomat that “the virus that jumped from bats into humans through an intermediate host, causing the COVID-19 pandemic, has shone a spotlight on how easily zoonotic diseases can emerge from wildlife, exposing a serious gap in the wildlife [protection] regime.”

In spite of Vietnam’s widely acclaimed success in containing the COVID-19 without a single death, NGOs are warning that the country’s huge wildlife trade, estimated to be worth $1 billion, leaves the door wide open to new viruses and pandemics that could emerge from a nexus of trafficking, wet markets, and wildlife farms.

Huong is calling for strong measures to be taken. “We must expand efforts to stop the illegal wildlife trade that poses a health risk, as well as to close wildlife markets when they threaten human and animal health. We have to prevent this kaleidoscope of pathogens from entering the country.”

The executive order signed by Prime Minister Nguyen Xuan Phuc on July 23 is designed to remedy the poor enforcement of existing wildlife trafficking laws. The directive calls on ministries to revise and update laws to “Stop the import of living or dead wild animals, eggs, larvae, parts and derivatives of wild animals and resolutely eliminate markets and places linked to illegal wildlife trading.”

This far-reaching directive seeks to enlist national security agencies to investigate and stop transnational wildlife syndicates that use Vietnam as a transit hub to traffic wildlife and animal parts, including rhino horns and ivory from Africa, to their final destination in China. The directive orders ministries to revise old legislation but does not replace existing laws.

However, some doubts have arisen over how far the government will go to outlaw the trade based on the statement by Ha Cong Tuan, the deputy minister of Agriculture and officer in charge of drafting the executive order.

Ha Cong Tuan cautioned that while “the government recognized the viewpoint of those [who want] an absolute ban on all trade in wildlife species, we should be very careful.” He added that “many wild species have been successfully raised” in farms, potentially blurring the line between the licit and illicit activities.

Thousands of wildlife farms conduct a lucrative business in southern Vietnam, supplying consumers and wild meat restaurants with no regard to the spread of infectious diseases. Many of these operations enjoy quasi-legal status.

Hanoi-based wildlife NGO Pan Nature sent a letter signed by 14 other environmental NGOs in February to Prime Minister Nguyen Xuan Phuc calling on authorities “to close markets and other locations where illegal wildlife is on sale.”

Trinh Le Nguyen, the director of Pan Nature, expressed his concerns about the executive order released on July 23: “I think there it should be much stronger and with stricter regulations on wildlife farming. Several conservation agencies are working on further recommendations.”

A landmark scientific study based in Vietnam found that “Coronaviruses were detected in the majority of wildlife farms,” 17 of the 28 studied in the paper. The joint team of international and local experts identified six known coronaviruses in bats and rodents. The study concluded, “Livestock and people living in close contact with rodents, bats, and birds shedding coronaviruses provides opportunities for intra- and inter-species transmission and potential recombination of coronaviruses.”

Another study matched 142 viruses known to have been transmitted from animals to humans over many years to IUCN’s Red List of threatened species. The authors found that “threatened species with a population size reduction owing to exploitation … have over twice as many zoonotic viruses as compared to threatened species listed for other reasons.” The authors added, “Exploitation of wildlife through hunting and the wild animal trade have been hypothesized as increasing opportunities for pathogen spillover because of the close contact between wildlife and humans involved in these activities.”

While many coronaviruses never develop or mutate into a deadly strain like COVID-19, the fact that these viruses are widely circulating in wildlife farms is a clear warning to public health authorities about the potential for future pandemics. 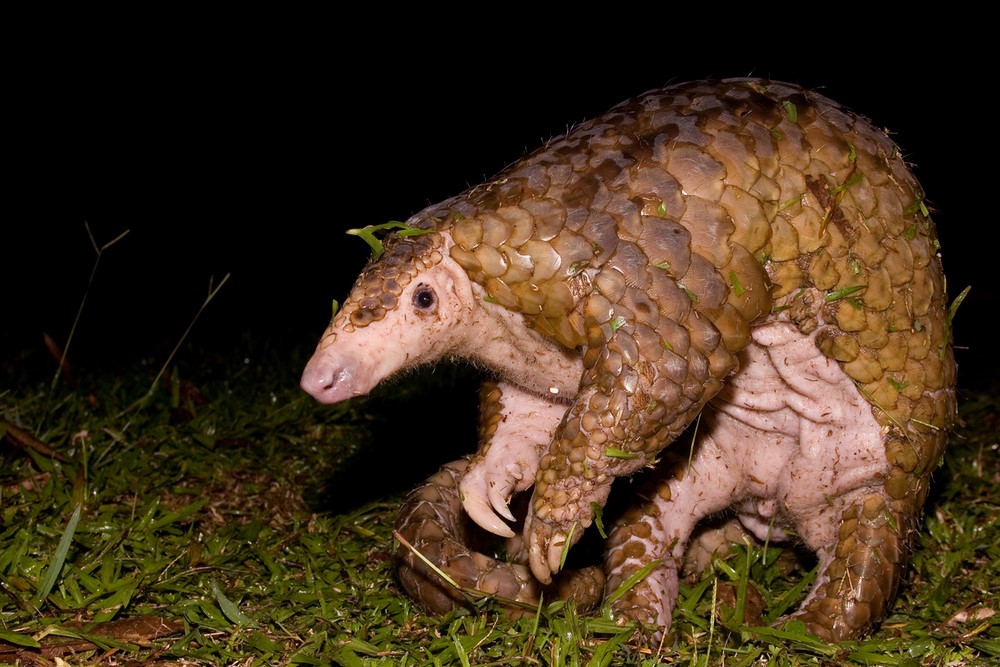 A large Malayan Pangolin (Manis Javanica) smelling the air searching for signs of danger in the state of Perak , Peninsular Malaysia. Photo by WWF Malaysia/ Stephen Hogg. One theory holds that the pangolin may have served as the intermediary host for the coronavirus that causes COVID-19.

But it is not only Vietnam that has to improve its laws and its law enforcement but the whole region. K. Yoganand, regional lead for wildlife and wildlife crime at WWF Greater Mekong, explained the major flaw in nearly all wildlife legislation: “Wildlife trade laws in most countries do not factor in infectious disease risks. This is a major gap in policy.”

He recommends that “To minimize viral epidemic risks, all commercial trade in wild animals and birds needs to be suspended by governments, to be followed by a scientific assessment of which groups of wild animals are at high risk of carrying viruses that can be transmitted to people.”

What worries UN Environmental Program (UNEP) experts is that most of the world’s coverage on COVID-19 has been focused on the treatment of the patients, the economic fallout, and the frantic search for a vaccine. Much less publicity is given to what has brought about this dramatic spike in viral epidemics – SARS, MERS, and now COVID-19 – and the environmental roots of the problem.

The destruction of forests and other natural habitats, along with wildlife trafficking, will lead to a stream of animal diseases jumping to humans, unless we do more to tackle the environmental causes of COVID-19, UNEP warned in a new report.

Even before COVID-19, 2 million people died from zoonotic diseases every year, mostly in poorer countries. These experts say the latest lethal outbreak was highly predictable.

“It was predicted that this was going to happen and it’s going to happen again until we learn the lessons,” warns Dr Jane Goodall the famous British primatologist. She says that nature is sending us a message: “Our disrespect of the animals we should share the planet with, that has caused this pandemic.”

Preventive health expert Dr. Huong agrees. “there is a clear need to take a ‘One Health’ approach to wildlife trade.” In Hanoi, the Ministry of Health cooperates with Hanoi Medical University in training human resources to develop the “One Health network” adopting the policy that biodiversity, respect for wildlife, and human health are all inextricably linked.

To avert the next wildlife-related pandemic, Huong hopes that Vietnam’s new government directive will bring “many more prosecutions, including online traders, and ideally put pressure on thousands of farms with known links to illegal wildlife trading.”

The prime minister’s directive looks set to bring about tougher legislation and stronger law enforcement to deal the international dimension of wildlife trafficking. But pressures from some of Vietnam’s powerful interest groups to protect domestic wildlife farms could still frustrate efforts in what could potentially be a historic breakthrough in the region.

Vietnam had a plan for ending bear bile farming. What went wrong?

Did Vietnam Just Doom the Mekong?

A policy reversal on Mekong dams has put Hanoi’s credibility – and the river’s fate – on the line.

The latest twist in Temirov’s tale saw the Kyrgyz citizen-by-birth deported as a “foreigner.”

Kim continues to double down on the importance of the nuclear program for his country.