Liyaqat Layeeq started to cough one Saturday morning in late June after several days of living with a mild fever. As a healthy young person, Layeeq did not expect to struggle, experiencing breathing difficulties, sore throat, high fever, and severe body aches. With little chance of receiving any help from Afghan hospitals, his only hope for survival was his body’s own immune system.

Afghanistan was four months into the pandemic, and the health system was on the edge of collapse. People had broken the quarantine in Afghan cities, including Kabul, without following public health advice such as social distancing and wearing face masks. As people swiftly went back to normal, COVID-19 spread within families and infections skyrocketed.

“I was worried that my body might be weak in the face of COVID-19,” Layeeq, a 26-year-old resident of Kabul, said. “The lack of standard hospital and health services doubled my fear. Almost everyone relied on home-caring, rather than hospitals.”

With catastrophic institutional failure stymieing the national lockdown, Afghanistan defaulted its way into a new strategy for fighting COVID-19: herd immunity. In essence, the government gave up. As things stand, the virus will infect everyone – even if COVID-19 is a death sentence for patients with pre-existing conditions and weak immune systems. As more and more people fell ill and patients died of the virus, the public became numb to the sufferings and deaths caused by the pandemic.

“Unfortunately in Afghanistan and Kabul, the situation went in a way that major [numbers of] fellow citizens got infected by the virus,” Khushhal Nabizada, the director of Kabul Health Directorate, said. “Those who are safe will get infected by COVID-19. We hope people develop herd immunity. Otherwise, we are going to have another tragedy.”

Emerging evidence suggests that recovered COVID-19 patients do develop immunity to the disease, but the antibodies reduce within two to three months. Baz Mohammad Shirzad, a former adviser to the Afghan Health Ministry, said that herd immunity is still a “fantasy and theory.”

With the role of herd immunity still uncertain, public numbness is helping Afghanistan get through the pandemic instead.

The pandemic once frightened Afghans to the point that some, in despair, took to screaming “Allah Akbar” from their rooftops in Kabul and Herat cities. In the face of a crisis that had overwhelmed wealthy nations, Afghans were on their own to battle COVID-19 amid a raging war and widespread poverty. But over the ensuing months, people accepted the pandemic as an unavoidable source of suffering and death.

“There is a public indifference toward the disease,” Layeeq, the patient with symptoms of COVID-19, said. “There is less sympathy and mourning for a COVID-19 death, unless a close family member has fallen victim to the virus. The public does not have the usual sympathy for a COVID-19 victim.”

The pandemic caused unseen rates of infection after a failed attempt to close public places and isolate COVID-19 patients. When COVID-19 spread into Afghanistan in February 2020, the Afghan government seemed ready to devote all possible resources to saving lives from the virus. The government enforced a lockdown in all provinces of the country and set up testing centers.

However, the measures — marred with widespread mismanagement and corruption — failed Afghans in the face of the pandemic. People had to choose between dying of starvation and dying of COVID-19; they made the second choice, as there was still a chance to survive the new virus. President Ashraf Ghani of Afghanistan has said that as many as 90 percent of Afghans live under the poverty line — less than $2 a day.

Within four months, the lockdown was a memory and Afghanistan was back to normal. The virus was free to infect people. But experts believe that most of the Afghans infected by the pandemic were never counted and added to the country’s official total. Afghanistan has tested just 83,000 patients for COVID-19 and 35,000 of them were positive, according to Shirzad, the former adviser for the Health Ministry.

“Many other countries test 83,000 people every day,” Shirzad said. “These positive cases are passive, because patients visited public hospitals. If you ask any family in a city and in a village, there is no family that did not have a COVID-19 patient.”

Instead of official records, social media pages and graveyards witnessed the rise in COVID-19 patients and deaths. Afghan social media pages were filled with death announcements. Asif Asil, an Afghan Facebook user, scrolled by an average of 20 posts a day in which his friends shared symptoms of the novel coronavirus.

Reza, who goes by one name and sells groceries in a western graveyard in Kabul, said that as many as 40 people were buried every day in the graveyard from May through July. He said that before the pandemic, there would usually be around 10 burials a day. “Initially, I did not believe in the existence of COVID-19,” Reza said. But then he saw evidence of the death toll: “People began burying their dead even during nights.”

COVID-19 is believed to be behind the high rate of deaths. For elderly people, people with pre-existing diseases such high blood pressure and diabetes, and people with weak immune systems, COVID-19 can be a death sentence. In Afghanistan, people largely rely on home care and herbal medicines, which have not proven effective in the fight against the virus. Shirzad, the former Health Ministry adviser, noted that the people have “turned their homes into hospitals.” 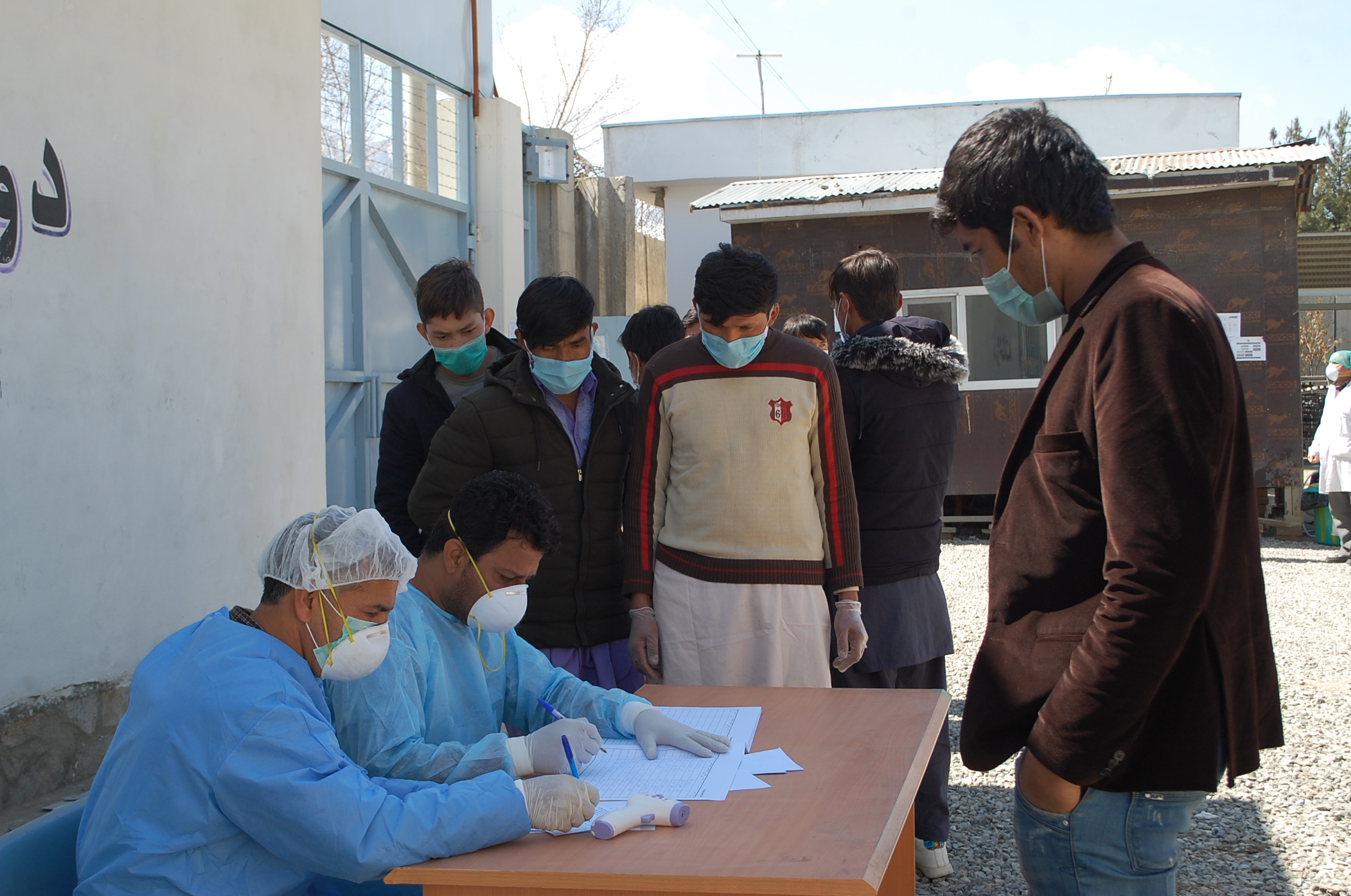 Afghans come to the Afghan-Japan Hospital, in Kabul, the Afghan capital, seeking COVID-19 tests in March 2020. Photo by Ezzatullah Mehrdad.

The relationship between the designated public hospitals for COVID-19 — the Afghan hospitals best equipped for COVID-19 patients — and the public was largely toxic. Unlike other countries, where people have cheered for their doctors and hailed them as heroes, in Afghanistan mistrust was prevalent. Rumors circulated that COVID-19 was not real, but only an excuse for the Afghan government to receive international aid. When COVID-19 began killing people, another rumor spread that doctors were killing patients and selling their bodies.

“For whatever reason, we did not have strategic communication with the public,” Nabizada, the director of the Kabul Health Directorate, said. “Battling rumors consumed the most of our energy and time. There was not enough trust between the public and the government. We need to know how we can convince the public of a danger.”

“We did not have enough professional health care workers to handle ventilators,” Nabizada, the director of Kabul Health Directorate, said. At the time, there were fewer than 500 ventilators for Afghanistan’s population of over 35 million. “We need to review our system and evaluate our capacities for an emergency situation. We almost lost the control of the situation.”

Despite the shortcomings, the health care system did not completely collapse — but neither was it effective at saving people from the pandemic. The reasons Afghanistan’s hospitals held on vary. For one thing, the country did not face skyrocketing cases across the board at the same time, as 70 percent of the population lives in rural areas and 46 percent of the population are under 15. Another reason could be an already used vaccine: the Bacillus Calmette-Guerin (BCG) vaccine, commonly used against tuberculosis.

“One reason that COVID-19 did not lead to a catastrophe was the BCG vaccine,” Shirzad, the former adviser, said. He added that almost every Afghan had received a BCG vaccine that could boost the body’s immune system as high as six times. Scientific research hasn’t proven BCG to be completely effective against COVID-19 and many research projects are under way to study its effeteness. Afghans, however, are pinning their hope that the BCG vaccine will be enough to help the country reach herd immunity after mass infections by the new coronavirus.

According to scientists, herd immunity is achieved when around 70 percent of the population have been infected and developed antibodies to the virus. As there is no data even about the exact population of Afghanistan, it is hard to speculate how many people have been infected and developed immunity to COVID-19. In addition, there is no solid evidence that recovered COVID-19 patients develop immunity for a long enough time for it to matter.

Shirzad said that the virus is inside of Afghanistan and argues people can be infected after losing their immunity to the virus. “There is a difference between natural immunity and vaccine immunity,” he said. “The vaccine immunity last longer.”

Experts and the public alike now fear a new wave of infection. The long-struggling Afghanistan might go through a new surge of COVID-19 cases that could trigger a full-scale crisis — unlike the first wave. “I think it is less likely for second or third wave of infection,” Nabizada, the director of Kabul Health Department, said. “If it comes, we are ready.”

“I am concerned with a new infection,” Layeeq, the young Kabul resident, who survived after two weeks of struggling with the virus. “I am afraid the virus will come every month or three months and hurt us. It can make life harder for us in a country like Afghanistan.”

The long-struggling Afghanistan might go through a new surge of COVID-19 cases that could trigger a full-scale crisis -- unlike the first wave.

Afghan Lives Through the Lens of COVID-19

Illuminating the deep socioeconomic impact of the pandemic on Afghan lives.

The results of the chair election set the future trajectory for the party – and for Taiwan’s democracy.

Report: Putin Suggested US Use Russian Bases in Central Asia

A new Wall Street Journal report suggests that Putin offered Russian bases for the U.S. to use to monitor Afghanistan. It’s not at all clear if the offer was genuine.

The farmers have renewed their protests with calls for a nationwide strike on the anniversary of last year’s controversial legislation's passage.

No One to Speak for Afghanistan at UN General Debate

Who sits at the high table of international politics when the political arena back home is embroiled in unrest or irregular transition?