Data from S&P Global Market Intelligence and OPUSData shows that box office revenue declined in Asia for the first quarter of 2020, amid the global COVID-19 pandemic. China, one of Asia’s key markets and the world’s second largest theatrical box office market after the United States and Canada, with a box office growth rate of about 250 percent since 2012, recorded the highest year-over-year loss in box office revenue in the region with a fall of 97.4 percent in ticket sales. In Japan and South Korea, where total box office revenue in 2019 was $2.4 billion and $1.6 billion, respectively, box office revenue in the first quarter of 2020 for the two countries fell to just $190.3 million and $139.5 million — representing a drop of 46.2 percent and 65.3 percent, respectively. India, another big market in Asia, also suffered a loss of about $130 million in box office revenue as shares of PVR Cinemas (PVR) and INOX Leisure Limited (INOXLEISUR), the country’s two largest multiplex operators plummeted by more than 40 percent within the same period – falling from all-time highs in the latter part of February.

The tumbling box office revenue is due to the spread of the COVID-19 pandemic, which began in Wuhan, the capital of China’s Hubei province, in late 2019. The pandemic, which had spread around the world by March, compelled governments in the region to issue lockdown directives – including orders that forced movie theaters to shut down their operations — in a bid to curb the upswing in new coronavirus infections. This action had a tremendous impact on the release schedules of theaters, as many film production companies in Asia struggled with liquidity challenges largely as a result of the plunge in box office revenue. For instance in China, more than 13,000 film and television companies have cancelled their business registrations already this year – this figure exceeds the total number for 2019. Many movies scheduled for production this year have been halted as more than 70,000 screens in 10,000 movie theaters in China have also stopped operating.

In Southeast Asia, Singapore, Indonesia, Vietnam, Thailand, and Malaysia have been the five major countries boosting the expansion of the region’s box office market. The film industries in these countries have also lost enormous revenues as a result of the closure of theaters. Malaysia’s film industry began to experience a dip in box office revenue in February, when  big titles from China like Vanguard, Jiang Zi Ya: Legend of Deification, Detective Chinatown 3, and The Rescue were withdrawn from the Chinese New Year movie calendar because of the coronavirus outbreak. A Movement Control Order (MCO) was implemented to minimize the spread of COVID-19 in the country. This diminished the revenue stream of the country’s film industry as cinemas were ordered to shut down. Similarly, other countries in the region such as Singapore, Vietnam, Thailand, the Philippines and Indonesia have seen their film industries continue to record a drop in revenue from low patronage of cinemas.

The closure of movie theaters and enforced precautionary measures for public gatherings changed the consumption pattern for moviegoers in Southeast Asia – according to a report from Media Partners Asia (MPA), between January 20 and April 11, 2020, the total weekly minutes spent online video streaming on mobile devices soared by 60 percent across Malaysia, the Philippines, Indonesia, and Singapore. The report further revealed that the four countries had a combined 8 million paying online video customers by the end of March 2020, accounting for $400 million in customer spending per year. Aggregate data collected from Thailand, Singapore, the Philippines, and Indonesia shows that there has been a surge in video streaming during periods of “major disruption” (meaning partial or total lockdown) in these four countries with Netflix, Viu, iflix, and iQiyi being the four main video streaming service providers with the largest subscriber base. 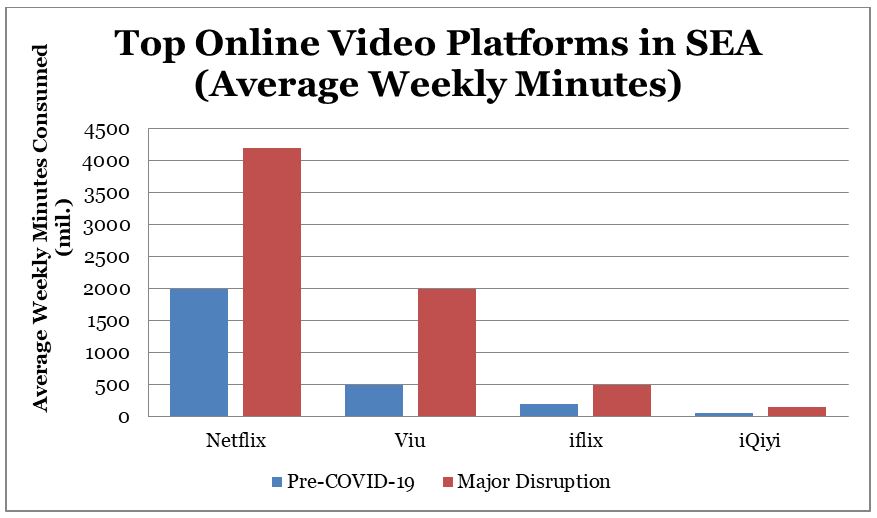 This chart shows analysis of data from Thailand, the Philippine, Singapore and Indonesia. The ‘‘Major Disruption’’ phase represents periods of partial lockdown or total lockdown in the four markets. Data from AMPD Research.

Other video streaming service providers such as YouTube and Amazon Prime Video have also gained subscribers as millions of people are operating from home in Southeast Asia during partial or total lockdowns. In spite of a booming video streaming market in the region, not all video streaming service providers are benefiting from the current market condition, as the competition in the industry has been too fierce for some companies to survive. Singapore’s video service provider, HOOQ, filed for liquidation in the last week of March 2020. The company cited intense competition in the region and failure to generate revenue within a targeted duration as the reasons for filing for liquidation. Additionally, iflix, the Malaysia-based video service provider, laid off some employees. This action has been attributed to debt issues and high risk exposures in the wake of the COVID-19 pandemic.

Furthermore, in India, the COVID-19 pandemic has altered the consumption pattern for the film industry across the length and breadth of the country. Highlights from a joint report released by the Broadcast Audience Research Council India and Nielsen suggest that during India’s 21-day lockdown, that on March 25, television viewership increased by 6 percent, from 3 hours and 46 minutes to 3 hours and 51 minutes per day. The intricacy of the report unveils movies and news as the dominant drivers of the trend, with television viewership in mega cities accounting for 22 percent of the growth rate – television viewership increased by 28 percent and 22 percent in Mumbai and Delhi, respectively. Viewership for kids’ channels was up even more, by 33 percent. Mythological shows have contributed massively in improving television viewership, especially with the rerun of the two major shows adapting Sanskrit classics of ancient India: Mahābhārata and Rāmāyaṇa.

Although India has one of the biggest and fastest growing streaming markets in the world, with a video market projected to be worth $2.4 billion by 2030, market penetration has been a daunting task for global brands. However Amazon Prime and Netflix are gaining grounds with the latter’s engagement in the past year increasing by 14 percentage points to reach 58 percent.

Conversely, China’s online video streaming market has been an indispensable source for generating revenue in the film industry, especially as COVID-19 had influenced the postponement or cancellation of 44 movies before March 15. The unfortunate turn of events during this year’s Chinese New Year holiday has cost cinemas across the country large sums of revenue. On the film industry’s calendar, the Chinese New Year holiday is considered to be the peak season for amassing large revenue. For instance in 2019, the Chinese New Year period accounted for 14 percent of the entire annual box office revenue, but box office revenue has suffered a decline this year because of COVID-19.

While cinemas have been closed for most of the time, online movie streaming has been burgeoning with a large percentage of the population confined to their homes. Some film production companies used online streaming as a medium to reach out to consumers. On January 24, Lost in Russia, a highly anticipated Chinese comedy film, became the first movie to be released for free online on platforms of ByteDance — Toutiao, TikTok, and Xigua video — exceeding 600 million views within 72 hours. Considering the remarkable viewership garnered by Lost in Russia on online platforms within a short duration, another Chinese comedy movie, Enter the Fat Dragon, was also made available on Tencent Video and iQiyi on February 1. Within three days, the comedy movie registered 63 million paid views on the Chinese video streaming website Tencent Video. In all, 26 movies were released on various online platforms during the Chinese New Year holiday in 2020, with daily viewership of movies online rising a whopping 100 percent during the holiday.

Television viewership and online movie streaming in China from January 24 to February 2 this year has been noteworthy – while television viewership had increased by 33 percent this year, the sum of online traffic had also increased with 310 million users, representing a growth rate of 17.4 percent over the previous year. On platforms such as iQiyi, Tencent Video, Mango TV, and Bilibili, the most-watched categories of movies have been comedy, romance, family, classical movies or TV dramas and medical dramas. 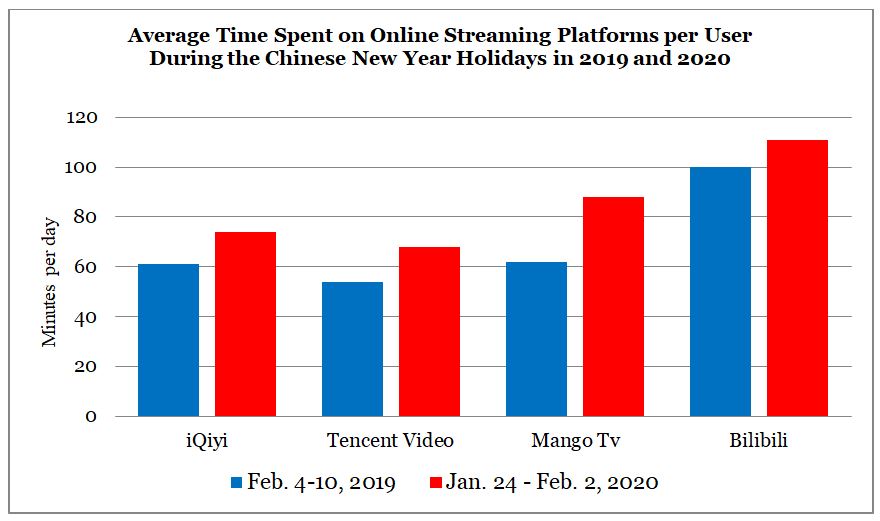 Similarly, in Japan and South Korea, where online movie streaming services have been widely used and adequately resourced in recent times for the film industries, streaming service providers such as Hulu, Netflix, and Amazon Prime Video have been a viable alternative for revenue collection in light of the COVID-19 pandemic, where movement of people to public places,  including movie theaters, has been restricted.

Alexander Ayertey Odonkor is a chartered financial analyst and a chartered economist specializing in the financial services industry in developing economies. He has a master’s degree in finance and a bachelor’s degree in economics and finance.

Dr. Hiu Man Chan is an academic, consultant, and entrepreneur with a specialty in the creative industries, focusing on collaboration in the film sector between the EU, U.K., and China. She holds a Ph.D. from Cardiff University, Master of Arts from University College London (UCL), and a Bachelor of Arts from Oxford Brookes University.

The spin-off has moved to Netflix, showing that Chinese censors are not worried about international audiences.

The 2010s: Reflecting on a Decade of Change in Bollywood

From digital streaming to the #MeToo movement, the last 10 years have left their mark on India’s film industry.

The growing lockdowns in response to the Omicron outbreak raise the threat of trade disruptions.

Government doctors, university teachers, and other workers from ports and the power and petroleum sectors are calling on the government to lower income taxes.

While a month is not enough to judge the fledgling party, the Rastriya Swatantra Party has shown itself to be no different from the others.