Japan is one of the wealthiest and most developed countries in the world, with a cultural tradition dating back thousands of years. Mongolia, by contract, is a small, developing country, with a population one-forty-second the size and an average income of about one-tenth that of Japan.

But in the sacred grounds of the sumo ring, it is Mongolia that shines.

Sumo is one of the most well-preserved representations of traditional Japanese culture, a much-revered art once closed to foreigners. As Japan became richer during the 1970s and ‘80s fewer and fewer Japanese young boys were willing to accept the brutal hardship of the sumo life. A sumo trainee enters a training school, called a stable, as a teenager, living under strict discipline, a harsh schedule of waking, cleaning, cooking, serving, training, eating, and sleeping, where his every moment is controlled by his stable master and the senior wrestlers. In addition to the grueling training, the young apprentices are often beaten by their elders.

Recruitment drives in Japan were unable to find enough trainees to keep the sport going, and so it was decided to allow foreigners. The first group were Americans, from Hawaii and Samoa, who went to Japan in the 1980s. Two of these, Akebono Taro and Musashimaru Koyo, became the first foreign Yokozuna, or grand champions. In 1992, the first recruitment competition was held in Mongolia, where nearly 100 percent of boys grow up training and competing in Mongolian traditional wrestling.

Mongolia, a country of roughly 3 million people, sandwiched between China and Russia, had spent most of the 20th century as a Soviet satellite. When the USSR collapsed, the Russians left, taking their financial assistance with them. Severe economic hardship plagued the country. When parents heard that there was a chance for their boys to go to Japan and earn a lot of money as wrestlers, many agreed. Roughly 300 Mongolian boys turned up for a wrestling competition, from which the Japanese selected six to go to Japan and begin their sumo training.

The Japanese recruiters liked the Mongolians and saw that much of the skills of Mongolian wrestling would carryover to sumo. Although sumo wrestlers tend to weigh an average of just over 300 pounds (136 kilograms), many only have a body fat percentage of 20 percent. The recruiters prefer to select lean, muscular Mongolian wrestlers, rather than recruits who are already fat. This way, after they arrive in the stable, they will be gaining weight on a solid, athletic frame.

Life in the stable was so difficult that five of the original Mongolian recruits decided to escape. Eventually, the wife of the Oshima stable master convinced the boys to come back to the stable and continue training. In the end, Mongolia wound up producing four Yokozuna: Asashoryu Akinori, Hakuho Sho, Harumafuji Kohei, and Kakuryu Rikisaburo.

By comparison, in the past 20 years, only one Japanese, Kisenosato Yutaka, has been promoted to Yokozuna and he retired two years later.

Before the first Mongolians went to Japan, most Mongolians, including the would-be wrestlers had never heard of sumo. “At that time, Mongolia was closed to the outside world,” explained Enkhbat, a driver in Ulaanbaatar. “We only had two TV channels, one Russian and one Mongolian. No one knew about sumo.”

That all changed when the Mongolians began to win. “When Asashoryu won his first tournament everyone was losing their mind in Mongolia,” according to Tuvshin, a doctor in Ulaanbaatar. After that, he said that all of the state TV channels carried the sumo events, and when the tournaments were taking place, everyone watched and cheered for their national heroes. At that time, not many Mongolians had found success outside of the country. The sumo champions became symbols of Mongolian pride and achievement. “Asashoryu Akinori was a hero and a role model for every boy,” said Tuvshin.

While still a developing country, over the past 20 years, Mongolia has become richer. Cell phones, internet, and satellite TV are readily available to the younger generation, who immediately discarded the Russian language and picked up English. Without a doubt video games and the NBA are more popular today than sumo among average Mongolian youth. Among the wrestlers and Mixed Martial Arts (MMA) fighters, however, the sumo champions are still a source of inspiration. Dandar, a freestyle wrestling coach, said, “We are very proud of our sumo wrestlers, who have won many times,” Among the Mongolian coaches and MMA fighters, the attitude is: “We dominated sumo, we can dominate MMA as well.”

Although traditional wrestling is still the most popular participation sport in Mongolia, financial support for wrestlers is a consistent problem, making the sumo life seem attractive. Top bouts can have prizes of as much as $20,000. Some bouts may also have individual sponsors who add hundreds of dollars to the prize money. In addition to small appearance fees paid to top wrestlers for participating in a tournament, wrestlers also receive a monthly income, depending on rank, as well as up to six bonuses per year. The salary for a Yokozuna is around $26,000 per month, which is in sharp contrast to the average Mongolian salary of about $400 per month.

Narantsogt Davaanyam, a 24-year-old Mongolian sumo wrestler in the lower division whose Japanese name is Sadanohikari Shinta, was inspired by his hero Terunofuji Haruo, another Mongolian sumo wrestler, to abandon his homeland and try for glory in Japan. On the one hand, Narantsogt admits that life in Japan was difficult to adjust to, particularly until he learned the language. On the other hand, he says that he grew up “in a lucky generation” because, unlike the first Mongolian sumo wrestlers in 1992, he can call his country everyday and remain in contact via social media. 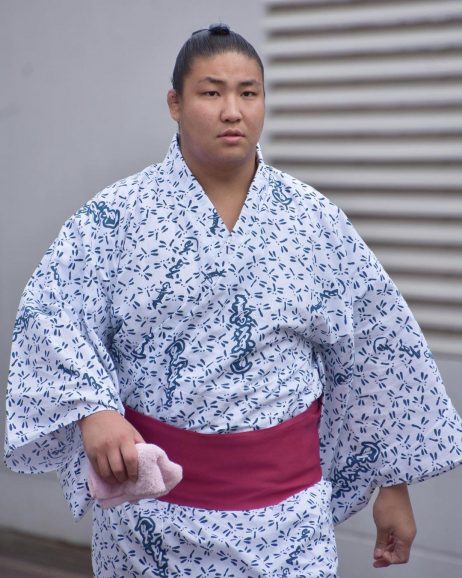 According to former Mongolian sumo journalist Dashzevegiin Altankhuyag there are more than 40 Mongolians wrestling in Japan today. Consequently, Narantsogt explained that he can sometimes meet up with other Mongolians, speak his native language, and even visit a Mongolian restaurant, all luxuries those early pioneers did not have.

Back in Bayankhongor province, Mongolia, Narantsogt had the same teacher as Terunofuji, Coach Shiirev. Terunofuj was older and gave a great deal of advice to Narantsogt about wrestling and training and his career.

Terunofuji fought his way up to the second highest rank of Ozeki, but then suffered severe knee and health problems, which caused him to miss too many tournaments. As a result, in 2017, he was demoted to the second lowest sumo rank. Generally, a wrestler who suffered such a public humiliation would be expected to retire. Rather than abandon his dreams, however, Terunofuji made a comeback. In March 2020, he tore through the Osaka tournament, winning nearly all of his matches. His August win of the high-profile Nagoya tournament made him the Cinderella Man of Mongolia.

Zoloo, a sports journalist in Ulaanbaatar, said that Terunofuji working to regain his position “is a quality of Mongolian wrestlers. We Mongolians believe that he will win again. And he will become a Yokozuna.”

Even Mongolians who do not follow sumo knew about and took pride in Terunofuji’s comeback. Batpurev an economist said, “I don’t follow the sumo. All I know is he made a dramatic comeback and people are cheering about it a lot on social media.”

Narantsogt said that he wanted people to understand that, in addition to the physical pain of the injuries and the money lost, there is a tremendous psychological cost to being demoted as Terunofuji was. In Japan, how people talk to you, if and how they bow, where you sit, stand, sleep, and eat are all dependent on your rank. Terunofuji went from a very high rank to a very low rank and lost all of that respect. “Some important people who previously welcomed him may even have pretended not to see him after he was demoted,” said Narantsogt.

When asked what he thought about Terunofuji’s amazing comeback, Narantsogt said, “He is a man of steel.”

Dr. Antonio Graceffo is an American economist and author based in Ulaanbaatar, Mongolia.

Trash to Treasure: A Mongolian Man Turns a Landfill Into a Children’s Park

A former migrant worker singlehandedly built a children’s park out of a landfill in Ulaanbaatar.

Mongolia Wrestles With Violence Against Women

In Mongolia, a pivotal national report on violence against women and a call for men to be allies.