Despite being one of the earliest countries to see an outbreak of COVID-19, South Korea has largely received international praise for its effective containment of the virus. Headlines like “What’s Behind South Korea’s COVID-19 Exceptionalism?” and “How South Korea Successfully Managed Coronavirus” tout South Korea’s mix of preparedness, technology, and extensive testing as a successful model worth emulating. While many countries are still struggling to stem the increase of confirmed COVID-19 cases and deaths, South Korea has managed to keep COVID-related deaths under 1 per 100,000 residents.

In contrast, the United States has become a major COVID-19 hotspot with the highest number of confirmed cases and deaths in the world. The U.S. government’s pandemic response has also become highly politicized with the debate over proper public safety measures leading to a fractured public adherence to simple measures like mask wearing and social distancing. The United States’ handling of COVID-19 has become a lightning rod issue for the upcoming presidential election, which was even more underlined by President Donald Trump’s own contraction of the virus.

With seemingly no end in sight to the crisis, how do Americans think the United States is handling the COVID-19 pandemic compared to other countries like South Korea? To answer this and other questions affecting U.S.-Korea relations, KEI commissioned a study by YouGov that surveyed 1,248 American adults on August 26 to the 31. When asked from a list of countries which ones handled the COVID-19 outbreak well or poorly, 54 percent of survey respondents indicated that South Korea had handled COVID-19 “very well” or “well.” Only 13 percent indicated either “poorly” or “very poorly,” with 33 percent responding “not sure.”

While most Americans view South Korea’s COVID-19 response positively, other countries including Canada (68 percent), Japan (61 percent), and Australia (58 percent) received higher marks despite South Korea performing better that these countries in several key metrics, including the number of cases per 100,000 residents (included in the below graph). This could be attributable to a knowledge gap for many Americans on South Korea in general. 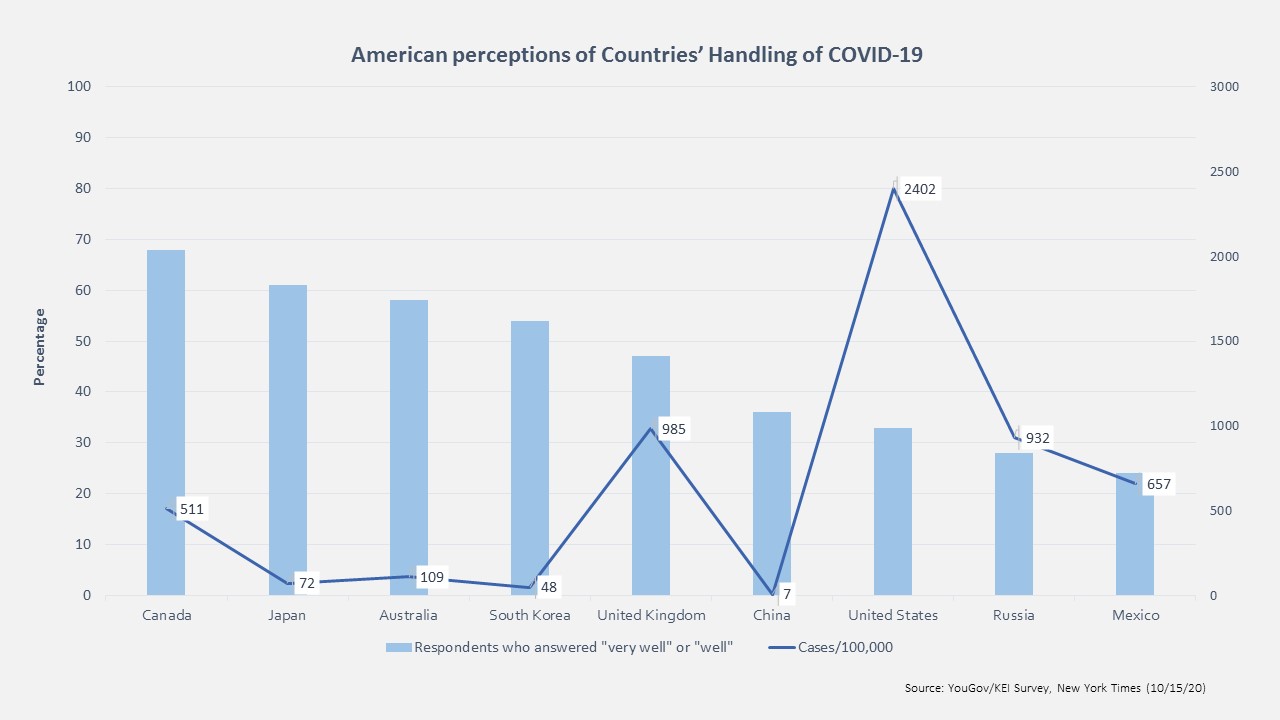 Other results from the survey showed Canada, Japan, and Australia consistently receiving higher numbers when respondents were asked about which countries are viewed as a friend of the U.S., are influential in the world, and should cooperate with the United States on cyber issues. Even for respondents that indicated they follow international news, South Korea sees a jump to 70 percent that still trails Canada (77 percent) and Japan (76 percent).

While the numbers are still positive toward South Korea and echo the international praise for its response, there is much to be gained from the U.S. learning more from the COVID-19 response in other countries like South Korea. The added perspective in understanding how other countries have handled COVID-19 can provide much needed context for how the U.S. is performing overall. Even South Koreans are not immune to a partisan split in rating their own government’s performance, but a greater understanding in the U.S. of what works elsewhere in the world can help save lives and stem economic losses stateside. To date, South Korea has only recorded 450 deaths due to COVID-19 and its GDP is expected to decline only 0.8 percent this year, the best such projection among Organization for Economic Cooperation and Development member nations. In contrast, the United States has over 226,000 deaths and the OECD projects GDP will decline by 7.3 percent.

The shootings of six Asian Americans brought deadly urgency to the issue of anti-Asian sentiment in the United States.

The wisdom and morality of serious intellectual property enforcement during a pandemic are uncertain.

Jumpstarting the US-Japan-Korea Trilateral Amid COVID-19

The U.S. should encourage trilateral cooperation with South Korea and Japan to fight the pandemic, with an eye toward saving the Tokyo Games.