Host to 31 U.S. military bases, Okinawa, Japan’s southernmost prefecture, is no stranger to the risks of bearing the burden of the U.S.-Japan alliance. In 1959, the U.S. military accidentally shot a nuclear rocket into a local harbor; six years later, it lost a hydrogen bomb in nearby seas; then in 1969, a leak of nerve agent on the island so shocked the world that President Richard Nixon was forced to renounce his nation’s first-use policy on chemical weapons.

But these incidents pale compared to what Okinawans are facing today: the U.S. military has polluted the drinking water for 450,000 people – a third of the prefecture’s population – in the worst case of environmental contamination in the island’s history.

The chemicals causing the problem are per- and polyfluoroalkyl substances (aka PFAS) which are used in the production of food wrapping, nonstick cookware and military firefighting foams. PFAS are highly resistant to heat, oil and water, but in these strengths lie their dangers. Virtually indestructible in nature, they accumulate in our bodies, taking decades to expel. According to the U.S. Agency for Toxic Substances and Disease Registry, health problems linked to PFAS include cancers of the kidneys and testicles, high cholesterol and decreased vaccine response – a particular concern during the current pandemic.

Okinawans first realized their island was contaminated with PFAS in 2016 when tests by local authorities detected high levels of the substances in rivers running through and near Kadena Air Base, the largest U.S. Air Force installation in the Pacific. The discovery prompted further checks near military facilities on the island, revealing elevated PFAS levels in spring water, fish and farmers’ fields. Most alarming, prefectural officials found PFAS in the island’s drinking water, which is sourced from rivers near Kadena Air Base and an aquifer beneath the facility. Levels peaked at 120 parts per trillion (ppt); as a comparison, the U.S. Environmental Protection Agency recommends a maximum level of 70 ppt – but even this, say experts, is way too high.

The contaminated drinking water is supplied to seven municipalities – home to 450,000 Okinawans, thousands of U.S. service members and their families, and, at least in pre-pandemic times, millions of international tourists. Checks on residents who regularly drank the water showed that blood levels of some PFAS compounds were 53 times higher than the national average.

The findings shocked many Okinawans – but perhaps they shouldn’t have come as a surprise. PFAS contamination from firefighting foam has been detected on military installations throughout the U.S. In March, the Department of Defense announced there were 651 stateside bases with such suspected pollution. In the U.S., when PFAS contamination is discovered, the military holds meetings with local communities and supplies them with alternative water sources. The Department of Defense has also admitted to PFAS contamination at its bases in South Korea, Belgium and Honduras.

So how has it responded to polluting the drinking water for 450,000 people in Japan? With a deafening silence.

In 2016, Okinawa government officials asked permission to inspect Kadena Air Base. Four years later, they’re still waiting for approval, while requests by local residents have been met with similar silence. When the Pentagon does deign to comment on the matter, it claims that it can’t be sure of the source of the contamination. In 2019, for example, a military spokesperson told the media, “It would be inappropriate to speculate where the presence of [PFAS] in off base waterways originated.” (Okinawa possesses no large-scale industries that manufacture or use the substances.)

One way to pry open the military’s opacity has been via the U.S. Freedom of Information Act. Internal reports from Kadena Air Base reveal that between 2001 and 2015, the facility mistakenly released at least 23,000 liters of various firefighting foams. One notable case from 2015 involved a drunk marine trespassing into one of Kadena’s hangars and activating the sprinkler system; military reports described the act as “vandalism.” In-house documents also confirm PFAS hotspots within the base. 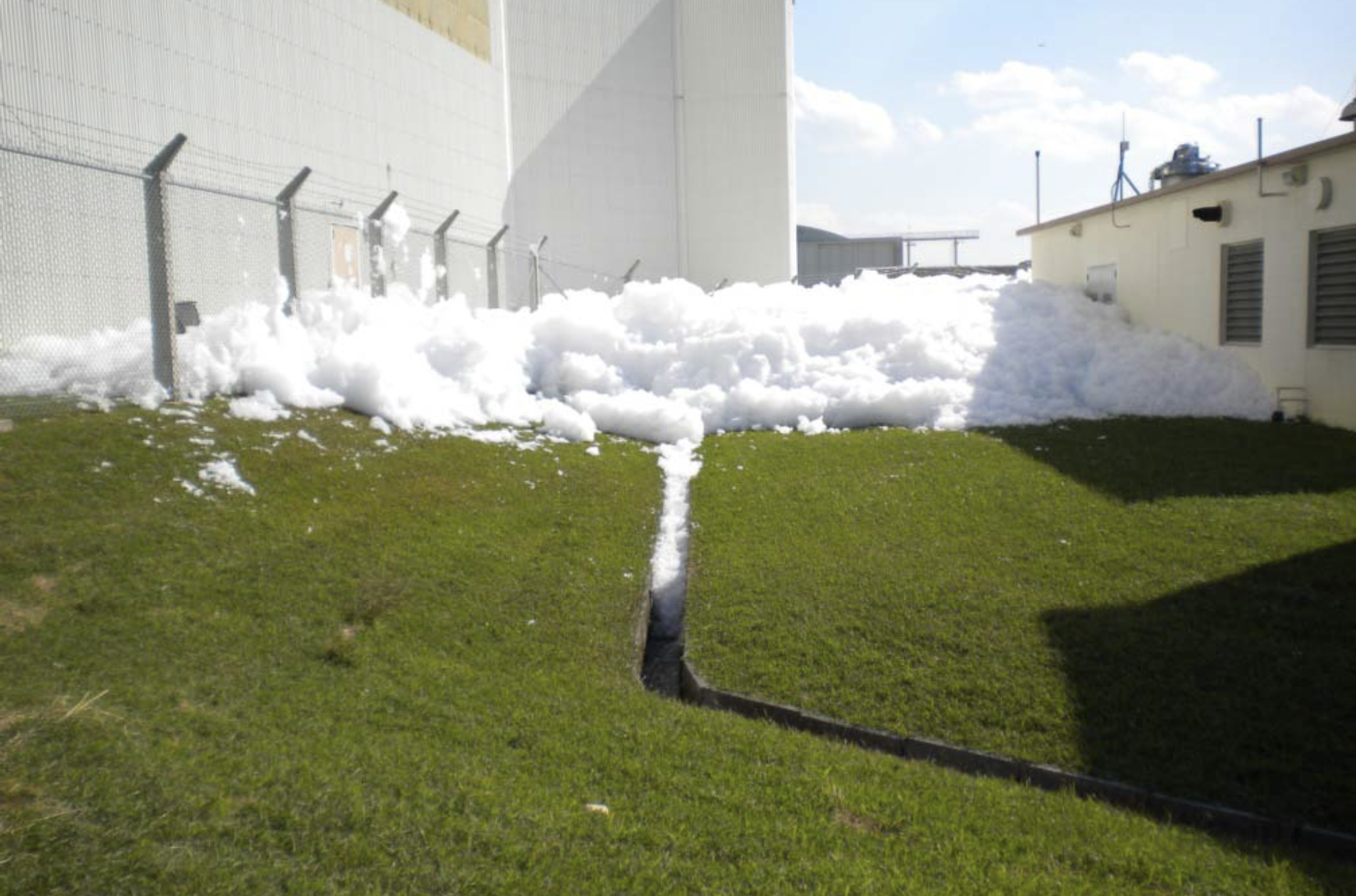 On Kadena Air Base, Okinawa prefecture, an accident blamed on a malfunctioning sprinkler system discharged tens of thousands of liters of firefighting foam in December 2013. Photographs obtained from the United States Air Force via the U.S. Freedom of Information Act.

Despite this evidence, the military continues to stonewall Japanese officials’ requests for on-base checks. At the root of the problem lies a six-decade-old Status of Forces Agreement (SOFA), signed at the same time as the U.S.-Japan Security Treaty. The agreement outlines how the U.S. military operates in Japan, including who can enter its facilities, and Japanese officials – it’s clear – are not included on the guest list. Whereas the status of forces agreements of other U.S. allies, such as Germany, permit access by local authorities, in Japan the bases remain off-limits. When it comes to environmental compliance, the military is allowed to police itself; bases are not subject to Japanese laws or punishment following violations. Even when the military returns land to civilian use, SOFA exempts it from the need to conduct clean-ups. Between 2003 and 2018, Japanese tax-payers paid out 13 billion yen ($124 million) to remediate former bases on Okinawa, many of which were tainted with toxins such as dioxin, asbestos and lead. As for PFAS, Japan has been paying millions of dollars for filters at the island’s main treatment plant to try to lower levels in the drinking water.

In April of this year, Okinawans’ anger flared again when a barbecue party held by marines at Futenma Air Station triggered a hangar’s sprinkler system. 140,000 liters of PFAS firefighting foam and water spilled off the base; marines did nothing to help the clean-up outside the fence line. Okinawa’s governor, Denny Tamaki – himself the son of a U.S. marine – slammed the accident as extremely careless.

Six days after the spill, in an unprecedented development, the U.S. military allowed Japanese officials to inspect the accident scene. It was a rare concession but some residents saw it as a step – albeit small – in the right direction.

Opinion polls generally show the majority of Okinawans support the U.S.-Japan alliance – but they wish their prefecture wasn’t burdened with 70 percent of the U.S. military presence in Japan. They also wish SOFA would be overhauled; 39 of Japan’s 47 prefectural governors agree that SOFA needs to be rewritten. At the time it was penned 60 years ago, nobody realized how harmful military operations could be to the environment, but in the ensuing decades, it has become clear that concentrating the U.S. military presence on Okinawa concentrates contamination there, too. If the U.S. wants to maintain Okinawan support for the U.S.-Japan alliance then it needs to understand that protecting human health and the environment is inseparable from its wider mission of protecting Japan.

Winner of the Foreign Correspondents’ Club of Japan’s lifetime achievement award for press freedom, Jon Mitchell is the author of three Japanese books about military contamination and the forthcoming “Poisoning the Pacific” (Rowman & Littlefield).

The Resurgence of the U.S.- Japan Relationship

While some focus on recent tensions, Tokyo and Washington have been quietly strengthening their security alliance.

The outbreak at U.S. Marine Corps facilities has raised concerns on the island.

Japan Gears up for Electronic Warfare

Japan is going electromagnetic, with implications for Japanese security policy and the U.S. regional strategy.