Ten years ago today, Japan was rocked by a magnitude 9 mega earthquake, followed by a giant tsunami, that brought the country to a standstill. The disaster devastated Japan’s northeast coast, killing some 20,000 people and leaving thousands more missing.

Japan was caught off guard by the strongest earthquake ever recorded, which not only traumatized the entire country but also sparked political chaos amid the ruling government’s inexperience in disaster response. That set in motion urgent calls for new standards in disaster preparedness.

The 10-year anniversary of the disaster stirs mixed emotions in Ueno Shigehiko, 52, who was forced to flee with his family to the land-locked prefecture of Saitama, north of Tokyo, after his home and factory in Kesennuma were destroyed. The hard-hit fishing town in Miyagi prefecture was reduced to rubble and almost swept off the map by the tsunami triggered by the earthquake.

Saitama is a home away from home. Ten years after relocating to this sprawling suburban yet urban commuter town for Tokyo, Ueno is still shocked by the change of scenery. “The 10-year anniversary is just one day, but for me I think about it every day. I still wonder why I’m here [in Saitama],” he jokes. “You can’t compare 10 years in Saitama to 42 years in Kesennuma.”

For a fishing town like Kesennuma, the sea is a source of pride. But the ocean also proved the source of the town’s undoing. It was once a bustling fishing port and fish market home to cargo ships, fishing boats and sailors, and famous for tuna, salmon, squid, sea urchin, and bonito.

Ueno was born and raised in Kesennuma. After the disaster of March 11, 2011, he was left to pick the pieces and start from scratch at 42. At the time he owned a business, inherited from his father, that made fertilizer from oyster shells. After the factory was washed away Ueno said he knew there would be no more work in a town dependent on the local fishing industry.

“I never thought I’d be in this position. All the years I had put into that job – it was gone in a blink of an eye and I now wish I had done a job I loved. This is what I tell my two children.”

Ueno is an avid mountain bike rider and he and his wife find joy going on regular trips to the seaside. “The sea can be a scary place but it’s the sea and the mountains that make up Kesennuma,” he says. “It’s what I got used to looking at for 42 years.”

The first time he came to the capital was when he evacuated to Saitama eight days after the tsunami on a government program providing homes rent-free to disaster victims. Until then the closest he had ever come to Tokyo was during middle school when he went to Tokyo Disneyland shortly after its opening in 1983. The park is located in neighboring Chiba prefecture, 1.5 hours away from Tokyo.

Unlike residents who are still unable to return to no-go zones close to the nuclear disaster, he says he feels incredibly lucky to have the option to move back. Even so, in spite of Kesennuma’s new disaster-proof housing project on artificially elevated land completed in 2019, Ueno says the town will never be the same again unless its fishing and seafood industry bounces back. With depopulation worsening in Kesennuma and rural Japan in general he has doubts the new housing will be enough to encourage residents to return.

Despite these revitalization efforts Ueno says Kesennuma’s landscape still remains unrecognizable. “The town has not recovered at all. I’ve gone back many times and there’s a seawall now, but it’s still not a town yet. On TV I saw some images of revitalization, but it’s only a small part that’s developing. I feel sad that I don’t have a hometown to go back to and enjoy a cooked homemade meal.”

He is now a homeowner in Saitama, which was partially subsidized by the local government. But it’s a world away from the life he built in Kesennuma. “There’s no job to go back to and in Saitama I didn’t really know anyone and don’t have any family here.”

The disaster is still a sensitive topic and his family still carries scars that they’d rather not talk about. “For many years we just didn’t talk about it and actually even now we don’t really talk about it,” he says. “My children refuse to watch television and news reports on the disaster.”

While he doesn’t want the world to forget, every anniversary continues to be a painful reminder. Ueno says he and his wife can’t help but get emotional when they see footage of the disaster. “Even yesterday when I turned on the TV I couldn’t stop crying and my wife too. “

Ueno doesn’t carry resentment, but if he could change one thing it would be ensuring telephones are operational immediately after a massive disaster to prevent people from making risky decisions in the absence of information. “Building a high seawall is well and good but if there only had been a way to communicate… because after the earthquake some worried mothers rushed to pick up their kids from preschool without knowing they had already fled to higher ground. Many died en route.”

Immediately after the quake, 2.5 million households were without electricity. With power lines washed away, power plants flooded, and towns surrounded by water, evacuation centers were cut off from the outside world. “For many days we had no food, no bedding, no electricity and no information,” he remembers. “For almost a week I didn’t even know about the nuclear disaster at Fukushima Daiichi.”

Over the last 10 years he says he has learnt about the importance of memorials and the need to bring visitors to help the town’s revitalization. “There was fierce public debate whether or not to have memorial sites because Kesennuma was never a tourist hotspot,” Ueno explains. “I used to think it was a waste of money and I wanted them to leave but now I understand why they want to remember history because the photos don’t convey the extent of the devastation.” 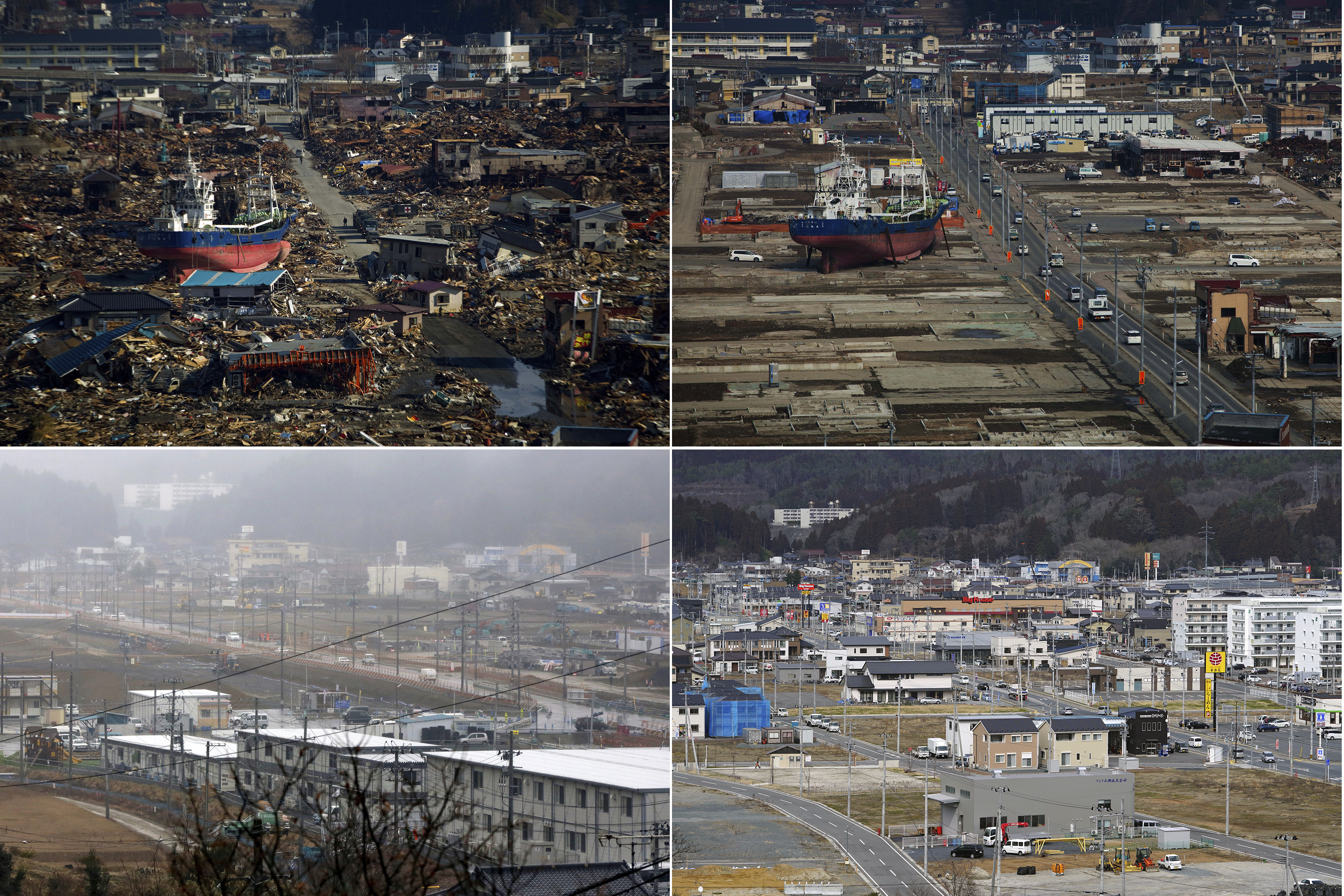 In this combination photo, from top left to bottom right, a ship washed away by the tsunami sits in a destroyed residential neighborhood in Kesennuma, northeastern Japan, on March 28, 2011, the same ship sits on the same spot on Thursday, Feb. 23, 2012, the same area is seen on March 6, 2016 after the ship was dismantled and on March 5, 2021. AP Photos by David Guttenfelder and Eugene Hoshiko.

Survivor Ueno Shigeki reflects on the unimaginable 2011 earthquake and tsunami, which decimated his coastal hometown of Kesennuma.

A series of safety breaches compounds fears that TEPCO has failed to learn from the Fukushima nuclear disaster in its bid to restart a Niigata nuclear power plant.

A resurgence of cases in Tokyo and Osaka casts doubt on the idea of a coronavirus-proof Olympic Games.

Infections are rising in parts of Japan, including a worrying increase in new variants.

The Biden-Suga summit this week will help set the tone on the allies’ cooperation on “Beyond 5G” technologies.

Countries may backtrack on democracy, but never on Facebook usage.

Chinese exports to the United States jumped 53.6 percent in March to $38.7 billion despite tariff hikes still in place on Chinese goods.

Taliban Not Ready to Attend Turkey Summit on Afghan Peace

A Taliban spokesman said the group was not ready to attend the conference the U.S. and the Afghan government had hoped to start on April 16.

Malaysia and Indonesia in the Middle East

Official: Iran to Enrich Uranium to 60%, Highest Level Ever

Following an Israeli attack on the Nantaz nuclear facility, Tehran has doubled down on its nuclear goals, raising the specter of regional crisis.