As one of the world’s most technologically advanced societies, Japan is as dependent upon access to space as any country in the world. Much like the United States and Western Europe, the Japanese economy requires spaced-based communications technology to knit together the fabric of its industrial base. Indeed, by some estimates Japan has the fourth most orbital satellites in the world. Although the Japanese Self-Defense Forces do not operate in the same geographic scope as their U.S. or European counterparts, they still require satellite technology for communications and surveillance purposes.

Consequently, Japan has steadily increased its institutional military engagement with space, allowing the Ministry of Defense to collaborate with Japan Aerospace Exploration Agency (JAXA), the civilian space agency, for the first time in 2012. Japan also established a Space Operations Squadron (SOS) within the Air-Self-Defense Force in May 2020, with expected operational readiness in 2023. The squadron will have 100 members by the time it stands up. The portfolio of the squadron, which seems to most closely resemble the former Air Force Space Command in the United States, includes liaising with U.S., German, and French space organizations.

As framed thus far, the responsibilities of the Space Operations Squadron will be largely defensive, including the tracking of satellites and space debris in order to avoid collisions, as well as the monitoring of potentially hostile foreign satellites. Japan has not undertaken an anti-satellite test, and it is unclear how the development of offensive anti-satellite technology would sit within Japan’s constitutional framework, but the legacy of World War II continues to loom large in East Asia, and it is difficult to imagine that an ASAT test would be well-received either inside or outside of Japan. It is not difficult to imagine, however, that Japan’s SOS could profitably share responsibilities with the U.S. Space Force in ways that would enhance the latter’s counter-space capabilities — as suggested by the graphic below, which outlines a plan for enhancing space situational awareness (SSA) between, JAXA, the Japanese Ministry of Defense (MOD), and U.S. forces. 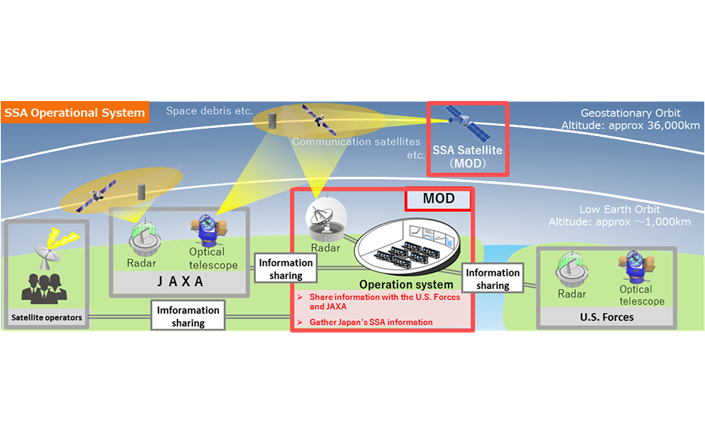 Graphic from the Japanese Ministry of Defense

Japan has also pressed forward with civilian efforts to ensure access to the space domain. In line with Japan’s longstanding foreign policy commitment to free transit of shared domains, it has taken the lead on developing techniques for “cleaning” space of human-made debris and junk. This effort involves a public-private collaboration involving several firms collaborating with JAXA on using alternative techniques for clean-up, from magnetic docking systems to electromagnetic tethering to lasers.

Japan’s dependence upon space is a vulnerability. However, Japan’s advanced technological base makes it an enormous potential space power, and it is not difficult to imagine Tokyo flexing its “space muscles” as the strategic situation in the Indo-Pacific evolves. The Space Operations Squadron is the first indication of such a flex.

How Far Could the Quad Support Taiwan?

The Quad is supposed to help counterbalance China’s rise, but it remains unclear whether the bloc would intervene in the event of a Taiwan Strait conflict.