Commodity prices have been rising throughout the global economy as depleted inventories after COVID-19 have led to massive inventory restocking as businesses open again. Shipping bottlenecks have pushed up prices of tin and sugar. Low interest rates have resulted in a remodeling boom in the United States, adding to demand for lumber and copper. A drought in South America has constrained the supply of corn as demand for corn-based ethanol is rising. All of these factors have resulted in rising commodity prices, which have increased producer prices in China as well.

Does producer price inflation matter for monetary policy? Yes, it matters, but doesn’t play a major role in Chinese monetary policy. I recently carried out an analysis on the effect of the consumer price index (CPI), producer price index (PPI), and GDP on liquidity injections or removals. The technical findings are discussed in a bit more detail here. I found that only the CPI had a strong impact on whether liquidity was injected or removed, and a smaller impact on the actual size of open market operations. This is probably because consumer price inflation eats into the cost of living and can give rise to social instability, so the People’s Bank of China is careful to keep this type of inflation under control.

The annual CPI inflation rate can be seen below. The government’s annual target for the CPI is 3 percent, and inflation has been below this metric for the past eight years without the government having to withdraw a great deal of money from the economy. This means that the economy has been working well, but that demand for products is not excessive. 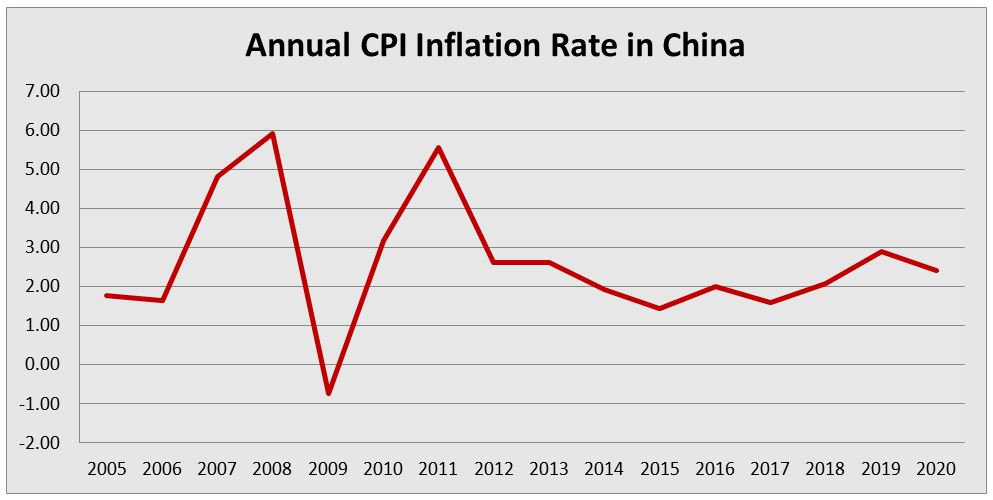 A little bit of consumer price inflation is considered good, because it means that the economy is functioning at capacity and people are choosing to purchase goods now rather than wait until later. Too much inflation means that people will start hoarding goods because they believe prices will be too high in the future, and wages cannot keep up with the price of products.

In China, the low CPI indicates that the economy is stable and that the price mechanism is functioning well. Therefore, it is highly unlikely that the government will withdraw liquidity from the economy, although it may choose to reduce the rate and/or amount of fund injections.

However, we need not be overly concerned about what China’s central bank will do. China’s government is very good at communicating future policies, and has clearly stated that it is more concerned about improving economic growth than cracking down on mild inflation. This is in part because officials do not foresee long-term inflation and expect producer price inflation to decline soon as supply recovers. It is also because the Chinese economy is continuing to recover after the COVID-19 epidemic ravaged the economy.

As a result, we expect the central bank to continue to add liquidity into the economy in order to bring back demand and stabilize the economy. In addition, we know that the People’s Bank of China will communicate future changes in monetary policy to the public in order to ensure smooth functioning and avoid major economic shocks. If the central bank does eventually decide to tighten up monetary policy, it will be because the economy is roaring once again and demand is soaring. As of now, that moment seems very distant indeed.

The Commodity Craze Creates a Supply Gap for China

Can China Achieve Its Growth Target This Year?

By Wei Hongxu and He Jun

Speculation that Russia might liquidate its yuan-based foreign reserves has spooked investors, resulting in the biggest month-to-month loss ever.

The real estate downturn and inflation will cause headaches in the new year, while the emphasis on common prosperity continues.

5 reasons why Japan decided to jointly develop a next-generation fighter with the U.K. and Italy, not the U.S.