The recent arrest of the head of Myanmar’s COVID-19 vaccination program came amid the extended mismanagement of the pandemic by the country’s military.

The rising number of coronavirus cases has prompted the military government to issue stay-at-home orders for some townships, but with doctors held in prisons or turned into soldiers of the anti-junta People’s Defense Force (PDF), no medical centers are able to heal Myanmar from the pain its rulers are inflicting upon themselves and the rest of the nation.

Shortly before her arrest on February 1, which also marked the beginning of the coup, Aung San Suu Kyi had written a note calling for her supporters not to work for the generals. It did not take much time for the leaderless Civil Disobedience Movement (CDM) to spread over the whole country and impact all the sectors of the economy.

“Small businesses are gone,” said Phyoe Wai, who had also shut down his restaurant at the edge of the Samkar Lake. Not far from him, in the country’s smallest state, Kayah, the Tatmadaw bombed towns and villages, forcing around 100,000 people flee their houses.

A strike is also underway in the private banking sector, launched under the presumption that a falling banking sector would cripple the junta. Ironically, however, the shuttered banks are also posing difficulties for Myanmar people willing to transfer funds for the support of the pro-democracy movement. “Money can’t be easily withdrawn from my account as the ATMs often run out of banknotes,” Phyoe Wai lamented.

The CDM has been nominated for the Nobel Peace Prize, but it is not the applause from abroad that keeps the movement together. A sense of responsibility for the future of the country is the value that unites people from all walks of life.

“Currently, I am hiding in a friend’s house,” said Yu Kyi, an activist from the city of Taunggyi. “Our protest was crushed by the military, and seven people were arrested. I was so fortunate to run away and hide while police chased after us with private cars. It could have been me who got shot and arrested.”

Those in the resistance movement do not what day and time the security forces may come after them, even if they stay away from street protests.

“At 2 a.m., the house of one of my support teammates was raided, [and] she was beaten up. The CDM people she was helping were arrested too,” Yu Kyi added.

There are also reports of people being detained by the military and subsequently tortured to reveal the location of other striking people.

“No one is safe – I will try to stay in the village, with almost no electricity,” described Mya Wun, a women’s rights activist and journalist in hiding, who had an arrest warrant issued against her for publishing content about the protests and the CDM on her Facebook profile.

Medical workers that spearheaded the protests and members of other professions have remained committed to fight till the end of the anti-military revolution, yet some scratches have started appearing on the surface of the movement.

“Because of the pressure, some people decided to return to work,” said a 30-year-old doctor, nicknamed Ooh Ooh. “Sometimes the military sends letters to a family and they fear arrest of the family member; sometimes people have financial difficulties.”

In her view, “the movement is very effective.” She added that “if people ask me for medical help, I will help them as much as possible but won’t return to work.”

“In the beginning I was also assisting the protesters who were wounded during demonstrations; now I need to hide myself to avoid arrest,” she said. “I stay mostly in a rural area.”

“It takes time to win over the dictatorship – I respond to all my colleagues who ask me if I consider returning,” Ooh Ooh added. “[The] military is wrong in thinking they can run the country, the healthcare system as the NLD could.” 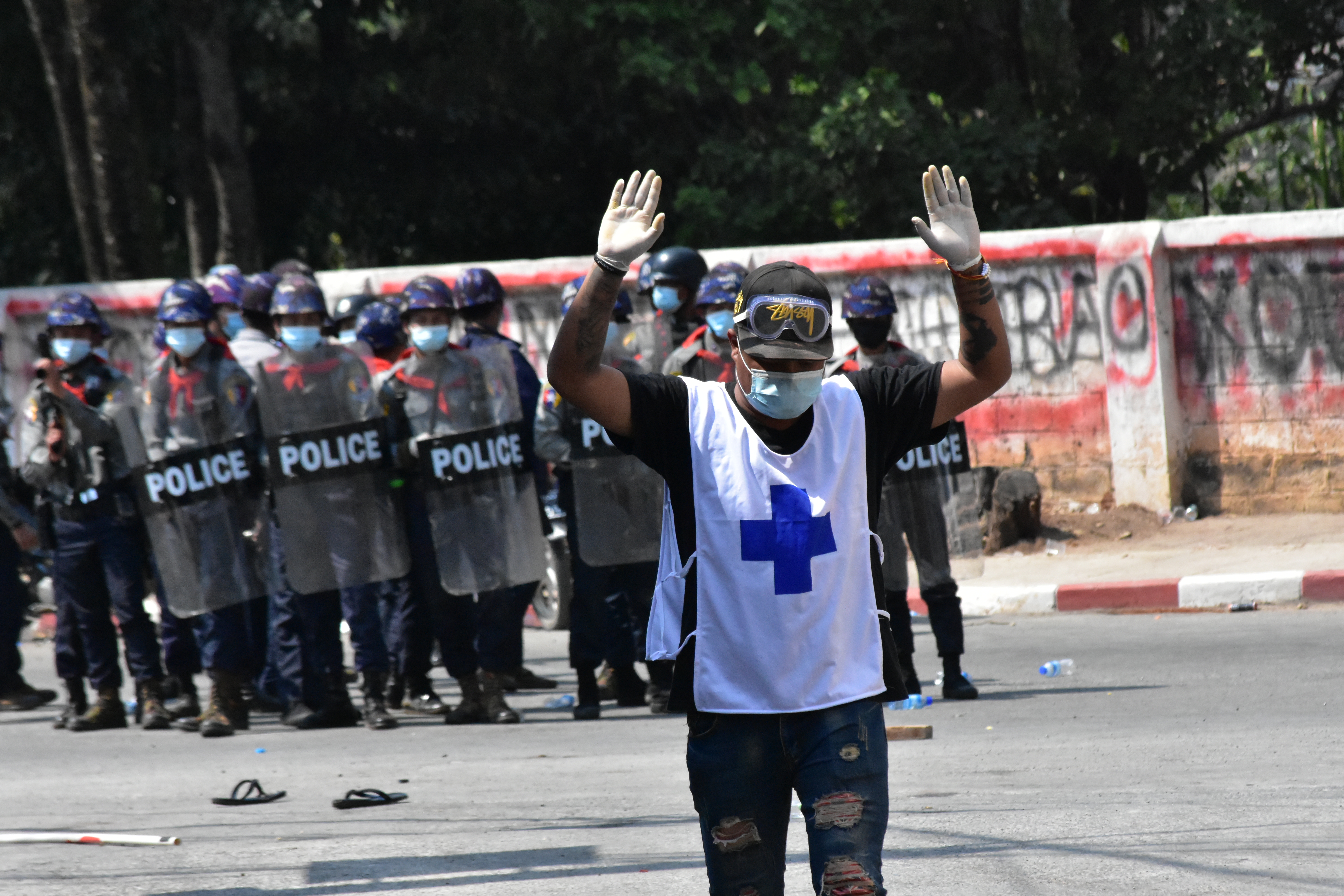 Medical workers have become the targets of the junta. Photo by Robert Bociaga.

And indeed, the Myanmar public has not made donations to military-run healthcare centers, in a striking difference to the times before the coup.

Htun Htun from Taunggyi is a member of a group that supports the CDM. “We need to queue from 4 a.m. every day to withdraw the money,” he said. “Fortunately, we are able to raise the funding for our heroes, but some CDM people and also donors are getting impatient with the situation.”

According to Htun Htun, “CDM people find it increasingly difficult to cope, as they live in constant fear of arrest, and need to wait for money for a very long time.”

That’s why some people returned to work, but “for most this is out of question to work for the military,” he explained.

For Myat Zaw, a 55-year-old university teacher from Yangon, the decision to continue the strike was easy. “All my students can learn from me how to behave in times like these,” he said.

“The military can’t force me to return to work – I am sure the students won’t come back to schools and universities,” he added.

In early May, 5,000 university teachers were stripped of their qualifications due to their participation in the CDM. As the junta plans to reopen schools and universities, a large number of professors refused to resume classes as ordered. Almost 20,000 striking university and college teachers (out of a total of 35,000) have been suspended from their jobs. In basic education, over one-quarter of teachers and education staff joined the CDM.

According to the United Nations, Myanmar is approaching the point of economic collapse, which will result in up to 25 million people, nearly half of the population, living in poverty. The country’s currency, the kyat, has been weakening, increasing the price of imports and energy.

Armed conflicts, Myanmar’s growing isolation, and a falling economy – the list of troubles with which the military needs to deal with is long and deepening, yet the officers have not changed their stance an inch.

It remains to be seen what will tip the scales in Myanmar. Recently, 12 people died in a military plane crash, for which some blamed the lack of qualified personnel. How long can a country function without the democratic leaders in charge, and with nearly all professions in some state of strike?

“I understand people who can’t continue the CDM,” said Htun Htun. “I don’t blame anyone but the military. We will win!”

The Danger of Defending the Defenseless in Myanmar

Lawyers that offer to represent protesters detained by the junta are themselves facing abduction and arrest.

Doctors, nurses, and medical students have marched and joined strikes to show their opposition to the military coup.