In downtown Yangon, a red brick colonial building erected by the British in 1899 still serves as the Yangon General Hospital. Despite multiple renovations over the past century, the building remains nearly derelict, with cracks in the walls and fading paint.

The hospital has a dark history, having witnessed the brutal suppression of nationwide uprisings by the military, also known as the Tatmadaw, in 1988. During the uprising, pro-democracy activists were massacred in the wards of the hospital as they sought refuge and treatment at the height of the junta’s crackdown.

In contrast with previous uprisings, the same wards today remain empty, and chains block off the main entrance. Since the Tatmadaw again seized power on February 1, the hospital has been closed to the public in solidarity with the nationwide strikes coordinated by the Civil Disobedience Movement (CDM).

Health workers all across Myanmar are taking part in the CDM, which has helped grind the state’s gears to a near-halt with sweeping public sector strikes. The movement was initially launched by health professionals who, struggling to contain the COVID-19 pandemic, rejected the legitimacy of the military. Indeed, the staff of Yangon General Hospital have played a prominent role in leading the dissident movement.

Up until the coup, Myanmar had been under strict stay at home orders to prevent further outbreaks of COVID-19. The yearlong restrictions were lifted immediately after the civilian government was ousted. In February, the United Nations’ country coordinator announced via video conference that “public healthcare has collapsed with nearly all COVID-19 testing and treatment halted.”

Dr. Min, a senior doctor, has worked at Yangon General Hospital for over 30 years. In his time working there, he has seen advances in the healthcare system interrupted by its stagnation under military rule. For Dr. Min, who asked to use a pseudonym due to concerns for his safety, a familiar sense of dread consumes his outlook as he contemplates once again working directly under the Tatmadaw.

“The military kept us in the dark ages for decades,” he told The Diplomat. “We were always denied access from working alongside international agencies to address the failures of the current system. Following democratization, our hospitals have not only received greater funding and support, we can voice our concerns without fearing repercussions.”

For generations, Myanmar has had one of the poorest healthcare systems in Southeast Asia. In 2000, the World Health Organization (WHO) conducted a comprehensive study of the world’s public health systems around the world in which it ranked Myanmar dead last: 190th out of 190 countries. Consequently, the nation has exceptionally high rates of infant mortality and infectious diseases, alongside low life expectancy.

Following its election in 2015, the National League for Democracy (NLD) government announced a number of crucial reforms to the public health system that elicited a newfound hope among healthcare practitioners like Dr. Min.

In 2017, the NLD government launched a National Health Plan (NHP), which aimed to establish basic packages of healthcare services across the country by 2020. The plan’s immediate goals were to invest in the accreditation, training, and support of health workers, as well as developing immunization programs and health clinics in every corner of the country.

Dr. Min said that the NHP came as a “relief” to him and many other medical practitioners. “We’ve not asked for better salaries or working hours,” he said. “Our goal was to be given the support from government institutions to allow doctors to carry out their basic duties. The National League of Democracy has shown a political commitment to this which has already led to a direct increase in the efficiency and effectiveness of our departments.”

Dr. Min lamented the fact that despite the changes introduced, the current healthcare system still fails to provide basic levels of care to the nation’s 54 million citizens. 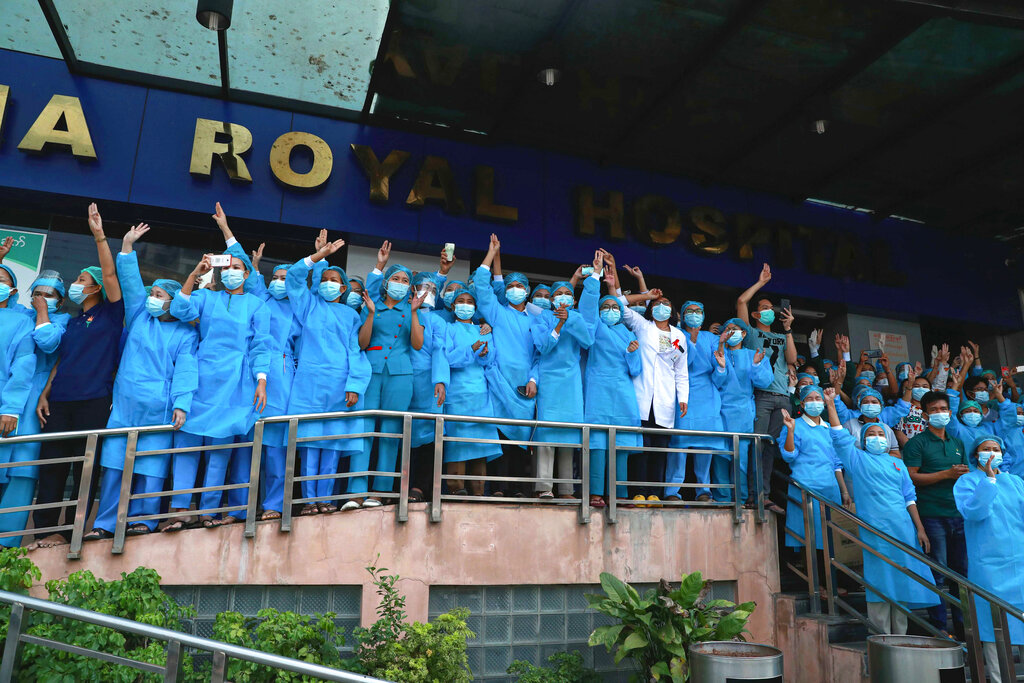 Another doctor from a Yangon hospital who asked to remain anonymous expressed fears about how healthcare would be managed under the junta’s rule. “In the past, senior management levels of healthcare were controlled by military-related people, with or without management skills,” he said. “There was never a consistent budget allocated for healthcare, so patients often had to pay for treatment themselves.”

The doctor emphasized how corruption had often been an obstacle in the development of public health under the junta, due to the unprecedented privileges granted to Tatmadaw personnel. “We had to give priority to military-related patients regardless of the severity,” he said. “If we refused, we were threatened with violence, sometimes transferred to a remote location or jailed.” The doctor predicted that the current junta will see increased rates of mortality and morbidity.

However, the arrival of civilian politics created a new dynamic within the structures of many governmental institutions. Under the military junta that ruled prior to 2011, public spending was opaque; it was estimated that the country spent less than 2 percent of GDP on healthcare. Combined health and education spending was greatly overshadowed by annual military and defense spending, which typically amounted to around 20 percent of GDP. The era of reform saw health spending more than double to 4.8 percent, which was a considerable improvement, even if it still fell far behind the rest of Southeast Asia.

A retired physician and senior health consultant who worked closely with the elected governments to construct the NHP, shared his concerns for the future of the country’s healthcare system. “Healthcare is in an immediate crisis,” he told The Diplomat, referring to the crippling economic effects of the country’s turmoil. “If the coup continues we are heading towards becoming a failed state.”

The consultant said that a key purpose of the NHP was to redress the disparities in the access to healthcare for rural communities, particularly those in ethnic minority states where civil conflict has been endemic. Creating an effective township health system has been paramount to overcoming the inequality of the current system.

“It has already been a complicated process to develop and decentralize our policies to reach the most impoverished communities, particularly in ethnic states,” said the consultant. “Since the coup, the military has increased its violence to these regions, leaving communities once again cut off from healthcare.”

NLD-led policies offered an opportunity to increase cooperation between the central state and ethnic armed groups in order to ensure that health services reach Myanmar’s most vulnerable populations. But the progress made in rural areas has been “halted under the regime,” he said, making particular reference to the fact that immunization programs have ceased since the coup. He said that this has been most prevalent in ethnic states where for decades communities have suffered heavily from preventable diseases, effects that have been exacerbated further by malnutrition, limited education, and poor sanitation.

The WHO has stated that Myanmar’s health system falls far short of the one doctor per 1,000 persons required to deliver basic healthcare to a given population. Furthermore, addressing the training and recruitment of medical professionals will be “essential” to improving the system.

In contrast to the shortage of doctors, struggling infrastructure and demands of a global pandemic, hundreds of health workers are facing charges for their opposition to totalitarian rule. If convicted under Article 505 of Myanmar’s colonial-era penal code, they face up to three years in prison, adding a further burden to a healthcare system already in crisis.

The Emergence of Civilian Resistance to Military Rule in Myanmar

In a matter of months, the People's Defense Forces have evolved from rag-tag groups into organized, and increasingly well-armed, military outfits.

COVID-19 vaccination efforts have become fatally entangled in the hostilities unleashed by the February coup.

As the country's crisis deepens, the lines between attack and defense are beginning to blur.

The armed group's decision to include Muslim Rohingya representatives in local administration marks a sharp break with a succession of central governments.

The efforts of Niwat Roykaew, known commonly as “Khru Ti,” were instrumental in halting a China-led channel deepening project.

If the nation is not admitted soon, it will fall further behind the 10 members of the Southeast Asian bloc.

The proclamation finalizes the return of the divisive Marcos clan to the heights of Philippine politics.