While India is combating a scathing wave of coronavirus infections that continues to wreak havoc on the citizenry of the country, the Ministry of Education seemed unperturbed by the ground reality of the mass destruction caused by the deadly virus. The ministry recently conducted a high-level “virtual meeting” with the education ministers and senior officials from various states to conduct “offline” school-leaving exams (board exams) for the students of Class 12 in the months of July and August. The meeting came at a time when an increasing number of reports are highlighting the vulnerability of children during the inevitable third wave of destruction by the coronavirus.

In protest, students wrote to the sitting chief justice of the Supreme Court of India, advocating for the cancellation of the examinations. Finally, on June 1, Prime Minister Narendra Modi announced that the Class 12 exams would be cancelled. “Students should not be forced to appear for exams in such a stressful situation,” Modi declared, acknowledging the intense anxiety students and their parents had felt about the prospect of sitting for in-person exams.

But it’s still worth asking why the Ministry of Education was even attempting to bring thousands of unvaccinated school students to examination centers when India is struggling with fast-spreading, deadly mutations of COVID-19.

The unparalleled devastation caused by the second wave can be observed from the government data, which shows that the highest number of cases recorded in most of the states during a seven-day period in 2021 is several times higher than the number of cases confirmed in any week of 2020 (See Figure 1). The state of Gujarat, saw an 800 percent increase between its highly weekly case count in 2021 (April 23 to April 29) in comparison to its 2020 counterpart (November 25 to December 1).

In some states, the curve is yet to bend as both cases and deaths continue to rise at an explosive pace. These numbers, based on official figures, are expected to be poor estimates of the ground reality. The real picture has been burning along with the many funeral pyres of those the country has lost. 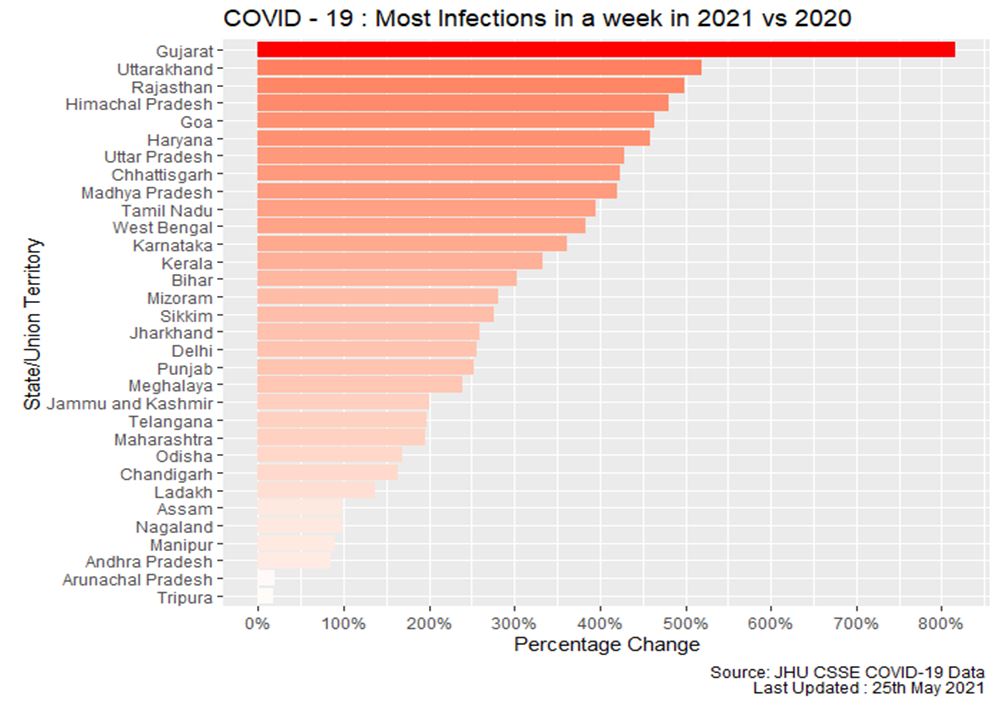 While people have already been scrambling for access to medical facilities across India, receiving a vaccine dose has also become a luxury in a country that was in fact touted as possibly the largest manufacturer of vaccines in the world. Only 12 percent of the total Indian population has received a first shot of the vaccine as of now and about 3 percent of the 1.3 billion population has received both doses.

Organizing in-person exams for millions of students can increase the possibility of super spreader events. Various international and domestic reports from 2020 and early 2021 suggest that the opening of schools and colleges for students led to incidents of outbreaks – not only among students but also the teachers and the school staff. By the end of March 2021, seven states in India had reported over 1,000 cases of COVID-19 infections from schools and colleges after they reopened for offline classes. Similar incidents were reported globally, including Israel where two symptomatic students were traced back to the infections of 153 students and 25 staff members in their school within 10 days of reopening the school. Australia also recorded an increase in the number of cases in school settings when there was an overall increase in the number of cases in the communities. The enhanced national surveillance data from the United Kingdom noted that for every five additional cases per 100,000 population in regional incidence, the risk of a school outbreak increased by 72 percent.

Class 12 comprises students aged 16-18, who may be at a higher risk of transmitting and contracting the virus in a school setting compared to students in elementary school. Studies conducted in Italy and Australia have shown a consistent pattern of higher number of cases in middle and high schools in comparison to elementary schools. Lax attitudes toward social distancing – a tendency to huddle with their friends and not follow the preventive measures – can be attributed as the reasons for increased risk in this age group.

A serosurvey conducted just before the onset of the second wave of the coronavirus found that the virus had impacted 25 percent of the children in the age group of 10-17. Although most of these cases were not severe, several incidents of pneumonia and multi-system inflammatory syndrome (MIS-C) were reported in children.

Considered as the “silent spreaders,” 90 percent of children develop an asymptomatic or a mild disease when infected with the coronavirus, thereby, making the adults around them more susceptible. Thus, offline examinations would put their families at risk. The situation becomes dire when the argument shifts towards the occupational risk of infection for teachers and school staff who will be responsible for conducting these exams.

The crisis brought about by the second wave in India has shown how quickly things change during a pandemic. In some states, the doubling rate of the number of cases has been less than a month – a typical school examination cycle. In the state of Uttarakhand for example, cases doubled in the state in a short span of 25 days from April 13 to May 8, officially adding more than 125,000 cases to its total. 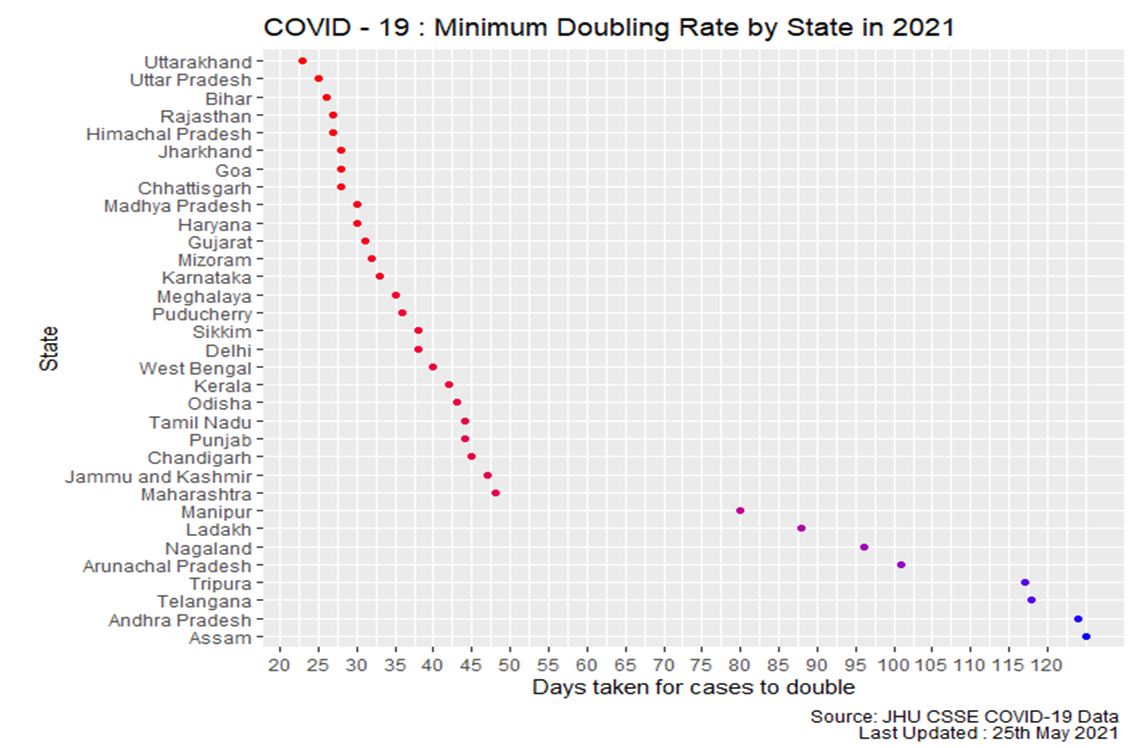 Given these circumstances, it’s astonishing that India’s  government was, just a few days ago, determined to push on with in-person exams, even given the low vaccination rate. The students themselves are entirely unvaccinated, as no vaccines have been approved for use in minors in India. Bharat Biotech and AstraZeneca, are the only two companies that have been permitted to conduct trials for their vaccinations in children in India. Worldwide, companies like Moderna and Pfizer have shown effective results of their vaccinations in children. However, these vaccinations have not been procured by the Indian government.

Education is one of the largest drivers of socioeconomic mobility in India but it cannot overshadow the right to life. The decision to cancel the exams will bring welcome relief to students, who had lived with the Sword of Damocles hangs over their heads since May.

The impacts of the pandemic on India’s youth threaten to last for years to come, undoing decades of progress on multiple fronts.

A WHO attempt to estimate India’s excess deaths during the pandemic sparked major backlash.

Schools Reopen in India Even as Another COVID Wave Looms

Reopening schools is necessary for poorer students who lack access to the internet.

India to Provide Free Vaccines to All in Major Policy Shift

Under the earlier policy, the federal government gave free shots only to people above 45 years of age and front-line workers.