Centered around the geography of Afro-Eurasia, China’s BRI is currently the largest geoeconomic initiative, involving 140 countries. It will be profoundly reconfigured by this war. For China, the vast Russian landmass was the most reliable land-route to the rich EU market. Russia, Ukraine, Poland, and Belarus had all hoped to be part of the New Eurasian Land Bridge, which is a mainly rail-based connectivity vision. These land connectivity dreams have been “killed” by Putin’s war. That’s a severe headache for China. 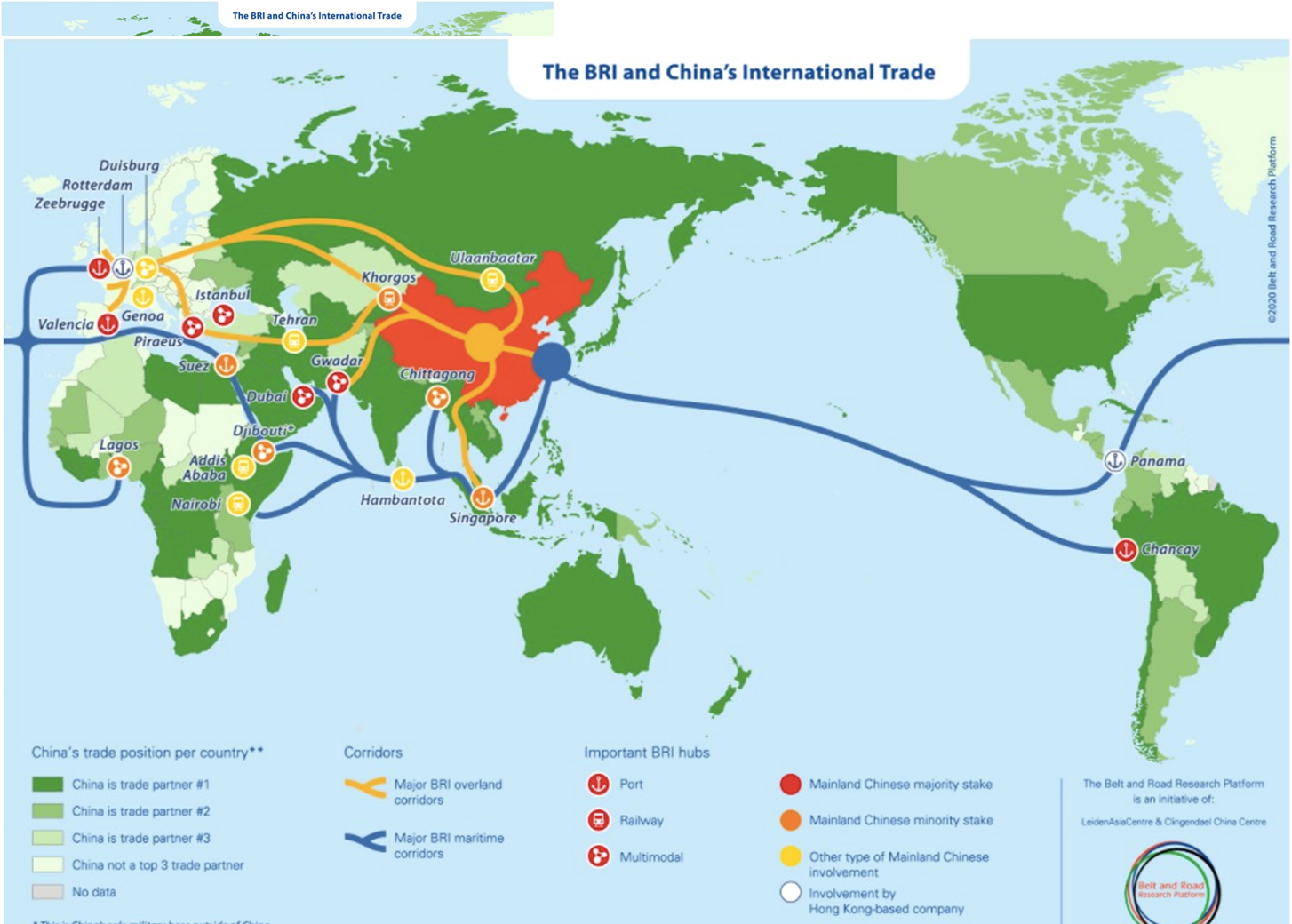 Graphic by the Belt and Road Research Platform, a joint collaboration between the LeidenAsiaCentre and the Clingendael China Centre.

The 17+1, which is a BRI cooperation platform between China (the “1”) and 17 (originally 16) Central and Eastern European countries, was already suffering setbacks due to Sino-American decoupling, among other reasons. The rapid Western-Russian/Belarusian decoupling and the destruction of Ukrainian infrastructure practically destroys any short- to medium-term prospects of a robust 17+1 platform – another problem for China.

In the short term, China has to go back to basics. China-EU connectivity will have to rely more on good old maritime routes, which have proved more resilient than road or rail networks. It is worth remembering that more than 80 percent of global commerce is still conducted via maritime routes. China’s enthusiasm for rail connectivity will have to be seriously curbed for now.

Beyond the short term, China must bypass the Russian-Belarusian and maybe Ukrainian geography. The BRI’s other corridors will inevitably gain more salience for China-EU connectivity. The Central Asia-West Asia (CAWA) corridor is likely to become more significant in Chinese thinking. By transiting via Central Asian countries, the Caspian region, Iran, and Turkey, the BRI can bypass Russia and reach Europe.

The potential reinstatement of the Iran Nuclear Deal and the recently signed Sino-Iranian 25-year agreement were already set to enhance the role of the CAWA corridor. Putin’s war is likely to turbocharge these processes and uplift the status of this corridor. The centrality of Iranian geography for China and the attractiveness of unsanctioned Iranian gas and oil for the EU – as an alternative to Russia’s – could boost the geoeconomic role of Iran in the current circumstances.

China’s other option is to rely further on the BRI’s China-Pakistan Economic Corridor (CPEC), which is connected to the Indian Ocean. It is also connected to Iran and Turkey (and by extension Europe) via road and rail (e.g., the Islamabad-Tehran-Istanbul train). China therefore has the option of further integrating CPEC and the CAWA corridor and solidifying China-Pakistan-Iran connections to reach Europe via land.

If both Russia and Iran are to be avoided, China’s BRI can be interlinked with Turkey’s Middle Corridor, a geoeconomic initiative that includes the Caspian region and Central Asian countries. Turkish policymakers have regularly promoted the potential synergies between their initiative and China’s BRI.

In the long term, Russia in its own turn is highly likely to further solidify its own geoeconomic initiative, the EAEU, to cement its influence in the former Soviet states as far as possible. The EAEU involves Russia, Belarus, Kazakhstan, Armenia, and Kyrgyzstan. These Russian partners are not likely to follow the sanctions regime. The EAEU will have to rely on a ruble-dominated trade regime. Russia is likely to push for a monetary union in this region, an idea that Putin, Belarus’ Alexander Lukashenko, and others have advocated for years.

The EAEU will also have to expand its cooperation and trade with whoever is still interested in dealing with Russia. Iran is one such option, given its own “pivot” to Asia under new President Ebrahim Raisi and a preferential trade agreement with the EAEU. The country hopes to turn this agreement into a free trade agreement. India, with its large economy and muted response to Putin’s aggression, is another. New Delhi already wants to benefit from discounted Russian oil and is looking for alternative payment methods to bypass Western sanctions against Russia even at the risk of being sidelined. The three countries meet in the International North-South Transport Corridor (INSTC), which they have been developing for two decades now.

An Iran eager for connectivity, a sanctioned Russia desperate for economic survival, and an India geographically surrounded by Pakistan and China – and therefore very eager for land connectivity to Eurasia through Iran’s Chabahar Port – will all be motivated to fast-track the INSTC’s development. This initiative also involves Central Asian countries, which aim to reach international waters via the Iranian landmass.

Through the multimodal INSTC, Russia can deepen its connectivity to the Caspian region, Middle East, Asia, and Africa. Many actors in these regions offered muted responses to Putin’s war, which means not all doors are closed to trading with Russia. The Gulf Cooperation Council offered one such response due to growing ties with Russia. A similar non-condemnation came from ASEAN, which has been eying a free trade agreement with the EAEU for years now.

In the short term, closer strategic proximity to China’s economic and financial institutions and services is the only immediately viable option for Russia to absorb the shock of the sanctions. After MasterCard and Visa left Russia, China’s UnionPay is set to replace them. This is only one sign of the “new era” agreement that China and Russia recently signed and promoted shortly before Russia invaded Ukraine. In the long run, Russia’s and the EAEU’s economic and geographic potentials are likely to be absorbed by China’s economy and the BRI’s geography. If left unaddressed, this unintended consequence of Russo-Western decoupling could become a serious strategic headache for the West in the long run.

And there’s the rub. China – and more broadly, East Asia – is the key to any strategic analysis of the current crisis in Europe. Namely, there is a global bifurcation between Western (particularly U.S.) geopolitical power and East Asian (particularly Chinese) geoeconomic power. The United States, EU, and allied policy responses to the Russian invasion should take this bifurcation into consideration so as to avoid or mitigate unintended negative consequences. Another layer of complexity to take into account is the distinction between economics (trade, finance, sanctions, etc.) and geoeconomics (economics plus geography).

Some commentators discount the size of the Russian economy as a tiny proportion (around 2 or 3 percent) of the global economy. However, they forget that Russian geoeconomic power is much more significant than its economy as such. Geoeconomics involves geography. One cannot outright discount Russia’s vast geography as a sizable portion of Eurasian (and global) landmass. It is easier to sanction economies than geographies. Geoeconomics is about long-term strategic thinking; sanctioning is a short-term tactical move. Sanctions are hurting Russia terribly now, but they don’t answer long-term strategic questions. They might even backfire as can be seen in the Sino-Saudi negotiations to replace the petro-dollar with the petro-yuan.

The grand policy (and analytical) paradox in the current crisis is this: On the one hand, Western powers consider China to be geopolitically their main systemic rival; on the other hand, they are completely detaching Russia from Western economies, finance, and geography, thereby forcing it to be incorporated into Chinese geoeconomics. This gives China an array of headaches in the short run –  some of them very severe indeed –  but does it not make China more of a formidable rival for the West in the Indo-Pacific in the long run, when China will have absorbed – at a discounted price – most of the Russian geographic and economic strengths?

The distinction between economics and geoeconomics is most often ignored in Western policy circles. The four Western-oriented infrastructure initiatives, namely, the EU’s Global Gateway, the United States’ BDN, Japan’s QII, or the G-7’s B3W have not yet produced enough geoeconomic momentum globally to seriously rival the BRI. The U.S. and EU ignore geoeconomics at their own peril. After all, the West won the Cold War through geoeconomic means, such as the Marshall Plan and the Breton Woods institutions.

One way forward is to reenergize these four initiatives, create serious synergies between them, and bring them under one coherent strategic narrative to compete with the BRI. This narrative has to be as multidimensional as it gets (as the BRI is) and should not reduce all complexities of international affairs to a one-dimensional ideological narrative about the battle between democracy and authoritarianism. That can be one part of the story, but not the whole story. Such one-dimensionality would cost the West many potential allies and partners.

The combination of these initiatives is especially needed if Russia’s (and the EAEU’s) geoeconomics is going to be combined with China’s BRI as an unintended consequence of the Western decoupling from Russia. It is at such critical junctures in history that strategic long-term decisions can make or break an actor or even a system.

Beijing has avoided violating sanctions, but its purchases of Russian oil and gas rose almost 60 percent in August over a year ago.

What Does Russia’s Invasion of Ukraine Mean for China in the Arctic?

An exodus of money, technology, and buyers from Russian energy projects may offer an opportunity for China to embed itself deeper in the Arctic.