There is a Japanese word meaning “half men,” a derogatory term that was coined at the end of the 19th century. The term is now only used disparagingly to describe ethnic Koreans. TV, radio, and newspapers have all banned it, but it persists in the ears of the general public by making an unpleasant amount of social media appearances, especially in the past few years, likely in response to the tense diplomatic relations between the two countries.

In 2019, as tensions between Japan and Korea increased, Kawasaki, which is home to one of the largest Korean communities in the greater Tokyo area, enacted the first law against hate speech in Japan, with repeat offenses subject to a fine of up to 500,000 yen ($4,000). Prohibited actions listed include promoting physical assaults on minorities, seeking to have minorities evicted from their homes, and referring to them in a derogatory manner.

To understand why this type of legislation is necessary, we need to go to Shin-Okubo, the little Korea in Tokyo.

“Kaere!” go home. That’s what Na, a 24-year-old from Busan who now works at a fast-food shop in Shin-Okubo, is often told when she is overheard talking in her native Korean.

“They targeted my appearance and made fun of my use of Japanese, as I was still not fluent at the time,” Na recalled.

But the stifled resentment against ethnic Koreans doesn’t detonate only at the hearing of the “wrong” accent. There is a troubling tendency to lay blame on Koreans for nearly any misfortune that befalls Japan. After the 500-year-old Shuri castle in Okinawa caught on fire in 2019, fake news began circulating on the web that the fire was an arson attack perpetrated by Koreans residing in Japan. The origin of the disinformation remains unknown.

Earlier this summer, in the immediate aftermath of former Prime Minister Abe Shinzo’s assassination in broad daylight on July 8, baseless rumors began flying online that his killer was an ethnic Korean who hated Japan. South Korea’s consulate in Fukuoka reportedly warned that Koreans living in Japan might become the victims of violence as a response to the misinformation.

Just recently a Japanese court sentenced to four years in prison a 23-year-old man who had set fire to empty houses in a neighborhood populated by Korean residents in Kyoto prefecture. 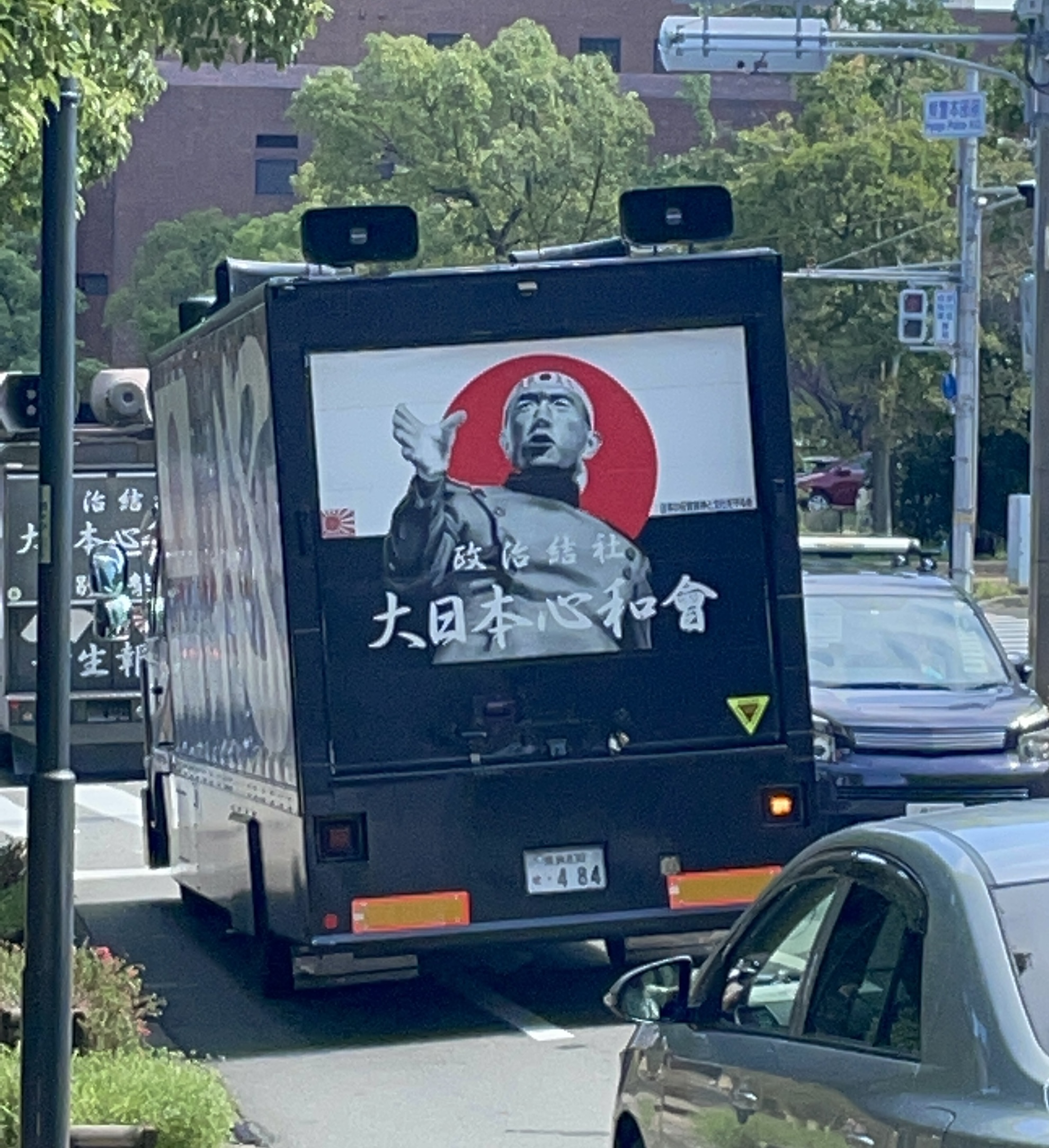 Perhaps no issue evokes stronger emotions on both sides than the “comfort women” question. The euphemism refers to those Koreans, Chinese, Filipinos, Taiwanese, and others who were forced into prostitution for the Japanese military during World War II.

Hyun, 38, is the Korean manager of a Family Mart (the widespread Japanese convenience store chain). “Sure, Japan has apologized for its crimes by compensating the victims. But many Koreans don’t feel is enough,” he claims.

That may be because it is common to hear Japanese disparage the victims even today. Mao, a 22-year-old student who was born in Japan to Korean parents pointed out that ethnic discrimination seeps even into the classroom. “I had a lecturer at the university who once said aloud that Korean women have considerably more sex appeal than the Japanese… The fact that they chose to become comfort women in the past is actually no coincidence.”

In the ad, Iris Apfel, a 98-year-old businesswoman and fashion icon, responded, “I can’t remember that far back!” when asked what she wore as a young woman. Koreans claimed this was a hidden message about historical amnesia – specifically toward Japanese colonial rule on the Korean Peninsula. Koreans started a boycott, leading Uniqlo’s sales in South Korea to drop by over 60 percent.

The historical struggle over comfort women broke out once again in January 2021 after the Seoul Central District Court ordered Japan to compensate each of the 12 Korean “comfort women” who sued Tokyo in 2016, with 100 million Korean won (about $82,000). However, Japan appealed the decision based on the principle of sovereign immunity. The court decision, following on the heels of a separate decision awarding compensation to Koreans forced into labor during World War II, is at the center of recent tensions between South Korea and Japan.

Japan and South Korea came to an agreement in 1965 whereby the former would have given Seoul $500 million, 1.6 times the Korean budget at the time, in exchange for settling once and for all the historical disputes between the two nations. Tokyo maintains that any other claims to compensation are null and void, while Korean courts have ruled that individuals – as opposed to the South Korean government – are still free to pursue legal redress.

The fraught emotions underneath the dispute are driving controversy around a recent art exhibition.

The “Non-Freedom of Expression Exhibition,” organized by a citizen’s group, features about 60 pieces by 16 artists. It traveled all over Japan starting in 2019, despite being repeatedly forced to close or cancel showings due to protests and threats. This year the exhibit has opened again in Aichi, Tokyo, Kyoto, Osaka, and Kobe.

Included in this exhibition are exposed photographs of former wartime comfort women and one statue representing them: the so-called heiwa no shoujo zo, the Statue of Peace. The first version of the Statue of Peace was initially built in Seoul in 2011 in front of the Japanese Embassy in order to pressure the Japanese government to express regret to the victims of sexual slavery. 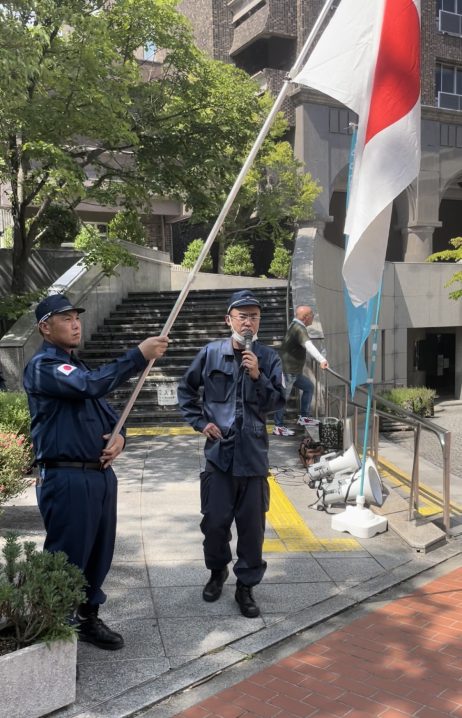 Members of a right-wing group protest against the “Non-Freedom of Expression Exhibition.” Photo by Cristian Martini Grimaldi.

The Non-Freedom of Expression Exhibition, which was a part of the 2019 Aichi Triennale art festival, has been received with protests from those opposed to the historical perspective that the art installations convey.

Yamashita Shunsuke is the head and founder of the nationalist party Okirukai (“waking Japan up”), whose purpose is, in the words of Yamashita himself, to place importance on the figure of the Emperor.

“If you look at those exhibit you can see that they are disparaging the Emperor himself. Nobody has that right!” he said when I met him in Kobe during a protest. He had just given a speech to a small crowd of supporters.

“If you go on YouTube you can see one artwork of this exhibition, it is a video showing a photograph of Emperor Hirohito being burned and stepped on,” he said.

To prevent the exhibition from taking place, different far-right groups and nationalists gathered to protest in front of the Hyogo prefecture government building.

One woman holds a sign that reads “Stop the hate against Japanese! We will not allow you to act against Japan!”

“This is an exhibition from the ‘anti Imperial system group,’ a far-left association,” she said. Finding the names of the actual organizers of the exhibition is very hard if not impossible, even with a refined online search – something the woman disparagingly called “a very Korean way of doing it things, they hide behind a screen.”

Downtown in the cities where the exhibition took place a long caravan of white, gray, and black vans with the flags of the Imperial Army displayed on both sides took part in a demonstration. The vehicles are often decorated with images of author Yukio Mishima, taken as the symbol of the far-right groups, and the imperial family emblem displayed on flags.

During one protest I attended in Kobe, the minivans of the far-right groups poured into the streets, playing nostalgic military marches. One of the vans has a long call-to-war-action line on its side: “It is the true desire of us men to give our lives for serving our country.” 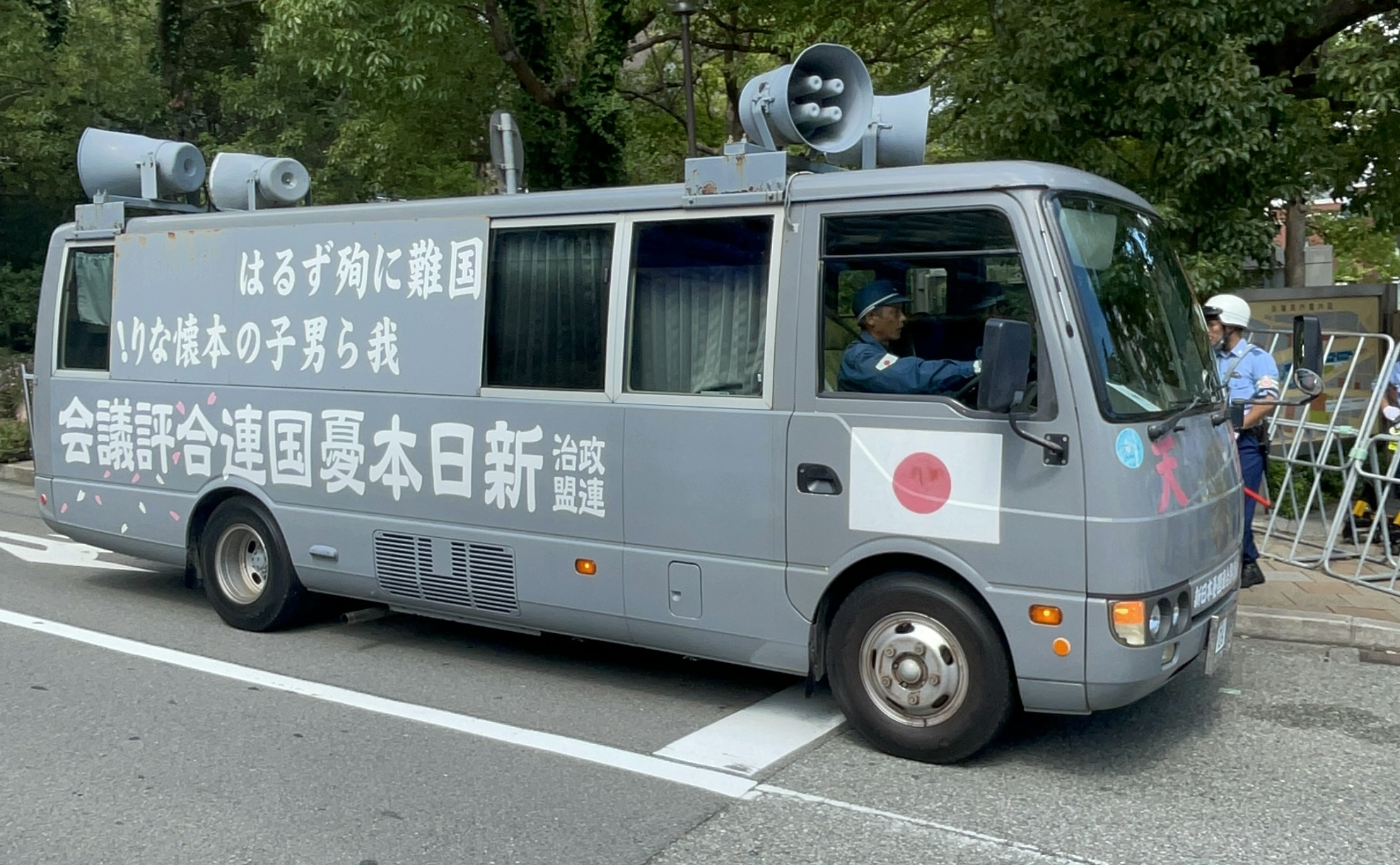 Their intent is loud and clear, as it is not just spoken but yelled out of the huge speakers placed on top of the vans: Haji wo shire! (“Shame on you” – for accepting the exhibition), Dete ike! (“Get out” – of Japan), and Funsaiseyo! (“Let’s destroy” – presumably the exhibition).

The ultra-nationalist group, which goes by the name zaitokukai, spreads the slogan of “Tottoto kuni ni kaette kudasai” or “go home in a hurry!” To understand who they are targeting, we simply have to decode their name: Zaitokukai is shorthand for “Citizens against the privileges of the Zainichi,” or ethnic Koreans living in Japan.

For many Koreans in Japan, the details of past financial settlements mean nothing. More important are their daily lived experiences as targets of bullying and anti-Korean slurs.

What Will Japan’s Great Reopening Mean for Immigration Policy?

During the pandemic, Japan showed itself to be extremely skeptical toward foreigners, raising questions about the country’s immigration policy going forward.

How Japan Got the Pandemic Right – and Wrong

By Trevor Incerti and Hikaru Yamagishi

As Japan reopens, a look back at its handling of the COVID-19 pandemic from the beginning.