Peter Maguire is an American academic best known for his work on war crimes and the Khmer Rouge tribunal in Cambodia – a stark contrast to the surfing and drug smuggling days of the 1960s, 70s and 80s. Those dangerous decades provide a rich tapestry for his latest work: Thai Stick – Surfers, Scammers and the Untold Story of the Marijuana Trade.

The Southeast Asian drug industry thrived on the antics of young surfers from California, Hawaii, Australia and elsewhere – who dreamed of perfect waves in exotic locations with access to cheap pot and easy money. Smuggling on the high seas would become a way of life. Maguire, a co-author of Thai Stick, spoke with Luke Hunt, The Diplomat’s Southeast Asia Correspondent.

You successfully captured the innocence of an era. Pot was never considered a dangerous drug and it always seemed to marry well with the culture of surfing. What changed this by the 1980s? Was it big business and the mafia moving into drugs? The Vietnam War? The War on Drugs?

The Reagan administration reinvigorated the War on Drugs in the early 1980s and marijuana went from almost legal to very criminal. That is very ironic because Reagan claimed to be a libertarian and free marketer – according to that ideology individual rights are sacrosanct, not to mention free markets. Adam Smith was rolling in his grave; there is absolutely nothing conservative about legislating morality.

The renewed war on pot proved to be yet another pyrrhic victory in the war on drugs. Although the U.S. government shut down the Thai marijuana trade, what did they actually win? There was no reduction in either the supply of or the demand for marijuana; in fact, quite the opposite. By the mid-1980s, marijuana was the number one cash crop in the United States thanks to huge demand and an artificially high price. As everyone from economist Adam Smith to the Thai politicians who were pressed by the U.S. government to crack down on pot have pointed out, political laws will always be less powerful than the economic law of supply and demand.

Not only did the price of this easily cultivated weed go through the roof, while law enforcement was playing cat and mouse games with non violent pot growers, America was flooded with cocaine and its evil twin, crack.

What type of feedback have you received from those who made a living out of drug smuggling and the people assigned to catch them?

By far the most amazing thing has been the number of aging surfer smugglers who have came out of the woodwork to embrace our book. One major smuggler showed up at a book signing in California. He spent 14 years in both Thai and American prisons and although he did not want to be interviewed, he came to shake our hands and tell us that he thought the book was fair and accurate. Although we respectfully disagree on the dangers of marijuana, the retired DEA agents we interviewed thought the book also thought it was fair and  concede that compared to meth and cocaine, the Thai marijuana trade looks positively innocent.

How would you characterize your relationship with Mike Ritter? He is in the unusual position of being a friend, co-author and a major subject of the book.

My relationship with Mike Ritter was always good but grew into one of absolute trust after he was indicted. After he went to prison and sent me all of his research, I found out just how amazing a researcher he was. We never differed on the book’s content, we never wanted to pander to the whims of Hollywood or commercial publishers. We both wanted to write a serious, scholarly history of the marijuana trade that would meet the same rigorous standards as my previous books and that is why we chose Columbia University Press. They did a great job. 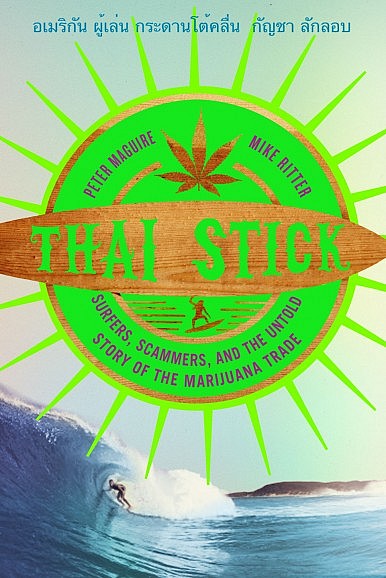 Given the nature of drug smuggling how difficult was it to win the confidence of the smugglers while researching Thai Stick?

While the smugglers we interviewed were coy at first, many were Ritter’s former co-conspirators so they had already established trust. The interview process was cathartic for men who had led secret lives and could finally talk. That trust was extended to me after Ritter went to prison and I halted the project until he was released. I could have easily thrown him under the bus like so many other others did.

You are also a big wave surfer and have enjoyed the odd smoke yourself; what are your favorite memories of living what many still see as an idyllic lifestyle?

My best surfing memories would have to be my early years as a carefree and clueless teen – Malibu, Rincon, the Ranch, Baja, Oahu’s North Shore, Australia, Micronesia, Fiji, French Polynesia, I surfed all of them before the age of 20 – those were very special places at very special times. The friends I made during those years remain friends to this day. As I wrote in the book, unlike my friends who grew up on the east coast, the Pacific Ocean, our frontier, was alive and well.

Your final conclusion was honest and to the point. What message does Thai Stick send to the Drug Enforcement Agency and the American War on Drugs?

American law enforcement is basically in the same place the U.S. military was in Vietnam during the early 1970s. They have conceded defeat in the war on pot and they are now looking for a face-saving way out. However, there is none as it was a massive waste of time and resources. Today pot is basically legal in California and the marijuana industry is growing more quickly than even the tech sector. I have no problem with the DEA as they are foot soldiers following orders. The real problems are our spineless politicians, America is drowning in contradictions and some of the worst ones stem from the War on Drugs – whether it is the pot-smoking president who refuses to take a decisive position on legalization, or the coke-sniffing Republican who cries “rehab” when busted.

Irrespective of the fact that today America is led by a president who was once a habitual pot smoker, his DEA head administrator refused to admit that heroin and methamphetamines were worse for a user’s health than marijuana. If a teenage, black crack dealer gets caught with a hand full of rocks, he will almost certainly do hard time in a state prison, but when banks like Wachovia are caught red handed laundering the Mexican cocaine cartel’s blood-stained millions, if not billions, as they were in 2008, they simply pay a fine – less than 3.0 percent of their annual profit. Today America has the largest prison population in the world and the nation is more drug-addled than ever. America has lost the War on Drugs. Today, by far the most drug-related deaths, more than heroin and crack combined, are a result of synthetic opiate abuse. Yet when an outspoken War on Drugs advocate like Rush Limbaugh is caught with 2000 synthetic opiate pills prescribed by four different doctors in less than six months, the contradiction is lost on America’s numb body politic.

Among your previous books is Law and War, which a decade ago was a timely and fortuitous read given the advent of the Khmer Rouge tribunal in Cambodia for which there has been no shortage of critics. Has your opinion of the trial altered over the years? What do you make of the tribunal now?

The Cambodian tribunal deserves a pat on the head and a kick in the ass. I have great respect for the UN and Cambodian staffers in Phnom Penh who have kept the ECCC from turning into a complete farce. However, the UN brass in New York and the new heralds of the human rights industry deserve a kick in the ass. Not only did they refuse to accept the limits of the possible, they freighted the ECCC with a promises of a therapeutic legalist transformation; hence the absurdly over-complicated tribunal structure.

Finally, are you working on any other book projects at the moment?

Thai Stick Part 2, a book on post 9/11 America called the Land of the Fat, Home of the Scared, and another about my experiences working as a defense contractor in the military industrial complex.

Nate Thayer, Dead at 62, and Stories That Still Resonate

Among his many scoops, Thayer's work also foreshadowed the rapid growth of Chinese influence in Cambodia.

The ECCC delivers its final verdict with closure on the horizon.

The Cambodian leader's recent trip to Myanmar recalled the negotiations aimed at resolving his own country's conflict in the late 1980s.

The Paris Peace Agreements did not end the war in Cambodia.