Russia has its problems, but they don’t include a negative population growth rate — contrary to common wisdom. Following the collapse of the Soviet Union, birth rates among native Russians tanked and death rates began slowly climbing. Around 1992, deaths in Russia exceeded births. Analysts of Russian affairs have ever since taken it for granted that Russia faces a demographic crisis that will slowly but surely thrust the country into a perilous state of affairs where its economy shrinks as population declines (Western sanctions over Crimea are a drop in the bucket in this picture). The only problem with this hypothesis is that, while it was true for a majority of the 1990s and the early 2000s, the most recent data suggest that the trend has started reversing and Russia is headed towards positive population growth, with more births than deaths.

First, the data (from the World Bank): 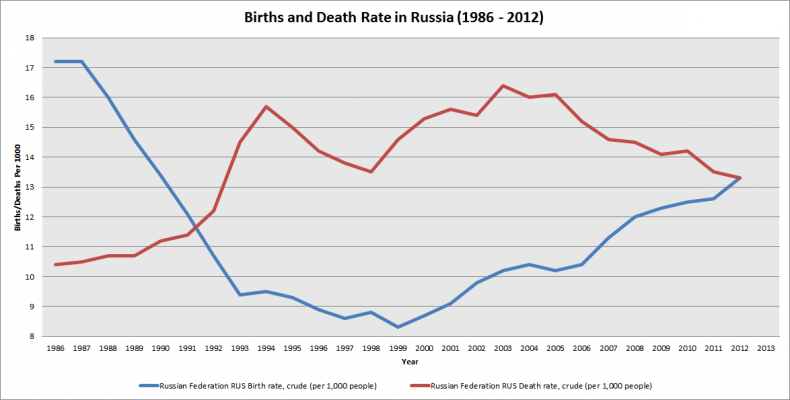 The World Bank’s data up to 2012 demonstrates pretty clearly that despite the catastrophic fall in population in the early 1990s (forming the infamous “Russian Cross”), birth rates and death rates in Russia have been steadily converging. A more up-to-date analysis by Mark Adomanis over at Forbes, using official data from Rosstat, shows that in 2013 and 2014, Russia incontrovertibly had more births than deaths.

We don’t know for sure yet that Russia, as it exists after the fall of the Soviet Union, will be free from the demographic and public health factors that caused the catastrophic fall in population. These factors include a spike in the consumption of drugs and alcohol; Douglas W. Blum, in his book Russia and Globalization: Identity, Security, and Society in an Era of Change, estimates that “alcohol alone caused the deaths of roughly 7 million people” in the years between 1990 to 2001. Blum also notes that during that same era 5 percent of Russia’s youth were “doomed to die at an early age due to opiate- and ephedrine-based drug use.” Both of these factors affect males more than females and in turn depressed Russia’s birth rate. Blum concludes that “in sum, hard liquor and drugs constitute real threats to national security.” Despite what the data are showing above, the alcoholism rampant in Russian society hasn’t changed as of 2014 in any significant way.

Part of what has also assisted in Russia’s population recovery (though not entirely reflected in the chart above measuring births and deaths) is its significant appeal as a target for immigrants from former Soviet states, particularly in Central Asia. Russia hosts the world’s largest population of immigrants after the United States. While immigration is a hotly debated issue in Russian politics, and xenophobia is rampant among the more conservative of Russia’s majority East Slavic ethnic groups, immigrants nonetheless make their way to Russia in search of a better life. “Most of those people have integrated in our society and contribute to Russia’s economy. Experts estimate that Russia has a demand for more such people,” notes a spokesperson for Russia’s Federal Migration Service (FMS).

I should note that, despite a rosier picture for Russia’s demographic situation, I don’t disagree that a host of problems, including an over-reliance on energy exports and weaponry, imperil Russia’s future on the world stage. Furthermore, the scope of problems facing the Russian state and society are massive. In this sense, the Western response over Putin’s annexation of Crimea and continued coercive behavior on Ukraine’s eastern front are small, short-term issues.

For all its imminent geopolitical and economic challenges, Russia does have some population growth to look forward to. Demographically, public health issues, an aging population, and a poor social security apparatus might imperil population growth once again, but in the meantime, the oft-quoted truism that Russia is shrinking simply isn’t empirically true. In fact, Russia’s population growth, if sustained, could lessen the pain of the austerity that almost certainly lies in the future for its elderly. Regardless, either Putin or his successor will recognize that Russia’s lopsided population pyramid will grow as a problem. Future population decline is likely for Russia, but for the moment, its population is growing ever so slowly.

Instead of lecturing India, the West should take India’s interests seriously and make better offers to New Delhi than Moscow does.

Avoiding a New Cold War: The World Needs a Wind of Change

Why re-establishing lost trust between Russia and the West is more important than ever.

The SCO is not a platform for harmony or discord per se, rather it is what the members make of it.

Uzbekistan Does Not Drift Among Great Powers

Tashkent’s engagement with Washington doesn’t undercut its relations with Moscow and Beijing.