Democracy has taken many knocks in recent years. Russian President Vladimir Putin has twisted a supposed Russian democracy into a dictatorship. Beijing is touting its single-party autocracy as superior to democracy. And in Washington, democracy looks like a legislative train wreck. But the island nation of Sri Lanka this past week proved that democracy is alive and well in at least one corner of the world, by throwing out its own Putinesque figure.

On January 8, a diverse coalition of Sri Lankan parties led by Maithripala Sirisena defeated Mahinda Rajapaksa, president since 2005, who was seeking to secure a third six-year term. Rajapaksa, whose administration in 2009 finally crushed a longstanding Tamil separatist movement in the country’s northeast, presented himself as a god-like figure and set about placing numerous relatives in key government posts, making national politics something of a family business. When the chief justice of the Supreme Court made decisions contrary to his family’s liking, Rajapaksa simply sacked her. He had a promising rival, military commander Sarath Fonseka, jailed. He ordered up a massive new port to be built in his small hometown of Hambantota, on the southern coast of the island – and named it after himself. In Hambantota, he constructed a multi-hundred-million-dollar “international” airport that sits mostly empty, hosting just two to four flights per day. He named this after himself, too. 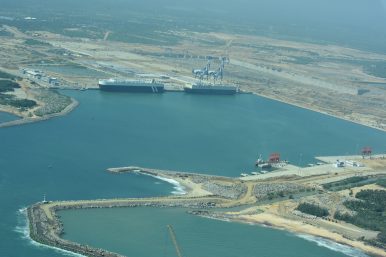 Who provided the billions of dollars of loans for these projects, as well as for an ongoing colossal landfill “port city” at Sri Lanka’s capital, Colombo? China’s government – through its export-import banking arm, with all construction mandated to Chinese state-controlled companies, with no competitive bidding, and with no public accounting of the economics involved.

The southern coast of Sri Lanka is ten nautical miles from the main sea lane linking East Asia to the Middle East, Africa and Europe. That includes the corridor for China’s oil and gas shipments from the Persian Gulf. Beijing’s interest in Sri Lanka’s strategic location is by no means strictly commercial; twice in 2014, Chinese submarines for the first time ever docked in Sri Lanka, at the newly Chinese-built and -operated south port of Colombo harbor. At the other new port, Hambantota, which is also controlled and operated by a Chinese state-owned company, four of seven large berths are exclusively reserved for Chinese vessels for 35 years, according to Phoenix News in Hong Kong. There are no disclosed restrictions on Chinese naval use of the berths.

There has been rampant speculation in Sri Lanka that the non-transparent construction projects funded by China have enriched the Rajapaksa family at the expense of other citizens. The new president’s prime minister declared in December that he would scrap entirely the $1.5 billion port city project at Colombo, now being built by China Communications Construction Company. The new president, Sirisena, formerly a minister in the Rajapaksa government, called during the campaign for his fellow citizens to join him “to free the country from corrupt practices and family rule,” and his campaign manifesto contained a thinly veiled reference to China: “The land that the White Man took over by means of military strength is now being obtained by foreigners by paying ransom to a handful of persons. This robbery is taking place before everybody in broad daylight.”

China was the main supplier of arms, including vital fighter jets, radar and munitions, to Rajapaksa’s regime in the ramp-up of its destruction of the Tamil resistance and alleged massacre of tens of thousands of civilians in 2008-9. China, in its position on the UN Security Council, has repeatedly protected Rajapaksa from possible UN war crime investigations (sometimes with help from Russia and Venezuela). While in office, Rajapaksa intimidated the press, used the powers of the state and its media for personal propaganda, blocked Internet news sources he found objectionable, repressed minority groups, and, as candidate Sirisena observed in November, was moving toward a dictatorship. In other words, Rajapaksa was the Chinese Communist Party’s kind of man.

And yet, despite all the levers of incumbent power, the state-funded bribery of the electorate, the manipulation of government-owned media, and cronies who shot organizers at opposition rallies, Rajapaksa lost.

And, despite possible dangers in going to the polls, voter turnout for the election was estimated at 81.5 percent, an inspirational level when compared to the U.S. turnout of 54.9 percent in its most recent presidential election. 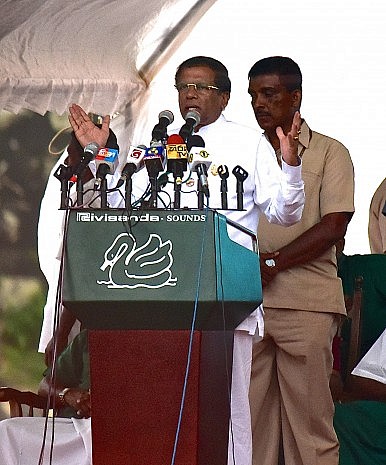 
At a political rally for the opposition in the southern city of Galle, on the last day of campaigning (January 5), a crowd of thousands stood for more than four hours in an often scorching sun to hear out several opposition speakers, including Sirisena, who took his oath of presidential office on January 10. The jam-packed crowd at the campaign rally was orderly and polite, paying attention to every word from the podium. Intermittently they broke into cheers and waved flags, but always returned to listening intently. There were no refreshments being served, no one smoked or drank; many people stood on plastic chairs or climbed into trees to get a better view and wave their flags. Watchful police officers were present in abundance as well as a few army troops, but despite being under the official control of the Rajapaksa family, they appeared even-handed and reserved.

The majority of Sri Lankans at this rally and elsewhere in the country were fed up with a corrupt regime that allegedly profited from white-elephant projects, and, perhaps more persuasively, the voters had become alarmed as the cost of basic foods like rice, dhal, and flour had risen to unbearable levels while incomes stagnated.

Widespread fears that Rajapaksa would stage a military coup if he failed to win the election appeared to be unfounded, as he conceded defeat the following day. However, yesterday (January 11) a senior aide to Sirisena told reporters, “People think it was a peaceful transition. It was anything but.”

The aide, Mangala Samaraweera, said that when the ballot appeared to be going against him, Rajapaksa ordered a meeting with the nation’s attorney general and heads of the army and police to implement a state of emergency and abort the election. Army Chief Lt. Gen. Daya Ratnayake reportedly refused, and Rajapaksa’s plot fizzled. India’s newspaper The Hindu reported that when it contacted Army Chief Ratnayake he declined to comment on whether there had been a coup attempt. In any case it appears democracy was not thwarted by a dictator this time.

There is of course a risk that the new leaders of this country of 21 million will become venal and self-serving, or that the newly governing coalition of disparate parties will crumble into disarray. The future of Sri Lanka is uncertain. But for now it is in the hands of the voters, who were brave, on all sides – something that is antithetical to the former president’s patron, Beijing.

Any optimism felt by the country’s beleaguered minorities remains tempered.

By Nitin A. Gokhale

India has ceded influence in Sri Lanka to China. Could the upcoming election change that?