The deadline for prospective founding members to submit their applications to China’s new Asian Infrastructure Investment Bank (AIIB) came on March 31, leading a flurry of final applications from countries all over the world. When the dust settled, China moved on to selecting who would actually made the cut. Yesterday, the AIIB released its final, approved list of founding members (excluding Taiwan). With 57 countries signed up, the AIIB includes well over a quarter of the world’s nations. Even more interestingly, 16 of the world’s 20 largest economies are on board (with the U.S., Japan, Mexico, and Canada as the holdouts).

So which countries will be joining the AIIB? Here’s a map based on the list of prospective founding members found on AIIB’s official website: 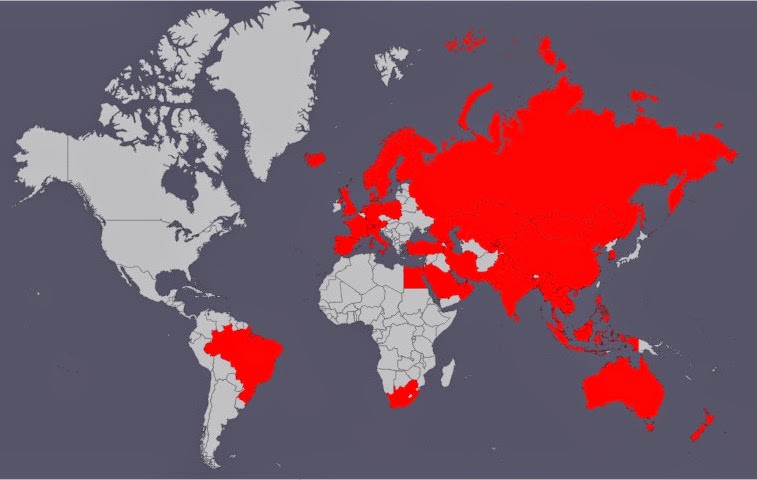 For one thing, Japan is nearly alone in Asia in not joining the AIIB. It’s the only major economy in all of Asia not to seek membership (Taiwan, as noted above, applied and was turned down, but will still seek to join later as an ordinary member). Looking at the other non-AIIB members in Asia – three are currently dealing with major uprisings (Iraq, Syria, and Yemen), one (Afghanistan) is undergoing its own fragile rebuilding process, one (Turkmenistan) avoids multilateral entanglements on principle, and one (North Korea) is extremely isolated internationally. Three of the other Asian non-applicants rank 116th (Papua New Guinea), 168th (Bhutan), and 174th (Timor-Leste) in terms of GDP, according to the World Bank. That’s not exactly great company for Japan. Even North Korea reportedly sought membership but was told it would need far more economic transparency to join.

The AIIB also has great representation in Europe. Nearly all of Western Europe (save Belgium and Ireland) officially signed up for the new bank. It’s a different story in Eastern Europe, where countries generally don’t have the excess capital to invest in an extra-regional bank (and thus Eastern European countries are not involved with the Asian Development Bank either). Meanwhile, the interest in AIIB from Western Europe marks a stark contrast between that region and North America. The U.S., Canada, and Mexico all declined to sign on, with Washington being particularly critical of the new project (including pressuring its friends and allies not to join).

However, the glut of Western European countries involved in AIIB doesn’t mean Europe will be able to play a major role in the bank’s governance. The AIIB’s chief, Jin Liqun, previously said that non-Asian countries will be limited to holding a total of 25 percent of AIIB shares. That means China can claim all of the prestige of having Western Europe join its new pet project without actually have to share control.

It also means that Asian countries with governance concerns (including Australia and South Korea) will have to be more vocal about these issues to ensure AIIB actually lives up to international standards. China has announced that negotiations over the AIIB charter will take place in April and May, with the signing of the charter scheduled for the end of June.

One other intriguing point: All of the BRICS nations – Brazil, Russia, India, China, and South Africa – are on board. That means double duty for these countries, as they are also in the midst of getting the new BRICS Development Bank (formally launched last July) up and running.

The US Should Make Sure China's AIIB Succeeds

The AIIB faces three possible fates -- and it's in the United States' interests to make sure it succeeds.

Beijing denies Taiwan's application to be an AIIB founding member, but holds the door open for ordinary membership.

Chinese Foreign Aid in East Asia During the Trump Era

Can China finally surpass the United States as the top aid donor in East Asia?

China's AIIB Is About to Face 2 Major Tests

The bank’s directors will vote on a new energy sector strategy and a risky financing model.