A 65,000 ton, Danish-owned, Singapore-chartered, container ship, en route to the United Arab Emirates from Saudi Arabia, manned mostly by Eastern European and Asian sailors, is intercepted, boarded, and confiscated by the Iranian navy, prompting a U.S. destroyer to investigate.*

That wasn’t an anecdote from Tom Friedman’s next book on globalization–it’s a rough description of what took place on Tuesday, April 28, in the strategically important sea lanes of the Strait of Hormuz.

Allow me to get into the details:

The shipping lanes in the Strait of Hormuz have long been highlighted as a potential flashpoint amid the simmering geopolitical tensions between the United States and Iran. Its waters are of particular geostrategic significance given that over a third of the world’s petroleum traded by sea passes through the region. Iran has repeatedly emphasized its dominance over the waters, threatening to blockade the strait in a time of crisis. Today, we saw an acute manifestation of Iran’s audacity when the Iranian Revolutionary Guard Corps Navy (IRGCN) seized and escorted the Marshall Islands-flagged MV Maersk Tigris, a shipping vessel belonging to Denmark’s A.P. Moller–Maersk Group and chartered by Singapore-based Rickmers Shipmanagement, toward the Iranian port at Bandar Abbas. The incident sparked a response by U.S. Naval Forces Central Command (NAVCENT), which ordered the USS Farragut, an Arleigh Burke-class destroyer that was 60 miles from the point of the Tigris’ interception, to respond to the vessel’s distress signal. The incident took place as Iran’s foreign minister, Mohammad Javad Zarif led a delegation to New York City for the Nuclear Non-Proliferation Treaty review conference at the United Nations, meeting with Western diplomats on the sidelines to discuss the ongoing P5+1 talks over his country’s nuclear program. 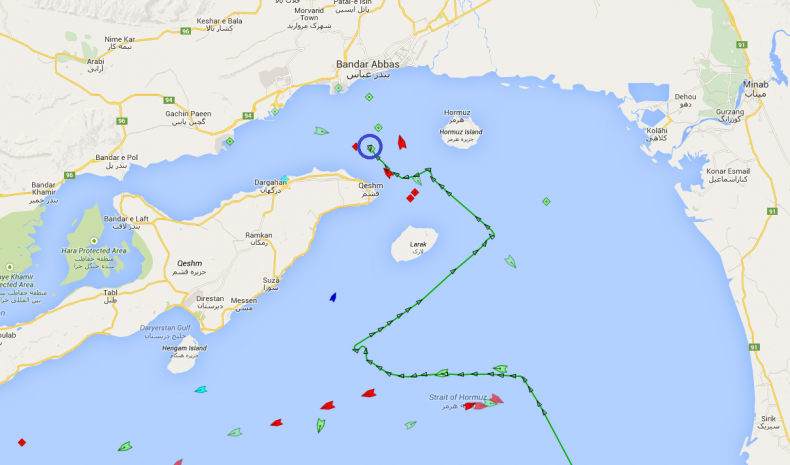 Map depicting the MV Maersk Tigris’ original path toward the UAE and diversion after being intercepted by the IRGCN. (Source: marinetraffic.com)

Saudi Arabia-backed, UAE-based Al Arabiya was among the first sources to break the news in English. It reported that Iran had fired warning shots (true) and seized a U.S.-flagged vessel (false). Nevertheless, the initial reports sparked considerable online panic at the prospect that the United States and Iran could be headed for a major confrontation. The report also noted that the crew of the ship numbered 34 and were American. Needless to say, U.S. citizens being held against their will by Iran hits a raw nerve for the United States given certain historical events. We’ve since learned, thanks to Reuters, that the Tigris’ has a crew of 24, most of whom hail “from Eastern Europe and Asia.” In the process of the seizure, the IRGCN fired across the bow of the ship. Pentagon spokesman Colonel Steve Warren told CNN that “the master was contacted and directed to proceed further into Iranian territorial waters. He declined and one of the IRGCN craft fired shots across the bridge of the Maersk Tigris.”

Iran’s reasons for seizing the ship were at first unclear. Speculation abounded that the incident was a show of force intended to strike back at the United States after it sent the USS Theodore Roosevelt (CVN-71) to intercept an Iranian arms shipment to Yemen’s Houthis last week. Additionally, others suggested that the seizure could have been a move by hardliners opposing Iran’s negotiations with the West over its nuclear program  –  an attempt to spark a broader crisis to derail those talks. Reza Marashi, research director of the National Iranian American Council, told The Hill that the IRGCN’s boldness could have actually been in retaliation against Saudi Arabia. Tensions between the two geopolitical rivals has been high recently given Saudi Arabia’s campaign against the Yemen’s Houthi rebels. Marashi notes that the ship’s point-of-departure being Saudi Arabia supported this hypothesis.

Soon enough, however, Iran’s Fars News Agency reported that the reason for the seizure was far more mundane: the Iran Ports Authority had procured a court order to seize the ship. “The ship was seized after a relevant court order was issued for its confiscation,” stated an “informed” source that spoke to Fars. The agency added that that the ship was reportedly “seized for trespassing on Iran’s territorial waters in the Persian Gulf,” though a quick Open Source Intelligence (OSINT) assessment dispelled that fairly quickly. (The ship was bound for the United Arab Emirates port of Jebel Ali, from Saudi Arabia, according to Marine Traffic’s open source tracker.) The ship’s status, as of this writing, is noted as “at anchor” at Bandar Abbas.

In the wake of the Tigris incident, CNN learned that a U.S.-flagged ship had been intercepted by the IRGCN  –  on Friday, April 24, four whole days before the Tigris incident. Reportedly, the U.S. Navy Fifth Fleet issued a notice to commercial ships to exercise caution in the Persian Gulf and the Hormuz Strait following the incident.

The U.S. government’s reaction has to the incident has been somewhat underwhelming. State Department spokesperson Jeff Rathke noted, somewhat obviously, that “it’s a key concern of the United States to ensure that sea lanes in the region remain open and safe.” In a slightly more lively take, the U.S. Senate’s national security dynamic duo, John McCain and Lindsey Graham, chimed in as expected, issuing a statement in which they noted that the Tigris incident was “a serious and deliberate provocation against the United States and the international community.” They added, “This act is another display of Iran’s contempt for the rules-based international order and a threat to the freedom of navigation in one of the world’s most vital sea lanes.”

The Maersk Tigris‘ fate remains in flux, but it is already apparent that this episode will be cited by U.S. critics of the Iran nuclear talks. Iran’s brazen aggression in international waters is indeed worrying and a threat to principles that the United States holds dear, including the freedom of navigation. The administration will do its best to contain the fallout of this incident and avoid escalation with Iran lest it affect the fragile diplomatic rapprochement that seems to be budding between the two decades-long enemies. The coming days will offer an opportunity to better assess the significance of this anomalous but important event.

* Hat-tip to Jeffrey Lewis for highlighting the multi-national absurdity of the situation.

Iranian Navy Holds US Navy Sailors in the Persian Gulf

10 U.S. sailors were detained by the Iranian Navy on Tuesday after entering Iran's territorial waters.

So You Think You Can Provide Maritime Security...

China and Iran began a four-day naval exercise on Monday, focusing on anti-piracy and rescue operations.

Since Pelosi’s visit, the future of the cross-strait issue has surged toward military conflict, as the Chinese public started to dismiss the possibility of peaceful reunification.