Ten U.S. Navy sailors are being held by Iran’s Revolutionary Guard after their riverine patrol boats drifted into Iranian waters, apparently with technical problems. According to the Associated Press, the U.S. Navy boats ran aground on an Iranian island. The U.S. Navy vessels were traveling between Kuwait and Bahrain in the Persian Gulf before they lost contact, according to U.S. Department of Defense spokesman Peter Cook. According to Cook, U.S. officials have been in contact with Iran and “have received assurances that the crew and the vessels will be returned promptly.” U.S. Secretary of State John Kerry immediately spoke with his Iranian counterpart Javad Zarif after hearing of the incident. The United States and Iran do not maintain formal diplomatic ties but have increasingly open channels of communication at a high-level following the successful conclusion of a deal to restrict Iran’s nuclear program last July.

According to USNI News, the U.S. Navy operates small riverine boats regularly in the Persian Gulf. Tuesday’s incident reportedly involved the two boats drifting into Iranian territorial waters near Farsi Island (mapped below). Farsi Island hosts an Iranian Revolutionary Guard Corps naval base, perhaps explaining why the U.S. sailors were intercepted and held with little warning. It is unknown at this time if Iranian authorities attempted any communication with the U.S. sailors before taking them into custody. USNI also reports that “Search and rescue teams from the Harry S. Truman Strike group were scrambled to aid the crew but stopped short after the crew was taken by the Iranians.” 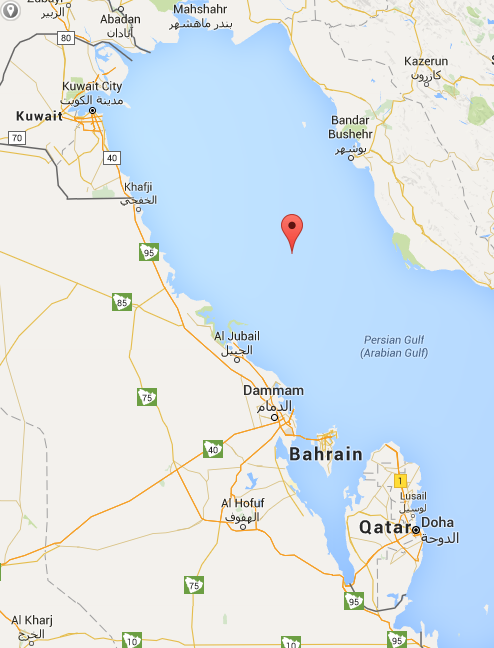 For now, the incident does not appear to be escalating and both sides are attempting to resolve the situation through diplomacy. Tensions between the U.S. and Iranian navies have been high in the Persian Gulf despite the nuclear deal. In December 2015, Iranian warships fired rockets as part of an exercise in relative proximity to U.S. warships, spurring concern that the event was a show of force. Despite the conclusion of the a deal to restrain Iran’s nuclear program last summer, the United States and Iran are far from normalizing relations.

Based on the facts currently available, it appears that the question of whether the Iranians responded proportionately will depend on if the U.S. Navy vessels were operating in Iranian territorial waters in compliance with “innocent passage,” a legal designation under the United Nations Convention on the Law of the Sea (UNCLOS) that Iran has signed but not ratified. Article 19 of UNCLOS outlines a range of activities that are permissible for military vessels in another state’s territorial waters. The United States, which has not signed the international convention, generally understands innocent passage rights in accordance with UNCLOS as a part of customary maritime law. (Indeed, readers at the Diplomat following U.S. Navy actions in the South China Sea may remember the salience of the “innocent passage” issue there.) For the moment, based on available information, there is no reason to suspect that the U.S. Navy vessels were conducting activities inimical to Iran or contravening innocent passage or that Iran’s intent in detaining the sailors is inherently hostile.

Update: According to U.S. officials that spoke to the Washington Post, the U.S. crew has not been ill-treated by the Iranians. “In some ways this has been very professional,” an official told WaPo.

Update: The sailors have been released by the Iranian Navy, according to the U.S. Navy.

The launch this week is likely to increase not just regional tensions but deepen existing difficulties with the United States.

The operation comes shortly after the unveiling of a new South China Sea position by the U.S. government.

Hong Kong Has Changed, But Britain’s Legal Community Doesn’t Seem to Realize It

The U.K. legal establishment must stop clinging to fictions about the state of the rule of law in Hong Kong.

China managed to convince enough states to narrowly defeat a motion to hold a debate on Xinjiang – the least intrusive form of scrutiny that the council could seek.

China’s Real Takeaway From the War in Ukraine: Grey Zone Conflict Is Best

The steep costs of Russia’s invasion of Ukraine will bolster China's continued use of its effective salami-slicing and grey zone tactics.