According to Djibouti’s president, Ismail Omar Guelleh, “discussions are ongoing” with China for a potential military base off the coast of the small African country, located on the strategically important Horn of Africa, along the heavily trafficked Bab-el-Mandeb Strait. The naval base will likely be set up in the port city of Obock, along the northern coast of the Gulf of Tadjoura.

According to Agence-France Presse, Guelleh added that China’s presence in the country would be “welcome.” If the negotiations are successful, Djibouti would become host to China’s first overseas military base. Per a February 2014 bilateral agreement, Djibouti gave the Chinese navy permission to use its naval facilities.

Hua Chunying, spokeswoman for China’s foreign ministry, was reluctant to discuss the topic in detail, when questioned on Guelleh’s comments by a report:

We have noted the relevant report. China and Djibouti enjoy traditional friendship. Friendly cooperation between the two sides has achieved constant growth over recent years, with practical cooperation carried out in various fields. What needs to be pointed out is that regional peace and stability serves the interests of all countries and meets the aspirations shared by China, Djibouti and other countries around the world. The Chinese side is ready and obliged to make more contributions to that end.

Djibouti is home to military bases for the United States, Japan, and France, among other states. Its strategic location makes it an important hub for global navies that seek to combat piracy off the Horn of Africa, in the Red Sea, and in the Gulf of Aden. The United States uses its base in Djibouti, known as Camp Lemonnier, to stage covert operations involving Remotely Piloted Aircraft (RPA) in Yemen, Somalia, and other nearby regions. Japan, meanwhile, stations just under 200 personnel there from its Maritime Self-Defense Forces for counter-piracy operations. 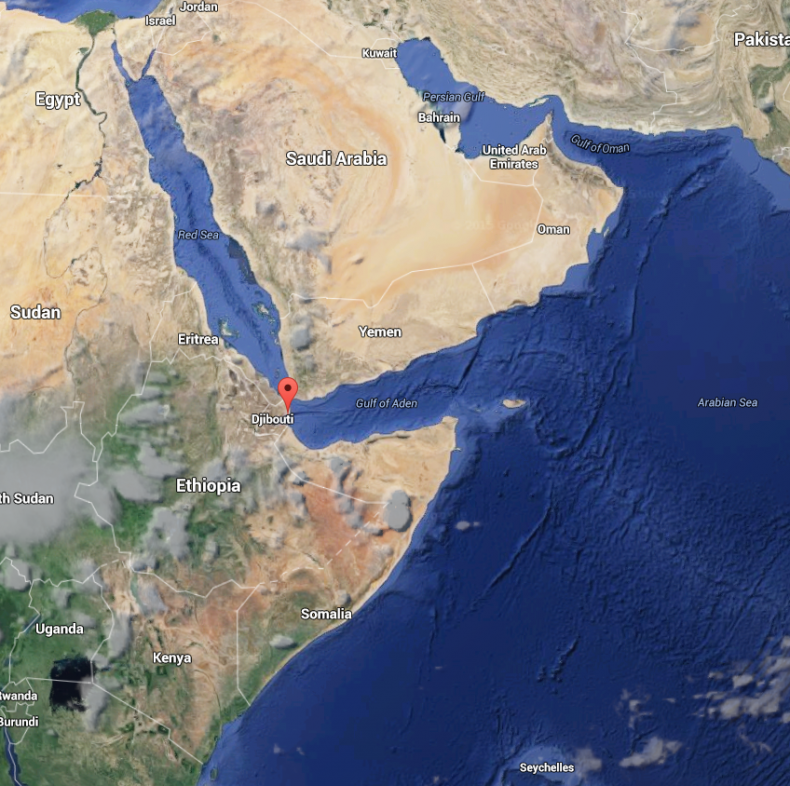 The location of Obock, Djibouti: the port city where China is expected to build its new base. (Google Earth)

Recently, in late March and early April, various Chinese People’s Liberation Army Navy (PLAN) vessels evacuated Chinese and foreign citizens from Yemen after the start of the Saudi-led aerial bombardment campaign there to Djibouti. China’s Linyi and Weifang missile frigates, and Weishanhu supply ship all participated in the evacuation.

As China’s navy grows increasingly global in its operations, it has cited anti-piracy operations as one of the primary drivers of its expeditionary activity. In addition to surface ships, last year China sent its Shang- and Song-class submarines into the Indian Ocean. Most visibly, the PLAN’s 17th and 18th naval escort taskforces, comprising various amphibious landing ships, missile frigates, and supply vessels, were sent to the Gulf of Aden last year. In December 2014, China dispatched the PLAN’s 19th naval escort taskforce to Somalia, and in April 2015, it sent the 20th taskforce.

Given the increasing frequency of PLAN operations in the region and the growing number of Chinese vessels transiting the waters off the Horn of Africa and the Arabian peninsula, a permanent military installation would help China support these missions. Beyond counter-piracy, however, a long-term Chinese military presence in Djibouti will likely cause alarm, particularly for the United States and India. The United States is concerned about China’s growing global military presence while India remains concerned about China’s ability to frictionlessly project power in the Indian Ocean.

China's defense ministry has confirmed that construction has started on its "support facilities" in Djibouti.

China's Naval Plans for Djibouti: A Road, a Belt, or a String of Pearls?

As China looks to Djibouti, it may be apparent that Beijing's "peaceful rise" is showing its claws.

The geographic reach of risk-acceptant Chinese military behavior appears to be extending.

The exercises come after the approval of a major U.S. arms package for Taiwan.