Terrorism in China has changed. Since 2013 a geographical expansion of Chinese terrorism has taken place both at home and abroad, along with a change in the type of targets and types of attacks.

Terrorist attacks have been spreading out of Xinjiang in recent years. From the 1990s to the late 2000s, the vast majority of terrorist acts were limited to Xinjiang, while the Chinese Uyghur terrorists were known to be based in Xinjiang and in relatively unstable neighboring countries such as Pakistan, Afghanistan, and in Central Asia. Recently, however, China has suffered attacks in several cities all over its territory. In the most symbolic attack, a car loaded with explosives crashed into a group of tourists under the portrait of Mao Zedong in Beijing’s Tiananmen Square on October 28, 2013. The most brutal attack occurred five months later, in March 2014, at Kunming railway station (in the capital city of Yunnan province) followed by two attacks at Guangzhou railway station (in the capital of Guangdong province) in May 2014 and March 2015. While the first attack obviously targeted China’s symbols of power, the following ones might be explained in relation to the failed attempts by Uyghur extremists to leave China via the southern borders and join terrorist networks abroad. 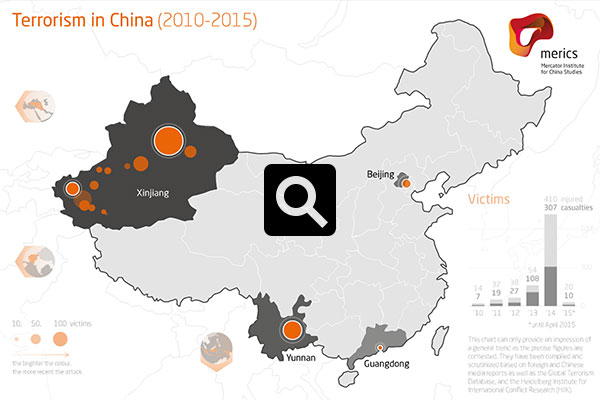 The geographical expansion of Chinese terrorism can also be observed outside of China’s borders, e.g. in Central Asia and the Hindu Kush region. Militant Uyghurs fought alongside the Taliban in Afghanistan and Pakistan against the Soviets in the 1980s and then against the international coalition (ISAF) in the early 2000s. However, more recently, in May 2014 the Islamic Movement of Uzbekistan urged all Taliban groups to target Chinese interests in the region, especially embassies, companies, and Chinese nationals.

The cooperation of Central Asian governments with Chinese authorities in extraditing undocumented Uyghurs, along with Chinese efforts to secure its porous western borders, likely caused Uyghurs to abandon the western migration route in favor of one to Southeast Asia in recent years. Since 2012 growing numbers of Uyghurs from Xinjiang have attempted to migrate illegally via Southeast Asia. They cross the Chinese border to Myanmar, Laos, or Vietnam and continue to Thailand, Cambodia, Malaysia, or Indonesia. Some look to join terrorist organizations while others seek political asylum elsewhere, eventually often settling in Turkey. In 2014 several instances were reported of Uyghurs being captured by authorities in Southeast Asia, or even being shot and killed by Chinese border guards.

The expansion of the Islamic State of Iraq and Syria (ISIS) has had a gravitational effect on jihadist movements worldwide, including China’s. Some Chinese Uyghurs joined the ISIS-related Mujahidin Indonesia Timur in Central Sulawesi, Indonesia. Indonesian authorities arrested four Uyghurs in September 2014 and another four in February 2015, with the latter group suspected of planning the Kunming railway station attack. Moreover, it is believed that since 2012 hundreds of Chinese Uyghurs have fled to Syria and Iraq via Turkey to fight against the Assad regime and have later joined ISIS. According to Chinese officials, several Muslim militants returning from ISIS war zones were arrested in Xinjiang in March 2015. At the same time, the Xinjiang party chief officially stated that China had become an ISIS target after several appeals from ISIS leaders for Chinese Muslims to pledge allegiance to the organization.

For years, terrorist acts in Xinjiang targeted symbols of Beijing’s authority, mainly local Communist Party of China (CPC) headquarters and police stations. In recent years, terrorist acts have increasingly targeted civilians — regardless of ethnic origin — in crowded public places. This was the case with the Beijing, Kunming, and Guangzhou attacks in 2013 and 2014. Other attacks in 2014 further confirm this trend: the attack on the Urumqi railway station in April killed three and injured 79; a car bomb attack on an open-air market in Urumqi the following month killed 31 and injured 94. The number of civilian casualties has increased dramatically.

Recent attacks have become significantly more numerous, more violent and more sophisticated. While most of the attacks were generally knife-wielding attacks, it appears that perpetrators are increasingly using explosives. This was the case with the Urumqi railway station attack and the Luntai attack in September 2014 that killed 50 and injured 54. Car bombings (Beijing 2013, Urumqi 2014), and suicide bombings (Luntai 2014) have followed. There has even been an attempt to hijack a plane, in Hotan in June 2012.

Marc Julienne is a Visiting Academic Fellow at the Mercator Institute for China Studies (MERICS), Berlin. Moritz Rudolf and Johannes Buckow are Research Associates at MERICS.

With the G20 leaders focused on terrorism after the attacks in Paris, China wants help in its fight against ETIM.

The Urumqi attack hints that the nature of separatism and terrorism in China is changing. So too must China's response.

Chinese state media are reporting another incidence of violence in Xinjiang.