China’s economic rise means that the world’s largest army now also has the resources of the world’s second largest economy. The security implications of this are discussed in the U.S. Department of Defence’s latest report, which highlights not only the sheer growth of China’s military, but also its sustainability. Although China still spends less on its military than the United States spends on its own defense forces, China’s far higher economic growth suggests it will be able to catch-up rapidly, with relatively little economic burden. This contrasts with America’s economic malaise and raises questions over the credibility of the U.S. security guarantees to Western Pacific allies and its pivot to Asia.

But the economics of growth are not quite so simple. Though China’s economy is indeed growing rapidly, this doesn’t mean you can get more of everything at the same rate. Some things become much more affordable, but other things may become more expensive. In particular, wages tend to rise rapidly and this affects costs in institutions that employ a lot of labour – like the People’s Liberation Army (PLA).

Thus, China’s military is likely to be suffering from what economists call “cost disease.” Rising wage rates mean it will face increasingly large claims on its budget, just to maintain the same number of personnel. Hence, a greater budget is required to supply the same level of services. If not, then the sector will be squeezed in real terms.

Anecdotal evidence that this is happening in China’s military can be gleaned from China’s defence White Papers. While opaque and incomplete, these nevertheless emphasise the need for increasing spending on social security, salaries and allowances to keep track with per capita incomes in the rest of the economy. As an example, defence analyst Dennis Blasko and his co-authors suggested that, in 2006, salary and pension and other labour cost increases may have accounted for half of the entire increase in the military budget.

A sense of the impact of rising wages can also be gained from the graph below, which shows the growth in manufacturing sector wages and in military spending in China and the United States. While China’s military spending is growing much more rapidly than that of the U.S., China has also had much faster wage growth. Thus, much of China’s faster spending growth may just reflect larger wage cost increases. 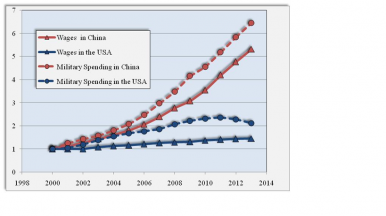 Symptoms and Causes of Cost Disease

Cost disease is usually associated with service sectors in wealthy countries, such as health care, or with countries undergoing resource booms, where it is known as Dutch Disease. In China, however, the cause of cost disease is the rapid productivity growth in the manufacturing sector.

This productivity growth raises the demand for labour and drives up wages. But it also directly reduces manufacturing costs. On balance, therefore, manufacturing prices remain stable with wage cost push being offset by productivity improvements.

For China’s military sector things are different. It is faced with the same increasing wages on the cost side, but does not necessarily benefit from the manufacturing productivity boom. Thus, the rate of cost increase experienced by the military sector exceeds the economy-wide average rate.

Unfortunately the usual method of adjusting military spending for price increases does not capture this effect. For example over the last 15 years China’s defense spending grew at approximately 14 percent a year, while military spending in the U.S. grew at approximately 5 percent per year. This implies a rather large difference in the growth rate of spending of 8.8 percentage points per year. But these are nominal spending rates and need to be adjusted for increasing prices.

The size of the adjustment for inflation then depends on which measure of inflation is used. The Stockholm International Peace Research Institute (SIPRI) uses the consumer price index (CPI). But the growth in the CPI is the same in the U.S. and China, about 2 percent per year. This implies that adjusting for inflation makes no difference to the estimated rate of catch-up.

The best index to use would be a price deflator for the defense sector. Unfortunately China does not provide this data. Nevertheless, using some publicly available data and economic theory, it is possible to calculate a relative military cost (RMC) index for China and the United States. This uses data on input prices for operations, personnel and equipment, and the expenditure shares of these budget headings, to construct an index of the relative cost of producing military services in each country.

This approach uses very limited data and shouldn’t be considered definitive. But it suggests that the economic burden of rapid military growth on the Chinese economy is much larger than generally thought.

Looking to the future, as long China is growing rapidly, the real relative cost of providing defence services is likely to grow as well. Moreover as China’s urban-rural migration rates slow, the rate of wage growth is likely to increase. Hence, though it is not chronic, the symptoms of cost disease may worsen before they get better.

Needless to say, exaggerating China’s real military spending growth is undesirable in the current climate of rising Asian military spending. China’s military rise is already triggering an escalation in territorial disputes, particularly in the East and South China Seas, and Singapore, India and Japan have all announced substantial increases in defence budgets. Thus, a careful analysis of the underlying costs and real growth of China’s military, and understanding the impact of rising wages on costs, is important for maintaining an appropriate perspective on China’s expansion.

In addition, however, rising wage costs also help explain China’s military modernization. While many aspects of China’s military transformation will reflect strategic decisions, they will also be influenced by price changes that accompany economic growth. One way the military can mitigate cost disease is to substitute away from labour towards equipment. Thus the PLA has reduced its armed forces from 2.5 to 2.3 million since 2000. As wages in China rise toward the same levels as those in the United States, we should expect it’s military to look more like America’s in terms of its relative use of equipment and soldiers.

So while it is possible to see modernization entirely in strategic terms, some aspects of this process will reflect simple economic choices as well.

Concerns about China’s intentions are intensified by the lack of transparency surrounding its growing military capabilities. The usual assumption is that China wishes to “bide its time and its strengths.” But by obscuring the details of its military budget, the only thing China appears to be hiding are cost blowouts.

This may also be a strategic decision as well. But double-digit growth rates in military spending create an image problem for a country that claims to want a peaceful rise. China could therefore do much to allay fears, without revealing any strengths, by being more forthcoming in it budget reporting. In the absence of that, we can help China to help itself, by more careful scrutiny of the economic data and better appreciation of the challenges of managing rapid growth.

Peter Robertson is professor of Economics and the University of Western Australia and has been a visiting Scholar at the University of Otago, The University of British Columbia, Rutgers University and The University of Oxford. His keys areas of research are economic growth, development and international trade, especially for Asian economies. He is the co-author of Measuring Hard Power: China’s Growth and Military Capacity (forthcoming). The author gratefully acknowledges the hospitality of St Anthony’s College, Oxford and the CSAE, Oxford University.

Numerous articles in Chinese state media suggest it has an ambitious agenda for its navy.

Each year, the PLA gets millions of new recruits. For a few weeks anyway.